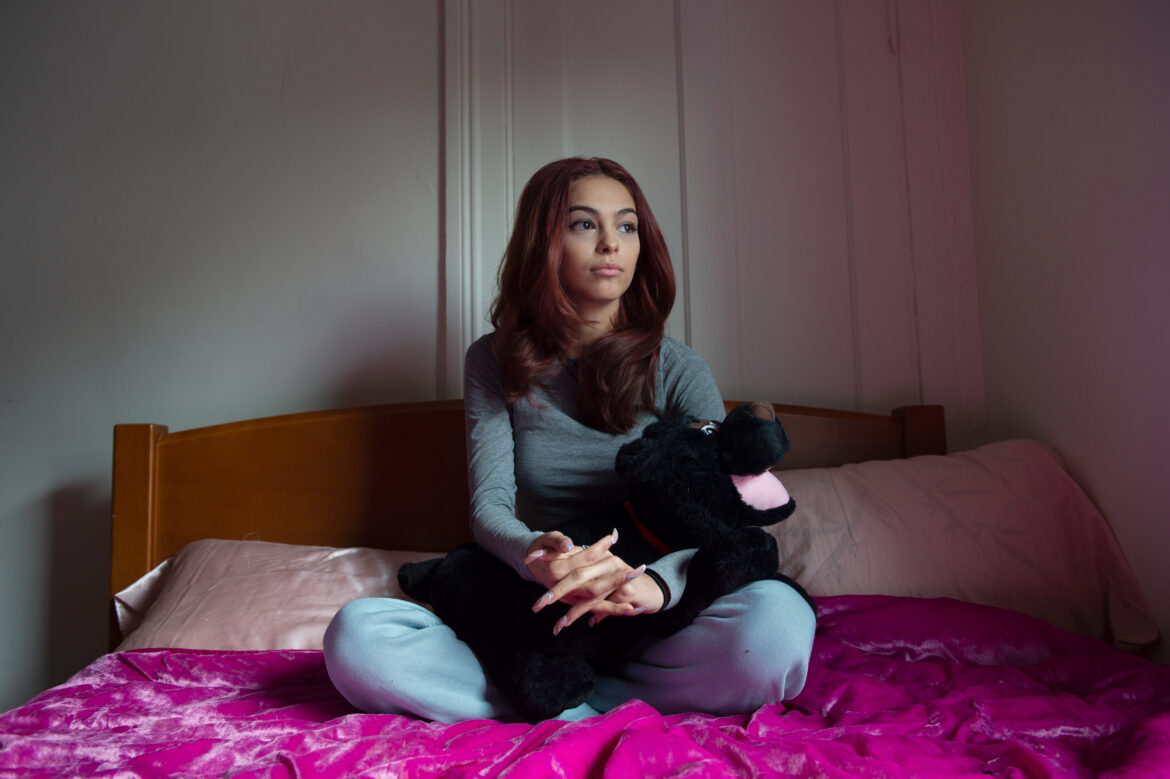 Emily Kendricks, 18, is now living in transitional housing, under the Department of Children and Families supervision. "There was a long period of time where I couldn't understand why DCF didn't help," said Kendricks.

Emily Kendricks has to eat soft foods, just like her grandfather. Although she’s only 18, she’s missing six teeth due to her parents’ dental neglect, advocates say.

Her mother ignored her, excluded her from meals, and did not return urgent calls from Kendricks’ school guidance counselor, so Kendricks left home and moved in with a friend’s family. Despite efforts to bring Kendricks’ case to the attention of the state Department of Children and Families (DCF) by that counselor and her friend’s mother starting a few weeks after her 17th birthday, DCF did not take Kendricks into state care until shortly before her 18th birthday.

“There was a long period of time where I couldn’t understand why DCF didn’t help,” Kendricks said. “I felt very alone. I didn’t know what to do. … There were so many times where I didn’t know if I should have just gone home and dealt with being ignored by my family.”

The closer to their 18th birthday that teens get, the harder they and their advocates have to work to prove neglect to DCF, according to lawyers with the Center for Children’s Advocacy (CCA).

Ken Mysogland, DCF’s external affairs bureau chief, said that the older the teen, the more proof DCF needs that they face imminent danger before DCF will bring them into custody. “The impact on the child may decrease as the child is older,” Mysogland said. “The 15-year-old is more vulnerable than the 17-year-old. We’re not making a determination simply because of the child’s age. We’re using age as a factor in our assessment.”

Three years ago, DCF changed its policy to reduce the number of children taken from their homes by increasing the wrap-around support services to families, including parenting classes, family therapy and referrals, Mysogland said.

But this does not excuse how difficult it is to get DCF to step in to help older teens, said lawyer Stacy Schleif, director of the Child Welfare Advocacy Project at CCA. 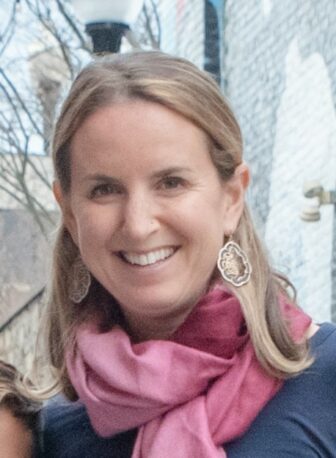 “Even if many of these kids can ‘fend for themselves,’ at age 16 and 17, couch surfing or finding a friend to stay with until they turn 18, that’s not a long-term solution to line them up for success in life. And in the meantime, they have no one to pay for their medical needs … or otherwise sign authorizations on their behalf.”

DCF data from 2010 to 2020 show reports of abuse and neglect involving teens decrease gradually between ages 15, 16 and 17, yet the average percentage of substantiated cases also drops each year. In that period, DCF substantiated 43% of reports of neglect for 15-year-olds, 40% of neglect reports for 16-year-olds and just 37% for 17-year-olds.

DCF straddles a line to balance parental rights with children’s welfare. “We have to prove that the parent has abused or neglected that child to the point where the child is not safe to be there. The proof of that is difficult,” said DCF Deputy Commissioner Michael Williams. “Safety and neglect are the determining factors. If a child is unsafe, uncared for, they can come into care before their 18th birthday.”

Then there are teens like Kendricks, who said she left home and moved in with a friend’s family in April of 2020 to escape neglect and emotional abuse. Her mother was angry with her and blamed her after Ashley Barton, her school guidance counselor, reported parental neglect to DCF in early April, she said.

Barton said she called Kendricks’ mother repeatedly to raise multiple concerns about her wellbeing, and her calls were not returned.

Kendricks said that after Barton contacted DCF, her mother ignored her and excluded her from meals, and she had little to eat. Her friend’s mother picked her up to spend the weekend in late April, and she ended up living in their Bloomfield home for more than a year.

Jennifer Torres, her friend’s mother, tried to get Kendricks’ parents to take her to the dentist so an abscessed tooth could be removed or to authorize Torres to take her, but they refused, Torres said. Torres asked a DCF social worker to intervene.

Within days of Kendricks’ moving into Torres’ house, DCF got involved, but the social worker would not respond to Torres, she said. The social worker “was only focused on the tooth. DCF was OK she was left here in my care in the middle of a pandemic. I couldn’t sign for anything,” Torres said.

By late May of 2020, Kendricks said, DCF staff persuaded her mother to consent to emergency dental care, and her infected tooth was removed. Since then, she has had a total of six teeth extracted because they were rotted due to dental neglect, she said. Hendricks needs extensive dental work but is awaiting government approval for dental implants, Schleif, the CCA lawyer, said.

Torres said she had to fight hard to get Kendricks the care she needed.

Torres, a mother of five, said, “I could change my mind tomorrow. They didn’t recommend going through the licensing procedure to become a foster parent. They didn’t ask whether I could afford to feed her. She needed new clothes, new shoes,” she said.

While DCF investigated and tried to work with Kendricks’ parents, Torres said, DCF left her on her own to try to help Kendricks. “She came with a lot of trauma,” she said. “I’m not equipped to help her. I’m not trained.”

The Village for Children and Families staff provided five free counseling sessions without parental consent under a temporary provision, but their requests for parental consent to provide further counseling and medications were disregarded, Torres said.

For months, Torres, Kendricks’ therapist and school guidance counselor tried to get DCF to take Kendricks’ case, Torres and Barton said. One DCF social worker “was really trying hard to get his supervisor to take the case,” Torres said. “Eventually, they took the case in late November of 2020, and it wasn’t until January of 2021 that they filed [a petition with the court] to take custody.”

Meanwhile, Kendricks said, she fell into a depression and lost a lot of weight, dropping to 89 pounds. 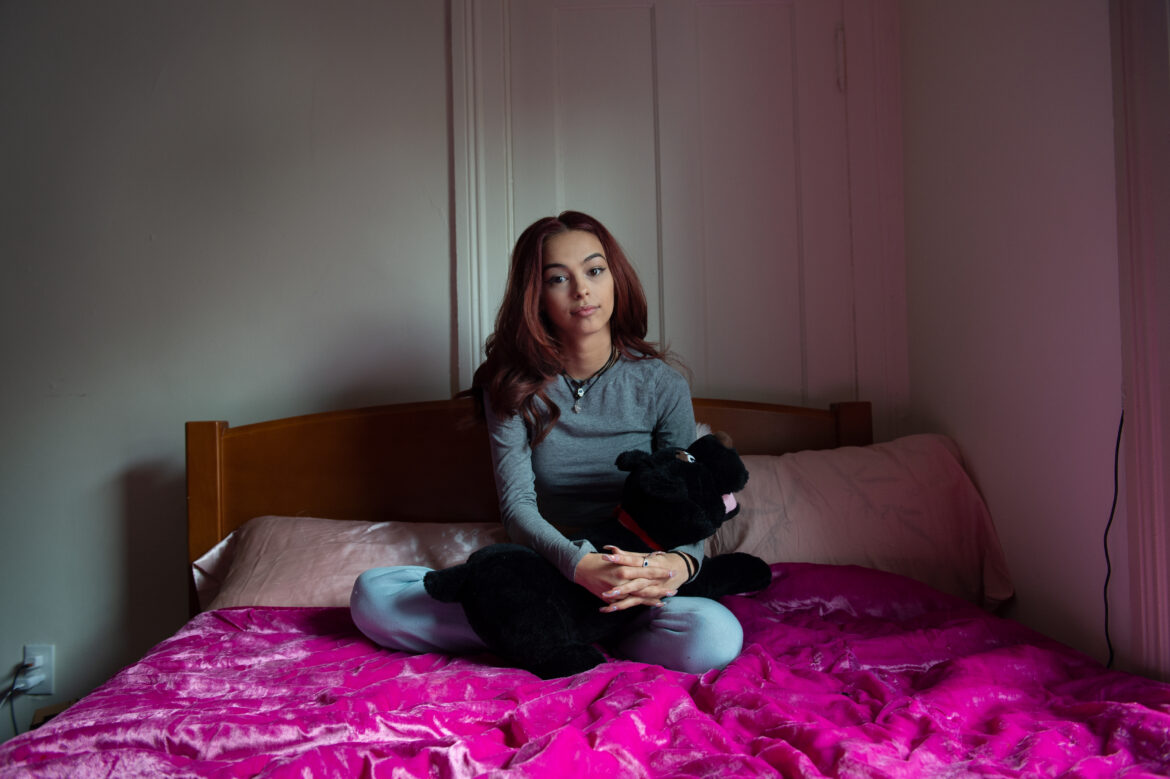 Kendricks is now attending cosmetology school while under DCF’s supervision.

Kendricks is grateful the state petitioned a court to sever parental rights and take her into state custody because it ended nearly a year of uncertainty. Still, she wishes it hadn’t taken so long.

“I feel like they could have stepped in sooner,” she said. “My family had so many run-ins with DCF.” Her parents relinquished their parental rights without a fight, Barton and Hendricks said.

Teens like Kendricks are entitled to a stable home. If they don’t know where they’ll be sleeping, that affects their education and mental health, said Martha Stone, executive director of the Center for Children’s Advocacy.

“When we call DCF, in cases where older teens left home because of some kind of abuse or neglect, that’s when DCF will sometimes say ‘No, they’re going to be turning 18 very soon; we’re not going to get involved.’ We ask them to open a case. The problem is the older kids sometimes fall through the cracks. They don’t open a case because they don’t have foster homes for older kids, or they don’t have a place to place the kid. A lot of times, the kid finds a place to stay,” Stone said. “There’s no person or legal guardian to sign for them for their health, mental health or education.”

Schleif said, “If a child is reaching out asking for assistance, that’s not someone who I think should be turned away. I appreciate that DCF doesn’t take children away from families easily. It seems inexcusable to not get involved sometimes.”

There are always going to be children, like Emily Kendricks, she said, who are better off under DCF care.

Barton is still in touch with Kendricks and is glad she’s attending cosmetology school and living with other young women under DCF’s supervision in a program that supports young adults while they’re in school.

She’s grateful the teen had an advocate like Jennifer Torres. “Thank God for Jennifer,” Barton said. “I don’t know what Emily would have done without her.”

Correction: An earlier version of this story had Emily’s last name wrong. Her name is Emily Kendricks.