Robert Carmon had a rough start to life. Shortly after birth he developed asthma, a chronic disease that causes inflammation in the lungs and difficulty breathing. His attacks were so severe as an infant that his parents rushed him to the emergency room practically every week. They were terrified he might die.

Today, at age 7, Robert’s asthma has stabilized. With the help of his dad, Chaz Carmon, he inhales a steroid-based medicine each morning and evening, and he carries a rescue inhaler in his backpack in case an asthma attack comes in school or elsewhere. 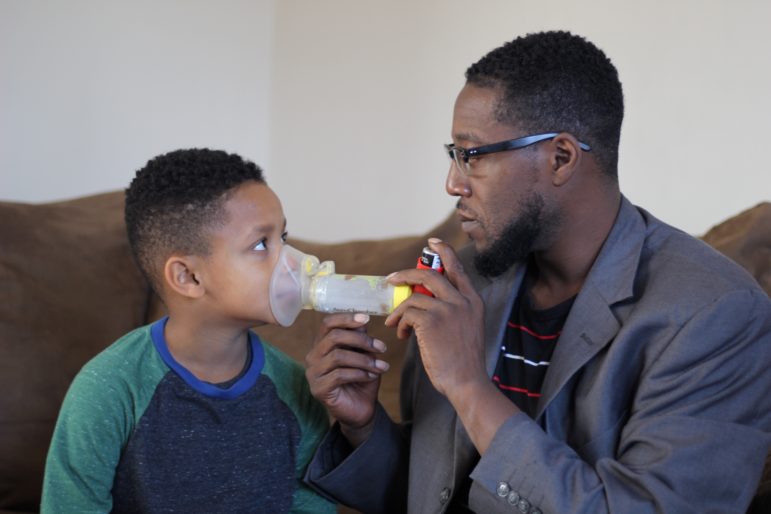 Robert is a bright and energetic child, yet he’s not able to play organized sports because of his asthma. “It’s hard on him,” says his father. “I just hope he grows out of it.”

Asthma, one of the most widespread chronic conditions in the United States, afflicts approximately 26.5 million people nationwide, or about 8.3 percent of the population. The cause is not known and there is no medical cure. The disease disproportionally affects people who live in economically disadvantaged urban neighborhoods. In New Haven’s Newhallville and Dixwell neighborhoods combined (the Carmons live in Newhallville), an estimated 17 percent of residents report asthma, more than double the national rate, according to the Community Alliance for Research and Engagement (CARE).

Connecticut’s asthma rate is worse than the nation’s. It’s 11 percent for children and 10.5 percent for adults—and rising. Neighborhoods in Bridgeport, Hartford and New Haven are among the hardest hit. Automobile exhaust, cigarette smoke and mold and vermin in sub-standard housing are among the triggers. “Your ZIP Code matters. It’s a determinant of health,” said Marie-Christine Bournacki, coordinator of the asthma program for the Connecticut Department of Public Health.

In Hartford’s North Meadows neighborhood, for instance, asthma in children from birth to age 4 accounted for 1,738 visits to hospitals per 10,000 residents in 2016, according to DataHaven. In comparison, the rate in Madison, a wealthy coastline town, was just 78. The median household income in Madison is $108,231; while in North Meadows it’s $20,434.

Leaders of government and health care say the key to making progress in working class neighborhoods is to focus more effectively on some of the medical, social and environment factors related to the disease, and to better coordinate society’s responses. Dr. Beverley Sheares, associate professor of pediatrics at Yale School of Medicine, said: “In these settings, asthma is a symptom of what it means to live in poverty so really you have to change the lives of poor people.”

When children suffer severe asthma attacks, their parents often take them straight to the emergency department (ED) of the nearest hospital. That’s the right thing to do, say emergency medicine physicians, because it’s difficult for parents to gauge the seriousness of an attack.

At Connecticut Children’s Medical Center in Hartford, emergency physicians treat from 1,500 to 2,000 children per year for moderate to severe asthma. Guidelines for treating asthma in the ED are well established, and the liquid steroid medications they administer stay in the body for up to 72 hours, making it less likely that kids will suffer another attack right away.

In the past year, Connecticut Children’s introduced a new process for treating patients more quickly—by having nurses engage with them soon after they arrive. Previously, it took an average of 75 minutes to treat asthma patients. Now it’s 34 minutes—and the goal is 20. “Kids come in struggling to breathe. To be able to immediately treat them and see a quick turnaround is pretty amazing,” said Eric Hoppa, a pediatric emergency attending physician at Connecticut Children’s.

But emergency physicians say more effective treatment of asthma in the ED is not the long-term solution to the problem. EDs can stabilize people and provide instructions on how to use inhalers and other medications, but they can’t follow them home to monitor their health, to make sure they’re using inhalers correctly, or to spot asthma triggers in the home. That’s why neighborhood clinics and outreach programs are so important. 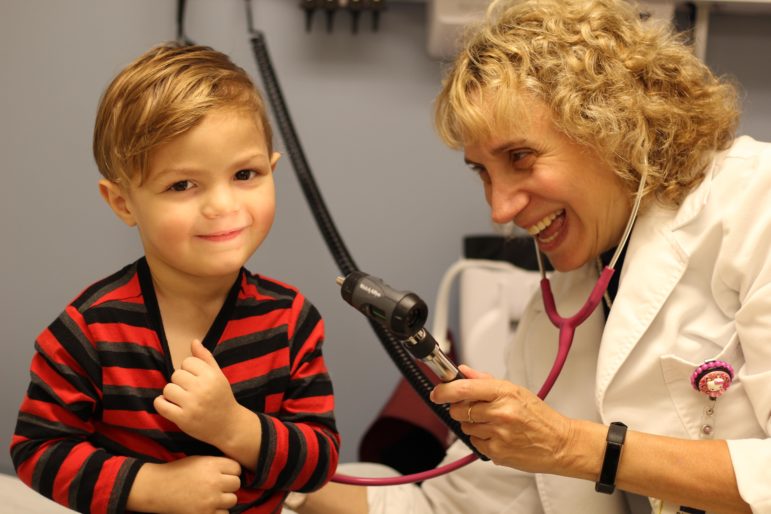 Economically disadvantaged people typically seek care at community health centers, and Connecticut has a strong network of centers operating in 38 cities and towns. Recently, some of the centers have begun establishing specialized asthma clinics so they can spot the disease earlier, treat it more consistently, and help patients manage it over the long term.

In New Haven, Fair Haven Community Health Care  opened its new Respiratory, Airway and Allergy Clinic (RAAC) in June.  It’s staffed by a physician who is certified in treating allergy and asthma, an occupational health specialist, a nurse and a care coordinator who investigates the social determinants of each patient’s asthma. The goal is to help them make adjustments in their lives that will reduce triggers. All of the health center’s patients diagnosed with asthma, and those who show signs or symptoms, are referred to the clinic, which is one of a few of its type in greater New Haven.

Asthma can impact children’s lives catastrophically. “If they’re not treated properly, they miss a lot of school; they sit at home and play electronic games and don’t socialize; and they don’t go outside to exercise and get fresh air,” said Dr. Pamela Kwittken, the physician at Fair Haven’s RAAC clinic.

That’s why it’s essential for children in particular to have asthma action plans. These take-home documents describe the treatment the patient requires routinely and what to do if they experience a severe attack. Fair Haven began routinely creating action plans 1½ years ago and now more than 50 percent of the childhood asthma patients have them.

The next step for the Fair Haven clinic is forging a formal partnership with Milford Health Department’s Putting On Airs, part of Connecticut’s home asthma education program, which helps asthmatics and their families follow action plans and reduce the triggers in their homes. 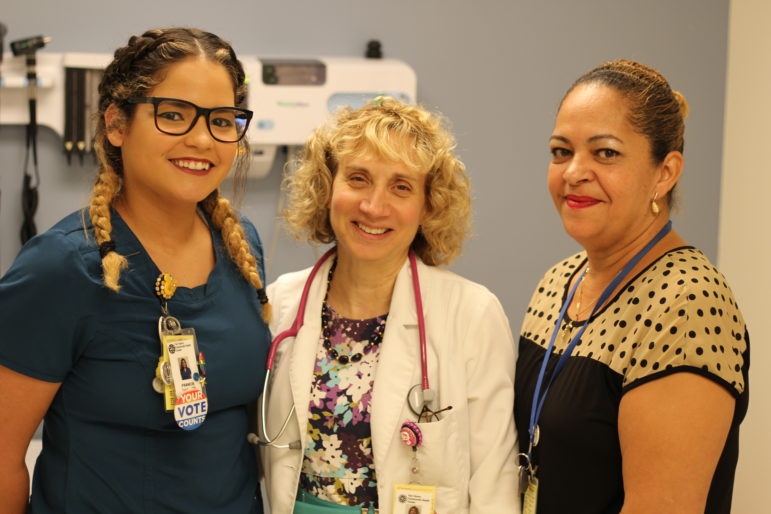 Under Putting On Airs, teams of health workers conduct a series of three home visits with asthma sufferers. The teams typically include a health educator, who makes sure inhalers and other medications are being used properly, and an environmentalist, who looks for dust-mite-infested carpets, moldy bathrooms, mice and cockroaches.

Recently, the regional team at the Stratford Health Department, which runs Putting on Airs for much of Fairfield County, added a third member—a community health worker. Two other health districts elsewhere in the state will follow suit in the coming months.

The community health worker on the Stratford team, Millie Seguinot, helps translate between English and Spanish during home visits, explains the use of inhalers in simple language, and looks for social issues that impact a family’s ability to control the asthma. In addition, she refers families to social service agencies for food and clothing—and helps them make arrangements with their children’s schools.

One Bridgeport family kept canceling appointments with Putting On Airs. Language was an issue. Seguinot visited the mom on her own and learned that she didn’t understand the asthma action plan nor how to administer medications for her daughter on a regular basis. After Seguinot explained things carefully and helped with scheduling, the mom was able to follow the plan and became more comfortable with additional visits from the team. “It’s important to have somebody that these families can relate to. It might be language, culture, ethnicity or even physical appearance,” Seguinot said.

One of the reasons for Connecticut’s high rate of asthma is that much of the urban housing stock is more than a century old, and many urban people live in rentals (72 percent in New Haven). Old buildings tend to harbor asthma triggers, such as mold and dust mites, and landlords are often reluctant to replace carpets where dust mites hang out, or to repair faulty exhaust fans.

It’s not feasible to replace all of the substandard housing, but with advice from the Putting On Airs teams and support from city health departments and doctors, people can pressure their landlords to improve conditions.

Alice Rosenthal, staff attorney for the Center for Children’s Advocacy, recounts a success story in New Haven that provides a blueprint for others. A 12-year-old boy with severe asthma lived with his mom and two siblings in a rundown apartment where grimy old carpets covered the floors. His mom vacuumed the carpets frequently and even paid to have them steam cleaned, but it wasn’t enough. She asked repeatedly for the landlord to remove them. No go.

Finally, after the boy’s primary care doctor, a pulmonologist and Rosenthal wrote letters urging the landlord to take action, he did so. “Now, the boy is not missing school and, because he’s healthier and using less steroids, he can get outside and play sports,” Rosenthal said. Plus, because the mom doesn’t have to be at home all the time, she’s now working—and the family is doing much better economically.

Rosenthal coordinates a partnership with Yale New Haven Children’s Hospital where the two organizations collaborate on addressing the social determinants of health.

There’s no magic bullet for addressing asthma, or poverty either. For now, government and health care leaders agree, the key is increasing awareness of what can be done to prevent asthma attacks or respond to them. With adjustments in living situations and proper health care, asthma doesn’t have to keep kids—and their parents—living in misery and fear. They can all breathe easier.

Please note: At the time of the publication of 2016 Community Health Needs Assessments, the DataHaven analysis of hospital encounter data was only available for certain towns and zip codes, while other data are available for towns statewide or by region.