As more states like Connecticut legalize cannabis, there’s been a sharp rise in use by women, data show.

Stats complied by Flowhub, a cannabis tech company, report that from early 2020 to late 2021, cannabis sales to female customers increased by 55%. When it came to new customers, 48% were female in 2021, a 10% increase from 2018, when the study was first conducted. 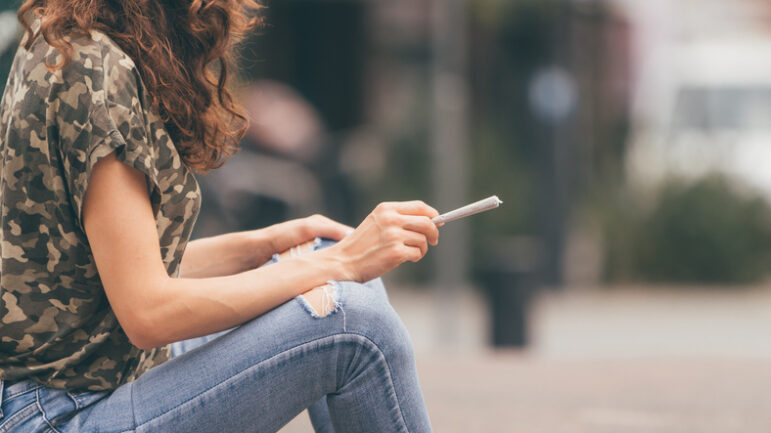 Women sometimes use cannabis to cope with depression and anxiety.

Americans are now smoking more marijuana than cigarettes, Gallup reported. In a 2022 Gallup poll, 16% of Americans currently smoke marijuana, while 11% reported smoking cigarettes, which is a new low compared to the mid-1950s, when 45% of Americans smoked cigarettes.  According to the Centers for Disease Control and Prevention (CDC) marijuana, which can also be called cannabis – was used by 48.2 million people in 2019.

A study published in 2016 that examined gender differences with cannabis use reported that most women used cannabis for pain relief and were more likely than men to use it to treat a range of symptoms, including anxiety, pain, depression, nausea, and spasticity. Spasticity is a condition where muscles tighten or stiffen, which prevents normal fluid movement.

Reasons for using cannabis differ from person to person. Niqs Islam, 22, said, “My relationship with cannabis has been an enlightening one. I feel like cannabis has allowed me to explore a lot of aspects of creativity, relaxation, mental clarity, and focus.”

The 2016 study also found that while men were more likely to use and become dependent on cannabis, women progressed more rapidly from first use to cannabis use disorder.

While more people are talking about their cannabis use, many women still feel the need to hide it because of the stigma that surrounds using cannabis. In 2017, Van der Pop, a cannabis company tailored to a female audience, released a report stating that 66% of women were hiding their cannabis use. There is a lack of female representation in the cannabis industry and in cannabis research, which may change as the country continues to legalize its usage, the report said. 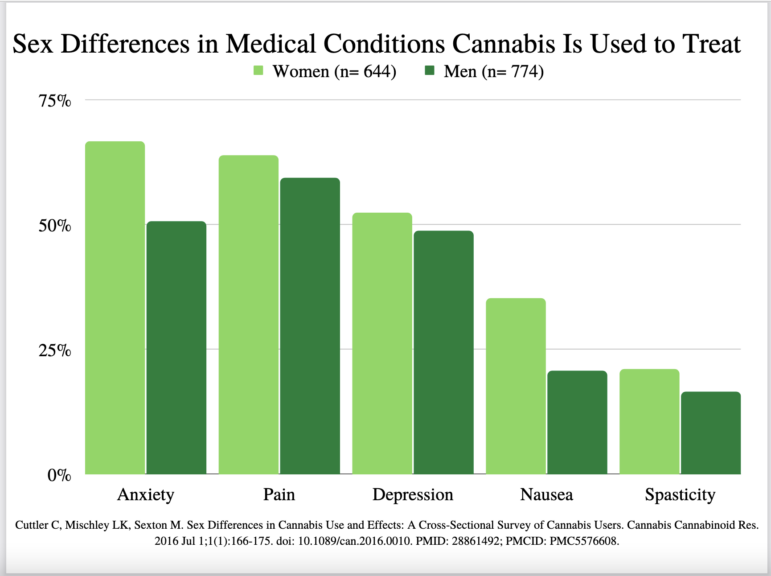 Negative attitudes attached to cannabis use stem from a wide variety of social factors, ranging from concerns about it being a detriment to employment, to religions that prohibit its use, and stereotypes attached to those who use cannabis, studies say.

When Islam initially used cannabis, she felt she needed a justification for it but now feels differently. “It’s brought a ton of different positive effects in my life, and I’ve stopped thinking about whether or not I needed a reason or justification to use it. I know at the end of the day, everyone chooses how to live their life the way they please. For me, that just includes cannabis in the whole mix of other things I like to do.”

As of October 2022, recreational marijuana use is legal in 19 states, Washington D.C. and Guam, and medical use is legal is 38 states, but, on a federal level, it remains illegal and is considered a Schedule 1 substance. This contributes to the stigma, which may explain why many Americans are still split on whether its use is beneficial.  Based on another 2022 Gallup poll, 49% of respondents believed cannabis had a positive effect on society and 50% believed cannabis had a negative effect on society.

Of 750 respondents, 61% said legal adult-use cannabis has been positive for Massachusetts, 25% remained neutral, and 13% said it has been negative.

As Connecticut moves to recreational sales, Gov. Ned Lamont recently announced the launch of an educational campaign to encourage responsible cannabis use by adults. Topics will include on how to safely store and dispose of cannabis and what to do if a child or pet consumes cannabis.

The state approved the use of medical marijuana in 2012. The qualifications for receiving a medical card largely relegated access to those with debilitating medical conditions such as cancer, glaucoma, Parkinson’s disease, Multiple Sclerosis, and Post Traumatic Stress Syndrome (PTSD).

Retail cannabis sales may begin later this year in the state.

Ariana McNulty graduated from the University of Connecticut in 2021 with a bachelor’s degree in Journalism. She enjoys writing about health, wellness and women’s issues.  To reach her, email arianamc22@gmail.com

6 thoughts on “Cannabis Use On The Rise Among Women”