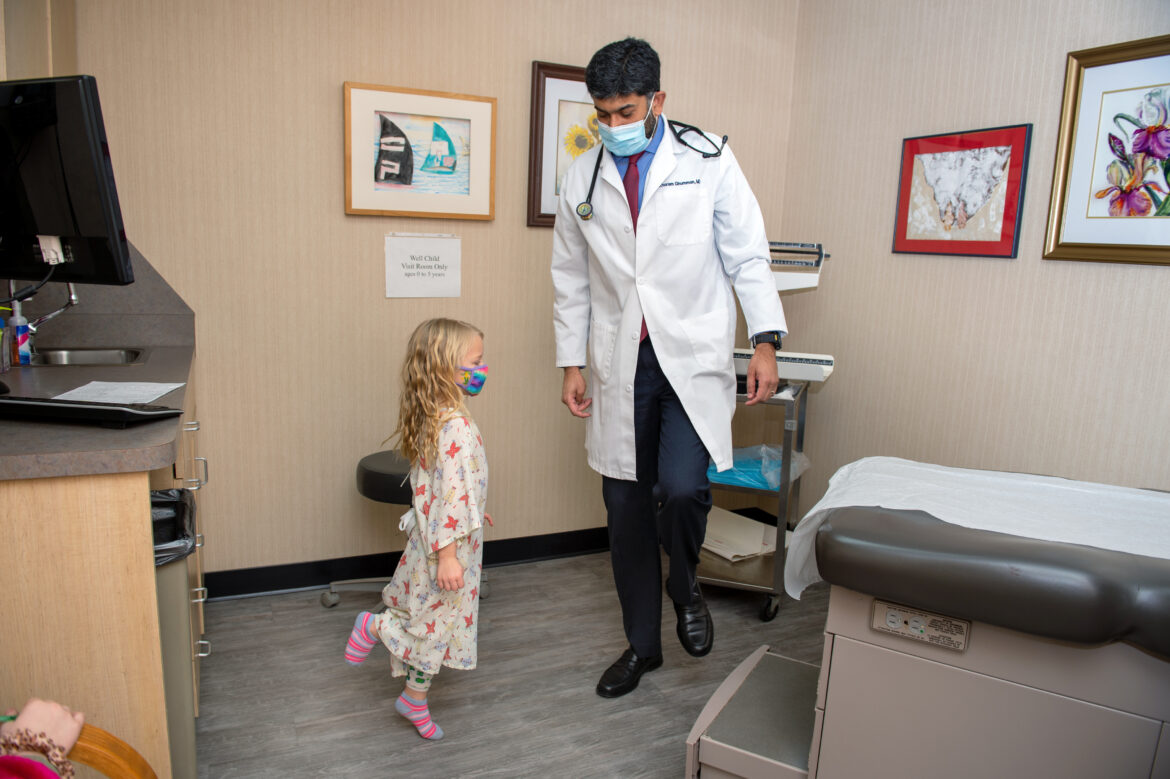 Dr. Khuram Ghumman asks patient Tully Zorick, 5, to hop on one foot during a checkup at East Granby Family Practice, LLC where he is in private practice. Dr. Ghumman takes care of the entire Zorick family.

In Connecticut, hospital health systems range from large groups, like Yale New Haven Health Services and Hartford Health Care, to systems owned by one hospital, like UConn Health. They are all non-profit except Prospect CT Medical Foundation, a for-profit company which owns Waterbury, Manchester and Rockville hospitals.

There are other medical systems as well, such as ProHealth Physicians, owned by Optum, a division of the company that owns the insurer United Healthcare. Private equity firms have also invested in medical practices, including orthopedic and emergency medicine groups.

An area of active practice acquisition is primary care, at a time when demand for preventive health care is rising along with an aging population.

Hospital health systems say that they provide improved, streamlined and coordinated care because primary care providers and specialists can work together and have easier access to patients’ medical records.

But studies report that acquisitions are driving up the cost of health care and doctors lose the freedom to manage their own scheduling. 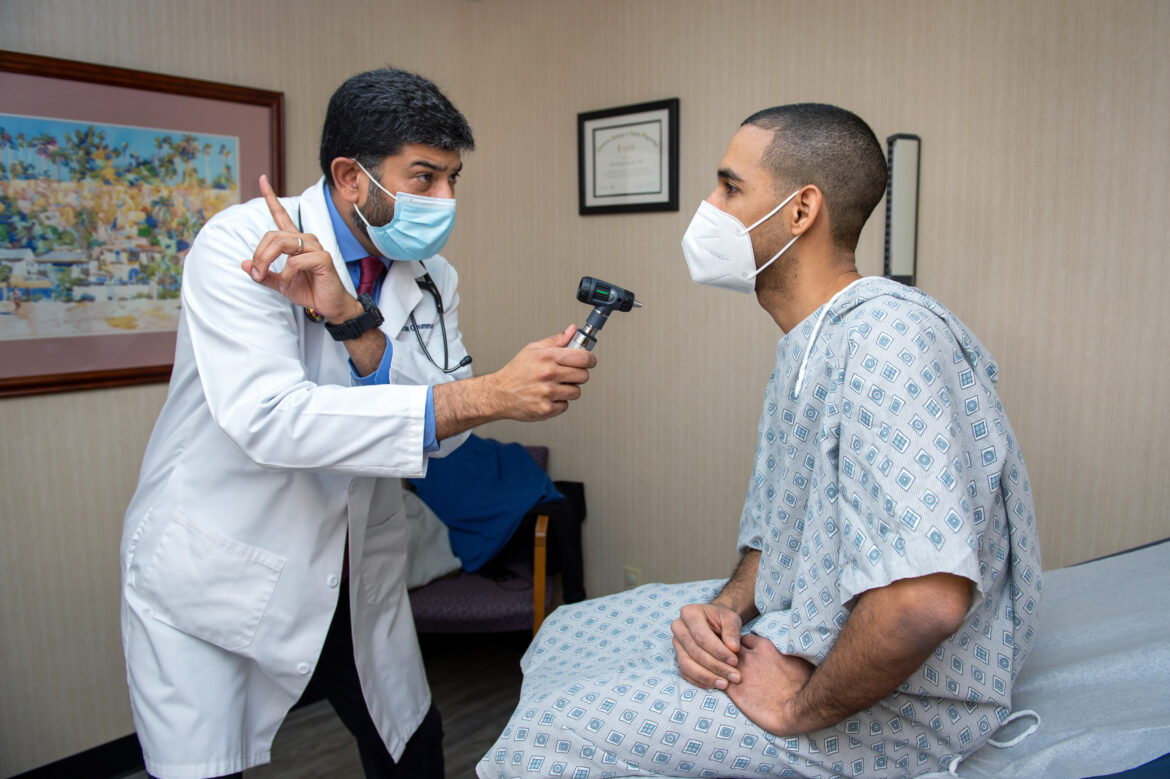 Dr. Khuram Ghumman directs patient Carlos Padilla where to look as he checks his eyes during an annual physical.

Ghumman, who practices in East Granby, said he spends an hour with patients on physical exams and a half-hour on follow-up visits. “I just want to pose the question to physicians: who do you work for?” he asked.

Miller said she prefers her autonomy, is comfortable with the way she runs her practice, likes the intimacy of it and the ability to give patients the choice of going to a solo practitioner.

Dr. Andrew Wormser, a New Haven internist affiliated with Yale’s Northeast Medical Group, said “there is some lack of autonomy,” but added “they still give us enough that we can practice the way we want to.”

Wormser is part of the Connecticut Medical Group, established by a group of physicians in the 1990s to pool resources. He explained that a more complex regulatory climate and the resultant need for investment in electronic medical records prompted the sale of the practice to Yale in 2012.  Under the arrangement, the 31 physicians are contractors, not employees, but Yale owns the business. “The hassles of running the office are no longer there, which is a lot,” Wormser said.

“What’s required of a primary care practice today is very different from what was required 20 years ago,” he said.

Regulatory and insurance requirements necessitate “an amount of staffing, technical expertise and capital that independent practices just can’t raise by themselves for the most part, or it’s very difficult,” said Kastenbaum, whose organization provides loans and technical assistance to primary care providers.

Financial losses and costs connected to practicing medicine during the COVID-19 pandemic has exacerbated pressures on private practitioners, said Dr. Gary Price, president of the national Physicians Foundation and a Clinton plastic surgeon. “COVID made a bad situation much, much worse,” he said.

Independent practices are also threatened because young physicians don’t want to run businesses. They want to be employees focused on practicing medicine and having a balanced lifestyle, said Victoria Veltri, OHS executive director.

The OHS is spearheading a project to increase spending on primary care in an effort to improve health, control long-term health costs, improve access to and quality of preventive care, and address social determinants of health. A 2019 report on 29 states put Connecticut at the bottom of primary care spending, defined as physician care in offices and outpatient settings. The report by the Patient-Centered Primary Care Collaborative and the Robert Graham Center found Connecticut spent 3.5% of its health care spending on such primary care between 2011 and 2016. 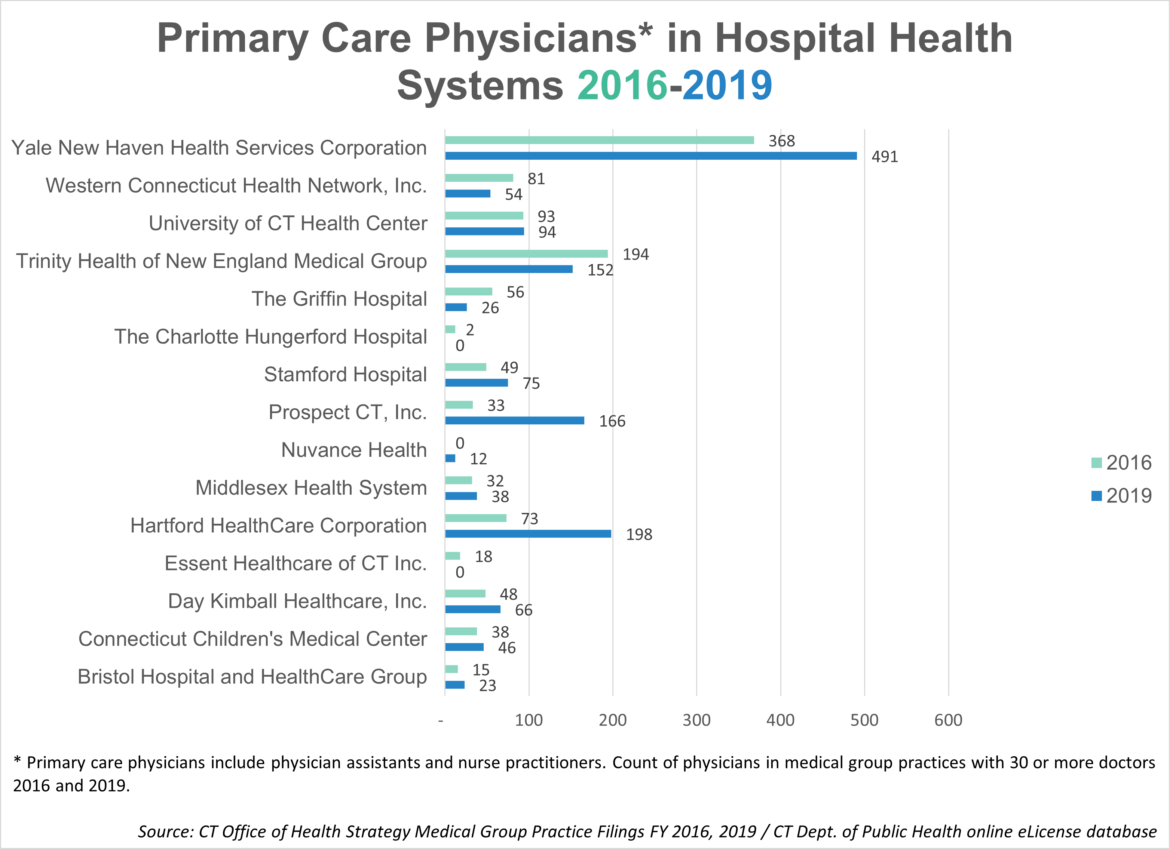 She said that there is growing interest in “team-based care” to address a range of patient needs. That means that primary care practices could include, for example, social workers and pharmacists in addition to medical practitioners.

This is occurring at a time when shortages of primary care physicians are projected through 2033, new doctors are turning to more lucrative specialties to help pay for medical school debt, and Connecticut is having a difficult time attracting doctors. According to an Association of American Medical Colleges report using 2018 data, Connecticut ranked 41st in the country in retaining doctors who either attended medical school or trained as residents in the state.

Meanwhile, a proposed law would give the state more oversight over medical practice acquisitions by allowing state review for acquisitions of any size, instead of the current minimum of eight physicians. It would also remove the existing presumption of approval.

Hospitals and physicians opposed the proposal at a recent legislative hearing. Dr. Jeffrey Cohen, head of clinical services for Hartford Health Care, said his system acquired 30 practices with less than eight physicians in the past three years, adding that there are “few medical practices with eight.” He warned that independent doctors could go out of business waiting for the reviews to be conducted.

In a statement, the Connecticut State Medical Society said that many small group medical practices are barely surviving, but said, “it is not in the purview of the legislature to dictate under what circumstances physicians may decide to sell their practices.”  The medical society said that the state should focus instead on issues that burden independent physicians, such as insurance coverage contracts that don’t allow doctors to negotiate rates, exclusionary policies and high malpractice rates. 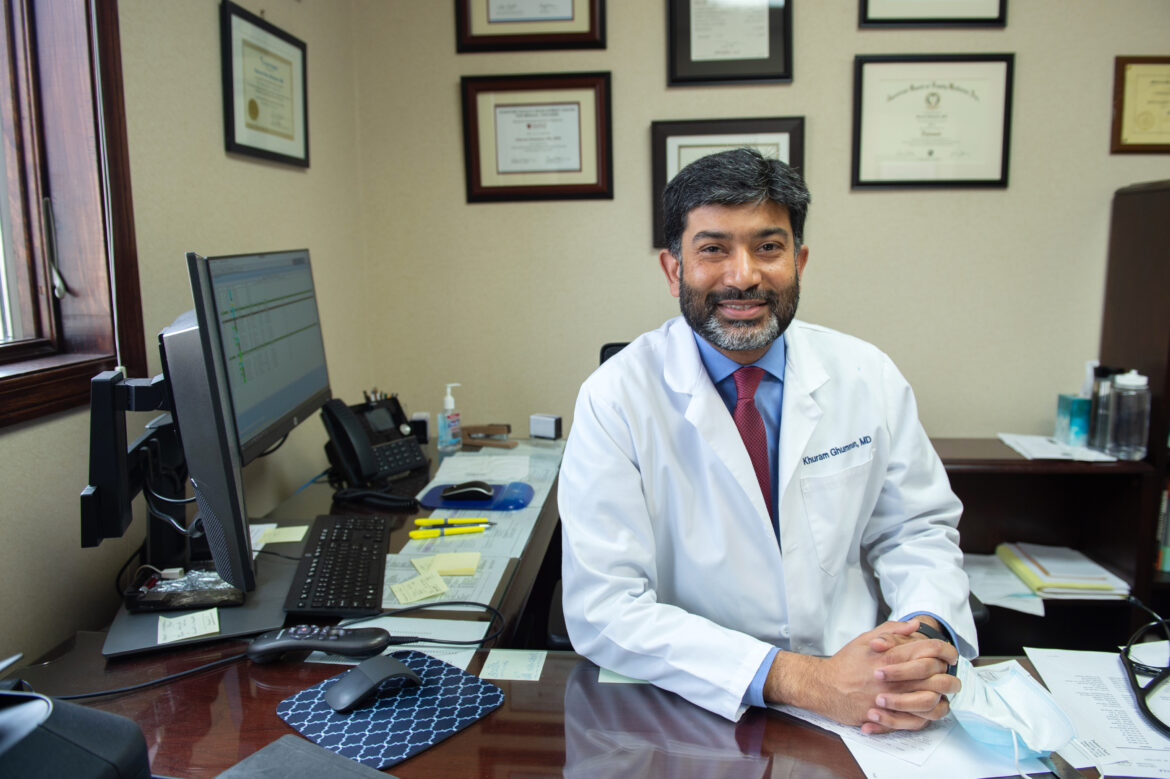 Dr. Khuram Ghumman in his office in East Granby.

Managing His Own Practice

Ghumman said he is spared many administrative tasks because of his practice’s structure, with seven physicians, five nurse practitioners, a physician’s assistant, and sufficient office staff to handle business operations. “If you have systems in place that are working for you and your patients, you can still do without having to be a part of a large corporate system,” he said.

He compared the current health care landscape to when most independent pharmacies were pushed out of business by competition from chains, eliminating the choice of going to a small pharmacy.

“If you lose the ability to make choices in health care, that’s a sad day for everyone—not just doctors, but patients,” he said.