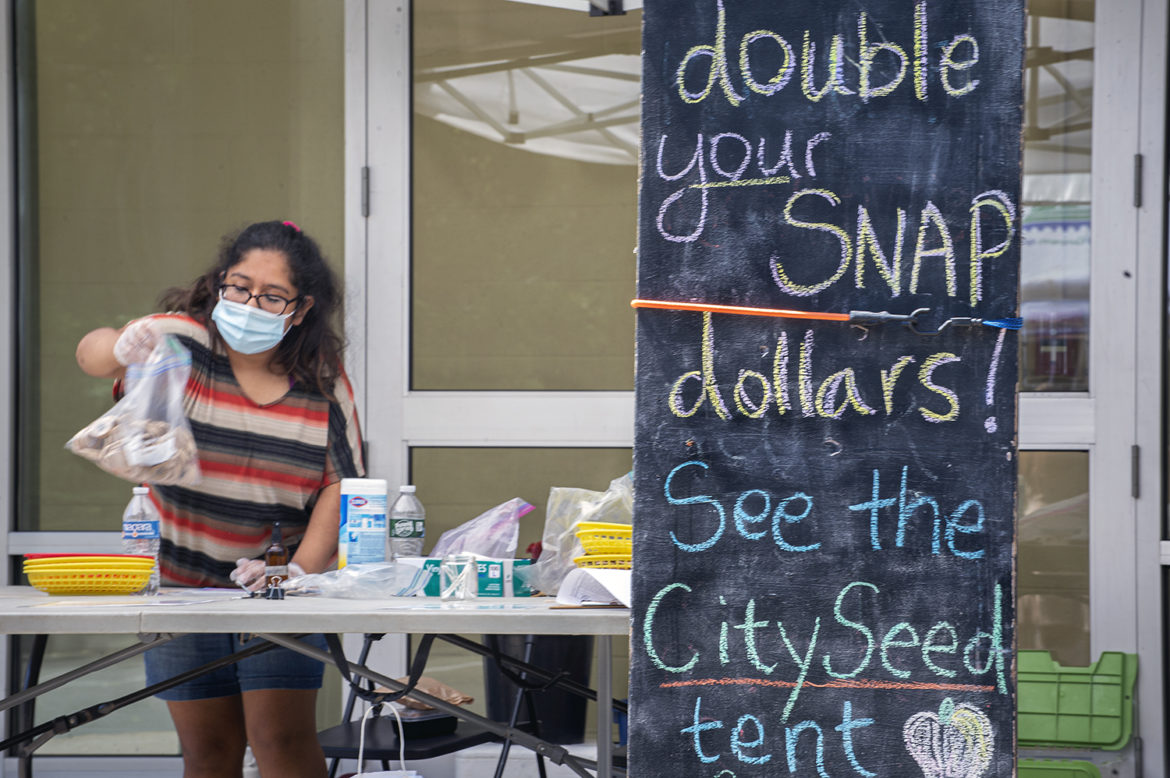 Sandy Flores of City Seed puts away a bag of $1 tokens at the close of the Wooster Farmers Market. Snap recipients can scan their EBT cards and receive two dollars in tokens for each dollar to spend at the market. Money is also doubled for seniors and WIC recipients.

Obesity affects people of color at higher rates: more than 30% of Hispanic adults and more than 35% of Black adults are obese, compared with 25-29% of white residents, the Centers for Disease Control and Prevention reports.

Many factors have contributed to the obesity crisis: lack of access to healthy food, socioeconomic factors, a car-oriented culture, and food marketing, said Marlene Schwartz, director of the University of Connecticut Rudd Center for Food Policy & Obesity. She said the center studies “how we can use policy to change the food environment. You can’t expect personal responsibility and willpower to be enough to overcome all the factors in the environment.”

Former Rudd Center researcher Rebecca Boehm led a study in 2018 that found 68% of greenhouse gas emissions from food production came from industrial farming and manufacturing, 30% of which was from animals.

“A majority of the emissions are coming from the production phase,” said Boehm, who now works for the Union of Concerned Scientists. 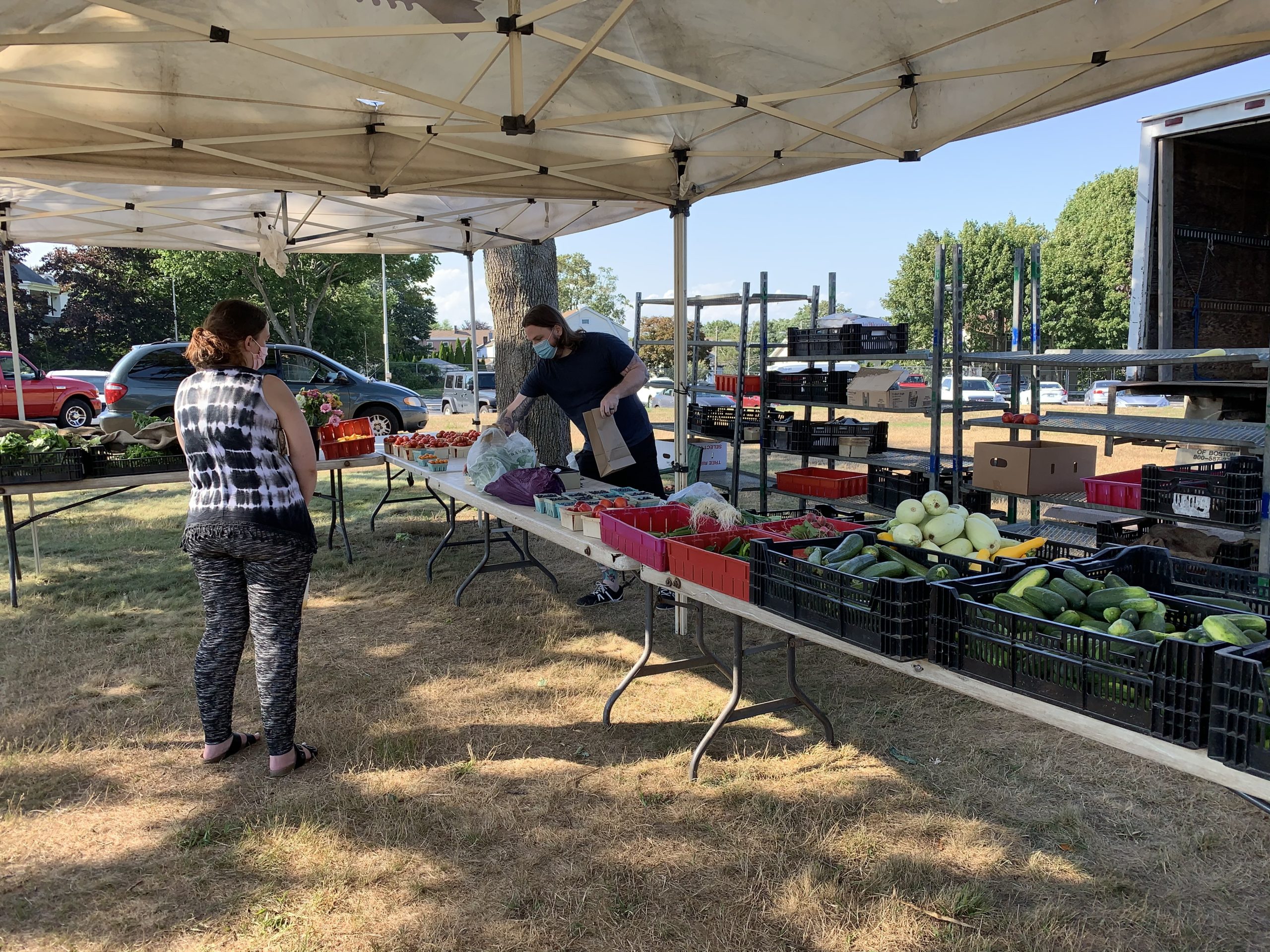 Cole Riemer staffed the Smith's Acres table in August at the Field of Greens Farmers Market, New London. The market, like many in the region, aims to make fresh produce accessible to city residents. Christine Woodside Photo 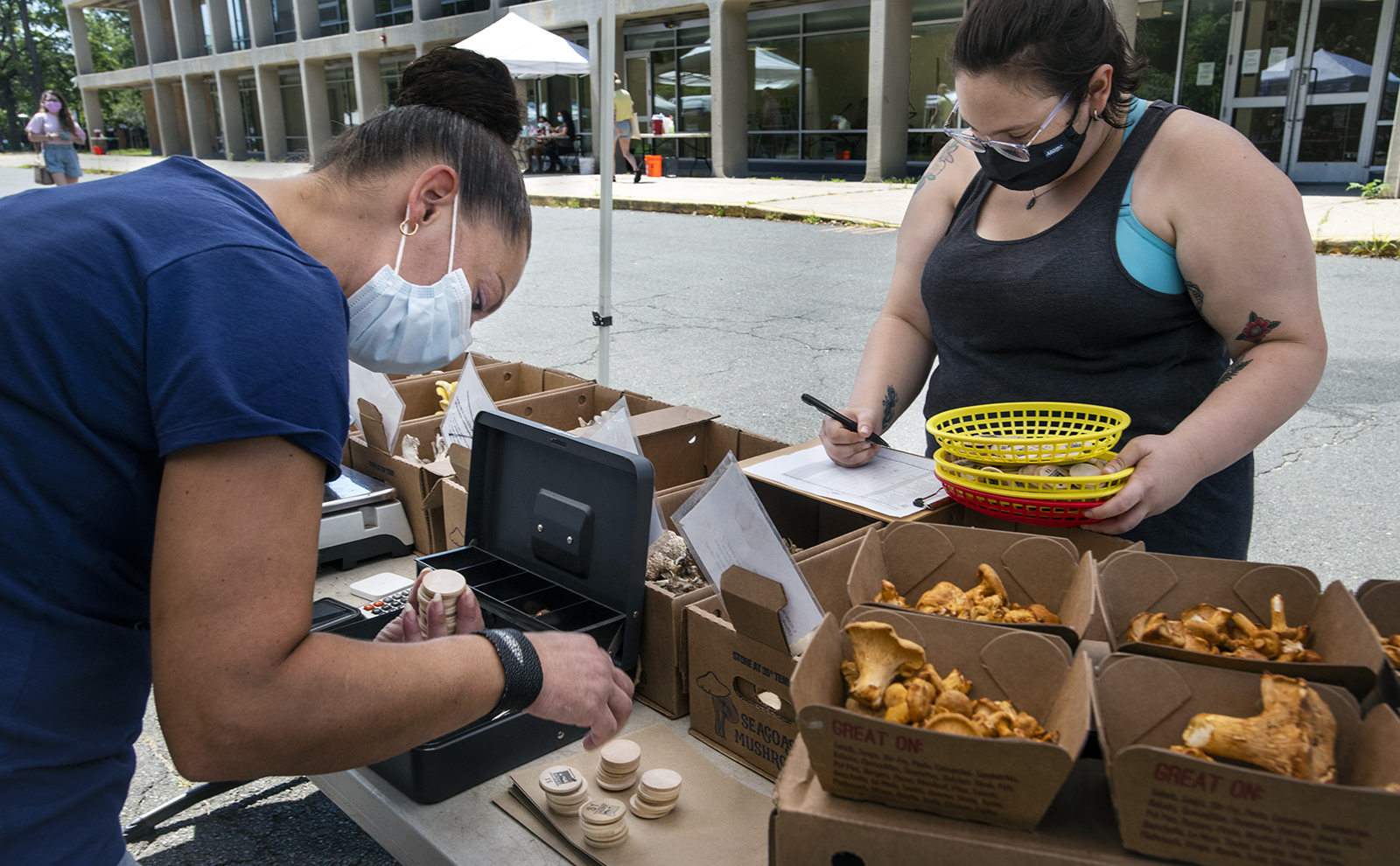 Heather Bonelli (L), of Seacoast Mushrooms (Mystic) counts up her tokens at the close of the Wooster Farmers Market. At right is Farm Market manager, Alyssa Gant. Melanie Stengel Photo 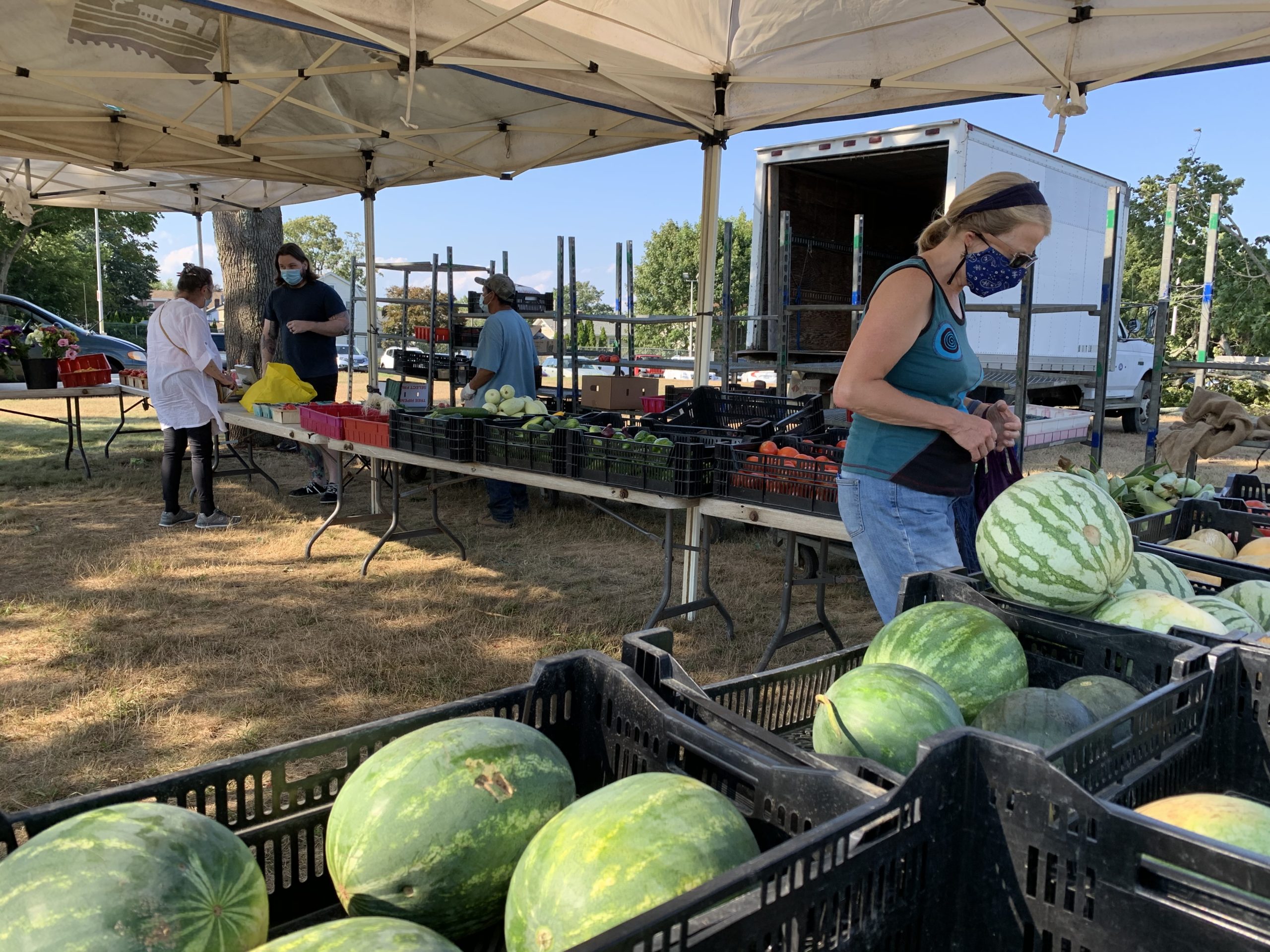 The Field of Greens farmers market in New London is open on Wednesdays through October. Christine Woodside Photo. 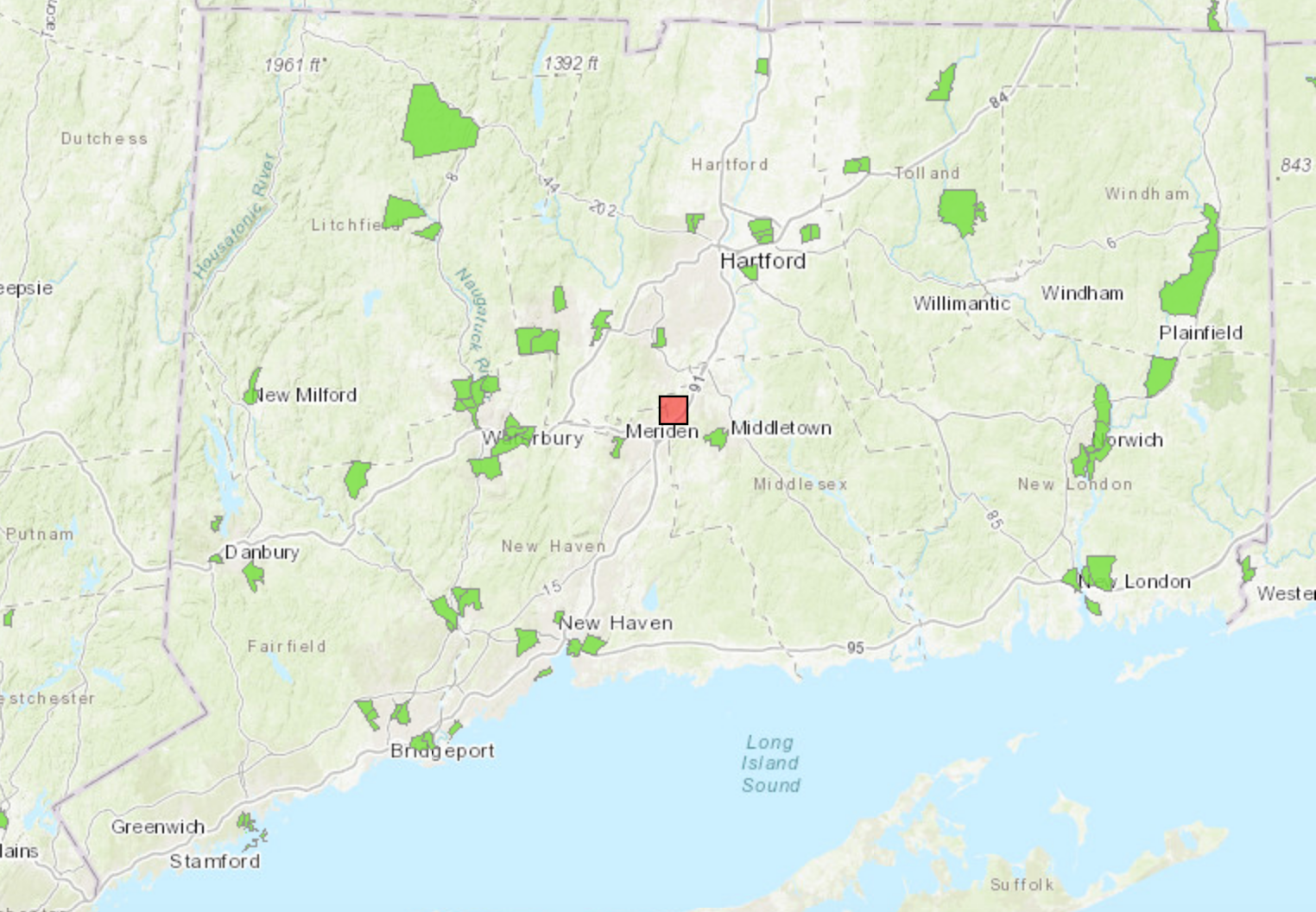 Food deserts in Connecticut are the shaded green areas.

(Scroll through the photo gallery)

Boehm’s research showed that “consumption activities of all kinds create greenhouse gas emissions, and food is one of those integral parts of our lives that’s a consumption activity. It’s less obvious than the emissions coming out of your car. It’s a little hard to think about and conceptualize because the food system is so complex.”

In Connecticut, small farms have been working for many years to help those who live in cities and some rural areas far from markets get affordable fresh produce.

Teri Smith of Smith’s Acres in East Lyme said she started selling produce in downtown New London about 35 years ago and expanded to Stamford, Bridgeport and a dozen more farmers markets. She said part of the work was talking to customers about how to use what she was selling. “I was amazed at the mothers and the children who would come in and ask questions about vegetables: ‘Why is this cucumber curly? The cucumbers at the grocery store are straight. Why are the beans different sizes? What can I do with Brussels sprouts?’”

She added, “That was the best part of doing the markets in a place like New London or Stamford, talking to the people. You can buy $10 worth of apples and go home and make applesauce and freeze it for your baby. How about this butternut squash, how about cooking and mashing them up and saving them and you have baby food for a year for your baby?”

Staying healthy has become even more challenging during the pandemic. Just getting out, running errands, and getting exercise has gotten more complicated or even impossible for many people, especially those who live in food deserts. In cities, food deserts are where markets are more than a mile away and in rural areas where they are 10 or more miles away. Connecticut’s food deserts are mostly in its cities.

Thirteen years ago, to help those who live in food deserts, Connecticut farmers markets in cities began doubling coupons from federal assistance programs like Women, Infants, and Children (WIC) and the Supplemental Nutrition Assistance Program (SNAP). These programs are designed to help people living at 130% of the poverty level and below afford produce and other healthy food. Of Connecticut children between 2 and 4 years old whose families participate in WIC, 14.4% fall in the obese range.

The SNAP and WIC discounts at farmers markets were the project of the Connecticut nonprofit Wholesome Wave, which formed in Bridgeport in 2007. It pushes for better federal benefits for low-income people. Its co-founder, Michel Nischan of Fairfield, is a nationally recognized leader in bringing locally grown food to the underserved.

Wholesome Wave’s first initiative was boosting SNAP benefits at farmers markets. Today, the initiatives started with private donors in 2007 are part of the federal Farm Bill. Two years ago, Congress designated the Gus Schumacher Nutrition Incentive Program, which gives states grants to make fresh produce easier to buy. It’s named for Wholesome Wave co-founder August Schumacher, a local food advocate who served as the Massachusetts agriculture chief from 1984 to 1990 and USDA undersecretary of agriculture for farm and foreign agricultural services from 1997 to 2001.

A dozen farmers markets across Connecticut—including in Bridgeport, Hartford, New Haven, Stamford and Willimantic—now double SNAP benefits with support from UConn Cooperative Extension. They issue tokens or coupons for fruits and vegetables that can be spent that day or later. Wooster Farmers Market manager Alyssa Gant, left, settles up with Kyle Tamo of Rose’s Berry Farm, Glastonbury. Gant has baskets of tokens that she collects from the vendors. In the background is Elpidio Trejo-Ramirez.

CitySeed’s farmers markets and stores in the New Haven area have one of the highest redemption rates of food assistance in the state, said Cortney Renton, its executive director. Last year, CitySeed redeemed $63,000 in SNAP, WIC and Senior Farmers’ Market Nutrition Program coupons at its markets and stores.

Renton said many activists have begun referring to food deserts as “food apartheid.” They believe the lack of access to healthy food grows out of broader policies that need to change.

Wholesome Wave co-founder Nischan said his desire for policy change dogged him from his early career as a chef. A native of Chicago, he spent childhood summers helping out on his grandfather’s small Missouri farm. “The farm was in a state of decline for a long time because food policy made it really hard for small family farms,” Nischan said. He struggled in the 1980s and 1990s to incorporate fresh produce into restaurants where he cooked in Milwaukee and New York. Then, 25 years ago, Nischan’s son was diagnosed with Type 1 diabetes, so good nutrition became even more important to his family.

For the past decade, Wholesome Wave has been working with hospitals to subsidize fresh produce purchases after prescribing their patients nutrition counseling. “What we are trying to prove is if we invested Medicaid dollars in prevention [like good food], it might cost less than treatment,” Nischan said.

Healthy food “should be an essential right for every American, regardless of income,” he said.