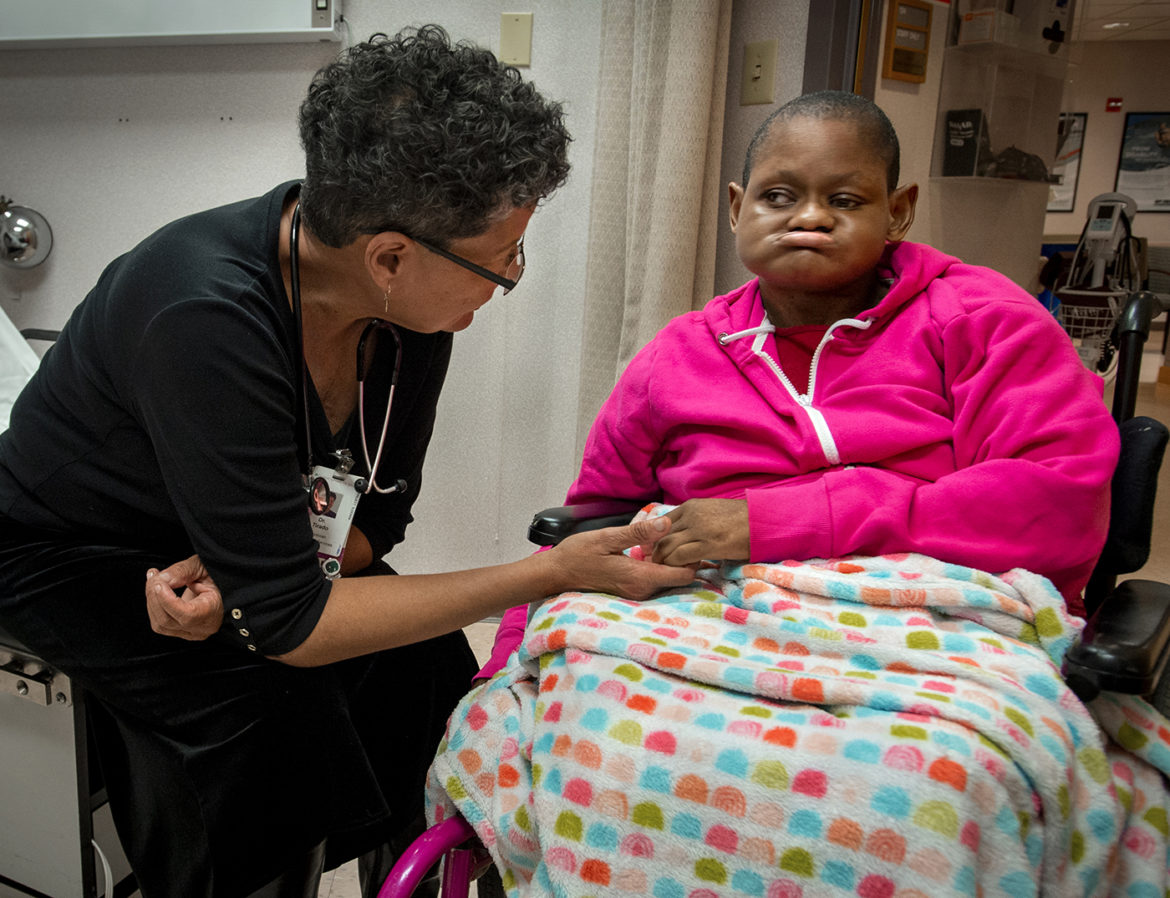 Over the past 20 years, Connecticut women with cognitive or physical disabilities have found their way to the Gaylord Specialty Healthcare’s Gynecological Clinic for Women with Disabilities in Wallingford. There, obstetrician-gynecologist (ob-gyn) Anna Tirado provides routine and preventive gynecological care to disabled women.

Now nearing retirement age, Tirado isn’t sure what will happen when she no longer sees patients. “I am very worried. The patients are not going to be easily absorbed into a private practice,” she said.

An estimated 207,100 female residents of Connecticut have at least one disability, according to U.S. Census Bureau data. The disabilities range from barely noticeable to those that render women unable to see, speak, move freely, or make sound decisions. But no matter the type of disability, all women need access to gynecological health care.

But there are obstacles to getting care, and Tirado’s concerns are valid. Most ob-gyns receive little to no medical education or training on how to provide care to patients with disabilities. Nor do they get fully reimbursed for the lengthy time required to gain the trust of patients with disabilities and an understanding of their health needs. (Tirado spends up to an hour with new patients). And while experts say that research and awareness around individuals with disabilities have increased dramatically in recent years, for too many women with disabilities, access to quality gynecological care remains a matter of persistence.

Elaine Ricciardi of Milford understands the level of trust in their doctor required by patients with disabilities. Her daughter, now 55, was born with a condition so rare it was nameless; it resulted in intellectual and developmental delays, blindness, and seizures. Ricciardi’s daughter has been a patient of Tirado’s for over 10 years. Ricciardi, who founded Pathfinder Associates Inc. in Derby in 1980 to provide supervised homes for adults with intellectual disabilities, also has sent many of her clients to Tirado. “Dr. Tirado has a very special way about her. She makes patients comfortable, and has a tremendous amount of patience,” Ricciardi said. “They end up being able to get physical exams, which they all desperately need.”

Tirado recalled one patient with developmental disabilities who hadn’t seen a doctor in 20 years. “Unless you handle it right, a gynecological exam can be very traumatic to these patients,” said Tirado.

Depending on the level of cognition, Tirado said, a patient may not understand why an exam that feels physically intrusive is taking place. Tirado said that patients with disabilities are also much more vulnerable than the general population to sexual assault. For these reasons, Tirado explains to patients everything that is going to happen during a physical exam prior to conducting it.

Tirado, whose regular job is as a gynecologist with Branford-based County Obstetrics/Gynecology Group, says her own medical history—aggressive treatment for  leukemia as an adult resulted in physical limitations—gave her a deeper empathy for the challenges that prevent women with disabilities from accessing gynecological care. When Gaylord’s spinal cord unit decided to launch an outpatient gynecological clinic to serve women, they tapped Tirado because of her professional expertise and personal experience. 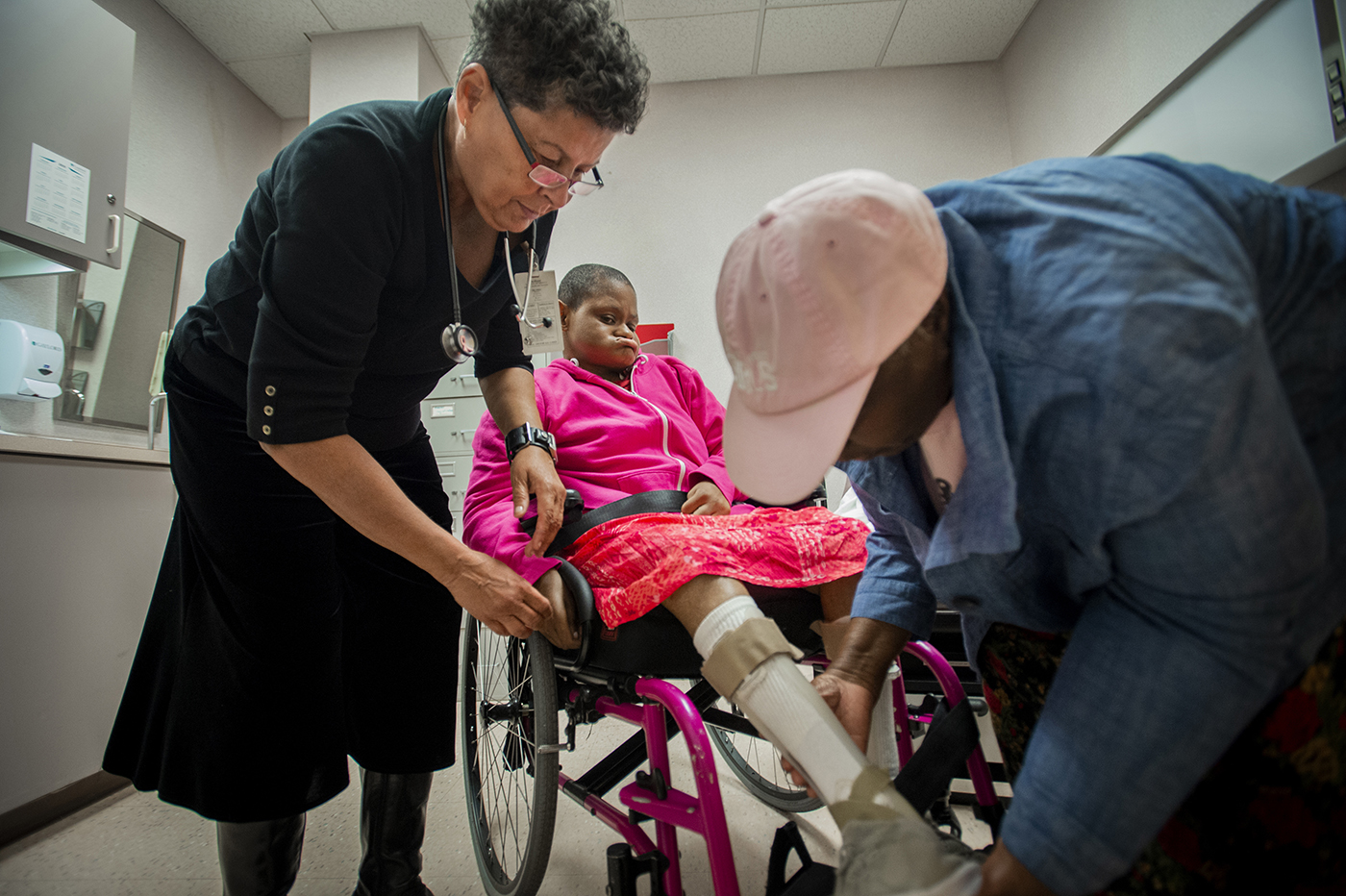 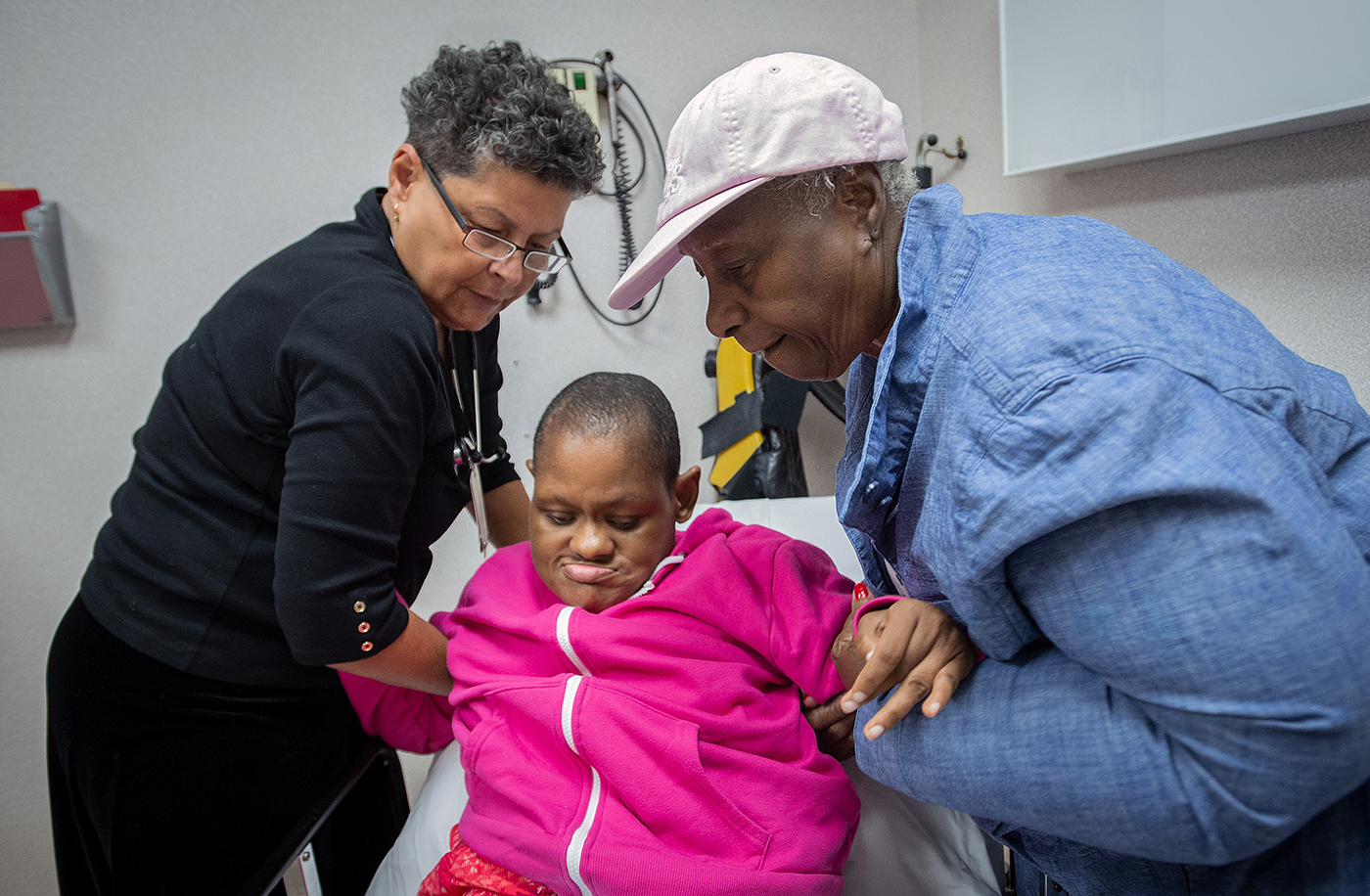 Tirado and Beauford move Benton to the exam table. 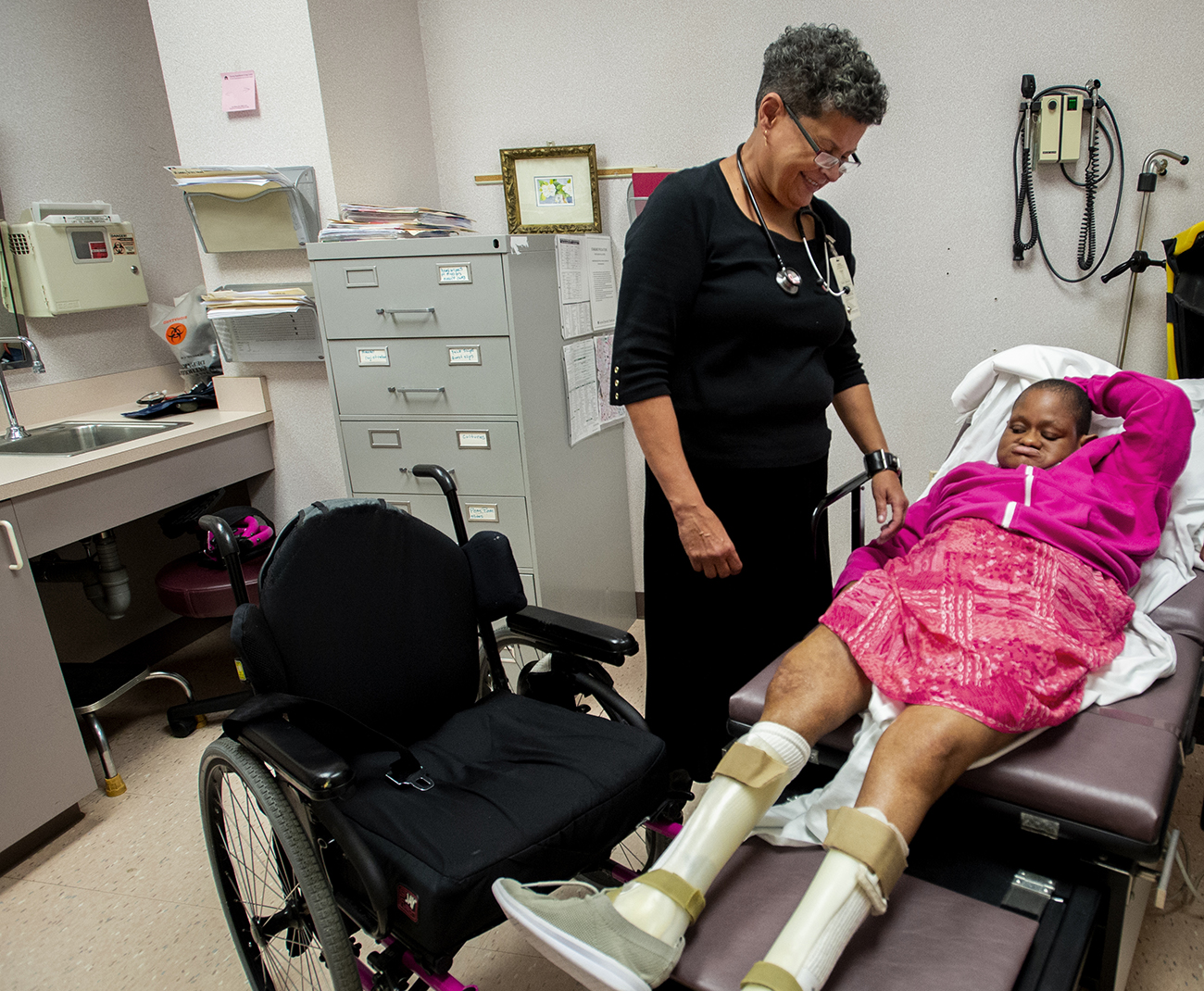 Tirado with Benton after her exam.

Tirado’s empathy, patience and sacrifice—she donates her paychecks back to the clinic—were recognized last summer, when she was awarded the Connecticut Hospital Association’s 2019 Healthcare Hero Award.

Supporters hope Tirado’s recognition will spur greater awareness of the need for access to quality gynecological care for women with disabilities. “I’m very much a believer that her story is going to cause other providers to think about their own practices,” said Dr. Stephen Holland, chief medical officer of Gaylord Specialty Healthcare.

Currently, Holland acknowledged, the broader healthcare system falls short in providing specialty care. “You see it in the ER all the time. That’s where these patients end up —not the best place to get specialty care,” Holland said. “Specialized care is a little different. I don’t think the access is there.”

Physicians’ lack of knowledge and training remain significant barriers to effectively caring for women with disabilities. In a recent study that surveyed 1,000 ob-gyns on awareness, attitudes and training around the care of women with disabilities, only 17.2% of respondents reported receiving any information or training on providing care to women with this population. Therefore, providers felt incompetent regarding this population for several reasons, including, but not limited to, a lack of understanding regarding how best to communicate effectively with patients, inadequate knowledge about specific disabilities, and uncertainty about patients’ decision-making capabilities. The study was published in the journal Health Equity.

Monika Mitra, who since the 1990s has been conducting research on sexual and reproductive health of women with disabilities, says that awareness has increased substantially over this period. “Disability research is more prevalent. There’s a lot more data, information, greater understanding, and better media coverage,” said Mitra, associate professor of disability policy and the director of the Lurie Institute for Disability Policy at Brandeis University. But that increased awareness doesn’t necessarily translate into access. “Even with all the data that’s out there, you’ll often find a complete lack of inclusion. I’m talking about creating a supportive, accessible environment, beyond ramps and grab bars.”

The barriers are physical and attitudinal. Most exam rooms, for instance, are not equipped with adaptive scales or exam tables. “Some of these women have never been weighed,” Mitra said. There are also less overt but equally challenging barriers, explained Mitra, like the widespread notion that women with disabilities should not and cannot be giving birth.

There are a few health organizations that do take proactive measures to provide accessible care to patients with disabilities—via equipment and other less tangible tools. Planned Parenthood is one such organization. Each of their 17 health centers throughout Connecticut have ADA-accessible examination tables. And, in conjunction with the state Department of Developmental Services, Planned Parenthood offers a program called Healthy Relationships: a multi-session, 18-hour program that teaches individuals to advocate for themselves.

Some families luck into identifying providers who care for their loved ones with disabilities.

Such was the case with Kathy Bobenski of Cromwell, whose 39-year-old daughter Carly has cerebral palsy and is quadriplegic. Bobenski found a gynecologist in Middletown for herself whom she trusted, and when she learned that the physician also treats a fair number of people with disabilities, she began taking her daughter there for routine checkups.

She considers herself fortunate. “If they’re not getting paid much, and it’s a difficult patient, who wants to deal with that?” Bobenski said, referring to physicians’ lower reimbursement rates from patients with disabilities enrolled in either Medicare or Medicaid. As for her own daughter, Bobenski said: “She’s good at seeing doctors. She’s not going to give them a hard time. And they’re not going to mind treating her.”