The state’s efforts to direct children in mental health crisis away from emergency rooms, to other services, have fallen short, with major hospitals reporting staggering increases in patient visits since 2013: Up 32 percent at Connecticut Children’s Medical Center, and 81 percent at Yale New Haven Hospital.

“I wish I could say we had made a lot of progress, but we haven’t,” said Dr. Steve Rogers, medical director of the emergency department’s (ED’s) behavioral health unit. “Unfortunately, I think it’s only going to keep trending this way.” 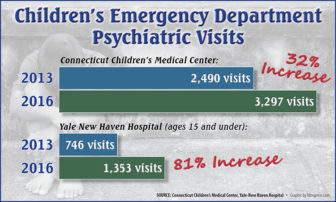 Similarly, Yale saw ED visits by children ages 15 and younger rise from fewer than 750 in 2013 to more than 1,350 in 2016 — and the numbers are running even higher this year, said Dr. Claudia Moreno, medical director for psychiatric emergencies in Yale’s children’s emergency department. At times, she said, all ED beds are full, and children wait on hallway gurneys.

“A lot of families are really struggling to find services in the community,” Moreno said. She said Yale now has to turn down referrals from other providers for the hospital’s 39 acute inpatient beds for children ages 17 and younger, just to accommodate its own emergency patients.

“I’m in the position of keeping our beds for kids who come to us suicidal, homicidal or not able to function,” she said.

Increasing numbers of children with psychiatric problems showing up at emergency rooms is not unique to Connecticut. A new report in Clinical Pediatrics, co-authored by Rogers, found that nationwide reductions in inpatient beds and in providers who treat mentally troubled children had contributed to a 40 percent increase in ED visits from 2009 to 2013.

But in Connecticut, in the wake of the December 2012 school shootings in Newtown, state officials had announced a package of initiatives in late 2014 to expand community care and reduce ED stays. That plan said the majority of those “stuck” in EDs – defined as medically cleared, but staying more than eight hours – were waiting for an inpatient bed. The initiatives were intended to “quickly increase capacity in the system” by adding crisis-stabilization beds, creating special Behavioral Health Assessment Centers (BHACs) as an alternative to EDs, and redirecting children with autism spectrum disorder to specialized services.

Some of those steps, such as creation of the BHAC, never materialized due to budget constraints. But Kristina Stevens, administrator for clinical and community consultation and support for the state Department of Children and Families (DCF), said the state has made progress on a number of initiatives intended to alleviate the ED bottleneck, including expanding the number of available short-term crisis beds from 14 to 80 last year; expanding the state’s Emergency Mobile Psychiatric Services (EMPS) program, which provides crisis-intervention to children referred by parents, schools or others; and working with schools and pediatricians to recognize, treat and refer children with mental health problems.

Hospital officials said they believe the ED backlog has been exacerbated by sharp reductions in congregate-care or residential treatment programs by DCF – a move that agency Commissioner Joette Katz has said is in line with national recommendations and trends. But critics say the state does not have a coordinated network of services in place yet to support that blanket policy shift. Also, in some cases when residential placements are found, DCF will not approve care, hospital officials said.

Stevens acknowledged that overhauling the mental health system from institutional to community-based care will take more time and resources. But she said that 79 cents of every dollar saved by closing congregate settings has been re-directed to community and family-based services. She said some of what’s needed is a “culture change” to educate schools, parents and other caregivers that there are alternatives to dialing “911” when a child is in crisis.

“Believe me, we don’t want to see kids sitting in EDs for hours,” she said.

At both CCMC and Yale New Haven, the EDs are holding areas where children are stabilized and assessed, but not treated. Most are assessed within five to six hours to decide whether they need inpatient care or can return home. Delays, including multiple-night stays, occur when there are no inpatient beds available.

At CCMC, more than 500 children spent more than 24 hours in the ED last year. At least one child stayed three weeks. Multiple-night stays, said Rogers, “are still common.” CCMC has no pediatric psychiatric beds, and so must refer children out to a six-bed unit at the Institute of Living – “usually full,” Rogers said — or scour the state for other beds. 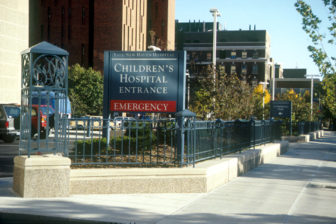 “Identifying inpatient beds is very challenging,” he said. “There are cases where we agree with the parent that your child needs help, but there are limited resources within the state — and we don’t want to keep them here. Being in the ED is not helpful. We have no windows. We have kids in the hallway. We are not a therapeutic environment.”

Saint Francis Hospital and Medical Center sees only a few children a week in mental health crisis in its own ED, but is fielding increasing numbers of requests from CCMC and other emergency departments for its 12 inpatient psychiatric beds for children ages five to 18, hospital officials said. At times, Saint Francis has expanded its capacity to 20 beds, but still, “for every bed we have, there are five referrals” turned down, said Robin Nichols, manager for crisis services in the Saint Francis ED.

At Yale, Moreno said, trained behavioral health social workers assess children and try to send them home or into one of Yale’s short-term beds “as soon as possible” – usually within the same day. But the beds are often full, and Moreno must move children out to accommodate others at risk. Often, children who are discharged return to the ED, she said.

“We see them coming back. Is it because we’re keeping them too short-term, or they’re not getting help at home – or both?” she said.

Moreno and Rogers said it’s difficult to refer children to community programs from the ED, although both hospitals try to ensure that there are supports in place when children go home. Rogers said CCMC is piloting its own care-coordination program for families “because community-based services are so hard to access.”

At Yale, Moreno and her staff try to connect families to outpatient or partial hospitalization services, but “it’s very cumbersome to get them referred” to community-based care, she said. One Yale in-home program affiliated with DCF, known as IICAPS (Intensive In-Home Child & Adolescent Psychiatric Services) has a more than four-week wait, she said.

Jeff Vanderploeg, vice president for mental health initiatives at the Child Health and Development Institute of Connecticut, said EDs are “not a good place for kids to be seeking mental health care,” and that more needs to be done to build an accessible network of services. 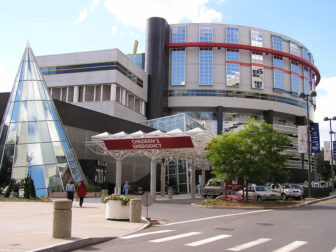 He said the Emergency Mobile Psychiatric Services program has seen significant growth – from 9,457 episodes of care in 2011, to 12,419 in 2016 – and is helping to divert cases from EDs. But on the other side, EDs are referring fewer children to the program than they did five years ago, raising questions about the “quality of the relationship” between some hospitals and EMPS providers, he said.

Some parents who have frequented EDs said that while the experience is distressing, they believe they have no other options.

Cheri Brown, a Kensington mother of three, said she made at least 20 trips to EDs around the state from 2007 to 2015. At smaller hospitals, her children– siblings adopted through DCF– were left on hallway gurneys for hours. She said CCMC and Saint Francis worked hard to move the children into inpatient care quickly.

“Basically, you’re on your own,” said Brown, who manages a construction company. “My kids had 12 different social workers in five years. It’s brutal. You have to learn the ropes yourself.”

Maureen O’Neill-Davis, a Torrington mother, said her daughter was taken to the ED four times in 2015 – from school and home. Twice, she went to Charlotte Hungerford Hospital, where she was kept 24-28 hours and discharged back home after no beds could be found, O’Neill-Davis said. The other two times, she went to CCMC’s ED, where she stayed two nights before a bed opened at the Institute of Living.

Hospital psychiatric clinicians point to a number of factors that are driving up ED visits, including increased vigilance by schools and parents about suicide, depression and aggressive behavior. They say the heavy reliance on EDs points to a lack of easily accessible community care options – while also signaling that opportunities to intervene early in children’s mental health, before the crisis stage, are being missed.

Adding to the ED crunch, they said, is a growing number of children with autism spectrum disorder (ASD), some who need specialized inpatient treatment that is in short supply in Connecticut.

“We don’t want to put a kid with ASD into a typical facility for adolescents with acute psychiatric problems,” Rogers said. “It’s not just that there’s a set amount of beds out there – a lot of patients are stuck (in the ED) because of poor matching between what’s available and what they need.”

Rogers suggested that the state should step up its oversight of psychiatric beds, so that EDs know what beds are available, and why some patients are rejected.

Right now, he said, “they make decisions to take this patient but not that patient, and there’s no accountability.”

To hear Lisa Chedekel’s interview about her story on Talk of Connecticut with Brad Davis and Dan Lovallo click here.

Lisa Chedekel’s story was featured on WNPR’s Where We Live with Lucy Nalpathanchil.  To listen to the conversation click here.