Michael Baudin of Manchester retired eight years ago after a career in auto repair, but now the 76-year-old is back working part time as a driver so he can afford prescription medications.

“Every year premiums go up and my co-pay is increasing,” he said. “I take medication for cholesterol, hypertension, heart, prostate and digestion. My wife quit her job due to health issues and her medication is expensive too.”

Baudin says his out-of-pocket cost for a 90-day supply of just one drug, Creon from AbbVie Inc., which he takes for digestion, is $100. The drug does not have a generic equivalent.

Nearly one-third of Americans have experienced a price hike in their medications in the past year, spending a total of $2 billion more, according to a June 21 survey by Consumer Reports.

As costs go up, insurers, pharmacies, doctors and legislators have responded with what they hope are strategies to reduce the burden on Connecticut residents. Still, for Baudin and many others in the state, price and out-of-pocket increases are a continuing worry.

The class of inflammatory medications, including drugs for rheumatoid arthritis, is among the costliest therapies with some of the steepest price increases. Data released by the Alliance of Community Health Plans show that the wholesale price for a 30-day supply of three popular rheumatoid arthritis drugs rose sharply between January 2013 and January 2016—Enbrel by 80.3 percent to over $4,000; Humira by 68.7 percent to over $3,500; and Xeljanz by 44.3 percent to more than $3,000. 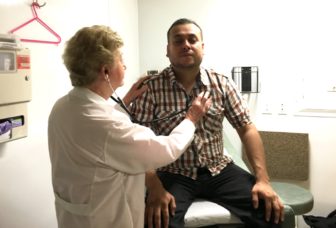 Pfizer Inc., whose Groton-based research facility spawned Xeljanz, increased U.S. prices by an average of 10.4 percent for more than 100 drugs at the start of the year, according to information services firm Wolters Kluwer. In June Morgan Stanley analyst David Risinger said in an investor note that Pfizer again raised prices by an average of 8.8 percent on some drugs.

Leerink Partners analyst Geoffrey Porges, also in an investor note in April, said Johnson & Johnson since 2015 had raised prices between 5 percent and 28 percent on more than a dozen drugs, including Simponi for rheumatoid arthritis, Imbruvica for leukemia and Xarelto, an anti-coagulant.

Among health insurers, Cigna Corp. and Aetna Inc. are exploring ways to help patients save money. Cigna wants to pay for good results, while Aetna has found that where medications are administered can have an effect on price.

Across Cigna health care businesses, approximately one dollar out of every five is attributed to spending on prescription drugs and biologics—drugs made from living organisms commonly used to treat cancer, diabetes and arthritis—according to Christopher Bradbury, senior vice president, integrated clinical and specialty drug solutions for Cigna Pharmacy Management.

Cigna is intensifying its focus on value-based contracts in which insurers and manufacturers agree that payment for a particular drug would be based on patient health outcomes. In addition to the original discount obtained by an insurer, the manufacturer would provide a further discount if the drug does not perform as expected. Cigna has signed new value-based contracts with Amgen and Sanofi/Regeneron for the cholesterol lowering drugs Praluent and Repatha and has similar contracts in place for medications for heart failure, diabetes, multiple sclerosis and hepatitis C. Earlier this year Cigna and Aetna signed similar agreements with Novartis for the cardiac medication Entresto.

Citing the information as proprietary, Cigna declined to quantify the discounts obtained and the savings accrued to customers. “To date, real-world performance has met our expectations,” spokeswoman Amy Szable said.

Meanwhile, Aetna is looking at where drugs are given. Aetna data show that costs are twice as high, on average, for the same specialty drug when injected or provided intravenously, such as chemotherapy in a hospital outpatient setting rather than at a doctor’s office or at home. This results in higher co-payments, higher costs for the patient’s employer, and eventually, higher premiums. When asked to approve coverage for a specialty drug at a high-cost location, Aetna staff is directing doctors to a less expensive location.

As for pharmacies, CVS Health, with 174 outlets statewide, is offering a new specialty prescription service that provides patients with guidance on insurance and co-pays. Additionally, CVS is nudging patients toward cheaper generic alternatives.

Between 2014 and 2015, the price of generics steadily declined, dropping 19.9 percent on average, according to Express Scripts. Currently, 85 percent of the drugs dispensed by CVS are generics.

Some physicians around the state, including those at free health clinics run by Stamford-based AmeriCares, are also increasingly prescribing generics. Others are helping patients to find financial assistance to ensure that no one forgoes treatment due to the cost of a drug.

Dr. Madhavi Gorusu, a hematologist oncologist at Starling Physicians Group in Wethersfield, said the co-pay could be formidable for a single chemotherapy infusion, which can run into thousands of dollars. “But with the help of foundations and pharmaceutical industry grants, we come up with a plan for patients to be treated,” she said.

State legislators also have stepped in. Earlier this year, the General Assembly approved a bill creating a task force to study value-based pricing of prescription drugs. The bill, which the governor signed into law in June, requires that the task force submit a report to the legislature by Jan. 1, 2017.

U.S. Sen. Richard Blumenthal is helping to lead a proposal called the Creating and Restoring Equal Access to Equivalent Samples Act that seeks to address the delays in the manufacturing of generic drugs by making available the products companies need.

But affordable solutions can’t come quick enough for patients who currently need expensive prescription drugs to stay alive. By the time 37-year-old Nestor Garcia was diagnosed with Type 1 diabetes at a Malta House free clinic in Hartford, his blood sugar was more than twice the normal range. His physician immediately started him on injectable doses of Lantus, priced at $310, and Humalog, priced at $284 per single vial in the retail market.

With no health insurance and a family to support on a weekly paycheck, Garcia says he could never afford his medication but for help from donors. “Without Malta House, I probably wouldn’t be here today,” he said.