In 2018, Dean and Paula Palozej found their son, Spencer, on the floor of his home in Manchester.  Spencer was one day shy of his 30th birthday and he was found dead of a fentanyl overdose.

Spencer, who worked as a landscaper, started taking oxycodone for pain after two surgeries in his early 20s. A friend told his father that he took a fentanyl pill thinking it was oxycodone.

Palozej unloaded on the pharmaceutical industry, which is blamed by many for the explosion in prescription opioid use and abuse nationwide over the past two decades. “I’m disgusted with what they did—the greed they had,” he said. “They abused their power and persuasiveness to get many Americans hooked on the pills.”

He was reacting to the release of a database prepared by the Washington Post from data gathered by the U.S. Drug Enforcement Agency. The Post analyzed nearly 380 million transactions tracking the distribution of prescription opioids through individual pharmacies from 2006 to 2012.

The Post’s investigation showed that the drug industry reaped tremendous profits by flooding some of the most vulnerable communities in the country with billions of painkillers. As a consequence, more than 200,000 people have died from prescription drug overdoses since 1999, according to the Centers for Disease Control and Prevention (CDC). 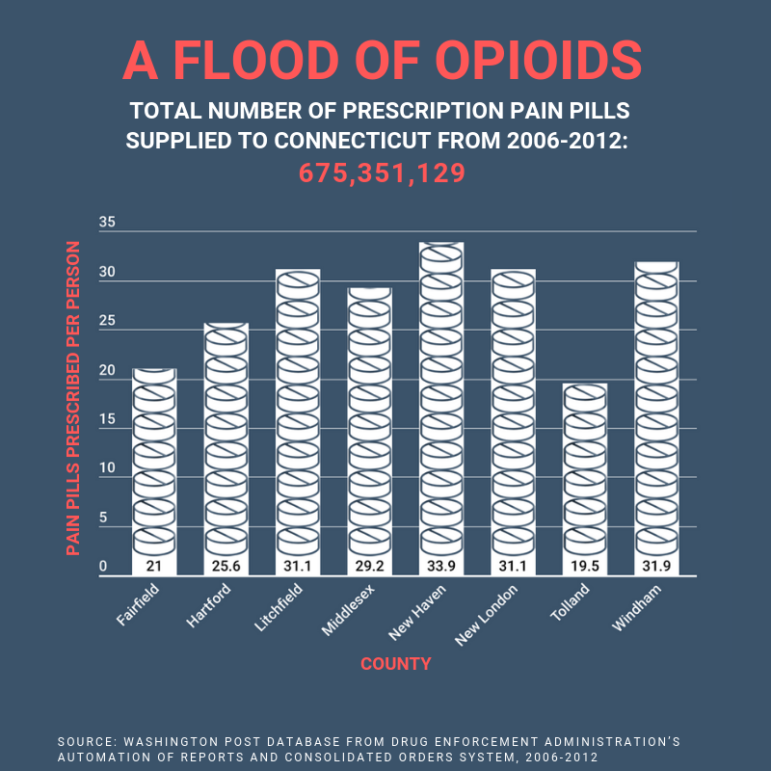 The flood of prescription opioids led to a dramatic increase in opioid addiction, from prescription pills to heroin and fentanyl—a synthetic opioid that’s 50 to 100 times more powerful than heroin.

The prescription opioid tsunami struck hardest in working-class communities in the Appalachian Mountains regions of West Virginia and Kentucky. But it also has taken a toll in Connecticut. Between 2012 and 2018, 5,175 people died of accidental drug overdoses here.

The Post’s database shows that there were more than 675 million prescription pain pills distributed in the state between 2006-2012. The top per capita county was New Haven, with 33.9 pills per person per year. Windham had 31.9; Hartford, 25.6; and Fairfield, 21.

The database shows that the phenomenon was felt intensely in communities along the Naugatuck River Valley, once a manufacturing powerhouse. Today many of the old factories are shuttered and the local economies are reeling.

“Just like Appalachia, the Naugatuck River Valley has been financially strip-mined—and now this. It’s outrageous,” says Steve Schrag, a health and safety officer with the Service Employees International Union who lives in Waterbury. He points out that the drug companies marketed opioids aggressively in parts of the country where there’s a lot of factory work and mining. “A lot of people get hurt. They get painkillers to deal with injuries, and then they get hooked.” 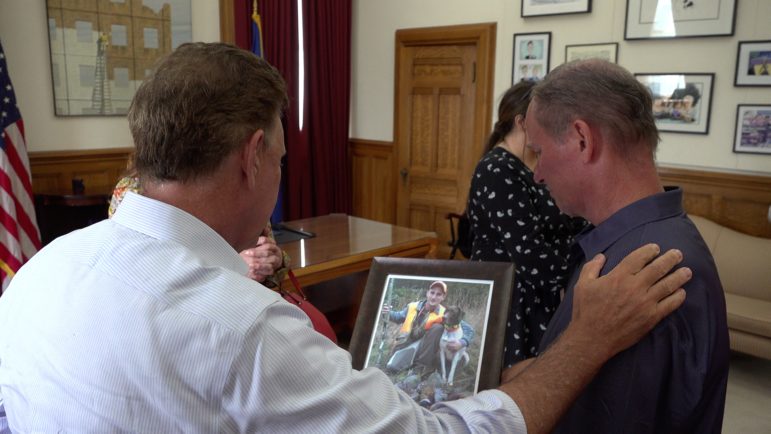 Dean Palozej of Stafford shows Gov. Ned Lamont a photo of his son who died of a fentanyl overdose. Palozej attended a ceremonial signing of new law that raised the penalty for selling illicit fentanyl.

Some of the top-volume retailers of prescription opioids, including oxycodone and hydrocodone, were in the Valley towns of Ansonia, Torrington and Waterbury. For instance, a CVS Pharmacy in Ansonia sold 5.4 million pills from 2006 to 2012. That’s 272 pills for every woman, man and child in Ansonia. While opioids cast a pall over Ansonia today, the city seems to be haunted by its industrial past as well. Its riverside is dominated by a sprawling derelict factory once operated by the Farrel Corp.

The top-volume retailer in Connecticut was Value Health Care Services, which is located in an industrial park in Cheshire. It sold 14.7 million pills during the period. The company is part of OmniCare of Connecticut (a subsidiary of CVS Health), which manages medication programs for assisted-living facilities around the state.

In response to questions about six CVS pharmacies in the Naugatuck River Valley that were high-volume sellers of opioids, CVS Health said they all serve highly populated communities and are near hospitals. The company said an Omnicare pharmacy typically has a larger scale of business than regular retail pharmacies. Further, CVS Health said, its distribution centers have a monitoring system for suspicious orders, and, in retail pharmacies, pharmacists are provided with tools to help them evaluate controlled substance prescriptions before filling them.

The evidence is strong that the spread of these pills and opioid addiction has devastated communities in the Naugatuck River Valley. Last year alone, there were 80 deaths from drug overdose in Waterbury and another 24 in Torrington, according to records of the Connecticut State Medical Examiner. 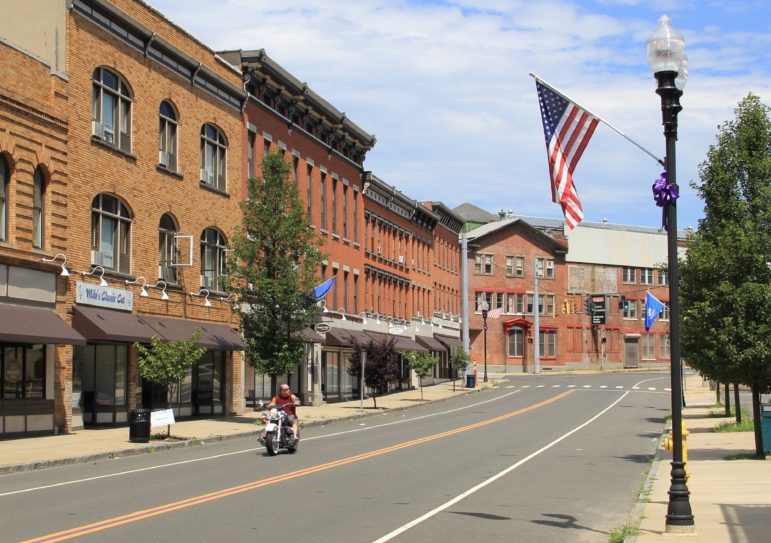 Downtown Ansonia, East Main Street, with the derelict Farrel Co. factory at the end of the block.

In 2015, the Conn. Health I-Team was the first to report that a nurse practitioner at a Derby pain clinic was among the 10 top prescribers of oxycontin in the country. The state barred practitioners at the clinic from participating in the Medicaid program because of improprieties in treatment and oversight. One of them, Heather Alfonso, pleaded guilty to federal charges that she took kickbacks from a drug company in exchange for prescribing cancer pain medications.

In the 2018 DataHaven Community Wellbeing Survey, 33 percent of Valley respondents said they knew someone who has struggled with opiate misuse, compared to about 31 percent statewide.

“This may seem like a little bucolic, protected corner of the world, but it’s not so. We have the same issues as everybody else,” says Maria Coutant-Skinner, executive director of the McCall Center for Behavioral Health, a substance abuse treatment organization in Torrington.

She cited the low-income neighborhoods in Torrington, where, because of the high rates of addiction, operators have established dozens of so-called “sober houses,” where people who are attempting to recover from addiction to opioids live together. Typically, the residents have little or no supervision, and no onsite medical care.

This paucity of oversight can have tragic consequences. Hamden resident Tracey Gagnon’s son Teddy died of an overdose in 2017 in a sober house in New Haven, where he was trying to recover from opioid abuse disorder. “I thought the place would be good for him, but there was no supervision. I was completely wrong,” she says.

These sober houses are an essential element of the most popular approach to treating people who suffer from opioid abuse disorder. These abstinence-based programs, which include detoxification and residential treatment facilities, are based on the belief that abstinence is the best approach to dealing with opioid addiction, like it is with alcohol.

Yet addiction medicine experts say that abstinence-based programs are successful only for a tiny minority of people who suffer from opioid use disorder—perhaps 10 percent. The most successful approaches are long term and involve providing medications, including methadone and buprenorphine, that satisfy cravings for opioids without making people high. A study conducted by Yale School of Medicine faculty members showed that 38% of opiate-dependent patients remained in treatment with buprenorphine at five years.

Coutant-Skinner of the McCall Center in Torrington says: “We’re evolving our thinking fast. We need medicine-assisted treatments above all else.”

Unless that approach takes hold statewide, it seems likely that the opioid epidemic that killed more than 1,000 people in Connecticut last year will retain its death grip on the state. “We need to take that death rate number to zero as quickly as possible,” says Dr. David Fiellin, director of the Yale Program in Addiction Medicine. 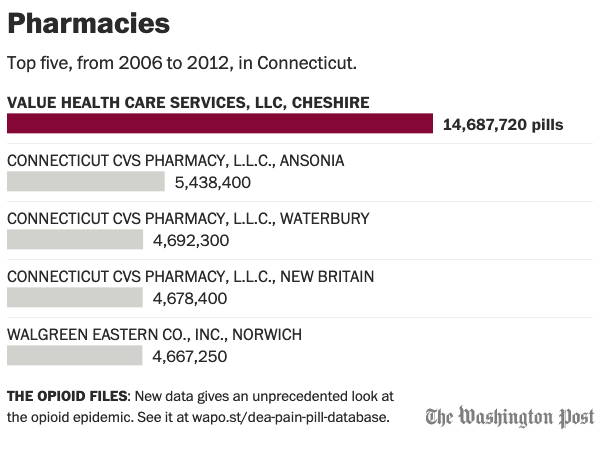 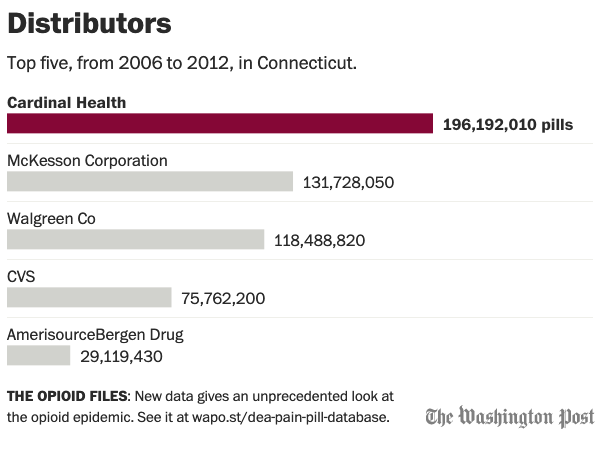 Data and information for this story was obtained from the Washington Post. Follow the Post’s coverage at Washpost.com.