Taking certain prescription painkillers or anxiety medications for long periods of time may increase patients’ risk of death, according to a recent Yale School of Medicine study of veterans.

Researchers who examined the medical records of about 64,000 veterans found that patients who took opioids or benzodiazepines long-term, for 90 days or more, had a higher risk of death – from any cause – than those who did not.

The risk of death was even greater for patients who took both types of medication at the same time. More than a quarter of the veterans studied were HIV-positive, and they had a higher risk of death than those without the virus.

Opioids are painkillers that include Vicodin and Oxycontin while benzodiazepines, such as Valium, typically are prescribed to treat anxiety and insomnia.

The findings could have a meaningful impact at a time when prescriptions for both types of medications are on the rise, said Dr. Daniel Weisberg, who led the study. He was a Yale researcher at the time of the study but is now an internal medicine resident at Brigham and Women’s Hospital in Boston and a clinical fellow in medicine at Harvard Medical School.

“Opioid prescriptions over the last 20 years have been skyrocketing,” he said, and benzodiazepine prescriptions are on the rise as well. 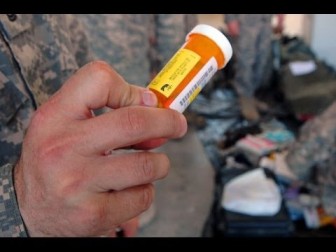 In addition to the well-documented risks of addiction and overdoses, both types of drugs have sedating effects that can pose additional dangers to patients, he said. Those taking the medications could be at greater risk for falls or motor vehicle accidents, for instance, he said.

“We don’t really have good evidence that long-term use is effective,” Weisberg said. “We wanted to see what risks were involved so clinicians could make better choices when prescribing these medications.”

The study also, for the first time, identified a risk of benzodiazepines “which really hasn’t been studied before,” he said.

“Now we have convincing evidence that physicians should think twice before prescribing both of these medications at the same time,” he said. “We really have to be cautious about the number of prescribed meds that patients are on.”

For the study, researchers examined the veterans’ medical records in a VA Health Care System database. Any veteran in that database who was prescribed opioids or benzodiazepines for 90 days or longer in 2009 was included. Researchers then followed up to see how many of those patients had died over the next five years, through 2014.

The database is housed in the VA’s West Haven site but included data on veterans nationwide, Weisberg said.

Members of the armed forces are more likely than their civilian counterparts to abuse prescription drugs, and the most commonly misused medications by service members are opioid pain relievers, according to the National Institute on Drug Abuse.

Service members who have been deployed or witnessed combat multiple times are at the greatest risk of developing substance abuse problems, according to the Institute, which is a government agency.

It has become such a problem, according to the group, that military branches have taken steps to curb the use of prescription drugs. The U.S. Army, for instance, now limits prescriptions for opioid pain relievers to six months and requires that a pharmacist monitor soldiers’ medications when multiple prescriptions are used.

The VA database used for the Yale study is a rich resource, he said, because it includes comprehensive records on veterans.

Among other things, the data showed that patients taking higher doses of opioids had a higher risk of death than those prescribed lower doses, and those who took benzodiazepines had a lower tolerance threshold for opioids, he said.

Among the veterans in the study group, those on the medications who had HIV had a higher risk of death than those who did not have the infection.

Statistically, they have a higher rate of drug use and are more likely to take other medications that could react with opioids and benzodiazepines, which is why they were specifically examined as party of the study, he said.

In a previous study, the same team of researchers found a link between multiple prescriptions and mortality for patients with or without HIV. The potential harm of taking medications long-term, however, had not been assessed before the latest study.

The team is examining how patients who receive opioids are monitored and wants to increase training for prescribers, Weisberg said.