When Ashley Yalof finishes a run, either on a treadmill or outdoors, she gets much more than merely a feeling of accomplishment: she knows her average pace, can compare her performance to previous runs and even gets congratulated by a famous athlete.

Yalof, 27, is one of a growing number of millennials using health-related mobile apps. While smartphone app use has risen in general, the use of health-related apps is particularly prominent among millennials, or those born between 1980 and the early 2000s, research shows.

Among smartphone users of all ages, 19 percent have apps on their phone to track or manage some aspect of their health, according to Pew Research Center’s report “Mobile Health 2012,” the most recent comprehensive report on the topic.   In June, Flurry mobile analytics reported that health and fitness apps grew 62 percent in usage from December 2013 to June 2014. The overall growth of app usage was 33 percent.

C25K is an app for runners.

Yalof, who lives in Stamford, has been using the Nike+ app for roughly three years and says it has become a favorite. She uses it to track her running mileage both indoors and outdoors, when the app maps her runs using GPS.

Each run ends with a congratulatory message from a famous athlete, she said. A recent run, for instance, concluded with a message from Sanya Richards Ross, who won the gold medal for the 4×400 relay in the 2012 Olympics.

“It’s now earned its spot on my homepage for apps for my iPhone,” Yalof said of the app. “I use it about twice a week.”

The most commonly downloaded health apps, according to the Pew study, are those pertaining to exercise, fitness, pedometers or heart rate monitoring. Among all age groups, 38 percent of health app users download apps for those uses.

The second most popular types of health apps are those focusing on diet, food or counting calories. Thirty-one percent of all health-app users download apps for those purposes.

Apps are beneficial because they give users accountability, provide clinicians with useful information that can inform patient care, and in many cases make users more aware of what they are eating throughout the day, said Dr. Ania Jastreboff, an assistant professor at Yale School of Medicine specializing in endocrinology, metabolism and weight management.

As an endocrinologist who works with adult patients struggling with obesity, she encourages all of her patients to track their food intake.

“It helps them identify what food they are consuming and their eating habits,” she said. “[Apps] allow people to be more mindful about what they are eating throughout the day.”

Another major draw of health apps, particularly for millennials, is the social support aspect, Jastreboff said. Many users appreciate that some apps encourage healthy competition and track their progress with friends or other app users, or post accomplishments on social media, she said.

“It gives you this positive peer pressure and accountability,” she said, adding millennials are especially drawn to this feature because social networking is often is a significant part of their lives. 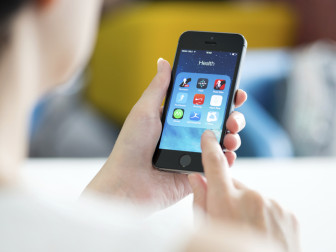 Christa Tubach, 25, of West Hartford, uses four apps to keep track of her health and fitness goals. After playing sports throughout her childhood and high school, she began going to a gym in college and finds the apps have helped her stay on track.

“These apps help me keep track of my workout life and try to continue making them a priority,” Tubach said. She uses Map My Run, the weight-training app StrongLifts, C25K (which stands for Couch to 5K) and Lose It! and said the nutrition app Lose It! is her favorite.

“It’s so easy to lose track of what you’re eating during the day, and although you might think something sounds healthy, once you put it into the app, you could find out otherwise,” she said of Lose It!, which gives users foods’ nutritional values.

“I love being able to directly scan a food item, being able to set up weight goals, and having all of this information all in one place, so I can look back at good or bad meals,” she said.

Santo Galatioto, 33, of Orange, also likes using an app to keep track of what he eats. His favorite is My Fitness Pal, which he has been using for the past year.

“I like that I can track my calories and what I eat through the day,” he said.

Women, individuals under age 50, those who are better educated, and those with an average household income of at least $75,000 are more likely than others to have downloaded at least one health app, according to the Pew study.

One thought on “Millennials Embrace Mobile Health And Fitness Apps”