The number of students suspended or expelled from schools has declined, as have in-school arrests, but minority students face disciplinary action more often than their white peers, according to a report released today by Connecticut Voices for Children.

While the drop in disciplinary actions is encouraging, Connecticut schools still have work to do, according to the advocacy group.

“Extensive research shows that excluding children from school for disciplinary problems is often ineffective and even counterproductive. Children learn best when they are in school,” the report says. The rate of arrests, suspensions and expulsions in Connecticut schools, while dropping, “remains alarmingly high” and inconsistent.

• Special education students were disciplined more frequently than their mainstream counterparts. They were arrested three times more often, expelled about twice as often and suspended out of school nearly three times as often, the report found.

“This report tells us that many schools in Connecticut have reformed their disciplinary practices and reduced student arrests, expulsions and out-of-school suspensions,” Ellen Shemitz, executive director of Connecticut Voices for Children, said in a statement. “Yet these reforms have not benefitted all children equally. How can we hope to reduce the yawning achievement gap when school disciplinary practices push minority children out of school at disproportionate rates?” 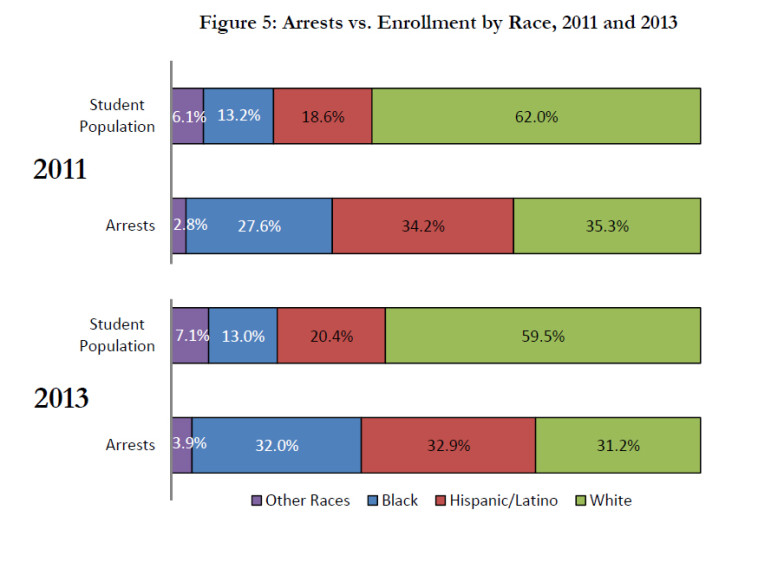 Arrests vs. enrollment by race.

Bridgeport school officials are encouraged by an overall drop in disciplinary actions in the district but are committed to further reductions, said Michael Mulford, Bridgeport Public School’s assistant superintendent of student support services and operations.

The schools have created a memorandum of agreement with local police to create a “more consistent response to school incidents” and reduced the number of referrals of students to court, he said.

“We also have increased the number of school referrals to the Juvenile Review Board as a diversionary tactic and have continued an active relationship with the Regional Youth Adult Social Action Partnership,” he said. “We also participate in the work of the Disproportionate Minority Contact Committee to reduce contact with students of color, and the Juvenile Justice Task Force to reduce truancy and school suspension rates.”

Statewide, the most common reasons for both in-school and out-of-school suspensions in 2013 were school policy violations, fighting/battery and physical or verbal confrontations.

In 2013, Hartford schools had the most expulsions with 97. The Connecticut Technical High School System and New Haven schools each had 80. The most common reasons students were expelled in Connecticut were drugs, alcohol and tobacco; weapons and fighting/battery.

The greatest number of arrests during the 2013 school year were in Waterbury schools, which had 308, followed by the Connecticut Technical High School System with 136 and New Britain with 128. The most common causes for student arrests in 2013, as in 2011, were fighting/battery; drugs, alcohol and tobacco; and physical or verbal confrontations.

The report makes the argument that disciplinary actions could be reduced further in Connecticut schools, since many of the things for which students were expelled or suspended could have been handled within the school. “School policy violations,” for instance, include things like skipping class and using profanity, according the report. 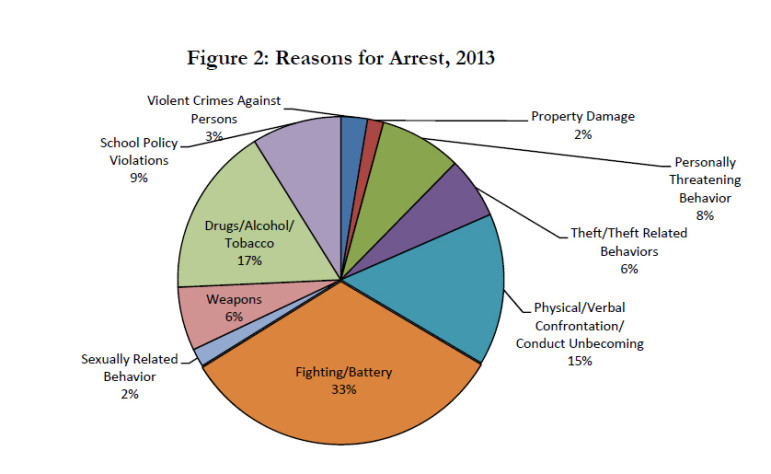 To further cut down on arrests, expulsions and suspensions, Connecticut Voices for Children recommends that policymakers and state education officials: improve data collection by clearly defining “student arrests,” which is not defined by the state, and publishing arrest data; require districts with in-school police to create memoranda of agreement between schools and police to set ground rules regarding arrests; and implement preventative strategies and other measures to reduce racial and other disparities.

“Children need a respectful learning environment, but excluding children from school for disciplinary reasons is not effective and may widen our educational achievement gaps,” Sarah Iverson, co-author of the report and policy fellow at Connecticut Voices for Children, said in a statement. “Many schools are effective at managing problem student behaviors while keeping children in the classroom, and we should share lessons about what works.”

The Child Health Development Institute has a program aimed at diverting youth from the school-to-prison pipeline. For information click here.