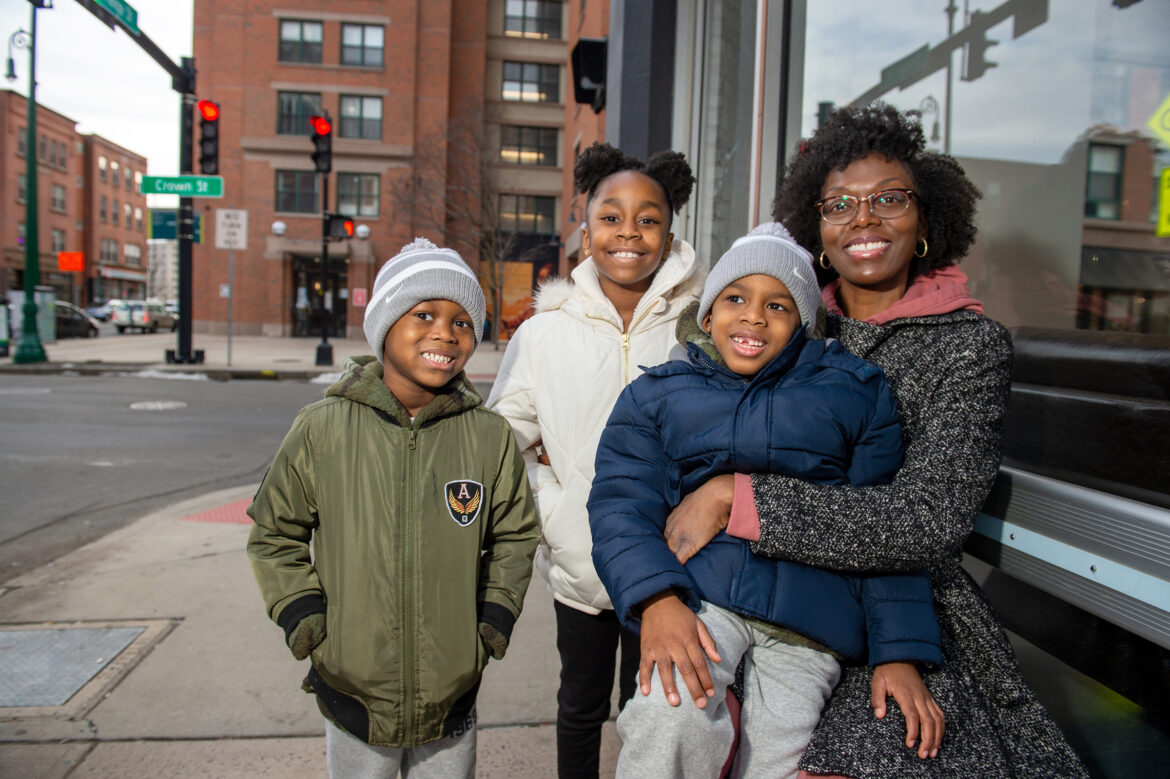 Chinara Johnson with her children, Zavad Morton, 5, Azania Johnson, 8 and Zakai Morton, 5, near her apartment building in downtown New Haven. She would benefit from the expanded Child Tax Credit program.

When her car started making a noise more than a year ago, Chinara Johnson parked the vehicle and hasn’t used it since.

As a New Haven mother of 5-year-old twin boys, one of whom is on the autism spectrum, and an 8-year-old daughter, Johnson doesn’t have the money to get the car running properly again.

She also didn’t have money for childcare as she underwent breast cancer treatments, including surgery and chemotherapy, and is now struggling with increased utility and food bills since the kids are home during the pandemic.

Over the past few years, Johnson has not been eligible for federal child tax credits because she doesn’t make enough money.

But under the American Family Act—sponsored by U.S. Rep. Rosa DeLauro, D-3rd District, and others—Johnson would qualify to receive direct payments of $3,600 each for the boys and $3,000 for her daughter in federal child tax credits.

For now the child tax credit expansion would be available only in the 2021 tax year as part of the pandemic relief bill approved by the U.S. House of Representatives on Saturday. Under the bill, the IRS would have until July to begin to process direct payments. Nearly 11 million (one in seven) children in the United States live in poverty, according to the Center for American Progress. The proposal would lift nearly 5 million children out of poverty, the Columbia University Center on Poverty and Social Policy reports. That would cut the childhood poverty rate by 52% for Black children, 45% for Hispanic children, 61.5% for Native American children and 38.6% for white children.

The one-time expanded child tax credit would benefit 132,000 Connecticut children whose families make less than $23,000 a year, according to the Institute on Taxation and Economic Policy (ITEP). Overall, 721,300 Connecticut children in income brackets from the lowest to the highest would benefit, ITEP says. Nationally, families who make less than $21,300 a year would see a 37.4% boost in income due to the expanded child tax credit, the organization says.

The one-year version of the American Family Act is part of the $1.9 trillion American Rescue Plan before the U.S. Senate. The larger bill funds a wide range of programs to combat the COVID-19 pandemic and keep families and businesses afloat until the health crisis is under control.

For Johnson, expanding the child tax credit is a no-brainer. “I know there are other parents who are going through a hard time,” she said. “Grocery bills have increased because the kids are home. There’s charging the kids’ remote devices. What about cleaning supplies? Where is all this extra money coming from?”

The payments would be a game-changer for the 38-year-old mother who must find creative ways to purchase educational materials for her son since he hasn’t been in a classroom in a year.

“He had trouble writing, so they said it would benefit him if he had an easel,” Johnson said. “He gets services at school, but all that came to a halt when schools closed. I had to purchase the easel. I’m on a fixed income, but he needs soothing toys and other things that help him learn. I usually go without to make sure the kids have what they need.”

Johnson is hardly alone. According to a January Census Pulse Survey, about 874,000 Connecticut residents reported having difficulty covering household expenses, and 174,000 parents and guardians said their children aren’t eating enough because they can’t afford food. Chinara Johnson with her children in New Haven.

For 18 years, DeLauro has championed the idea of expanding the child tax credits to include low-income families as part of her “desire to harness the power of the federal government to provide for the least among us,” she said in an email.

But the plan didn’t gain traction until this year when several factors suddenly changed the political landscape, DeLauro said. “I think part of the reason this is moving now is because there is data to back up the sweeping impact this policy would have on families across the country,” she said. “Additionally, the coronavirus pandemic did not just shine a light on child poverty, it exacerbated it, and amplified the need – and the urgency – for expanding and improving the Child Tax Credit.”

The proposal helps families by removing the income threshold required to benefit from the child tax credits, increasing the amount of the credits to $3,600 for children under age 6 and $3,000 for children 6 to 17, and putting the money in the hands of families through direct payments rather than a reduction of their tax bill.

Under the current child tax credit, families must meet an income threshold to receive the full benefit, and only $1,400 of the $2,000 credit can be returned as a tax refund. DeLauro’s bill would provide a tax credit for individuals with children making up to $150,000 a year and all married couples who earn less than $200,000 a year. “We are at a moment where passage is possible,” DeLauro said. “We have presidential leadership, strength in Congress, and the urgency of the pandemic demanding action. We can make permanent changes that would lift children out of poverty – this generation and those that follow.”

The direct payments would help people like Juana Islas, who, along with her husband, works one full-time job and one part-time to support their three children, ages 14, 11 and 9. Although she is an undocumented immigrant, Islas pays state and federal taxes but gets little in return, she says.

Her family does qualify for child tax credits because the children were born in New Haven, where they live. But she cried as she explained her living situation. “I have to work two jobs because I have three kids to support and no government assistance available to me because I am undocumented,” she said.

The entire family came down with COVID-19 because she and her husband had no choice but to go to work throughout the pandemic. “We didn’t have the option of staying home,” Islas said.

The family wasn’t eligible for stimulus checks or unemployment because of the couple’s immigration status. “Taxes are deducted from our paycheck, but the money isn’t returned to us for the safety net,” she said.

Islas hopes the child tax credits will be expanded so that she and her husband can work less. “With the situation we’re in, we are abandoning our children because we are working day and night,” she said. “We can’t help our kids with their homework or their online classes. We wouldn’t stop working if we had government support because we are hardworking people, but we would spend more time with our children.”