Conley Monk, a Vietnam War veteran who has been fighting for decades to have his military discharge status upgraded, expressed hope Friday that new Pentagon guidelines will help him and other Vietnam Veterans with Post Traumatic Stress Disorder finally get federal benefits.

PTSD was not designated as a medical condition until 1980. Some 70,000 Vietnam veterans who suffered from undiagnosed PTSD were given less-than-honorable discharges for their behaviors and many were denied medical, educational and other federal benefits and had trouble securing employment. 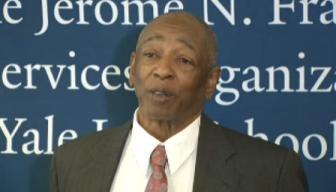 “I’m a fighter. I won’t quit,” said Monk, who left the military in 1971. “I pray that this makes a difference. I’ve been waiting for 43 years for my discharge to be changed,” he said.

After lobbying by U. S. Sen. Richard Blumenthal, D-Conn., and others, Defense Secretary Chuck Hagel this week issued guidelines which Hagel said would ease the process for Vietnam veterans who apply to upgrade their discharges and “ensure fair and consistent results across the military services.”

Tens of thousands of Vietnam veterans could be affected by the new guidelines that take effect in late October.

Blumenthal said at a news conference that 860,000 Vietnam veterans suffered from undiagnosed PTSD and more than 70,000 of those received a discharge status called “other than honorable.” The war ended five years before PTSD received medical recognition.

Monk, now a West Haven resident and Marine Corps veteran, said he applied for upgrade status 40 years ago and then again a month ago. He was rejected both times. He said he would reapply when the new procedures are implemented.

Monk said as a result of his other than honorable discharge he couldn’t get VA medical benefits or GI education or housing loans.

Blumenthal said that the National Defense Authorization Act of 2015, which is still on the floor of the Senate, includes specific actions for the military to take when considering these cases, including informing veterans of the new guidelines and seeking advice from mental health professionals.

Blumenthal said if the new process works, it would erase “an undeserved stigma” which has resulted in such consequences as joblessness and homelessness.

He said he would monitor the appeal program to insure there is sufficient advice and outreach to veterans so they know about the procedural changes, and there is participation by clinical psychologists and psychiatrists.

Earlier this year, the Yale Law School Veterans Legal Clinic filed a federal lawsuit suing the Armed Forces on behalf of Vietnam veterans with PTSD to help them gain their benefits.

The Yale clinic is not withdrawing the suit in the wake of the new procedures, instead waiting “to make sure this translates into real concrete action for veterans,’’ said Thomas Brown, a law student working on the case.

Brown said the language in Hager’s guidelines “isn’t sufficiently clear to determine if they will result in significant changes for Vietnam veterans with PTSD.”

“We hope this will be the foundation for real reform. That remains to be seen,” he said. Brown said there aren’t specific details of how the policy will be implemented.

In its suit, the Yale clinic is representing five Vietnam War veterans, including Monk, as well as Vietnam Veterans of America and its Connecticut State Council, and the New Haven-based National Veterans Council for Legal Redress.

The clinic has asked the U.S. District Court to designate the suit as a class action on behalf of tens of thousands of Vietnam veterans and is awaiting a decision.

Brown said if the new process results in “real reform,” then the clinic would consider dropping the case. “We’re not at that point right now,” he said.