It has taken more than 40 years, but Connecticut veteran Conley Monk has won his battle to have his military discharge status upgraded and can now receive federal benefits.

Monk, 66, and four other Vietnam War veterans with Post Traumatic Stress Disorder (PTSD) were granted upgrades by the Pentagon after filing a federal lawsuit in March 2014 against the Armed Forces. The veterans had received Other Than Honorable (OTH) discharges, which they contend were based on behaviors later attributed to PTSD.

PTSD was not designated as a medical condition until 1980. The five veterans were given General Under Honorable Conditions discharges.

“I didn’t think this day would come,” Monk said Monday at a news conference. A Marine Corps veteran, he received a high proficiency rating in 1969 for his conduct and performance in the Marines. 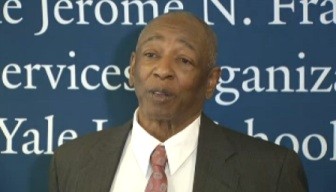 Monk said because of his discharge status, he was unable to get benefits from the U.S. Department of Veterans Affairs for his medical care, education, and to buy a house. A West Haven resident, he said he worked two jobs to pay for college and still hopes to get help through the GI bill to buy a house. He had a stroke 10 years ago and has diabetes, which, he said, has been attributed to Agent Orange exposure.

The clinic estimates that at least 80,000 Vietnam veterans with OTH discharges have received military-connected PTSD diagnoses. The upgrades were granted to the five veterans after a Pentagon guideline was issued last fall calling for “liberal consideration” for Vietnam War veterans with PTSD. The upgrades are determined by boards, representing the service branches.

Michael Wishnie, a Yale Law professor who supervises the clinic, said VA officials have written confirming that the veterans are now eligible for medical and disability benefits.

But Wishnie noted some veterans have been denied upgrades “even under the new policy.”

U.S. Sen. Richard Blumenthal, D-Conn., expressed concern that veterans may not know about the guideline, which took effect last October. A member of the Senate Armed Services Committee, he has asked the Pentagon to report by the end of August about its method and progress in informing veterans.

“We have yet to see” an effective outreach program about the guideline, Blumenthal said.

He said that the lack of a PTSD diagnosis before 1980 is “no excuse to fail to upgrade status in the decades that followed.”

He called the issue “a matter of simple justice.” The United States has “failed to recognize post traumatic stress and give these men and women the justice they deserve, not to mention the medical treatment they need,” he said.

The five successful veterans were plaintiffs in a federal lawsuit against the Armed Forces brought by the Yale clinic. Federal Senior Judge Warren W. Eginton dismissed the suit without prejudice in November, meaning it can be filed again. The judge wanted to see if the new guideline would be effective, said Wishnie, the law professor. He said the clinic hasn’t decided whether it will go back to court.

McCalmont said the clinic has received “hundreds and hundreds” of calls from veterans around the country about the issue. Prior to the new guidelines, five percent of requested upgrades were granted, she said.