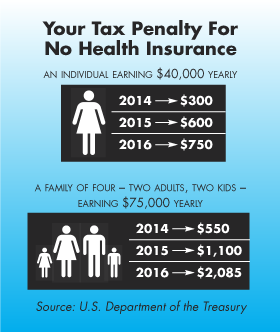 Time is running out for thousands of uninsured Connecticut residents who must decide whether to comply with a federal mandate to buy health insurance starting Jan. 1, 2014 or pay a penalty instead.

“We are undertaking a paradigm shift in how we think about health insurance,” said Dan M. Smolnik, a tax attorney from Brookfield. “We don’t know for sure how people in Connecticut will respond. But I think the majority will weigh the risks of not having health insurance and make a rational decision that isn’t purely based on economics. People are smarter than that.”

Known as the “individual mandate,” the Affordable Care Act  (ACA) requires most Americans who can afford coverage to buy insurance or pay the tax. About six million people will chose to pay a penalty each year instead of purchasing coverage, federal officials estimate. Foregoing coverage means consumers take the risk of being saddled with high health care bills, one of the primary reasons people declare personal bankruptcy.

Connecticut has an estimated 344,000 uninsured residents with Hispanics comprising 25 percent of those without health insurance, according to state officials. Experts expect about two-thirds of the state’s uninsured will gain coverage under health care reform. Access Health CT – the new online marketplace created by the ACA – begins selling policies to all consumers on Oct. 1 with coverage effective Jan. 1, 2014. Residents with moderate and low incomes are eligible for tax credits and subsidies to offset the costs. Some individuals will be eligible for Medicaid under newly expanded eligibility guidelines.

“It’s an exciting time,” said Alison Flores, a senior analyst for The Tax Institute at H&R Block, which is helping clients determine their potential tax penalty and eligibility for tax credits and subsidies. “People are getting ready. They want to know what their options are from the new marketplaces (such as Access Health CT) and from their employers.”

While every case differs, here’s what you need to know about the penalty tax.

Who Must Pay The Tax?

To avoid paying the tax, individuals must purchase health insurance plans that cover at least 60 percent of their medical costs and include a minimum standard of care known as “essential health benefits” in 10 categories, including hospitalization, maternity care, mental health services, prescription drugs and more.

People who have health insurance through their employer, purchased coverage in the private market or are enrolled in government-subsidized health plans such as Medicare, Medicaid, Tricare (for military families) and the Children’s Health Insurance Program are exempt because they already have coverage.

Individuals with financial hardships do not face the penalty, including those with incomes so low they don’t need to file a tax return or whose coverage would cost more than 8 percent of their income. “Some people who think they may be liable for a payment may qualify for an exemption because they cannot find affordable coverage,” said Flores.

How Much Is The Tax?

The penalty for not having health insurance involves a flat fee based on the size of your household or a percentage of your taxable income, whichever is greater.

While the flat fee “doesn’t seem so scary the first year,” said Flores, “the payment increases each year” and could leave consumers with a “fairly substantial amount” to pay in the future.

Some Connecticut residents mistakenly believe they will gain coverage by paying the tax, said Dr. John Foley, president of the Connecticut State Medical Society.  “That is not true. People should keep in mind that they get nothing in return for paying the tax.”

How Will The Government Collect The Tax?

The first penalty will be assessed when you file your 2104 taxes in 2015 and the amount you owe will most likely be deducted from any potential refund, said Smolnik. You won’t have to pay the tax if you were uninsured for less than three months in a year. But after that, the tax applies for each month you or a member of your household did not have coverage. Documentation to prove that you had insurance during the year will most likely be available from your insurance carrier or employer.

What Happens If I Don’t Pay The Tax Penalty?

For now, the government is counting on “voluntary compliance” among consumers because the law gives the Internal Revenue Service limited power to enforce the individual mandate to purchase health insurance, said Smolnik. Individuals who do not comply with the federal mandate to carry health insurance face no criminal penalties or threat of liens and seizures by the IRS, he said.

“You are not going to jail if you don’t pay the tax,” added Flores.

Where Can I Find Affordable Coverage?

Experts say consumers should weigh their options carefully before foregoing coverage because changes since the ACA have made health insurance more accessible and affordable. For example, insurers can no longer deny coverage to people with pre-existing conditions or charge more for a policy just because you are a woman.

Foley advises uninsured and insured consumers to “keep an open mind” and find out if they qualify for financial assistance with plans sold at Access Health CT. People earning up to 400 percent of the federal poverty line ($45,960 for individuals and $94,200 for a family of four in 2013) qualify for tax credits to help pay premium costs.

In addition to tax credits, people earning up to 250 percent of the federal poverty line ($28,725 for individuals and $58,875 for a family of four in 2013) qualify for government subsidies to help with out-of-pocket expenses.

“There is no down side to getting information,” said Foley.

“People who could not afford health insurance in the past should be able to afford it now. Even people who have insurance through their employer, may very well find good (coverage) options (at Access Health CT) for less and save money.”

Connecticut is also among the states that expanded Medicaid, the federal-state health program for the poor, as allowed by the ACA. Flores estimated that fewer uninsured Connecticut residents might apply for tax credits and subsidies (compared to other states that did not expand Medicaid) because they qualify for Medicaid under the state’s newly expanded eligibility guidelines.

What Happens If I Don’t Have Health Insurance?

Going without health insurance means you are responsible for the total cost of all your medical needs from routine doctor visits, to vaccinations, to hospitalizations. A single incident – such as a car crash, sports injury or sudden illness – can leave you with bills that in some cases lead to personal bankruptcy.

It’s difficult to “place a value on the peace of mind” that comes with having health insurance, said Stephen Frayne, senior vice president for health policy at the Connecticut Hospital Association. “Nobody plans for an illness in their life and nobody thinks it is going to happen to them. But it does. Sometimes, thankfully, it’s an illness of short duration. Other times, sadly, it could be something more substantial, chronic and lifelong.”

“You buy automobile insurance. But you don’t plan on having a car accident,” he said. “The same is true for health insurance. Hopefully everybody will come to the conclusion that it’s something you’ve got to have.”

For information on the state’s online insurance marketplace go here.

One thought on “Should You Take The Health Care Tax Hit?”