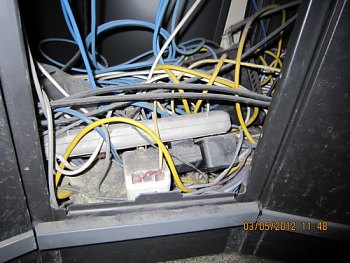 Dust behind a workstation.

They might come to work feeling OK, but soon develop chronic coughs and sneezing, scratchy throats, itchy eyes and even headaches. No one can find the mold they think is causing their symptoms. Unsympathetic colleagues say they feel just fine, so there can’t be anything wrong.

The problem is surprisingly simple, says Sauvageau, an occupational hygienist with CONN OSHA – the state Department of Labor’s Division of Occupational Safety and Health.

The impact is staggering. The Environmental Protection Agency estimates that poor indoor air quality costs tens of billions of dollars annually in lost productivity and added health care. One study by the Lawrence Berkeley National Laboratory in 2010 concluded that improving workplace environments could save businesses $300 per worker each year.

In the past 14 months, Sauvageau has investigated 20 complaints filed by people who thought mold was compromising the air quality in their workplaces. Of hundreds of samples he collected, only one had mold levels that were considered significant.

Solutions require everyone in an office to work together in ways they haven’t had to before, said Paula Schenck, assistant director of the Center for Indoor Environments and Health at the University of Connecticut Health Center. “It takes a team,” she said.

Workers, their union reps, building owners, managers and cleaning staff all have to buy into the solution, said Ken Tucker, director of CONN OSHA.

“We do know air quality is a growing problem,” said Larry Dorman, spokesman for Council 4 of the American Federation of State, County and Municipal Employees in New Britain. “It’s one of the hidden dangers of the workplace.”

The union has worked with the state and with several municipalities on air quality in buildings ranging from schools in Bridgeport to police headquarters in Hartford. Workers are often unaware of the hazards. “And employers don’t tend to be proactive on issues like that. Sometimes it’s not their fault,” he said, noting that the state leases much of its office space.

Mold can be highly hazardous, Schenck emphasized. But people should look first for more obvious culprits if they don’t smell mold, can’t see water stains on walls or ceilings, and aren’t aware of any dampness or water from leaks, seepage or humidity.

“People go nuts about mold because it’s been so publicized, and I appreciate the concern,” she said. “I always talk about three things: ventilation, moisture and dirt/dust.” Mold, she said, is always related to a water problem. “What mold tells you is there’s water where it shouldn’t be, and a biological material is growing.”

Dust is such a prevalent problem, Sauvageau made it the topic of an article in CONN OSHA’s May newsletter. (click here to read). There is no doubt about its irritating effects. People have different tolerances for the mites, pollen and spores in dust that builds up. Those who are sensitive have allergic reactions. Those who aren’t might think that nothing is wrong. The location of someone’s workspace can also aggravate their symptoms.

None of this is a surprise to Ray Cassarino, owner of Cassarino Commercial Cleaning in Wethersfield.

“I go into an office and the women are sneezing, especially at the reception desk. It’s a haven for dust,” he said. Cassarino lifts the phones, looks at the wires behind the computers and checks under small equipment like fax machines. He can tell how long the dust has been there by how it clumps up. “It’s sick what I find,” he said.

Symptoms like itchy eyes, a runny nose and headaches can be caused inadequate ventilation and by dust and dirt because the respiratory system is being irritated. People feel better once they leave the environment, Schenck said. Asthma-like symptoms, such as difficulty breathing, are harder to diagnose as building-related. Breathing can be affected by a wide range of irritants – including mold. Prolonged exposure to some of the contaminants in dust can also cause asthma-like symptoms.

Sensitivity and exposure make all the difference. Schenck recalls one woman who complained that the vent above her desk was blowing air onto her. The custodian, trying to be helpful, diverted the flow with a piece of plastic. The woman became ill and couldn’t understand why – after all, the air wasn’t blowing on her any more. A UConn hygienist took a “wipe” sample from the plastic and discovered it was loaded with bacteria and mold.

When Sauvageau goes into workplaces, he finds congested offices and desks loaded with clutter. Storage spaces are too small, so supplies and equipment are piled in work areas. Heating and air conditioning equipment isn’t maintained and cleaned. The walls and floors behind heating units and desks are filthy. Furniture obstructs ventilation or makes it hard for the cleaning staff to do their work. People don’t want anything on their desks or shelves moved, which also makes cleaning difficult.

Some buildings – hospitals, factories and schools, for example – are now courthouses, town halls and offices. They weren’t designed for that use. Balancing the ventilation and keeping the space clean can be a tremendous challenge.

Cassarino said many companies have cut back on spending for custodial services. They have unrealistic expectations of how much can be done in a limited time with a limited budget.

“It’s a bidding war,” Cassarino said. He suggests that business and building owners carefully evaluate not only cost, but the level of service they’ll receive.

Sauvageau wants employers to realize that poor air quality can affect employee attendance, productivity and morale. Some of the people who called CONN OSHA were facing disciplinary actions for missing work too often because of their illnesses. They had been diagnosed with sinus infections, bronchitis, allergies and asthma.

Building managers have a hard time because people like different temperatures and have different tolerances for air flow. Generally, Schenck said, it’s not good to cut down on ventilation. That lets contaminants accumulate. She also discourages the use of scented air fresheners because they irritate some people.

That, she said, is the kind of “joint responsibility” that’s required to create a healthy environment. For their part, workers need to be vigilant about their own space, and they need to make sure that what they do doesn’t diminish air quality for their office-mates.

If you are having problems, Schenck and Sauvageau suggest you:

• Act promptly, as prolonged exposure can lead to chronic symptoms.

• Start by defining and tracking your symptoms. What time of day do you have them, and where are you?

• Try to correct the problem through your supervisor and union reps first. Consider breaking down the office and doing a thorough cleaning. When dust is the problem, symptoms often improve immediately.

Managers can contact the Occupational and Environmental Health Center at UConn. Yale also has a center.

CONN OSHA does free and confidential air quality consultations for any Connecticut employer. There are no penalties or citations. Enforcement officials won’t be told of any problems unless an employer refuses to correct a serious violation of OSHA standards. Call 860-263-6900 to request a consultation.

One thought on “Office Inspections Raise Some Dust”