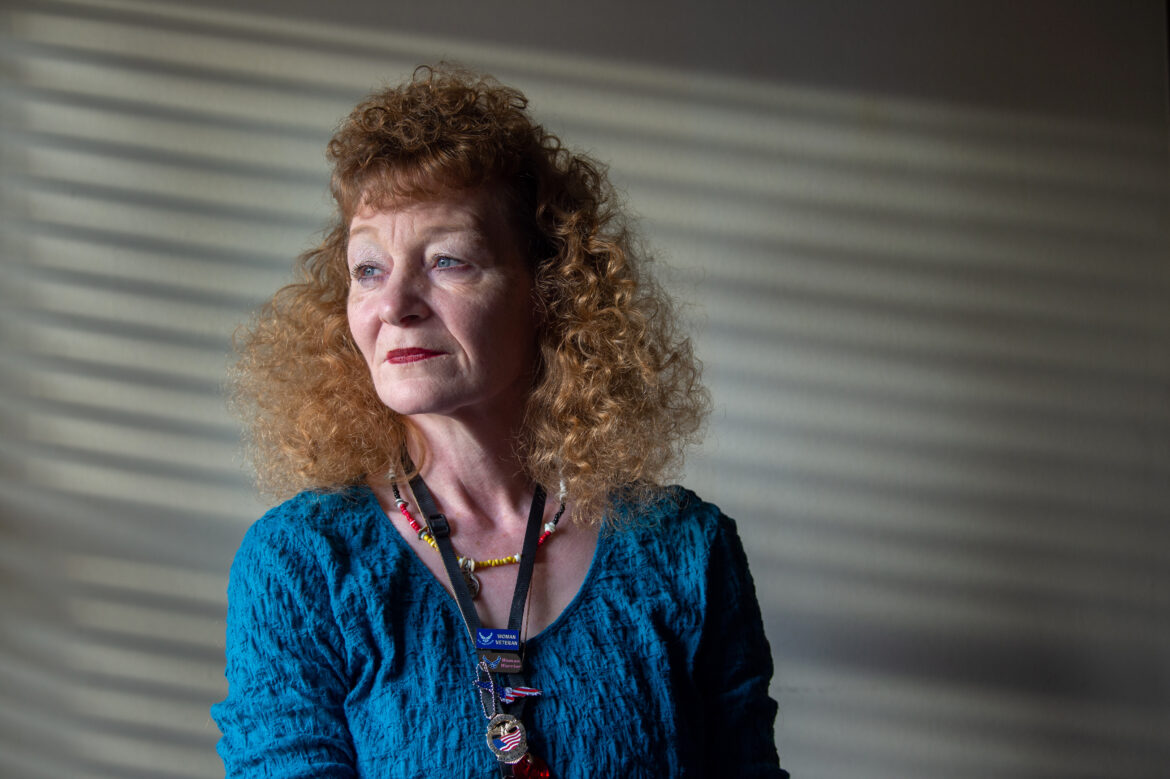 Linda Davidson was the victim of multiple sexual assaults while serving in the Air Force. Davidson is pictured in her home in Vernon. She is speaking out to help others.

After being raped multiple times in the military, Linda Davidson feels so defeated that she has tried to take her own life. “Every day, I look in the mirror, and I hate what I see,” said the Air Force veteran.

“I’ve been destroyed by serving my country and am tired of fighting an endless battle,” said Davidson, who suffers from depression, anxiety, Post Traumatic Stress Disorder, nightmares, and suicidal ideation. None of her attackers were charged or punished, she said. She served from 1988 to 1995.

Decades later, the Vernon resident wants to talk about her assaults “because no one else should go through anything that I experienced. I want to advocate for other women who experienced the same. It’s got to stop.”

A total of 8,866 service members reported sexual assaults in fiscal 2021, a 13% increase from 2020, according to a Department of Defense (DOD) report. However, the reporting rate has decreased in recent years, dropping to one in five survivors reporting sexual assault in 2021 compared to one in three in 2018 and 2016.

“Less than half of women perceived their leaders as acting in a fully supportive manner after they reported” unwanted sexual contact, the report states.

The DOD reported that 8.4% of active-duty women and 1.5% of men said they experienced unwanted sexual contact. Based on those rates, the DOD estimates that 35,875 service members were victims of unwanted sexual contact in 2021. This compares to 20,500 in 2018 and 14,900 in 2016, the most recent years prevalence estimates were made. The number of men sexually assaulted more than doubled in three years, with about 16,620 men sexually assaulted in 2021 compared to 7,500 in 2018, according to the report.

Advocates expressed hope that new laws will prompt more reports and increase prosecutions. A proposal to strip significant roles of commanders in cases of sexual assault and other felonies was given final approval by the Senate this week. It strengthens reforms passed by Congress last year that will require prosecutorial decisions for those crimes to be made by independent military prosecutors.

The law that was passed last year retained commanders’ authority over several aspects of the felony judicial process. That “makes the system susceptible to bias and undermines trust,” U.S. Sen. Kirsten Gillibrand, (D-NY) said in a statement.

To shine a light on the military judicial system, a lawsuit has been filed in U.S. District Court in Connecticut to obtain military prosecution data for sexual assault and other serious crimes. The plaintiffs are the Connecticut Veterans Legal Center (CVLC) and Protect Our Defenders, a national advocacy organization. Yale Law School’s Veterans Legal Services Clinic is representing the plaintiffs.

“We already know that sexual assault is under-prosecuted across the board,” said Alden Pinkham, a CVLC attorney. “It’s possible the military is doing less,” she said.

Last May, the plaintiffs asked the military for the data under the Freedom of Information Act, and only the Marine Corps has provided information. So that comparisons can be made, they are also seeking data from civilian prosecutors near military bases in New York, Virginia, Texas and California on how they handle criminal prosecutions of military members, Pinkham said.

Davidson, 53, said the military needs to “heavily reconstruct the legal system and how they punish violators.” She also called for women to have a more significant role in the military judicial system.

She was 18 years old and serving as an enlisted member at Travis Air Force base in California when she was gang raped by five officers and two enlisted men. At a party, they spiked her drink with a drug, then moved her to a motel where they taped her mouth, tied her hands, and took turns raping her while cheering each other on, she said. A motel housekeeper found her the next morning and called the military police, who brought her to a hospital.

While serving in Japan, her job was to order supplies. Her commanding officer forced her into a warehouse and raped her. “He told me that if I told anyone, that I would never live to see another day,” she said.

Davidson was also raped in Japan by an enlisted man. “I was assaulted even though I said, ‘No,’” she said. She reported the attacker to her sergeant. “He told me he would take care of it. But the abuse kept happening,” she said.

Davidson had planned to make the military a career, but the sexual trauma she endured caused her to change her mind. She contracted a sexually transmitted disease (STD). “I can’t have children because of what they did to me,” she said.

“I’m in this battle ever since because these people had the power to do whatever they wanted,” she said. She recently retired from the Hartford distribution center of the U.S. Postal Service. 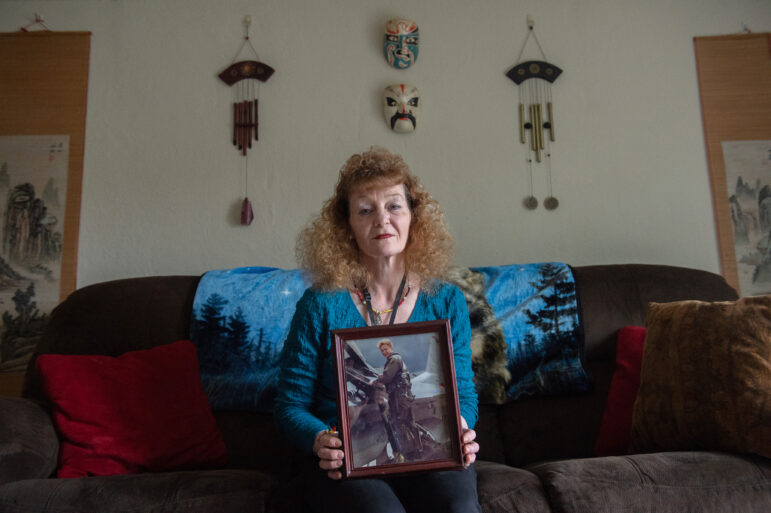 Davidson, an Air Force veteran, holds a photo of herself while on active duty. She served from 1988-1995.

Renee Mihail is a Yale law student working on the federal FOIA lawsuit and is a U.S. Army veteran. She said that she has seen “a lot of slut shaming of the victim” and “maneuvering to belittle the survivors” of sexual abuse. She said when a complaint is made, “at the end of the day, nothing really changes.”

She said perpetrators often “keep their position. They keep their rank. They are just slapped on the hand.”

“A lot of survivors want to see that it’s taken more seriously than that and that they’re respected, that they’re believed,” said Mihail, a West Point graduate.

The reforms awaiting Senate action are part of the $858 billion National Defense Authorization Act (NDAA) and include strengthening of sexual harassment laws. Independent military attorneys, instead of commanders, would decide whether to prosecute and all sexual harassment claims would be investigated by trained civilians.

Military sexual harassment, a risk factor for sexual assault, encompasses unwanted sexual advances, requests for sexual favors, and deliberate or repeated offensive comments or gestures of a sexual nature. “The odds of experiencing sexual assault increased threefold for women and tenfold for men who also indicated experiencing sexual harassment in the past year,” according to the Pentagon report.

U.S. Sen. Richard Blumenthal, a Democrat, worked on the legislation as a member of the Senate Armed Services Committee. He said it “marks more progress toward an independent and credible military justice system.”

However, he said “there’s still more to be done more than 10 years after we began this fight for reform” such as ensuring strong penalties to replace what he sees as “greater leniency than is necessary” toward offenders.

“This reform effort will continue with undiminished fervor because the problem is still a raging scourge as the statistics show,” he said.

The earliest effective date of military justice provisions in both last year’s law and the pending bill is December 27, 2023. The delay is a point of contention. “Sexual assault is not going to pause. It’s going to keep happening,” said Chelsea Donaldson, a CVLC attorney. “So, what is their contingency plan to help these people and protect them from now until then?” she asked.

Donaldson has worked with 41 survivors of military sexual trauma in the past four years and said it “can completely upend somebody’s life.”  She said the trauma “catches up to them” and can result in mental health crises, suicide attempts, job loss, homelessness and the destruction of marriages and relationships.

President Biden has proposed $940 million in his 2023 fiscal year budget for military sexual assault prevention and response programs that would entail hiring more than 2,400 people to implement them. Defense Secretary Lloyd Austin, a Biden appointee, has said addressing sexual assault is a top priority of his department. 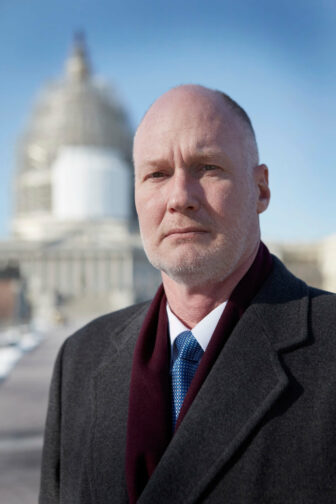 Col. Don Christensen, president of Protect Our Defenders, praised the efforts of Biden and Austin. But he expressed concern about whether the generals and admirals, who have long opposed changing how the military handles sexual assault, would ignore or sabotage reforms. “A lot of them see it as a politically correct issue versus a real issue,” he said, pointing out that they will play a role in selecting the independent prosecutors.

He supports more changes to the military justice system, including ensuring that victims have access to their own statements and forensic analysis, requiring unanimous verdicts by military juries instead of the current three-quarters, and expanding sentencing options. The NDAA bill includes a one-year study on providing victims access to their statements and forensic results.

“The sentencing process is almost identical to what George Washington had. It needs to be modernized,” he said.

For the suicide and crisis hotline, dial 988.  Services are available 24- hours a day.

For the veterans crisis hotline, click here or text 838255