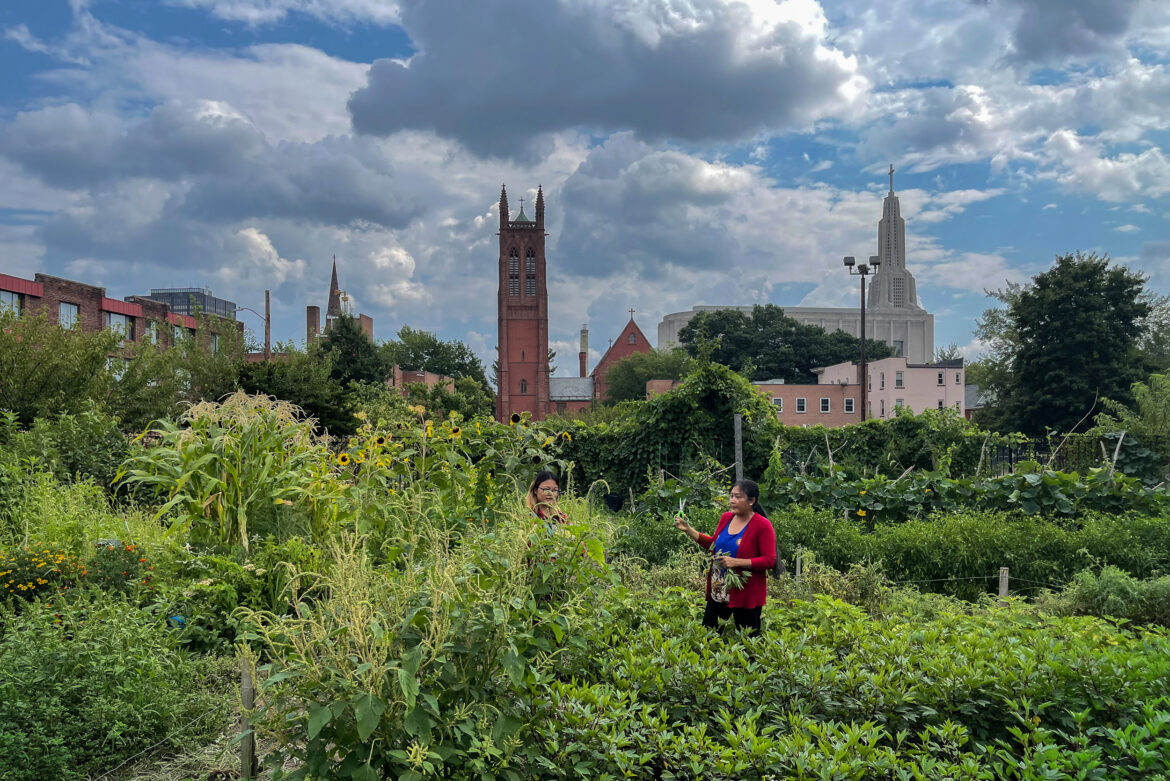 At the Niles Street Community Garden in Hartford, Maaye May uses scissors to cut leafy papaya greens that she uses to garnish soups and sauces. In Hartford’s food desert, she and her family grow hot Thai chili peppers along with an assortment of fruits and vegetables. At center is May’s daughter, Nyay Nyay Aye, 20. In the background are the steeples of Trinity Episcopal Church, at center left, and the Cathedral of Saint Joseph, at right.

On a September weekday morning, Maaye May removes the lock and chain from one of two gates and enters the Niles Street Community Garden in Hartford. A 6-foot high, black-metal fence encloses the garden, which measures half the size of a football field. Within the gated oasis, the city surroundings slip away as bees, birds, flowers, fruits and vegetables begin to dominate the senses.

May, 41, has an hour and a half to pick Thai chili peppers before driving to her part-time job washing dishes in East Hartford. She disappears into a green hedge, filling a small blue bucket with red and green chilies. Her daughter, Nyay Nyay Aye, 20, interprets as May, smiling, says in her native Karen language that she dreams of living in a rural part of Connecticut where she can grow her beloved hot peppers and maybe raise a few chickens or pigs. It is a way of life she lived in Myanmar before fleeing that country’s unrest and landing in Thailand. The Karen people comprise several ethnic minority groups in Myanmar (formerly known as Burma) that have been historically persecuted by the government. 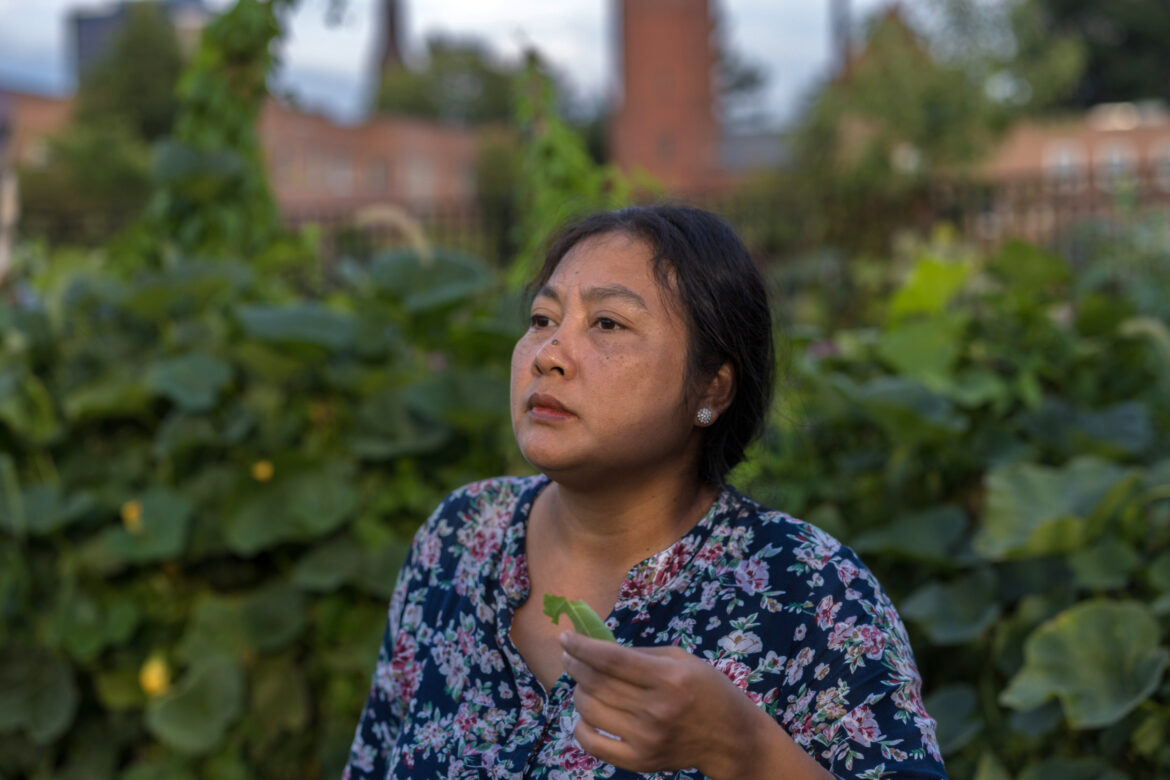 May holds a papaya leaf as she takes a break from weeding her garden. May, a Karen refugee who came to Hartford from Thailand in 2010, fled civil unrest in Myanmar with her family and lived at a refugee camp for about a decade. The Karen people have embraced the KNOX, Inc. community garden program.

Aye’s parents met at the Mae Ra Moe camp in Thailand, where she and her two younger brothers were born. In the nearby mountains, a short walking distance from their hut, May and her husband, Ma Nar, were allowed to grow their own crops, including chili peppers. The diverse Karen culture is based primarily on farming.

“It’s fresh. Right now is a good time to eat it,” says May in English, pointing to her bounty of African eggplant, papaya greens, tomatoes and zucchini. Leafy greens are good for your eyes, she says. Blossoming pumpkin and squash vines climb the fencing nearby. 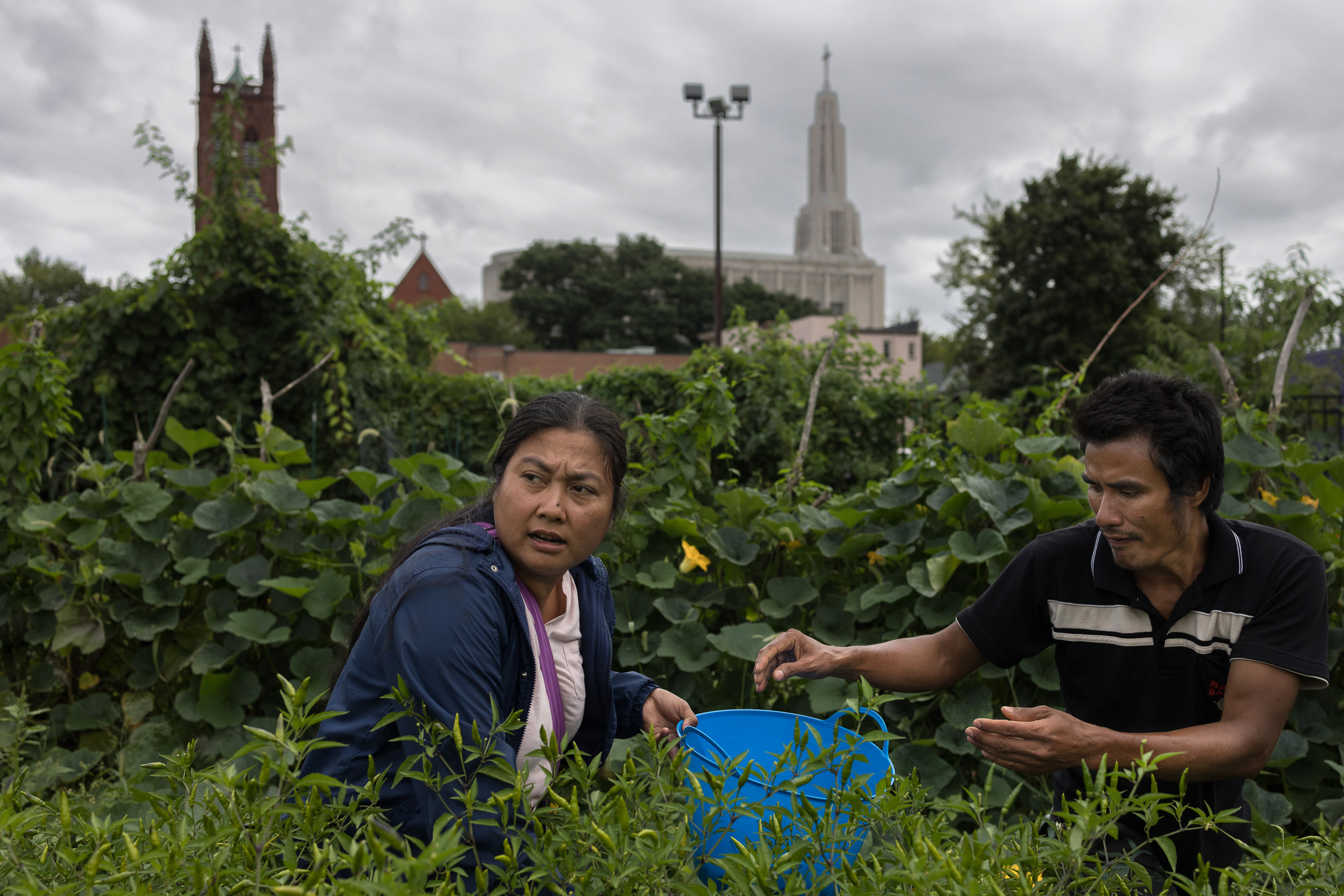 May works in the community garden alongside her brother, Maung Maung, 37. Scroll the gallery to view Patrick Raycraft's photos 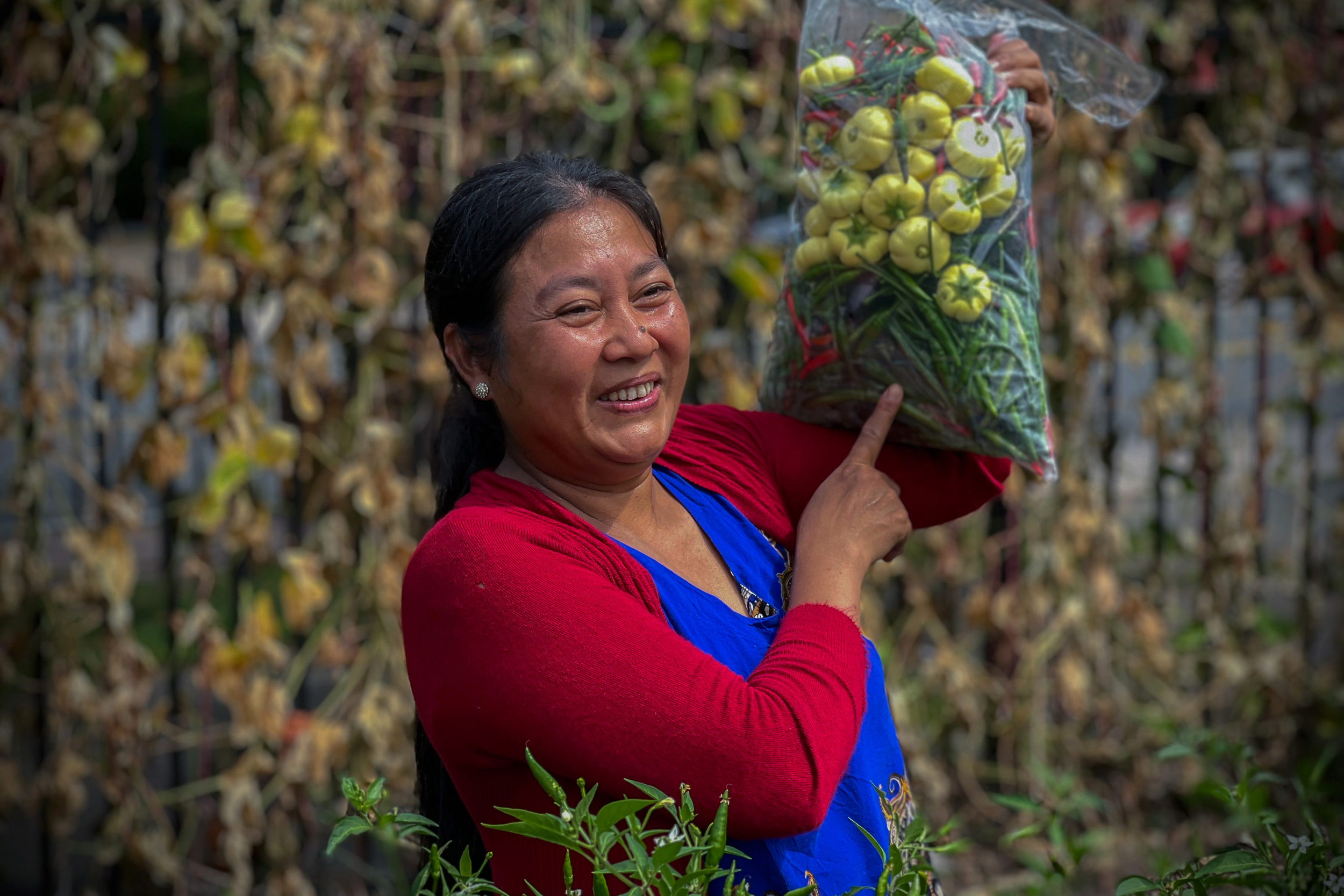 May displays some of her garden’s bounty, including hot Thai chili peppers and African eggplant. The Karen community has embraced the KNOX community garden program whose motto is “People - Planting – Programs.” 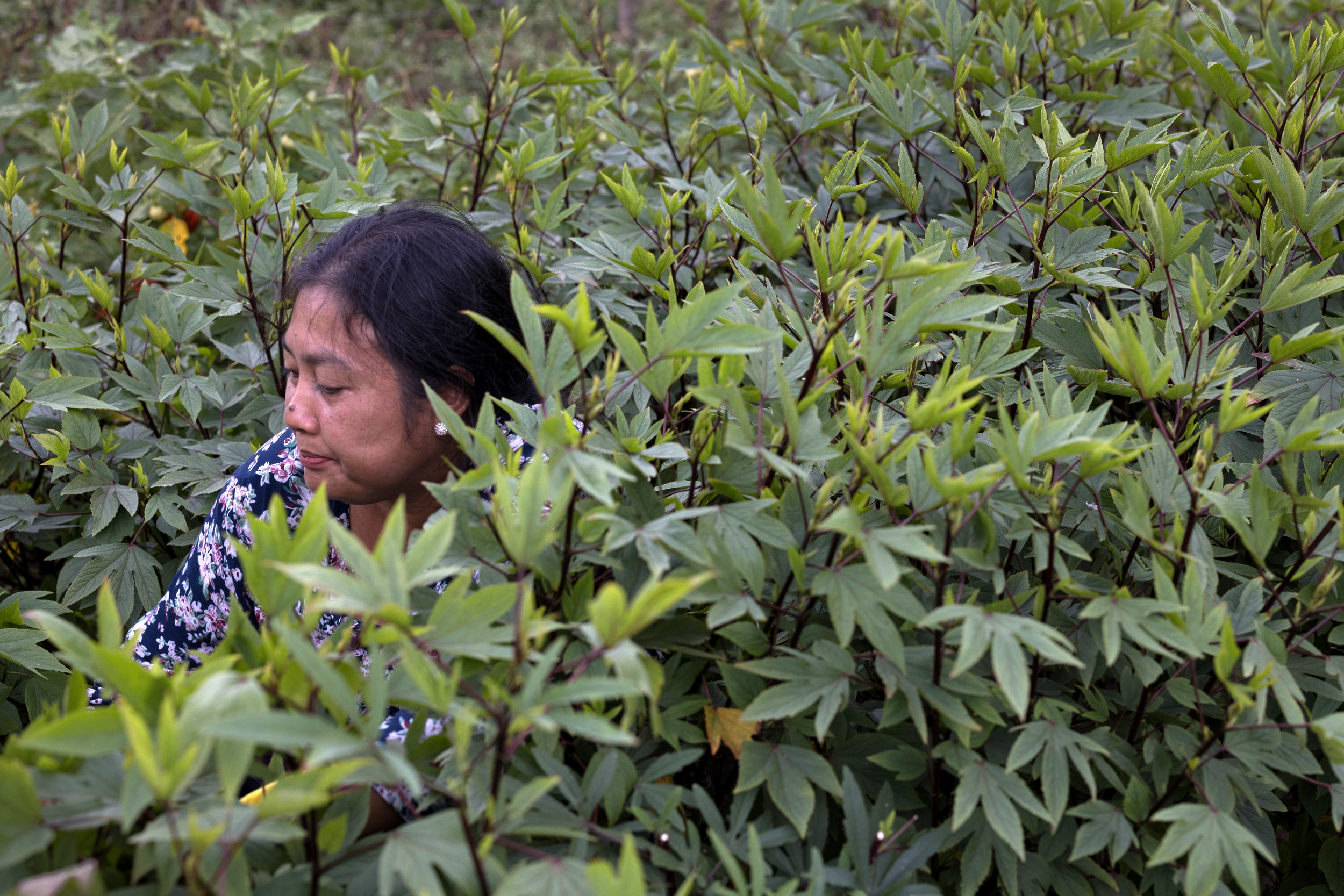 May weeds a bed of roselle, which are used in salads. The Karen culture is based on farming. 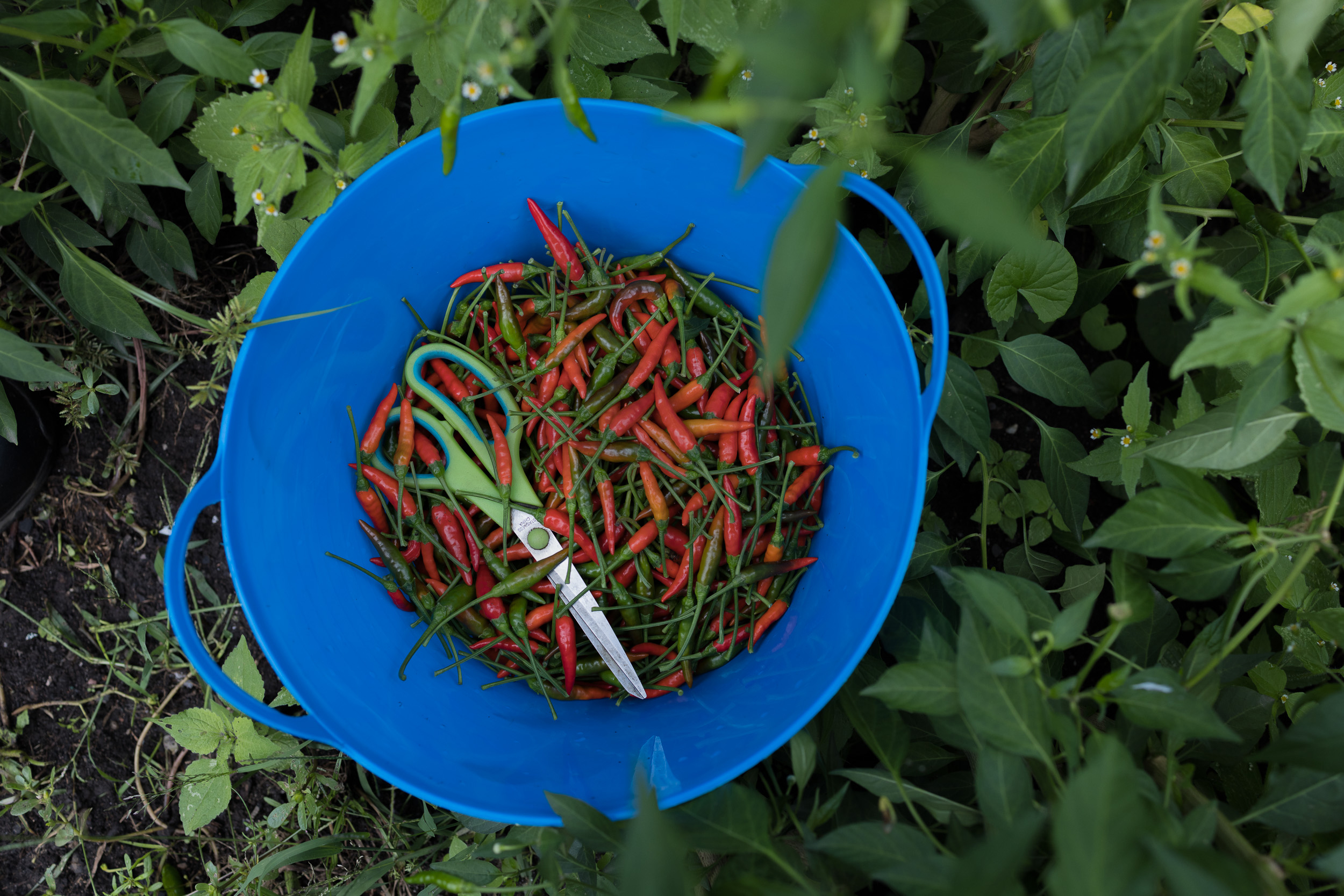 The chili peppers are dried in the sun and then made into a chili paste. May and her husband, Ma Nar, grew hot chili peppers outside their refugee camp in Thailand. 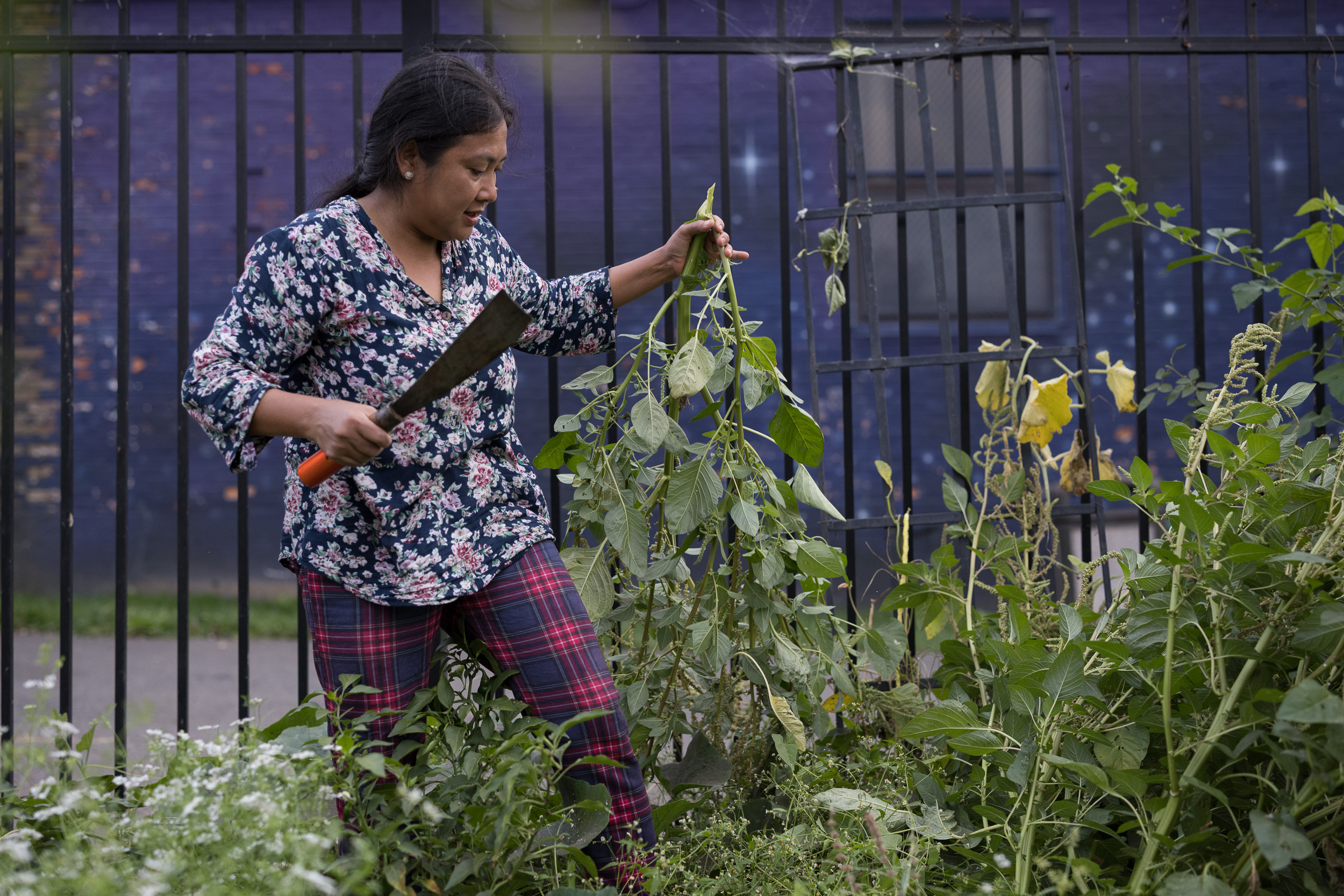 May uses a machete just like the one she used in Thailand for weeding. 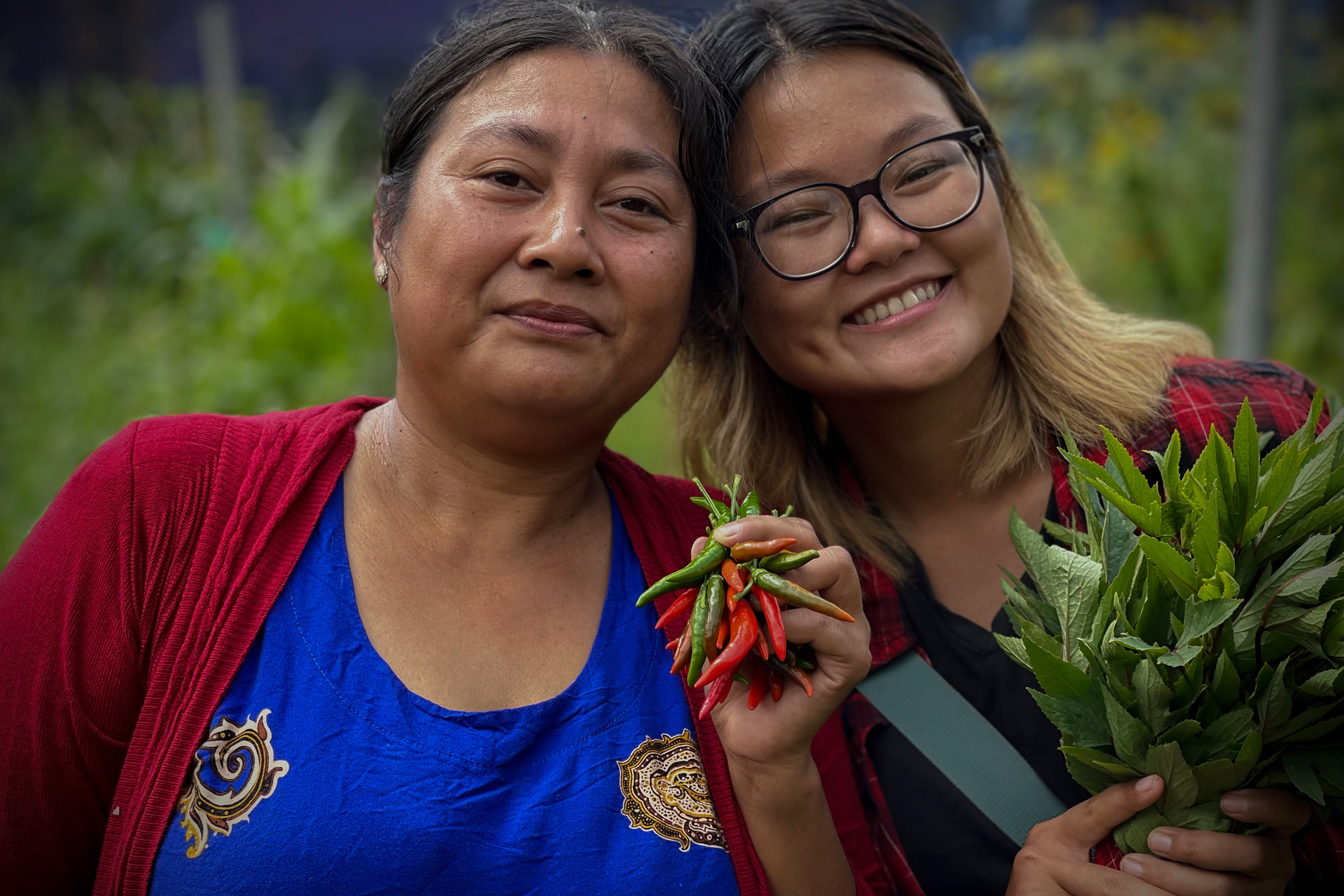 May, and her daughter, Aye, display some of their garden’s bounty. 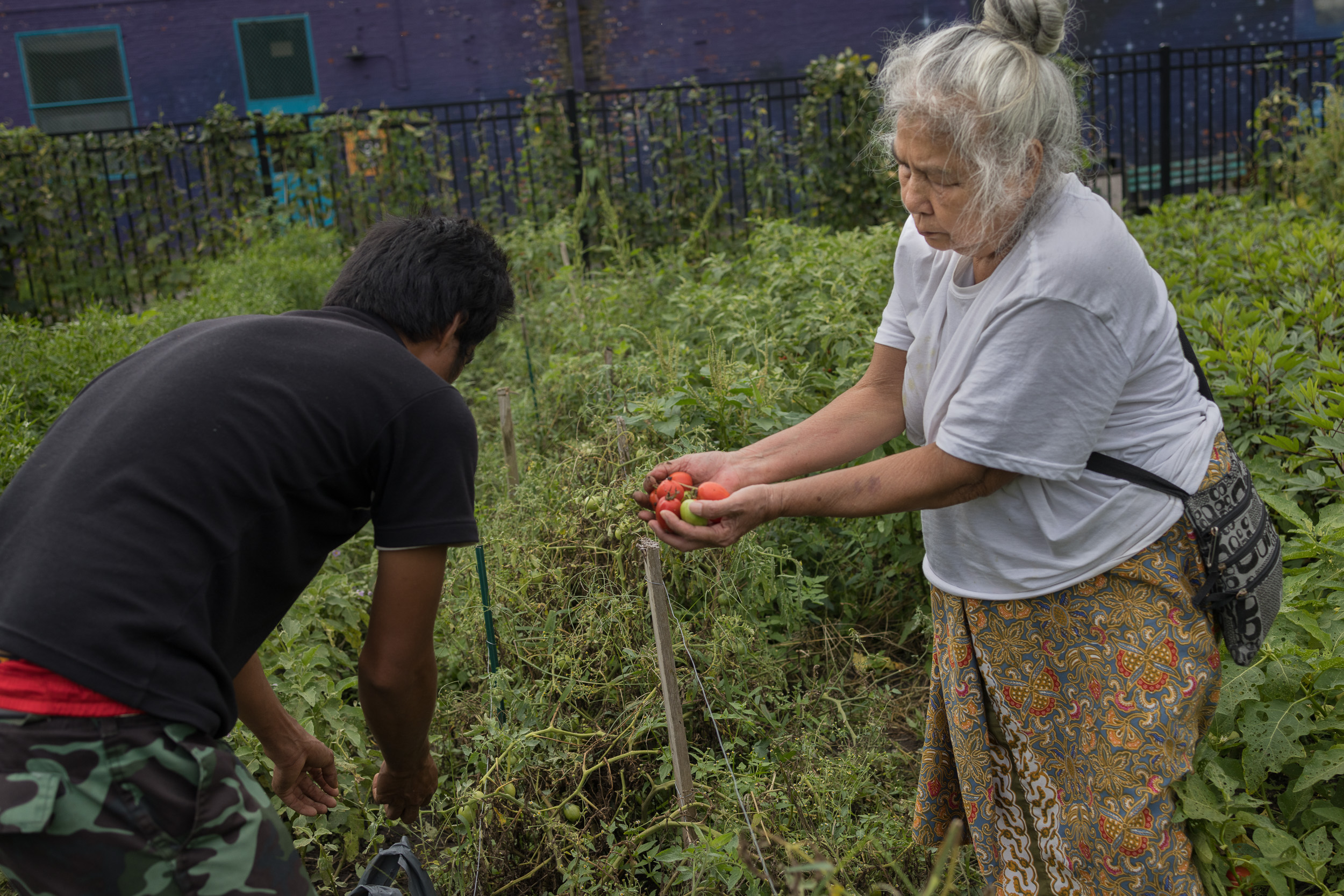 Ma Aye Than, 72, mother of May and Maung, helps pick the ripe cherry tomatoes. 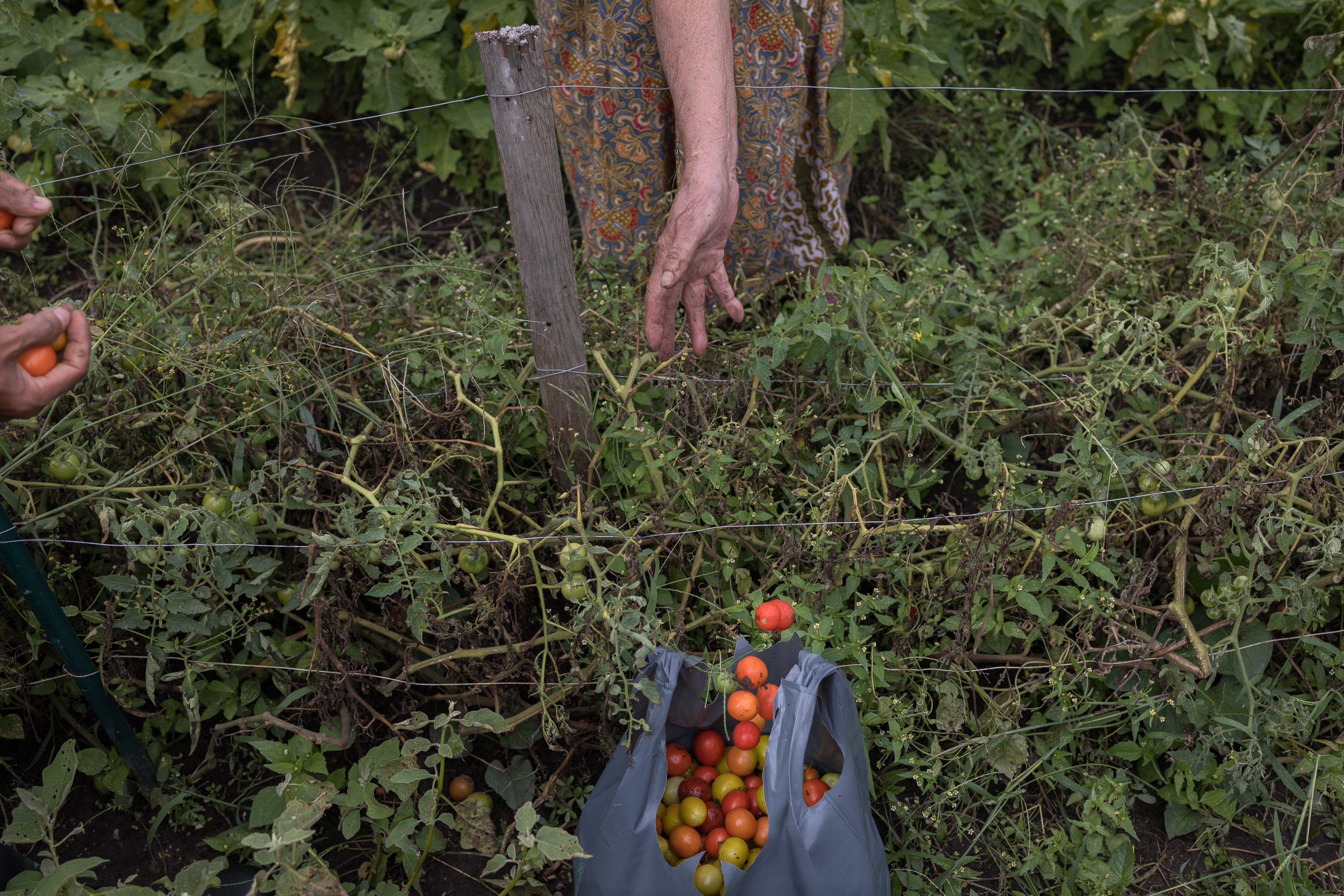 Even with drought conditions, the tomato harvest was plentiful. 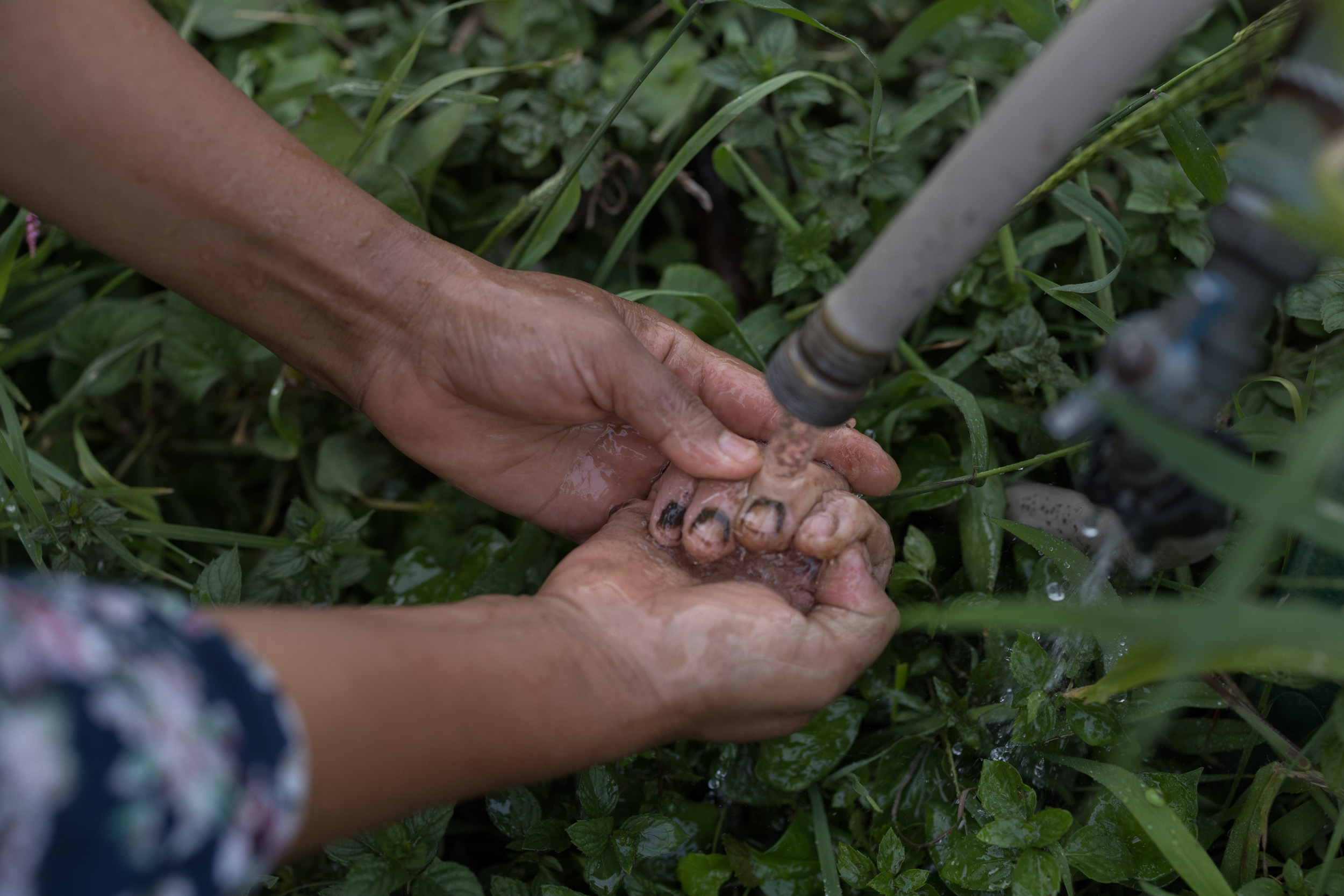 May rinses her hands after a few hours of weeding. The summer drought was not as severe for May since her $30 KNOX gardening fee includes use of water to irrigate her family’s crops. 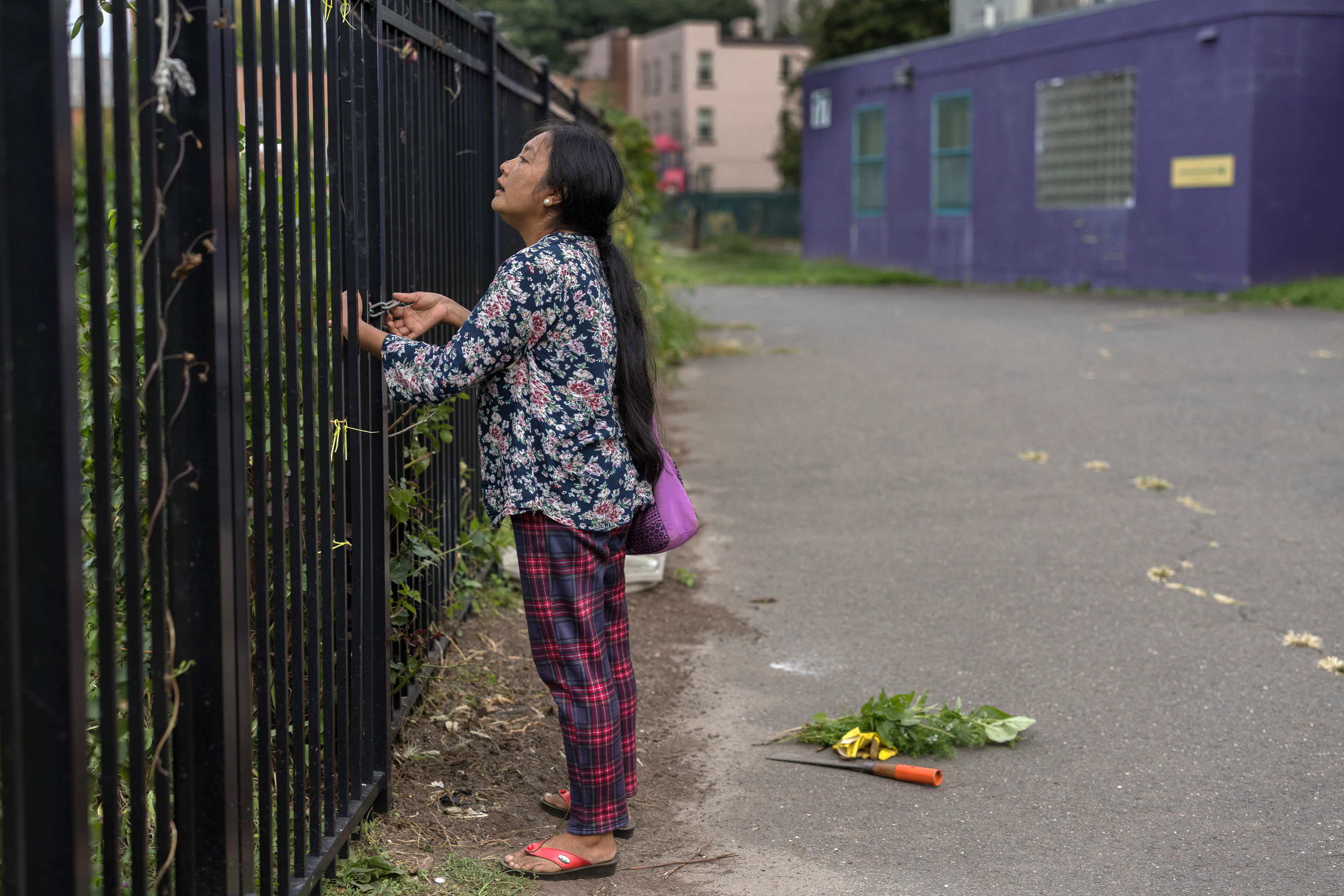 May locks the gate after spending a few hours weeding. A six-foot high, black-metal fence encloses the garden which measures half the size of a football field.

As for her hot Thai chili peppers, May says she needs to eat them every day. After drying them in the sun, her family can enjoy crushed dried chilis throughout the year. She also makes chili paste.

When Karen families were resettled in Hartford, KNOX Inc. helped them navigate their farming needs within Hartford’s food desert. KNOX embraced their need to farm and for equitable access to food by providing plots at its Laurel Street headquarters. Father Daniel Akho, a Catholic priest and Karen refugee, initially served as the interpreter and guide for Hartford’s Karen refugees. Most families lived in a large apartment building on South Marshall Street about two blocks from KNOX and within walking distance of their garden plots.

May shares her produce with her extended family and others in the local Karen community. Seeds are carefully saved for the next growing season. Much of the produce is frozen in two large freezers and can be preserved for up to a year, says Aye. Papaya leaves and Roselle greens, for example, are used to garnish soups, sauces and salads, which are served with rice or noodles and accompanied with tuna or sardines.

KNOX’s mission is to make connections through plants, says Beth MacDonald, KNOX education and volunteer manager. “They’re nurturing their bodies and also their minds,” MacDonald says about the community gardeners who are guided by the nonprofit’s “People – Planting – Programs” motto.

KNOX operates 21 community gardens in Hartford. City residency is not a requirement to rent one of the 500 plots located primarily in the North End. In fact, most of the 300 to 400 gardeners don’t reside in Hartford, says Jennifer Martinez, KNOX community garden coordinator.   May and her husband own their home on Flatbush Avenue. 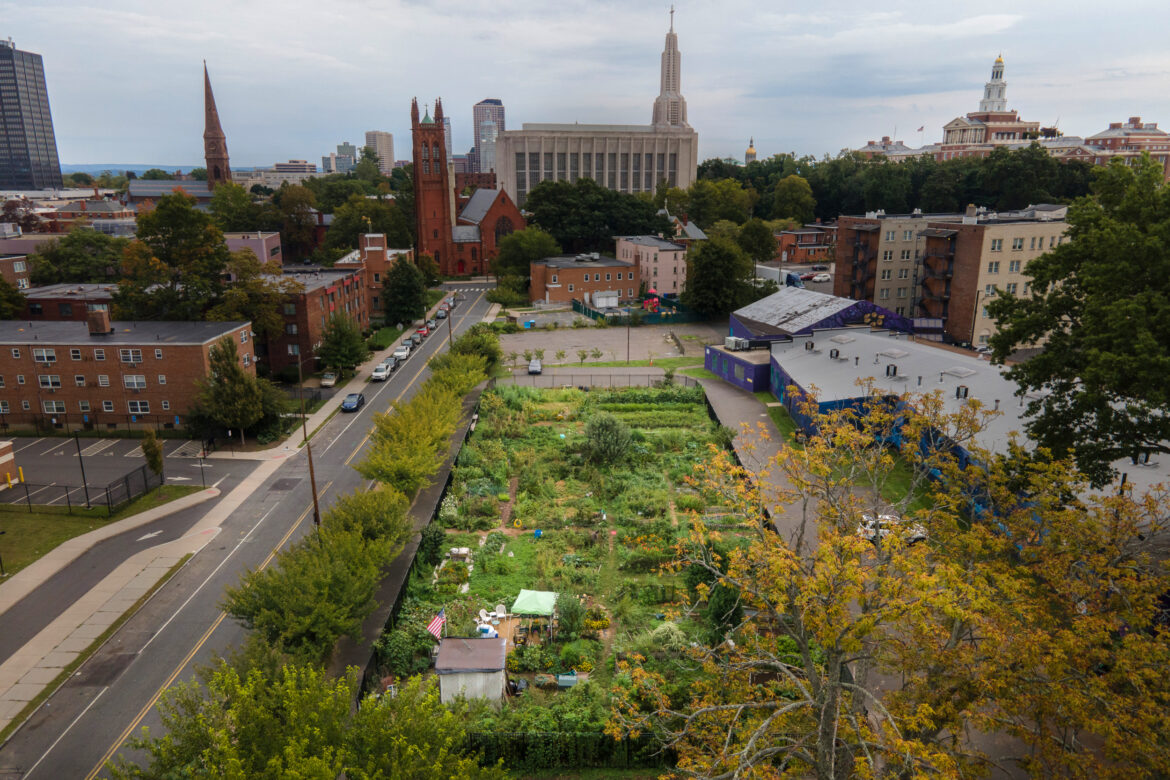 A $100 greenhouse fee provides gardeners like May with greenhouse space, potting soil, seeds, heat and water from January to April. An additional $30 fee is due in early March to rent a seasonal garden plot. KNOX provides compost, wood chips, water, maintenance, and liability insurance. The season wraps up in November, and the gardens are cleaned up and readied for the next growing season.

Farming workshops are also offered, and the Karen people often share their ancient farming wisdom and knowledge with KNOX. A few of the plants grown by the Karen community were previously unknown to the KNOX staff.

As Martinez said, “I learn from them.” 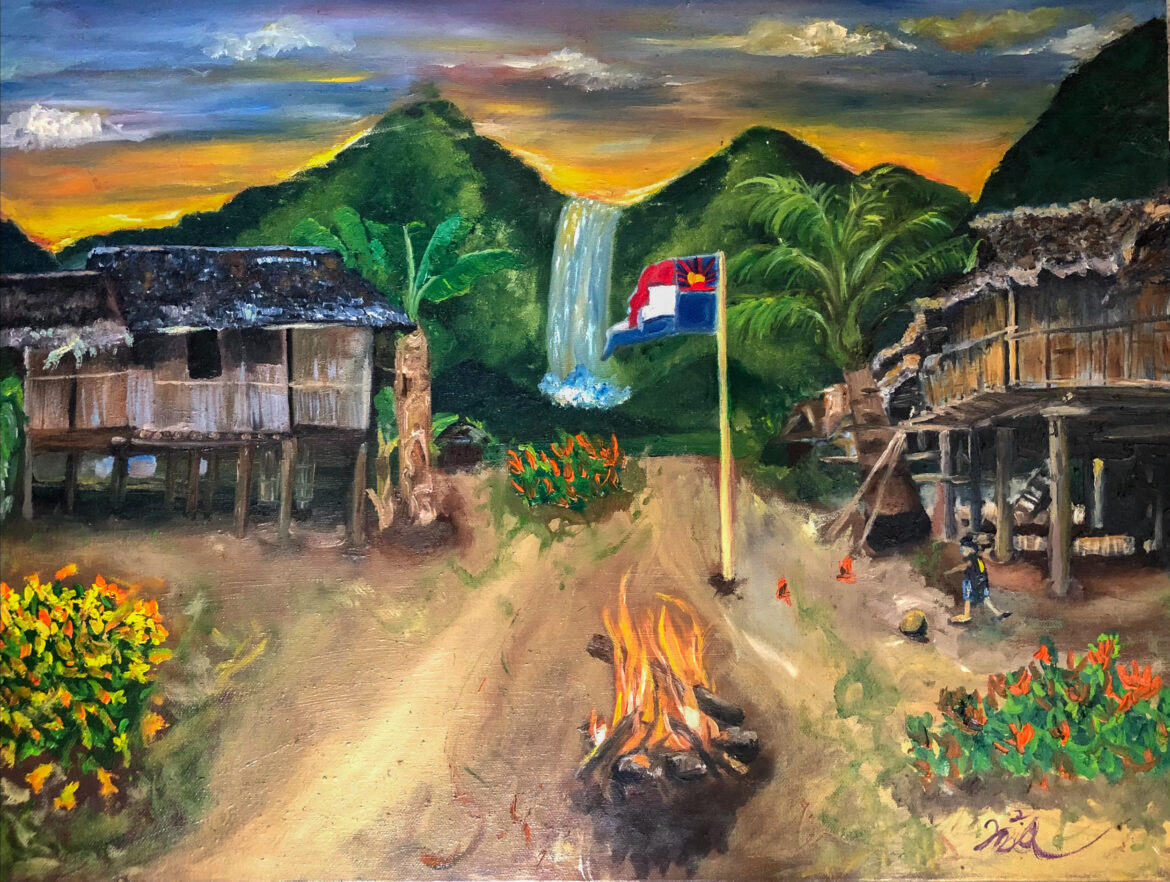 An oil painting by Maaye May’s daughter, Nyay Nyay Aye, a sophomore art major at UConn, evokes the beauty and vivid memories of the Mae La and Mae Ra Moe refugee camps in Thailand. A waterfall is framed by mountains and the Karen flag appears in the foreground. Aye says water and mountains are symbolic of the Karen land and culture in Myanmar.