More than 1,000 Connecticut children under age 6 were reported poisoned by lead in 2020, according to a report released this week by the state Department of Public Health (DPH).

Of the children tested that year, 649 were new cases. 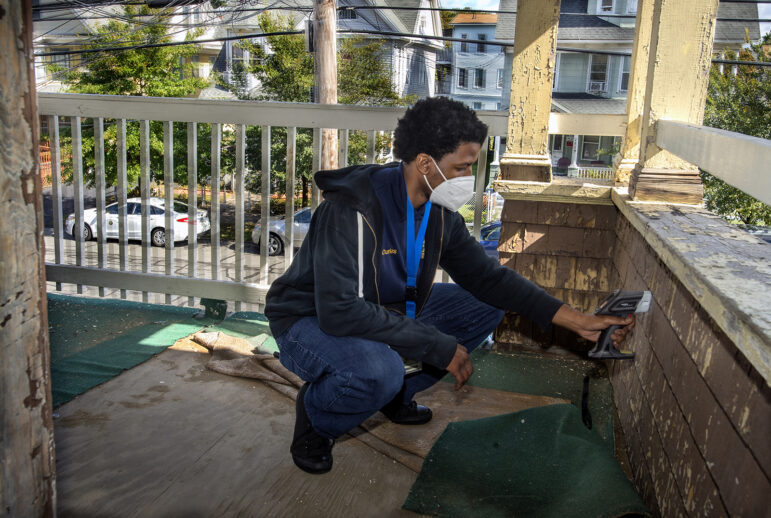 In October 2020, Charles Tate, a Bridgeport lead inspector, scanned the peeling side of a second-floor porch and found high levels of lead in the paint.

DPH Commissioner Manisha Juthani, M.D., said Tuesday, “Protecting the youngest residents of our state from lead poisoning is a priority for DPH. And even though the numbers show that we are heading in the right direction, our work — including linking families to vital resources and building awareness in our inner cities — is far from done.”

But these latest numbers are based on a calculation that the U.S. Centers for Disease Control and Prevention (CDC) and the state have used since 2012. That calculation defines lead poisoning as 5 micrograms of lead per deciliter of blood in a child’s body.

In October, the CDC lowered its definition of lead poisoning to 3.5 micrograms per deciliter.

If the state had used the CDC’s new measurement, or “reference value,” the number of Connecticut children considered lead poisoned would triple, to 3,000.

Even without the CDC’s adjustment, the pandemic complicates how to compare the numbers released to those from earlier years.

Although lead poisoning is notoriously linked to the water crisis in Flint, Mich., in 2014, lead poisoning in the Northeast and in other older parts of the country is usually the result of deteriorating interior and exterior house paint.

For close to a century, before the federal government finally banned its use in 1978, lead was added to paint to increase its durability. Although walls may be painted over, chips from the degrading paint can be leaded. Of particular concern is leaded paint dust, created as paint breaks down and is left behind when doors and windows of older homes are opened and shut.

Babies and toddlers are particularly vulnerable to deteriorating paint because they are close to the ground and their breathing rates are higher than that of adults. And, as any parent knows, young children typically explore their new worlds, quite literally, through hand-to-mouth activities, turning a floor with leaded paint chips and leaded dust into dangerous terrain.

Exposure to the heavy metal, particularly during these early years when children’s brains are developing, can cause permanent cognitive damage, including an irreversible loss in IQ points. The toxin is also linked to speech and developmental delays, hearing loss and hyperactivity.

Scroll below to read the 2020 childhood lead poisoning report.