Johanna Vasquez, 19, and her 4-month-old baby ended up at Malta House in Norwalk as a result of an abusive relationship. Vasquez’s boyfriend hit her, she said, because he was home without a job and “was stressed.”

In Hartford, Bridget Puntiel, a youth, mostly rides the buses day and night to stay safe. “I’m on the street [because] the shelters are flooded,” she said.

Samiah Nikole, 16, thought she had a place to live – until she had to find another due to her boyfriend’s mother’s asthma.

Although their circumstances are varied, these three young women have one common denominator – the coronavirus pandemic.

A new statewide survey by the Youth & Young Adult Taskforce of the Reaching Home Campaign found that 100% of the 25 respondents experiencing homelessness or housing instability reported a worsening of their situation post-pandemic. The youngsters, all under the age of 25, consisted of 72% Black, 20% Hispanic, Latino or Spanish origin, and 28% white individuals. Slightly more than 50% experienced eviction or are at risk for eviction, and 40% experienced family violence or physical abuse. 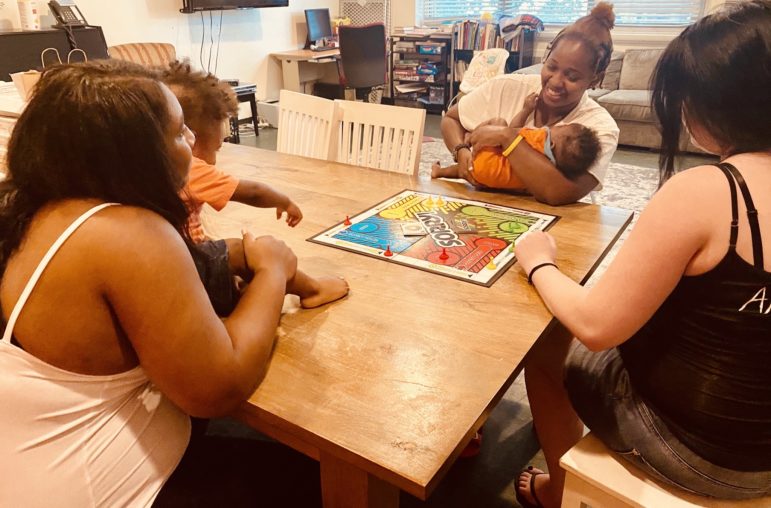 Residents of Malta House in Norwalk gather and play with their children.

“This data is an important conversation starter in recognizing how the pandemic is affecting youth and young adults experiencing homelessness,” said Stacey Violante Cote, director of operations, Homeless Youth Advocacy Project, Center for Children’s Advocacy, and chair, Youth & Young Adult Taskforce of the Reaching Home Campaign. “What this small survey tells us is that COVID has worsened their already fragile and unsafe situation.”

Overall, Connecticut saw a 4% decrease in homelessness from 2019 to the point-in-time count on Jan. 22, by the Connecticut Coalition to End Homelessness.  The numbers have declined 35% since 2007. The survey found that 20% of homeless individuals were under the age of 18, and 7% were between 18 and 24. According to CCEH, 2,009 people were staying in shelters at the start of March. Of that number, 134 were over the age of 62; 183 were families with 346 children; and 48 were unaccompanied youth.

Now, job losses due to COVID-19, domestic violence incidents among younger people, and virus transmission risks associated with inter-generational housing, is exacerbating the housing crisis for teens and youth.

Vasquez’s boyfriend lost his hourly job as a busboy at a restaurant. The lockdown led him to “be home more, fight more, hit more,” said Vasquez, who had dropped out of high school and was not employed. “I didn’t have nowhere to go,” she said. “So I called a domestic violence helpline in Norwalk.”

Mother and baby were removed immediately from their multi-family home.

“We are one of only two congregate living programs that continue to accept new moms and new clients in general during the pandemic,” said Carey Dougherty, Malta House’s executive director. “Most shelters are working toward decompression and the name of the game seems to be as few bodies as possible under one roof. Our waiting list is long.”

Vasquez’s situation is by no means unique. At the Meriden-Wallingford Chrysalis, a shelter for domestic violence victims, COVID-19 has resulted in a 10% growth in demand for services.

“The hard thing for a youth experiencing domestic violence and homelessness, compared to an adult, is the fact that they are typically undereducated – we’re lucky if we have a youth with a  high school diploma,” Linsey Walters, Chrysalis executive director, pointed out. “Being under-educated, working toward getting your GED (General Educational Development diploma) while also trying to find some type of quality employment, all of that takes time. If you add dependents on top of that – clients coming in with children under the age of 2 – it’s a very difficult puzzle to piece together (regarding) what needs to happen first.”

Bridget Puntiel became homeless after she lost her hourly job as a waitress and bartender due to COVID-19, and was waiting for her unemployment claims to be processed. Added to that, “me and my boyfriend weren’t getting along and he wanted me out of the house,” she explained.

Puntiel is among 160,000 food service employees in Connecticut grappling with layoffs or reduced work hours. Intensifying the struggle, similar to 78% of her colleagues in the industry, she lived paycheck-to-paycheck even before coronavirus slammed the restaurant sector.

This makes renting in the state a pipe dream. According to the National Low Income Coalition, a tenant in Connecticut must earn $52,837 per household per year to be able to rent a two-bedroom home at fair market price. Thirty-one percent of renter households were low-income well before the pandemic. Of that, 64% were in the extremely low-income category, and were at a greater risk of evictions. Now, the moratorium on rent is scheduled to end Aug. 25.

Inter-generational housing is another barrier for youngsters.

Samiah Nikole, for example, was living at her boyfriend’s mother’s home when she was forced to make a difficult choice.

“She had asthma so she didn’t want me to work at McDonald’s for two weeks to give her some time to clear up,” Nikole said. Unwilling to lose two weeks of pay, she decided to move out.

Nikole was fortunate compared to many others – she had an aunt who took her in.

In fact, the University of Connecticut has received a $76,000 grant from Princeton University to study COVID-19’s implications on domestic violence.

Cognizant of the increased need for shelter due to COVID-19, the New Haven nonprofit New Reach Inc. has just opened Portsea Place, housing for youth aged 18 to 24 who are experiencing homelessness or have aged out of foster care.

The U.S. Office of Disease Prevention and Health Promotion points to studies that correlate homelessness with negative health outcomes. A study of the newly homeless population in the New York City shelter system found that 6% had diabetes, 17% had hypertension, 17% had asthma, 35% had major depression, and 53% had a substance use disorder. Another study in Boston found that homeless people are at higher risk of premature death.