Vape manufacturers have long been accused of marketing to teens with flavors like mango and cotton candy. Now vaping opponents say vape manufacturers are exploiting the coronavirus with face mask and hand sanitizer giveaways and #COVID-19 discounts.

One maker of disposable vapes, Bidi Vapor, declared on Instagram: “A Bidi Stick a day keeps the pulmonologist away.”

The national Campaign for Tobacco-Free Kids says the tactics are hypocritical. Its president, Matthew L. Myers, said it’s imperative that young people quit vaping to avoid being susceptible to COVID-19. 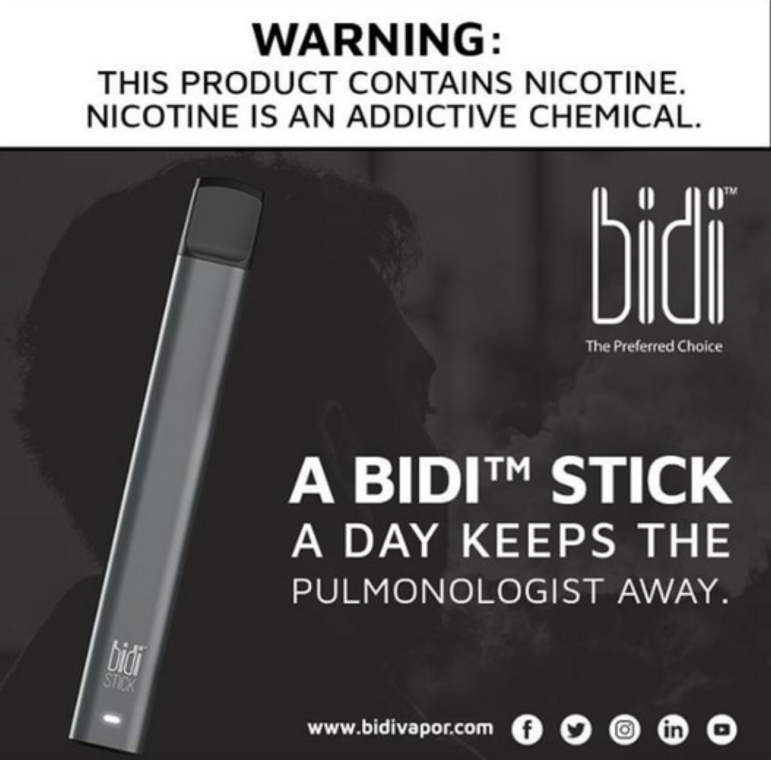 One of the many ads found on social media, during the pandemic.

“Never before in our history has it been more important for young people to have healthy lungs,’’ Myers said.

“It is so irresponsible,’’ said DeLauro, a member of the bipartisan Congressional Caucus to End The Youth Vaping Epidemic. “It just reeks of greed.”

But Andrew O’Bright, president of the Connecticut chapter of the Smoke-Free Alternatives Trade Association, said the claim that vape shops are exploiting the pandemic is laughable.

“There’s not some evil ploy here,’’ O’Bright said. “Our industry is trying to say, ‘We’re here to help you.”

Adam Webster, who owns The Steam Co. vape shops in Manchester and Orange and an e-liquid manufacturer in Denver, said that when the pandemic hit, his plant quickly converted a machine from making e-liquid to hand sanitizer.

He said his company lost $7,000 by giving away thousands of free bottles to customers, first responders and hospitals. “You know what’s better than having $7,000?” he asked. “Having a healthy customer base who maybe can’t find hand sanitizer.”

The Threat Before COVID-19

The advertising gimmicks are the latest controversy involving the vaping industry, which U.S. Sen. Richard Blumenthal, D-Connecticut, said has hooked a new generation of young people on nicotine. He has proposed a national ban on flavored vapes while DeLauro favors a ban on all vaping products. 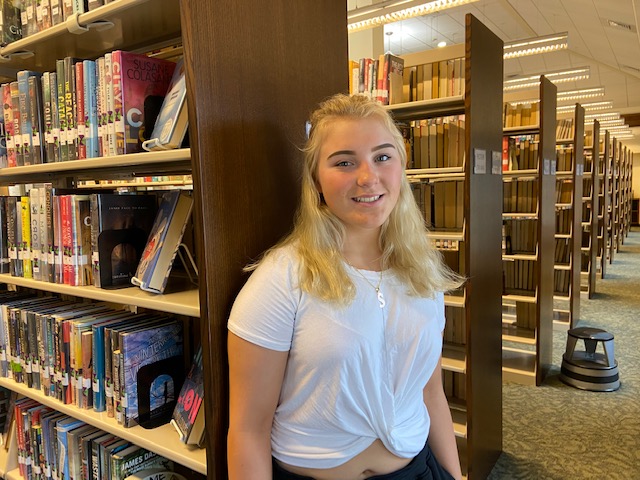 Sabrina Sault, 18, of Vernon, is a Rockville High School senior and cheerleader who says she has nearly stopped vaping after about three years. Pictured at the Rockville Public Library, she said that if she could, she would tell herself to “stop before it got to be too much.”

While no data has definitively linked vaping to COVID-19, Blumenthal points to a 2019 British study that found that e-cigarettes may cause acute injury to the lungs and weaken the immune system. He said vaping “is contributing to the danger and deadliness of the coronavirus.”

Before COVID-19 hit, vaping was linked to a mysterious illness that killed one person in Connecticut and 64 nationwide. The Centers for Disease Control and Prevention (CDC) called it EVALI, which stands for e-cigarette or vaping product use associated lung injury.

As of February, more than 2,800 people have been hospitalized with EVALI, including 51 in Connecticut, the CDC reports. Twenty-three cases involved patients 24 or younger, the state Department of Public Health reports.  Overall, cases of EVALI had been declining nationally since last fall, which the CDC attributes to increased awareness about the risks of vaping and THC and the removal of Vitamin E acetate from some products.

A 19-year-old man came to Stamford Hospital in November, complaining of shortness of breath, a dry cough and abdominal pain. Dr. Paul Sachs, Stamford Health’s director of pulmonary medicine, said it was a severe case of EVALI.

“The fluid in the lungs was kind of drowning him,” Sachs said. “It was a race to treat him with steroids as quickly as possible. If he had waited a day to come in, he might not have made it.”

The teen, who recovered, told Sachs he had vaped black market “juice” laced with THC, the ingredient in marijuana that produces a high. The CDC has linked EVALI to the black market vapes and the acetate, a thickener used in some vaping products.

Dr. Melanie Sue Collins, a pediatric pulmonologist at Connecticut Children’s Medical Center in Hartford, said 80% of the 10 EVALI patients her hospital treated had vaped THC. They all recovered.

Neither Collins nor Sachs has seen EVALI cases since late February, and Sachs said that none of his COVID-19 patients have vaped.

For years, doctors, educators and politicians have been speaking out about the skyrocketing rates of vaping among teens. 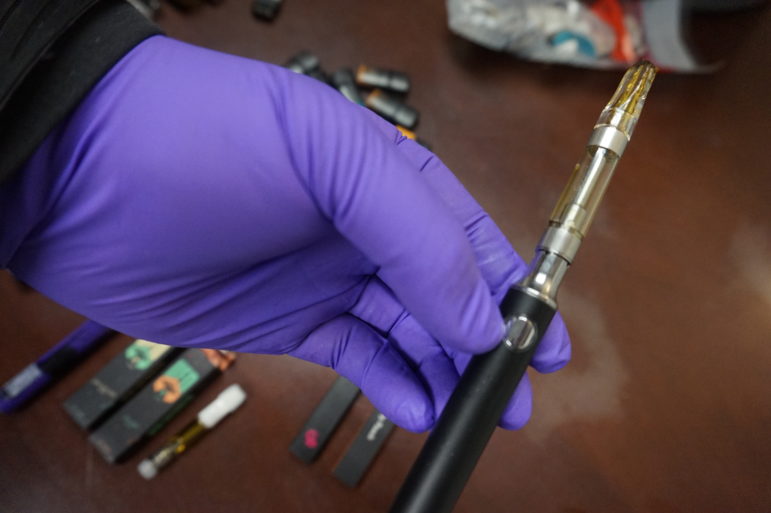 The Vernon ROCKS Coalition, an anti-drug and alcohol student group, reported this school year that 36% of Rockville High School students said they vaped—a higher percentage than those who reported using alcohol or marijuana.

“The use of vaping is seen as cool, but it’s really ugly,” Emily Guerrero, one of the group’s leaders, said.

Senior Sabrina Sault, 18, a Rockville cheerleader, said she started vaping when she was 16. By junior year, school was stressful, and the popular Juul pods calmed her. She “hit” them in school bathrooms and in class.

“Every week, every day, every hour,’’ she said. “Pretty much anytime I could.”

The cost—$10 to $30 a week—and the stomach problems and mood swings they caused made her decide to quit this year.

“I can be proud of myself that I don’t do it every day, but I want to fully quit,” she said.

Vape manufacturers say they don’t market to youth, but Sachs doesn’t buy it. “A 40-year-old smoker trying to quit is not going to seek out Cap’N Crunch-flavored vapes,” he said.

In December, the U.S. Food and Drug Administration raised the legal age to buy tobacco cigarettes, e-cigarettes and vaping products from 18 to 21 nationally. In February, it banned some types of flavored vape cartridges. It recently warned 14 Connecticut stores, mostly gas stations and convenience stores, to stop selling the prohibited items. 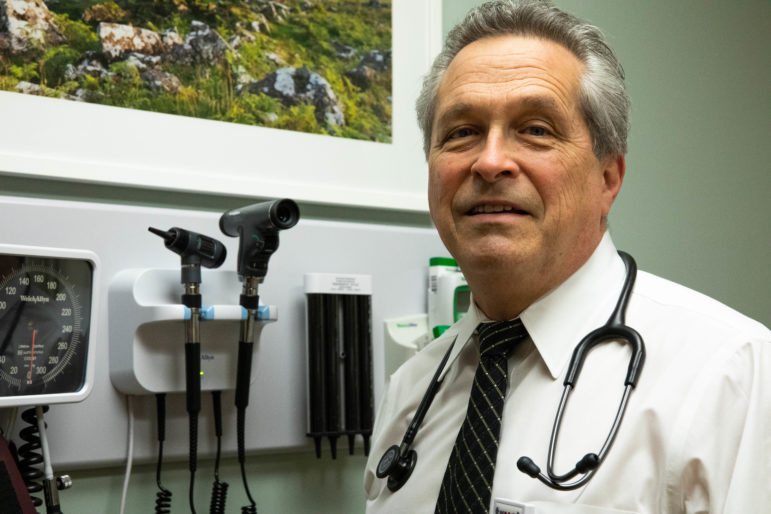 New York, Rhode Island and Massachusetts have recently passed more extensive bans. Connecticut was considering such a ban before the state legislature suspended its activities on March 12 in response to the pandemic and on April 21 announced that it would not reconvene in advance of the constitutional adjournment on May 6.

While vape shops were not initially listed as “essential businesses” during the pandemic in Connecticut, the dozen shops in O’Bright’s association were granted state exemptions to open. About two years ago, Connecticut had 200 vape shops but now has fewer than 70. O’Bright blames ill-informed politicians and the media for harming an industry that is saving lives by helping people switch from cigarettes.

“All known science shows that vaping products are 95% safer than cigarettes, so we need to get the stigma away from it,’’ O’Bright, a smoker-turned-vaper, said.

“We have always been, from day one, against the teen use of vapes,’’ O’Bright said.