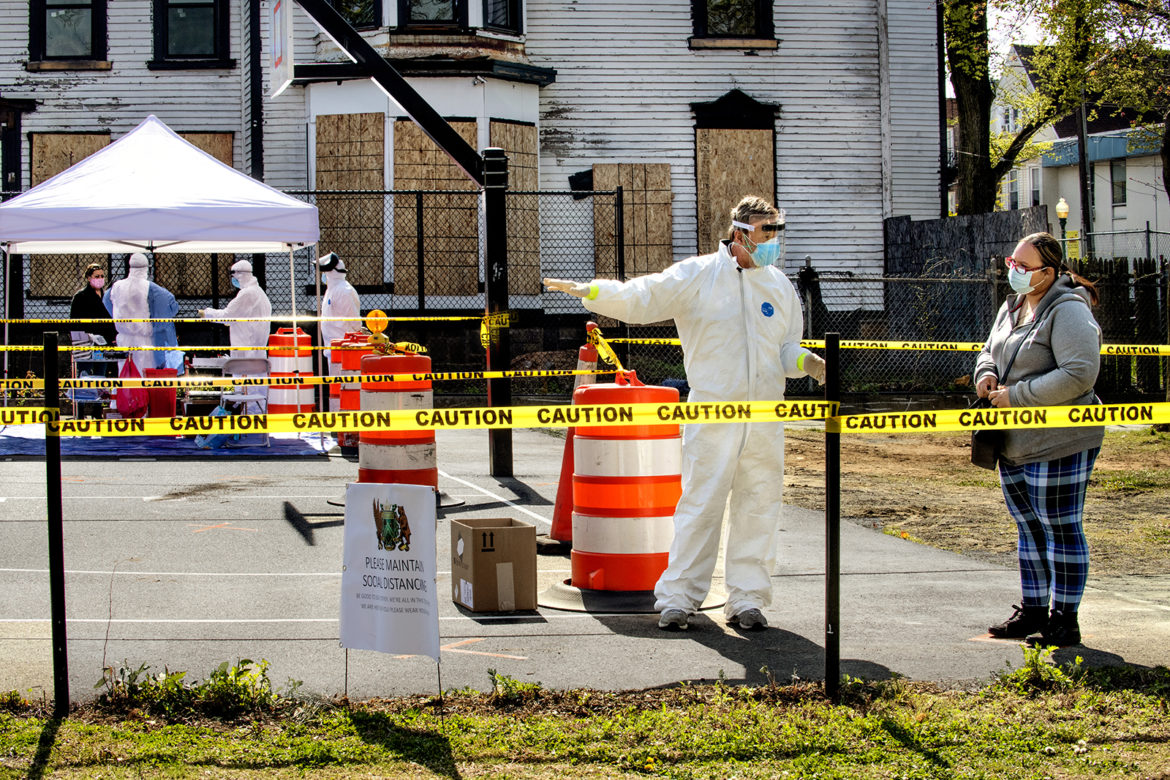 A woman waits to enter the testing walk-up site at Chapel and Day streets, run by Dr. Steven Murphy of Greenwich.

Leslie Radcliffe looks ahead to the planned reopening of Connecticut’s economy beginning on May 20 with a mix of hope and anxiety. Hope, because people in her working-class Hill neighborhood in New Haven will be able to return to work, but anxiety because she’s worried that the “reopening” won’t go smoothly.

In particular, she is concerned about testing for coronavirus. Will there be enough testing so the disease won’t catch fire again and threaten the lives and livelihoods in her predominantly black and Latinx neighborhood?

Radcliffe, an administrative assistant at Yale University, has been working from home, but last week she began driving her brother to his job at Costco. He lives with her and has no car. She has medical conditions that make her particularly vulnerable to the disease. There is no testing facility in her neighborhood, so she plans on driving him to one elsewhere in the city at least once a week to make sure he’s clear—and she’s safe.

This is Connecticut’s dilemma as it contemplates lifting many of the strictures on businesses that have, so far, prevented an uncontrollable spread of the disease that could overwhelm the ability of the health care system to respond.

The May 5 report from Gov. Ned Lamont’s office showed that 108,643 tests had been performed in the state so far, and there have been 30,621 confirmed cases and 2,633 deaths. Fairfield County had been hit hardest, with 12,360 cases, followed by New Haven and Hartford counties. 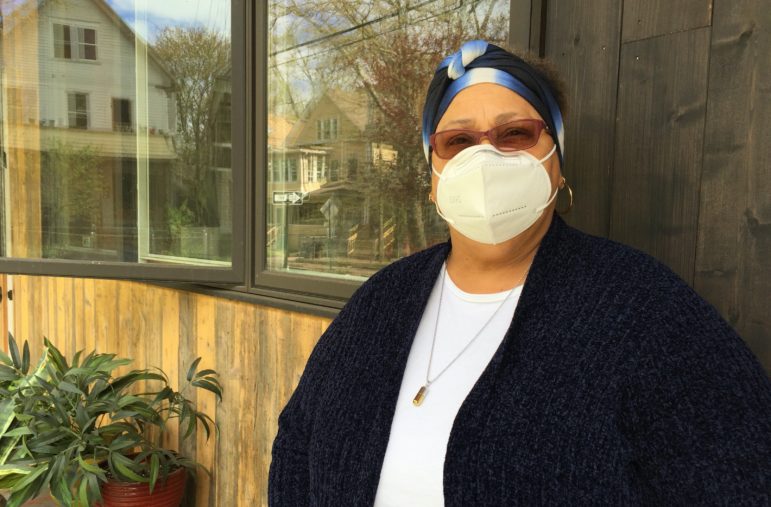 Leslie Radcliffe, an administrative assistant at Yale University, has been working at home. She drives her brother who lives with her to work and also to be tested weekly for COVID-19. She’s worried about the state reopening without enough testing.

Building up testing capacity has been a challenge. In March and April, government and health care leaders scrambled to offer testing across the state. Their quick actions helped prevent hospital intensive care units from being overwhelmed, and they are now expanding services further. For instance, Hartford HealthCare last week deployed mobile testing in Hartford.

However, officials were slow to offer testing in dense urban neighborhoods and convalescent homes, where some of the state’s most susceptible and vulnerable people live. Analysis of data shows that black and Hispanic residents experienced hospitalizations and deaths due to COVID-19 out of proportion with their representation in the state’s population of 3.5 million.

Now, with a target for reopening just a few weeks away, government and health care leaders are scrambling to put an adequate and sustainable testing infrastructure in place wherever it is needed. During his daily COVID-19 briefing on April 30, Lamont said: “Testing is important for businesses as we reopen. Testing gives the consumer confidence that they’re going to be safe at that open-air restaurant. Our testing is on track. We’re expanding that. It’s a real priority.”

At the same briefing, Dr. Albert Ko, who is professor of epidemiology and medicine and department chair at the Yale School of Public Health and the co-chair of the governor’s Reopen Connecticut Advisory Board, estimated that the state would need to be able to perform about 42,000 tests per week (6,000 per day) to reopen safely. On that day, 2,315 tests were reported statewide.

Just two days earlier, however, Dr. Thomas Balcezak, the chief clinical officer for Yale New Haven Health, said the health system had at that point tested just 30,000 people at its facilities ranging from Greenwich to New London since the beginning of the outbreak. “We have to as a state test 30,000 individuals a day,” he said.

Interviewed on WNPR’s Where We Live program on May 4, Stamford Mayor David Martin said, “We are a long way away from where we need to be with testing.” Josh Geballe, the state’s chief operating officer, said later that day that a shortage of swabs had slowed testing, but the issue is being addressed. 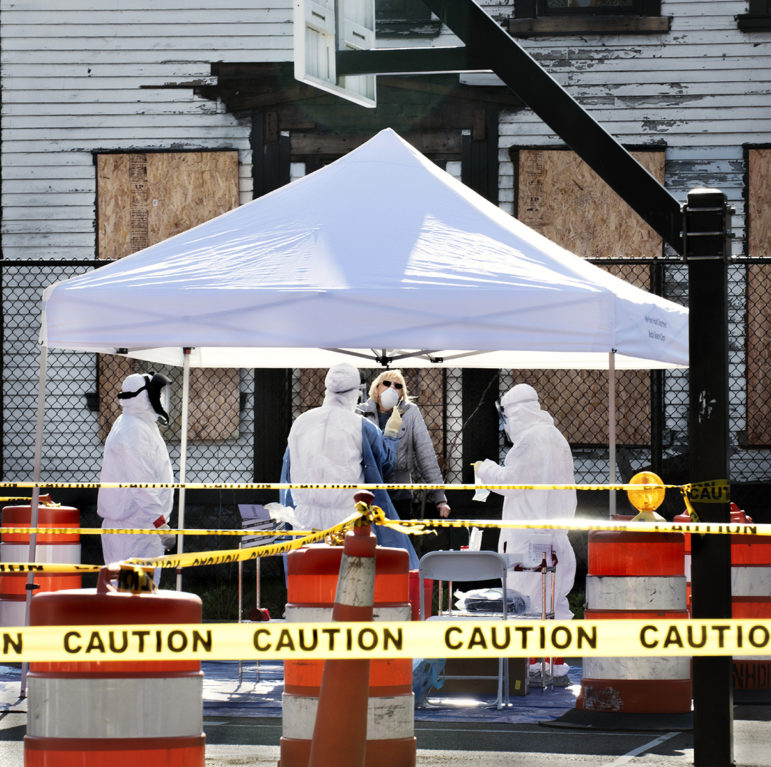 Workers prepare to test a woman at the walk-up site on Chapel and Day streets, New Haven.

Tracing and Isolation Are Also Critical

In Connecticut and across the country, government and health care leaders are facing the same dilemma: They want to reopen their economies, yet not enough is known about the spread of the disease to do so with full confidence that it can be done safely. That’s because many of the people who are infected do not know it, there are no vaccines or treatments, and it is unclear if people who recover gain immunity. In addition, the most common tests for the disease take two to three days to deliver results, and there are many false positives and false negatives. The situation is nebulous—like a surgeon operating on a patient by candlelight.

Several research organizations have published recommendations setting out criteria for reopening. One of the reports, Roadmap to Pandemic Resilience, issued by the Edmond J. Safra Center for Ethics at Harvard University, calls for massive-scale testing, tracing and supported isolation (TTSI). “We recommend a level of TTSI ambitious enough to replace collective quarantine as a tool of disease control,” the report says.

The report recommends 5 million tests per day nationally by early June, increasing over time to 20 million per day. Other organizations recommend extensive testing, as well. Based on the Harvard group’s formula, Connecticut, with roughly 1 percent of the U.S. population, should be performing 50,000 tests per day by the time it reopens—considerably more than the 6,000-per-day level the state is aiming to achieve.

As of May 4, Connecticut ranked 13th among the states for its level of testing so far. Rhode Island, New York and Massachusetts rank first through third, according to data collected by Johns Hopkins University.

Dr. Sten H. Vermund, the dean of Yale School of Public Health, agrees that massive testing and tracing are needed. He advocates the use of the kind of test that requires only about 15 minutes to deliver results. As of now, a minority of Connecticut’s tests are this type. Most of those are administered at a single facility near Interstate 95 in New Haven. “These tests will make it much safer to open the state,” Vermund wrote in an email.

Contact tracing will be critical, too. The Emerging Infections Program at Yale School of Public Health has pitched in with New Haven’s health department and the state Department of Public Health to activate a tracing program in the New Haven area. It’s an all-volunteer effort, mostly involving nursing and public health students. About 400 people call the known contacts of people who have been diagnosed with COVID-19 and advise them to self-quarantine. Elsewhere around the state, municipal health departments are coordinating volunteers who are tracing contacts.

Quarantine is especially challenging for economically disadvantaged people who often live in close quarters. Dr. R. Douglas Bruce, chief of medicine at Cornell Scott-Hill Health Center in New Haven, spoke to a patient recently who lives in a house with six other people. All seven have COVID-19. “COVID has shown a spotlight on health equity issues in our community. Not everyone has access to the help they need,” he said. 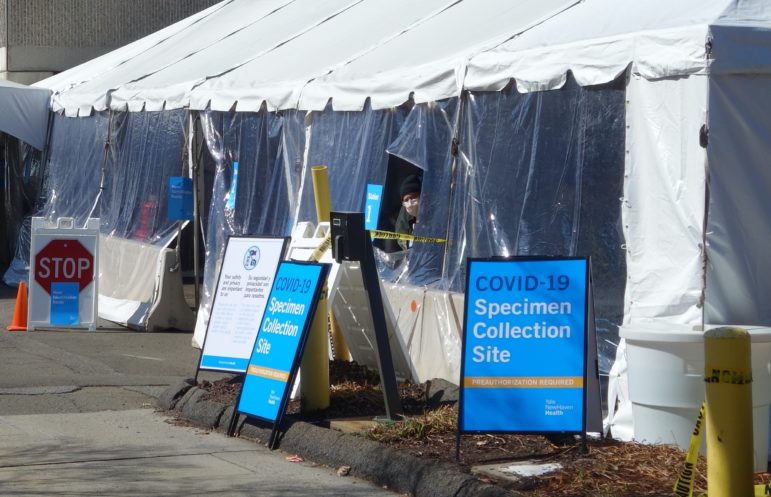 In New Haven, first responders who have been exposed to the virus are quarantined in dormitories at the University of New Haven, but this level of protection isn’t available to most people. The city has approached hotels and motels about accepting people in quarantine, but, so far, none have agreed to do so.

New Haven, with its fulsome health care and public health resources, provides a case study in activating testing, tracing and isolation. Yale New Haven Health was the first to open a testing facility on Long Wharf next to I-95. Then it became clear that the disease was especially active in densely populated neighborhoods occupied predominantly by people of color.

Cornell Scott and the Fair Haven Community Health Care opened testing centers on April 22 in the Dixwell and Fair Haven neighborhoods so people who don’t have cars could walk to get tests. The city opened another walk-in center in the Dwight neighborhood on May 1. Most recently, on Tuesday, clinicians began testing homeless people in a tent erected near their encampments in the city’s East Rock Park and under Interstate 91.

New Haven Mayor Justin Elicker said the city and its health care partners reacted to the crisis at first with an all-hands-on-deck approach. While things have begun to settle down, there are still a lot of unknowns. “We know about the hot spots because people have been tested there, but because our testing is so limited, there are probably other hot spots that we haven’t spotted yet,” he said.

Of particular concern across the state are convalescent homes and housing facilities for the elderly. In New Haven, clinicians from Fair Haven Health Community Health Care tested all 2,500 residents at the sprawling Bella Vista senior living complex. Hartford HealthCare is in the process of testing residents in facilities that it operates. However, many senior housing facilities and nursing homes haven’t been able to test comprehensively.

Elicker eyes the planned reopening of the state on May 20 with trepidation. He called on the Lamont administration to provide detailed guidance on how to open businesses safely. He worries that so many of the supplies and testing resources that are needed are not yet available. “Right now, the testing is only for people with symptoms,” he said. “We need to start testing people who are asymptomatic as well. Ideally, you’ll want to test the entire population on a regular basis. That’s unlikely, but we have to prioritize and get going.”