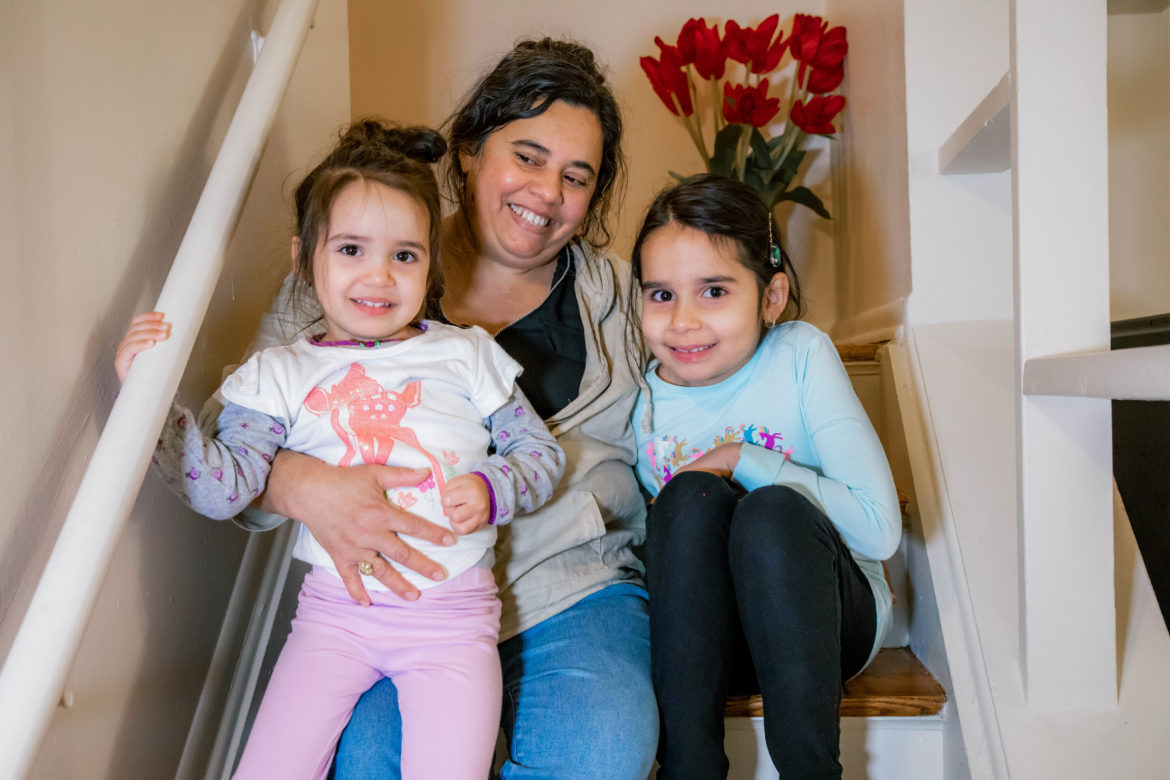 For months Tania Rodriguez, 48, and her daughters Charlotte and Caroline were living in shelters. She now has a new home thanks to New Reach, a nonprofit that helps families move into affordable housing.

They may be nonverbal, or act out. They’re often sick, but may not have a pediatrician. They may not even know how to brush their teeth.

“The impact on these young children is gigantic,” said Darcy Lowell, chief executive of Child First. Based in Trumbull, the agency provides counseling and practical help to families in their homes, and in homeless and domestic violence shelters.

About 1,660 Connecticut families with children under age 6 sought help in obtaining stable housing in 2018, according to state figures. There aren’t state statistics on the total number of young children who are homeless or in unstable housing situations. Many people remain under the radar and don’t seek help for a variety of reasons, such as hiding from domestic violence; fear that the state will take their children from them; or fear that a family they are staying with may be deported, advocates say. Caroline and her younger sister, Charlotte, in their new home.

Now, for the first time, the state, children’s advocates and housing organizations are participating in an initiative that focuses specifically on pregnant women and children under 6 who are homeless or housing unstable. The three-year, $1 million collaborative intends to prevent homelessness and collect data, with the hope of avoiding lifelong problems and costly remedies.

“We will now have evidence about whether diverting children from shelters will have both short- and long-term outcomes, which is fantastic,” said Richard Cho, executive director of the Connecticut Coalition to End Homelessness (CCEH).

Tania Rodriguez lived in homeless shelters with her children from June to December. “In the end, who suffers the most? It’s the kids,” she said.

Her 3-year-old daughter, Charlotte, got so thin in the shelters that her pants wouldn’t stay up on her waist, Rodriguez said. Charlotte was continuously angry, distracted, crying and not interested in eating. The family, which also includes Caroline, 7, moved to a West Haven apartment in December. The children’s appetites have improved, and they are calm, although Caroline still gets chest pains believed to be stress-related, Rodriguez said.

For the Peaslee family of Vernon, housing insecurity has also taken a toll. Colton, 6, has angry outbursts, is hyperactive, constantly seeks attention, has difficulty following directions and often looks like he isn’t listening, said his mother, Rachel Peaslee.

Colton lived with his mother and sister in a homeless shelter for three months. Before that, the children split a year living with an aunt, then a day-care worker while their mother was in drug rehabilitation. “Being in an unstable situation, it’s a horrible thing,” Rachel Peaslee said.

Families in unstable housing can seek help from the state collaborative by calling 211, the United Way hotline. Assistance includes money for one-time expenses, such as car repairs, unpaid sick days or a security deposit, so they won’t be short on rent money. Over the next two years, housing programs will receive financial incentives for keeping families with a child younger than 6 out of homeless shelters and for offering help to children, such as developmental screenings.

The project is a collaboration of the state Office of Early Childhood, the Connecticut Department of Housing, the University of Connecticut School of Social Work and CCEH.

Kathryn Parr, assistant research professor at the University of Connecticut School of Social Work, is collecting data for the project. She anticipates periodic interviews with about 400 families over 12 months. Tania Rodriguez with her daughters Charlotte and Caroline.

In 2016, Parr estimated that costs of services for homelessness can reach $122,450 per family, compared to about $1,000 per family for homeless diversion programs. A 2015 state study of homeless children estimated a broad range between 3,000 and 9,000 homeless families with young children in Connecticut. More specific numbers haven’t been determined.

Parr said little research has been done on the physical health of very young homeless children, but that studies of those between the ages of 5 and 10 found more asthma, ear infections, lead toxicity cases and emergency room visits.

A major concern is brain development, said Elena Trueworthy, director of the Connecticut Head Start Collaboration Office. She said homeless children are given priority for placement in Head Start preschool programs, where they bond with caregivers, eat nutritional food, make friends, and nap comfortably, all of which enhance brain development. While children are attending Head Start, parents get time to deal with their housing issues. In 2018, a total of 487 homeless pregnant women and children younger than 6 attended Head Start programs, Trueworthy said. Charlotte Rodriguez is now in a Head Start preschool.

Joan Neveski, clinical manager of Youth and Outpatient Clinical Services at Charlotte Hungerford Hospital in Torrington, said more services are needed. There aren’t “a lot of higher levels of care for these children,” she said, adding “you have to create a village around the family.”

Rodriguez, the West Haven mother, is being helped by such a village. She said she was a physician in Cuba before she moved to the U.S. 11 years ago seeking political asylum. But, here, she cleaned houses and worked in retail and fast food jobs. She now attends school to become a certified nursing assistant. Under the state Rapid Re-housing program, she was connected with New Reach, a nonprofit that focuses on housing stability. New Reach helped her with her lease and apartment inspection, administers state subsidies that pay a portion of her rent, and helps her obtain other services such as state-funded van transportation to the children’s schools so Rodriguez can get to her classes.

Out of the shelters, the children “have changed a lot,” Rodriguez said. “Their faces, their eyes, their look. They are happy now.”