On a snowy Saturday morning in January, Selvin, 13, and his mother were in the basement of the First and Summerfield United Methodist Church in New Haven, to support a friend in sanctuary. As they sat there, the boy tried to push away thoughts of how it would be when ICE came to take away his own mother, who is also under a deportation order.

“I’m going to be alone with my little brother and my dad,” Selvin said. “Sometimes I feel I don’t want to talk to anybody. I just go to my room, lock the door, and I feel depressed.”

Selvin – whose family asked that his last name be withheld – is among thousands of immigrant children in Connecticut and nationally feeling the effects of prolonged stress, which can become so toxic it can damage the developing brain. Toxic stress can set a child up for depression, as well as alcoholism, heart disease and diabetes in adulthood, Harvard University research shows.

Selvin worries about separation from his mom, if she is deported.

Connecticut mental health organizations say their phones have been ringing off the hook since President Donald Trump issued an executive order on immigration, authorizing Immigration and Customs Enforcement to deport an estimated 11 million people living in the U.S. illegally.

The offices of both U.S. senators, Chris Murphy and Richard Blumenthal, are inundated with calls from panicked undocumented parents, their spokespeople say.

Carolina Bortolleto of Connecticut Students for a Dream estimates that there are about 10,000 “dreamers” statewide – undocumented immigrants, who arrived in the U.S. as children. Also, about 22,000 U.S. citizen-children of undocumented parents live in Connecticut. If their parents were deported and the children entered foster care, the cost to the state has been estimated at $630 million.

But experts say that’s a drop in the bucket compared to long-term health care costs.

“If these parents leave, those kids are going to need mental health services, potentially special education later on, and remedial health services; it will cost the state well over $1 billion in just health care,” said Dr. Darcy Lowell, founder and CEO at Trumbull-headquartered Child First. The organization, which has 15 affiliate sites in Connecticut, specializes in treatment of children who suffer from toxic stress.

When Child First fielded a call late last year from an undocumented immigrant mother of a 3-year-old, mental health officers made a house visit. They found that the child was behaving aggressively toward her classmates and had intense bouts of crying.

Clinicians found that the toddler was experiencing symptoms of toxic stress. The child had witnessed domestic violence and was struggling to cope with the sudden absence of her father from their lives. Now, she was facing a new stressor: her mother’s anxiety over deportation.

Experts say that treating only the child will not mitigate toxic stress. It’s important to reduce the mother’s stress as much as possible, and to try to create a more stable and secure home environment.

So, Child First social workers accompanied the mother to an immigration attorney, arranged legal guardianship for her children and made a safety plan to protect them from her abusive former partner after she is eventually deported. The team then engaged the mother in counseling, and clinicians met with the teachers and the mother together.

Child First’s approach is not the standard form of treatment, but research indicates that perhaps it should be. Early intervention can help, but only if parents learn to manage their own anxiety first. “We do that by decreasing the stressors in the life of the family,” said Lowell.

Still, social workers can only do so much given the new immigration environment.

“The United States should have immigration policies that support keeping families together rather than tearing them apart,” said U.S. Rep. Rosa DeLauro. “Yet, it has been reported that ICE officials are waiting in school parking lots, early childhood learning centers, and offices where families access social safety net services in order to question or even detain people who may be undocumented.” 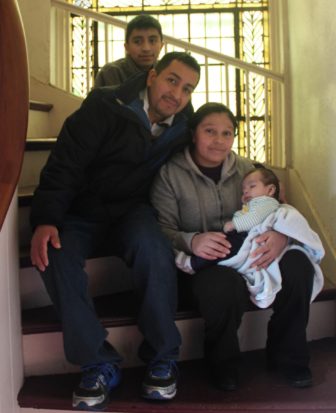 Paulina Lopez, 32, with her family inside the  First and Summerfield United Methodist Church, New Haven.

Dr. Catherine Wiley, medical director of primary care services at Connecticut Children’s Medical Center (CCMC) in Hartford, said that since the presidential election, pediatricians at the practices that she oversees have reported an increase in the number of teenagers coming in with insomnia, crying and chest pain. “We sent one child who was having chest pain to the emergency room, and it turned out that it was tremendous anxiety over the possible deportation of a parent,” she said.

“We’re seeing a lot of anxiety and fear; every provider has said that they are experiencing this daily.”

But not all children are receiving the help they need.

“Pediatricians are reporting that they can’t screen and refer children who are experiencing toxic stress because they can’t get them into their practices right now,” said Kimberly Martini-Carvell, executive director at Help Me Grow National Center at CCMC. “Parents are not bringing their children due to fear of being engaged within the system. You can only imagine how that fear is permeating to the child.”

Selvin said he doesn’t like to talk about his anxiety. The family had gathered in the New Haven church in a show of support for Nelson Pinos Gonzalez, a 43-year-old Ecuadorian national who took refuge there in November in defiance of deportation orders. Gonzalez was cooking a lunch of pupusas to raise money for his wife and their three children.

Selvin’s mom, Paulina Lopez, 32, had fled conflict and violence in Guatemala, riding “The Beast,” a series of freight trains across Mexico, to enter the U.S. four years ago. “It took a month to get here,” she said through a translator. “I had Selvin and zero money with me.” Lopez found work in a plant shop and married a landscaper from Ecuador.

“My hope was to build a better life in America.”

Sujata Srinivasan was interviewed about her story on toxic stress and immigrant children by WNPR’s Ray Hardman. You can listen to the interview here.