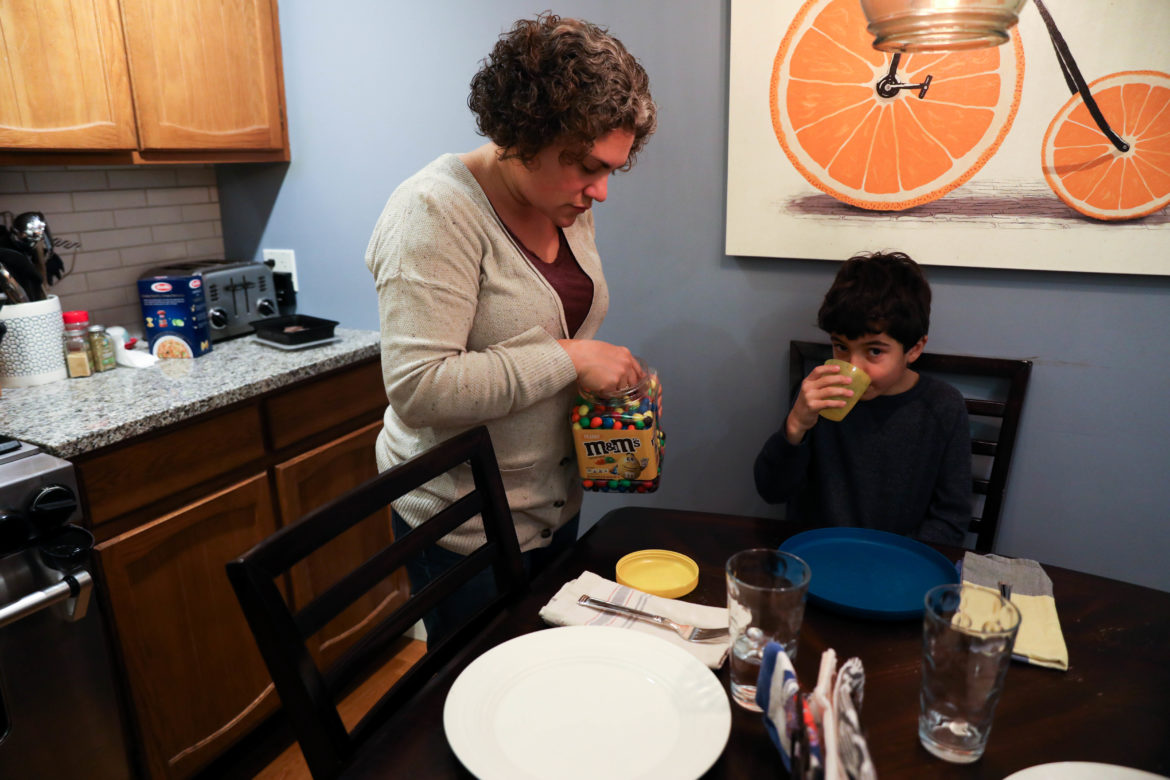 For Oliver Racco, it’s a part of his daily routine: eating a few peanut M&Ms.

It may seem like a treat to some kids, but for Oliver – and a relatively small but growing number of children – it’s an important way he and his family manage his peanut allergy.

Racco, 7, who lives in West Hartford, eats the M&Ms as a daily “maintenance dose,” having recently completed an allergy desensitization process at the New England Food Allergy Treatment Center in West Hartford. The process is intended to protect people with severe allergies in the case of accidental ingestion.

“Since we’ve gone through the treatment, it has taken away a lot of that worry,” said Racco’s mother, Jessica. She takes some comfort in knowing her son will be all right if he accidentally eats or is exposed to peanuts, she said. He also has a tree nut allergy.

Desensitization is a relatively new treatment option, according to Dr. Jeffrey Factor, medical director of the food allergy treatment center, which began offering the program about nine years ago.

While it’s gaining popularity, most people with food allergies aren’t undergoing the process — due either to lack of access or of awareness — and most manage their allergies by avoiding allergens, he said.

Food allergies are increasingly common among children. Nationwide, an estimated 8% of children— one in every 13 kids, or about two students per classroom— have a food allergy, according to the U.S. Centers for Disease Control and Prevention (CDC), and the occurrence of childhood food allergies jumped 50% between 1997 and 2011. 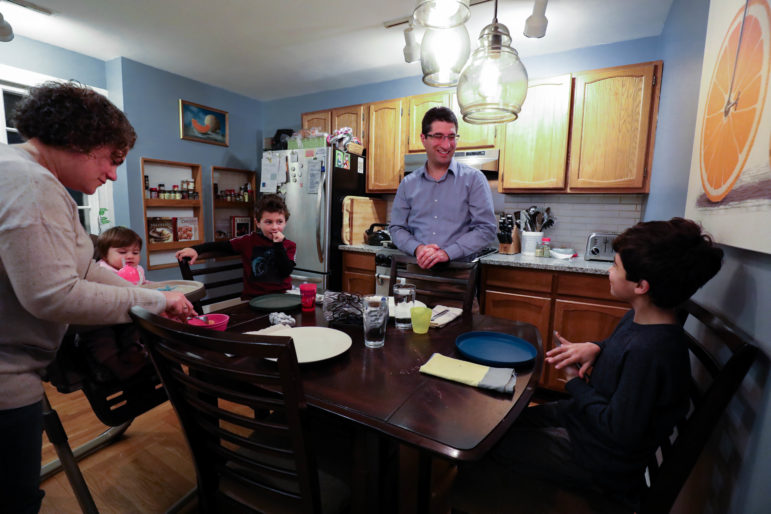 “There are definitely much more allergies,” said Dr. Gary Soffer, assistant professor of clinical pediatrics in Yale New Haven Children’s Hospital’s Department of Pediatric Pulmonology, Allergy, Immunology and Sleep Medicine. “There’s a lot of research and there are a lot of theories [as to why]. There’s definitely not a consensus.”

A contributing factor, Soffer said, likely is the growing use of antibacterial products like hand sanitizers, and a reluctance to introduce allergens to kids’ diets.

“We’re trying to keep our kids cleaner and safer … but by doing that, we’re not really strengthening their immune systems like we used to,” he said. “A lot of times, what that ends up doing is causing allergies.”

That theory is gaining traction in recent research, said Mary Peterson, a clinical assistant professor of nursing and director of the accelerated nursing program at Quinnipiac University. She’s also a pediatric nurse practitioner and the mother of an adult son with severe allergies to dairy and tree nuts.

“We’re too clean. We’re not exposing children to a variety of things in the environment, so when they come in contact with certain things in foods, their body is seeing it as bad,” she said.

The most common food allergens among children nationwide are milk, eggs, fish, crustacean shellfish, wheat, soy, peanuts and tree nuts, according to the CDC. In people with food allergies, their immune systems mistakenly respond to food as if it were harmful. The most severe reaction is anaphylaxis, which can be fatal in extreme cases. 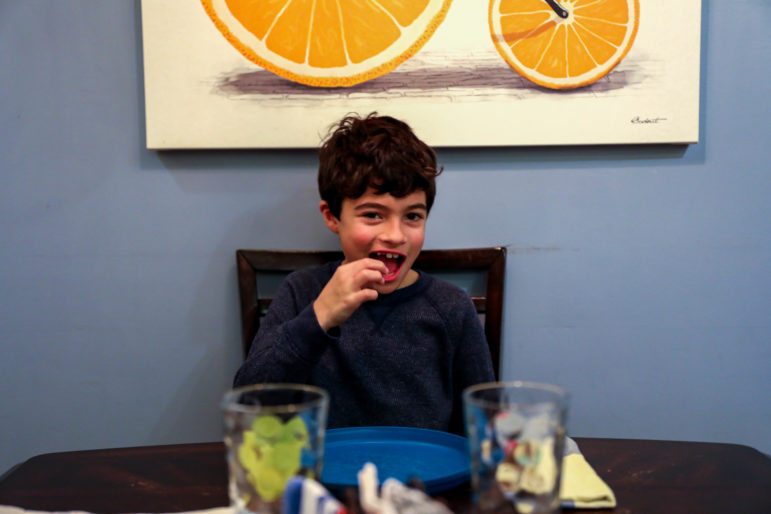 Part of a daily routine, Oliver eats two peanut M&Ms and a chocolate bar with walnuts after munching on a bowl of Goldfish crackers.

“When a child has been diagnosed with a food allergy, you can’t predict what a reaction is going to be,” Peterson said. Anaphylaxis “is not a common thing that happens, but it does.”

“The risk of anaphylaxis is very low, but it’s there. I reassure parents that as long as they’re safe about it and have a good action plan, they really do lower the risk,” he said.

Kristen Yahwak of Middletown says the impact was significant and immediate once her daughter Lucy, 8, could finally eat peanuts after years of being allergic.

“For her, it’s really life-changing at this point, and for us too,” Yahwak said. “For years, I’d been holding my breath, and it was like I was finally able to breathe. It was very exciting.”

Lucy, who was diagnosed with a peanut allergy at age 2, is no longer considered allergic after undergoing a desensitization process at the West Hartford center.

It’s been a more complicated journey for Yahwak’s son Ben, who is 5 and has severe peanut and tree nut allergies. He has completed the desensitization process, but doctors are cautious and don’t want him to test whether it worked quite yet.

Protecting against accidental ingestion is the main goal of desensitization processes like the one at the center, according to Factor, who also is a professor of pediatrics at UConn School of Medicine and division head of allergy and immunology at Connecticut Children’s Medical Center.

“The treatment is not really a cure,” he said, adding a growing number of people are undergoing the process. “It’s really a desensitization to provide [people with allergies] with protection against accidental ingestion. More and more people are becoming aware that this is a viable treatment option.”

Typically, at patients’ first visit to the center, they are given increasing doses of an allergen to determine the maximum amount they can tolerate. They then return every two weeks for an up-dosing visit, during which they receive a single dose of the allergen until they reach a “maintenance dose,” he said. 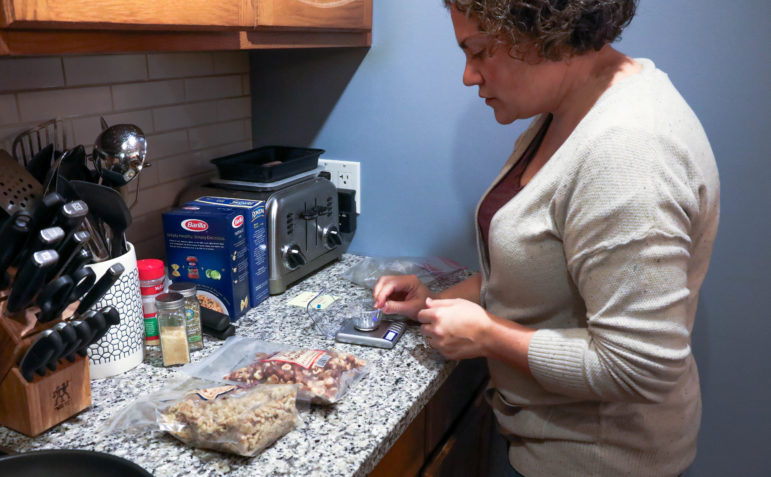 Jessica Racco places chunks of walnuts onto a food scale. Her son, Oliver, eats about four grams of walnuts, covered in chocolate, to help build his tolerance to nut allergies.

Once patients reach a maintenance dose level, they consume a certain amount of the allergen — say, several peanuts or peanut M&Ms — regularly.

People with peanut allergies tend to benefit the most from the process, he said, with roughly 85% to 90% seeing positive results — compared with roughly 70% to 75% of those with milk allergies, for instance. The process takes 10 to 12 months.

For Racco, the process offered peace of mind: “If [Oliver] is exposed to it somehow, whether it’s in something he’s eating, or on a table [at school] from a student before him, he will not have a reaction because of this treatment. He’s protected. It’s been well worth it.”

Sending young children to school can be particularly stressful for parents. The state Department of Education has guidelines for how school districts should manage food allergies. The guidelines, established under state law in 2006, say each local and regional board of education must implement a plan based on the guidelines, and make the plan available on a board or school website.

But the guidelines deal largely with how to store and administer medication like Epi-Pens, giving schools leeway in how they handle allergies. Some have banned allergens from the classroom or school altogether, some assign students with severe allergies to designated tables in cafeterias, others have children with allergies eat in classrooms rather than cafeterias, and some schools with older students allow students with and without allergies to eat together.

School staff and bus drivers must be trained to recognize the signs of anaphylaxis and administer an Epi-Pen, under state law.

Even as awareness of food allergies and treatment options increase, the dangers are constantly at the forefront of parents’ minds, said Peterson.

“When you have a child that has a life-threatening allergy to food, it is extremely stressful,” she said. “It has a big impact on quality of life for these families.”