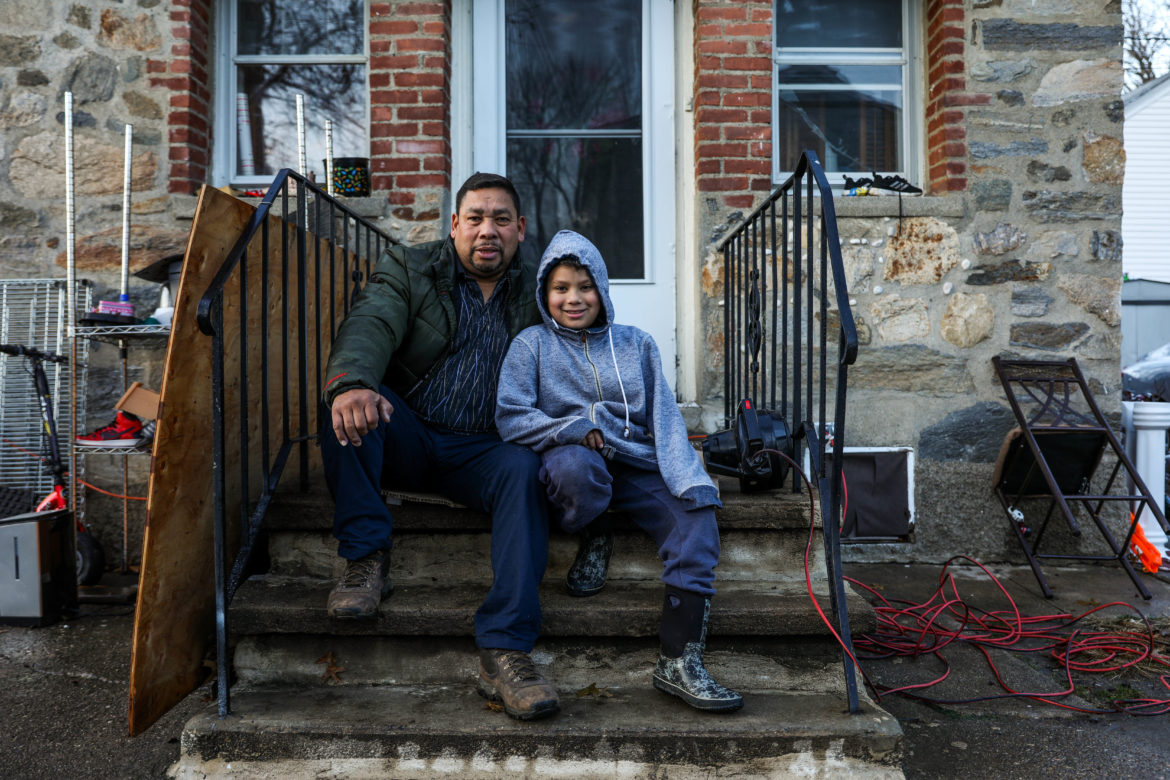 Jesus Manuel Gomez and his son, Jeremías, in front of their Bridgeport home. While working as a dishwasher, Gomez said his work schedule was unpredictable and made it difficult to take care of his son.

Jesus Manuel Gomez quit his restaurant dishwashing job when he saw the effect his long work days had on his 10-year-old son with special needs.

Although he was scheduled to work from 11 a.m. to 10 p.m., the Honduran native said through a Spanish-speaking interpreter that he would get out between midnight and 1 a.m. and then still be asleep when his son left for school the next morning.

“He takes medication so he can concentrate and gets treatment at school,” Gomez said of his son. “But when I saw what was happening with my schedule, that it was impacting his ability to focus even though he was getting treatment, I only worked there a couple of weeks.”

More than one-fourth of the state’s 885,000 hourly employees who potentially face wide swings in work schedules are parents of children under the age of 18, putting their kids at risk for behavioral issues, a newly released report by the Washington Center for Equitable Growth concluded.

Women and men of color are more likely not to have any input on their schedules and people of color, particularly black and Latina women, are more likely to have unstable work schedules including extended shifts, last minute “on-call” shifts, and shifts canceled after they have arrived at work, compared to their white counterparts, the report found based on data from the national Shift Project.

Their children are paying the price, said U.S. Rep. Rosa DeLauro, D-3rd District. “It’s really unbelievable that women of color have no input into their schedules,” DeLauro said. “How do you plan for childcare or family care? What if you want to go to school? It takes a toll on kids.”

The bill, which has failed to pass twice in recent years, includes provisions to protect hourly workers who ask for shift changes from retaliation and protect employees from being forced to work a closing shift at night and an opening shift the next morning, commonly called a “clopen,” less than 11 hours later.

“What happens if your kid is sick?” DeLauro said. “This has very serious implications for families. We’re dealing mostly with women. This is a lack of respect and lack of dignity for their lives or their family’s lives.”

It’s common for low-wage workers with on-call or “just-in-time” schedules to choose between paying bills or going without something they need, said Norma Martinez Hosang, Organizing Director for Make The Road, a non-profit that advocates for immigrants and low-income residents in Bridgeport.

“People don’t get a schedule week by week so they can’t plan,” Martinez Hosang said. “Getting called off from work is another problem. You’re expecting to go to work and you get there and you get sent home. They were counting on that money. You can imagine in terms of budgeting what that does. Families who are making minimum wage are already struggling.” 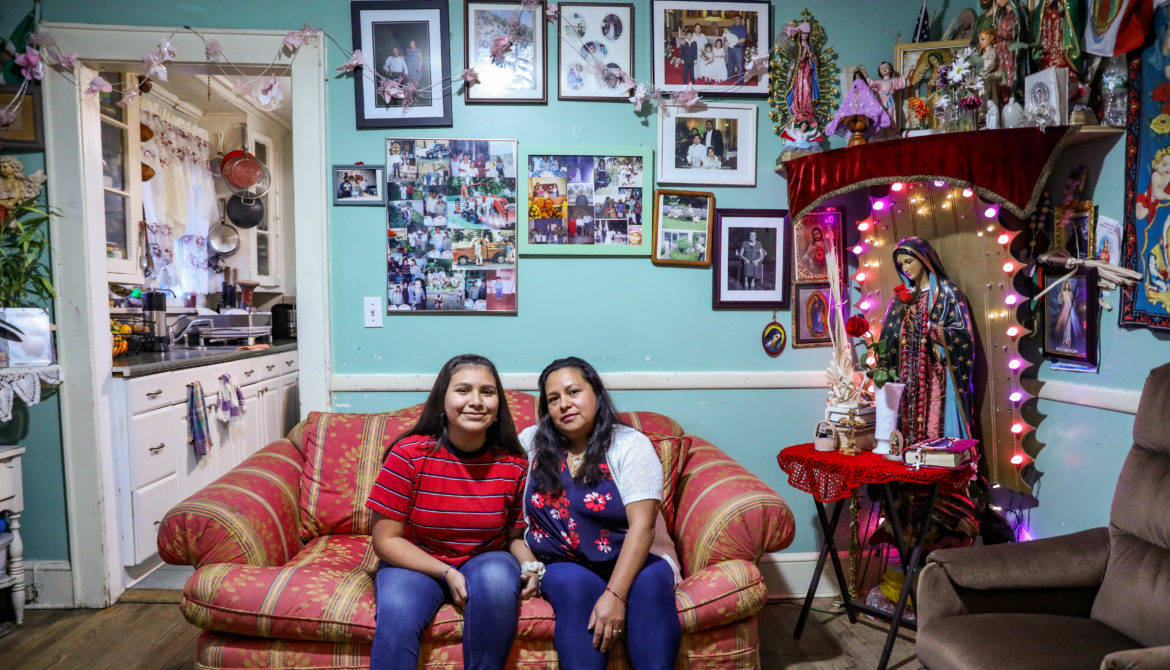 Emelia Huerta and her daughter, Flor, in the living room of their Bridgeport home. Huerta worked through a temp agency as a housekeeper. She said she often worked more hours than she was originally scheduled. Those extra hours were never paid. She quit and now runs her own cleaning service.

But the impact of scheduling inequality extends far beyond a paycheck, experts said. Nationally, parents who work on-call or experience last minute shift changes have 15 days annually when their children are in the care of a sibling younger than age 10 or have no childcare at all compared to parents with better work schedules who average nine days annually with no suitable childcare, the study found.

Children of parents with unstable schedules are more likely to have multiple caregivers, which adds stress and makes it less likely for them to forge good relationships with each. The children of on-call workers are also more likely to experience sadness, worry and anger, exhibited through arguing, tantrums and disobedience, the center’s report said.

“My children would throw it in my face,” said Emelia Huerta, a 45-year-old Spanish-speaking Bridgeport resident who talked as Martinez Hosang interpreted. “They’d say, ‘You never eat with us, you’re never here for us, Dad takes us to get ice cream, but you’re never here.’ ’’

“This has very serious implications for families.

We’re dealing mostly with women. This is a lack of respect and lack of dignity for their lives or their family’s lives.”

Like Gomez, the amount of work Huerta was assigned in her commercial cleaning job night after night never allowed her to finish on time. She quit after six or seven years and now does cleaning on her own so she has a more flexible schedule. “On the one hand we needed the money, but I was also missing time with my children,” she said.

The instability prohibits on-call or hourly workers from going to school to better their circumstances, work a second job, budget for monthly bills and needs or move up the ladder, said Carlos Moreno, communications director of the Connecticut Working Families Party, which is supporting a state bill that would also tighten scheduling laws for hourly workers.

“You’re living your life on call,” Moreno said. People often must take multiple jobs to maintain housing and other necessities, which is a challenge if one employer continually asks workers to come in at the last minute, he said.

It’s also a challenge when an hourly worker must pay for childcare and then is told to go home because it’s slow, Moreno said. “You’re hiring a babysitter and then you don’t work,” he said. “It’s a situation that’s untenable. It leads to the quicksand effect where they feel they can’t get out.”

DeLauro acknowledges that her bill has little chance of passing under the current administration. It will be up to individual states to take up the cause and press for changes in corporate behavior, she said.

“We’ve moved to an economy based on part-time work,” said state Sen. Julie Kushner, D-Danbury, who plans on backing a fair-scheduling bill with her Labor and Public Employee Committee co-chair, Rep. Robyn Porter, D-New Haven, in the upcoming state legislative session. Businesses benefit by having a workforce that can adjust to the ebb and flow of clients, she said.

“But the toll it takes on families and individuals is incredible,” Kushner said. “You can be called in at any time. It really makes it hard to plan childcare or your budget. There has to be some controls on the system. There should be some cost to the employer.”

The bill will likely include provisions requiring employers to give 72 hours’ notice for shifts and pay employees for at least a few hours if a scheduled shift is canceled.

A few similar bills failed to make it out of committee in the past two state legislative sessions. Nearly every trade association representing the restaurant, hotel and retail industries in the state spoke out against the proposal during a legislative public hearing.

Few on-call or hourly workers have a union that can negotiate for them, which is why the state needs to create a more level playing field, Kushner said. “This will make a difference,” she said. “Not just for the workers, but for the quality of life in Connecticut.”