People struggling with hunger suffer from a disproportionate number of chronic illnesses and often rely on food pantries for their groceries. So, pantries are now being urged to undergo a sea change and abandon their traditional emphasis on calories and nonperishable items in favor of more nutritional food.

In Connecticut, 440,000 people are food insecure, which means they have limited or uncertain access to sufficient nutritious food, according to 2017 U.S. Department of Agriculture figures, the latest available. They comprise 12.2 percent of the state’s population.People with food insecurity are 25 percent more likely to have heart disease and diabetes, and 50 percent more likely to have kidney disease, cites Feeding America, a national food bank network.

“These issues can be prevented or managed better with a proper diet rich in fresh fruits and vegetables, lean meats and whole grains,” said Michelle Lapine McCabe, director of the Center for Food Equity and Economic Development, based in Bridgeport. But, she said, “food most often available to this population is typically the opposite of healthy—high-sodium and high-sugar canned goods, refined grains and processed meats. Food pantries have the potential of making health-supportive foods readily available to a population that needs it most.”

The state’s two food banks are leading efforts to provide pantries with nutritious food and to promote the link between food and health.

Connecticut Food Bank provides about 55 percent and Foodshare about 75 percent of the food their member pantries get statewide. In a Feeding America rating of 200 food banks, Connecticut Food Bank is ranked 19th and Foodshare 23rd in terms of nutritional foods they distribute. Pantries also get donated food from grocery stores, food producers, individual donors and food drives, and they purchase food as well.

An estimated 125,000 people use the state’s 357 food pantries. In addition, the food banks bring mobile pantries to some 114 sites.

A recent survey of a sample of food pantries conducted by the UConn Rudd Center for Food Policy and Obesity found that food quality was “mid-range, not as bad as we suspected, but there’s certainly room for improvement,” said Kristen Cooksey Stowers, a postdoctoral fellow at Rudd. Pantry directors in Bridgeport, Cheshire and Hartford said that space limitations and lack of refrigeration are barriers to change and expressed concern that if they only relied on fresh food, they wouldn’t have enough inventory, Stowers said.

While improvements at pantries are ongoing, a total conversion to mostly healthy food “will take years,” said Katie Martin, vice president and chief strategy officer of Foodshare, the food bank for Hartford and Tolland counties.

People facing hunger were “the receptacles of whatever food the rest of us didn’t want,” said McCabe, whose agency is part of the Greater Bridgeport Council of Churches. “The quality of food was making them sick,” she said.

Stacy Downer of New Haven relied on pantries as her source for food after her employer went out of business and she lost her job. She found ones with fresh produce, chicken and meat, and ate healthier. She lost 60 pounds and her blood pressure has improved. Now that she no longer has to choose between buying food and paying her bills, she spreads the word about pantries, often taking friends and family with her. “You have to tell people, you can’t be ashamed to go to pantries,” she said. 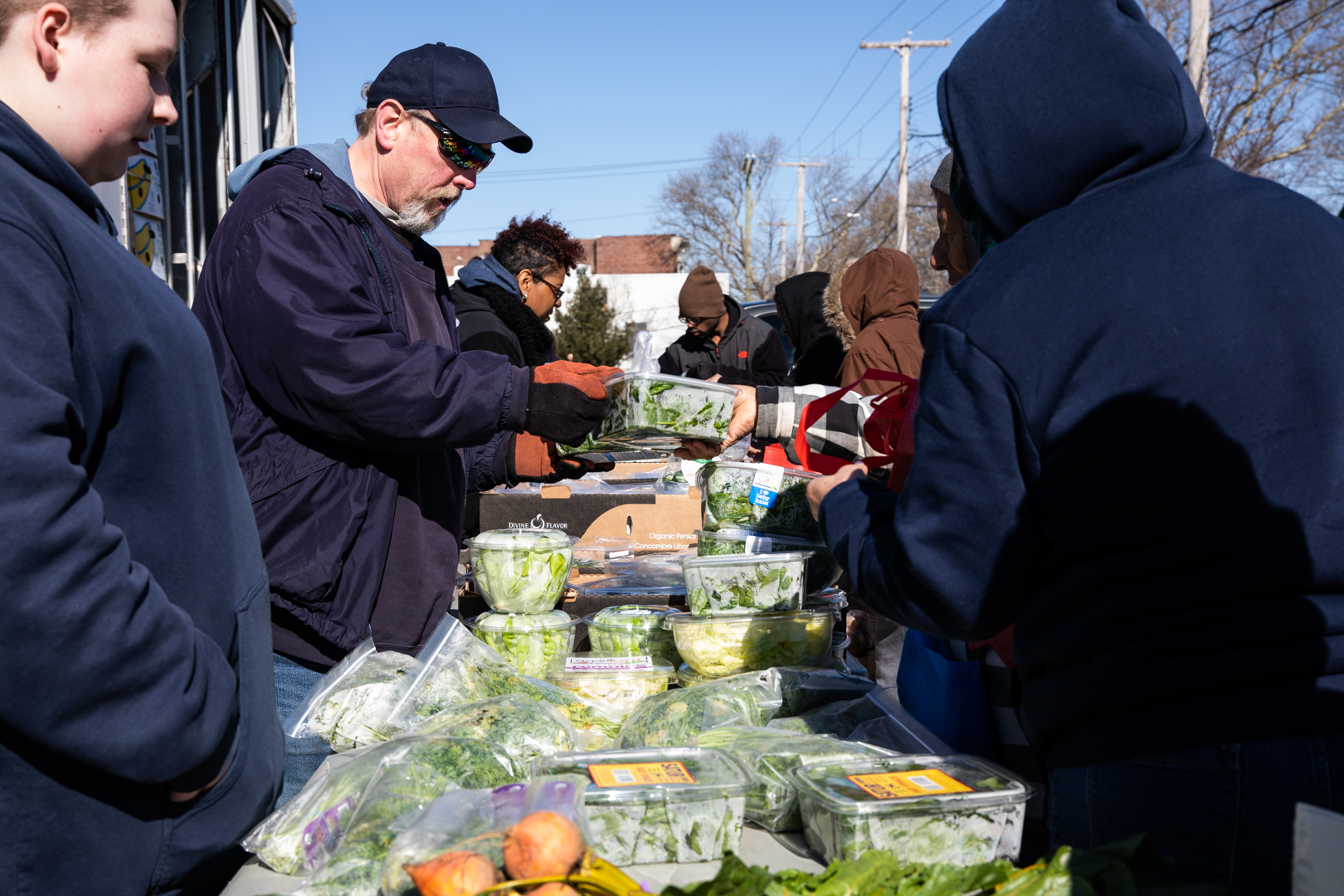 Click through our photo gallery using the arrows above. Here, volunteers hand out donated produce to New Haven residents. (All photos by Carl Jordan Castro) 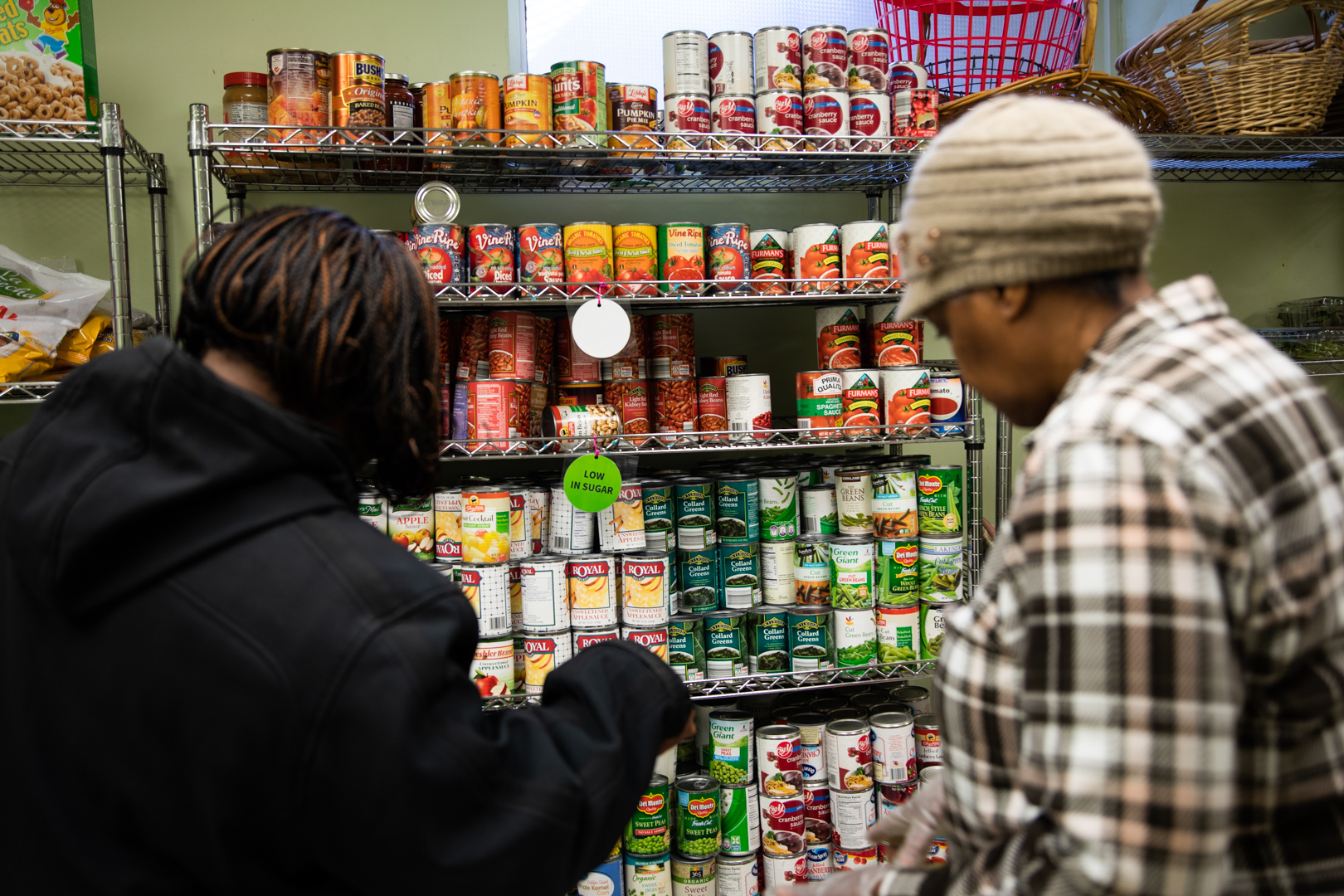 A volunteer helps a client shop for low sugar foods at the Thomas Merton Center. 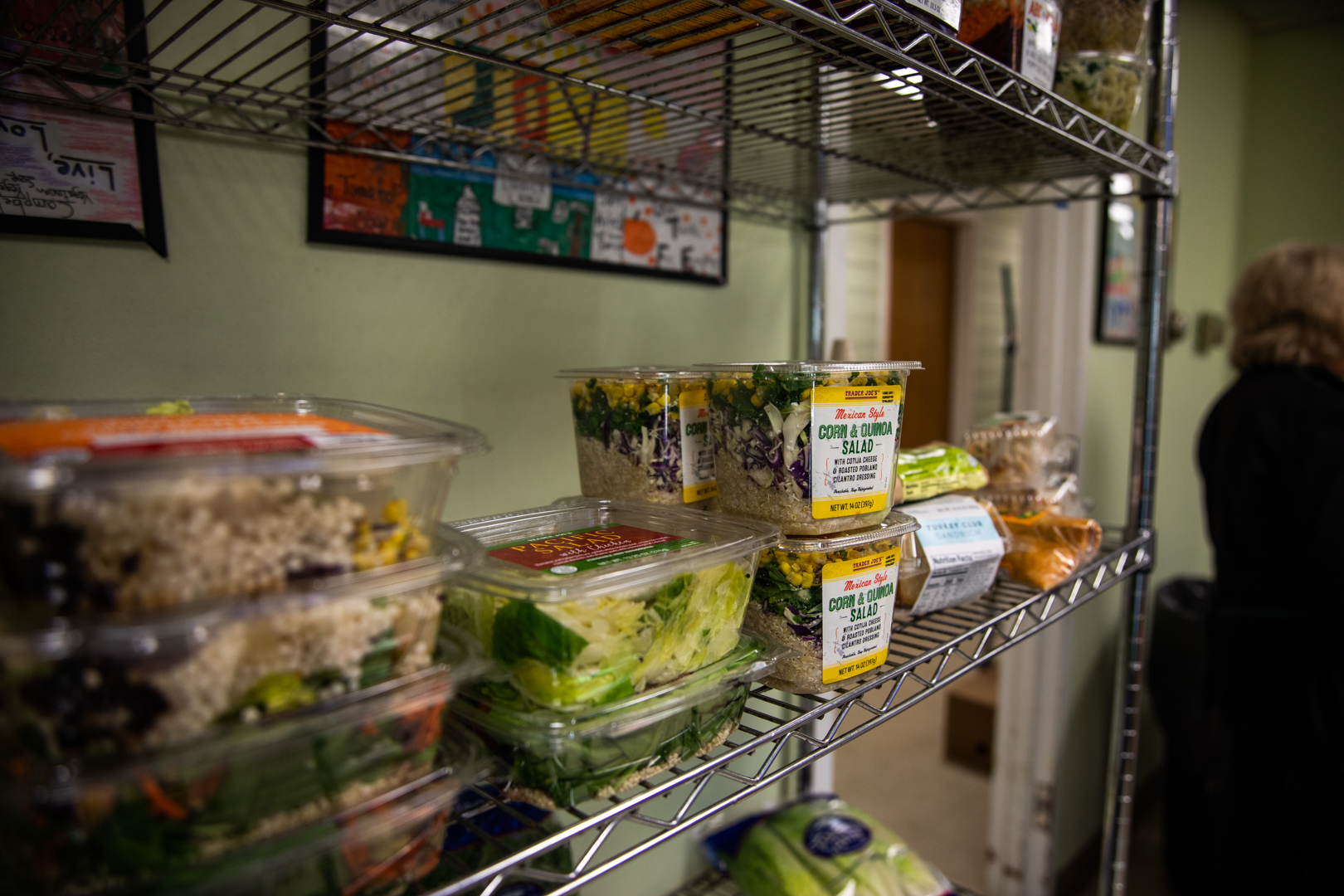 Produce and ready-made salads are among the healthy food choices at the Thomas Merton Center, Bridgeport. 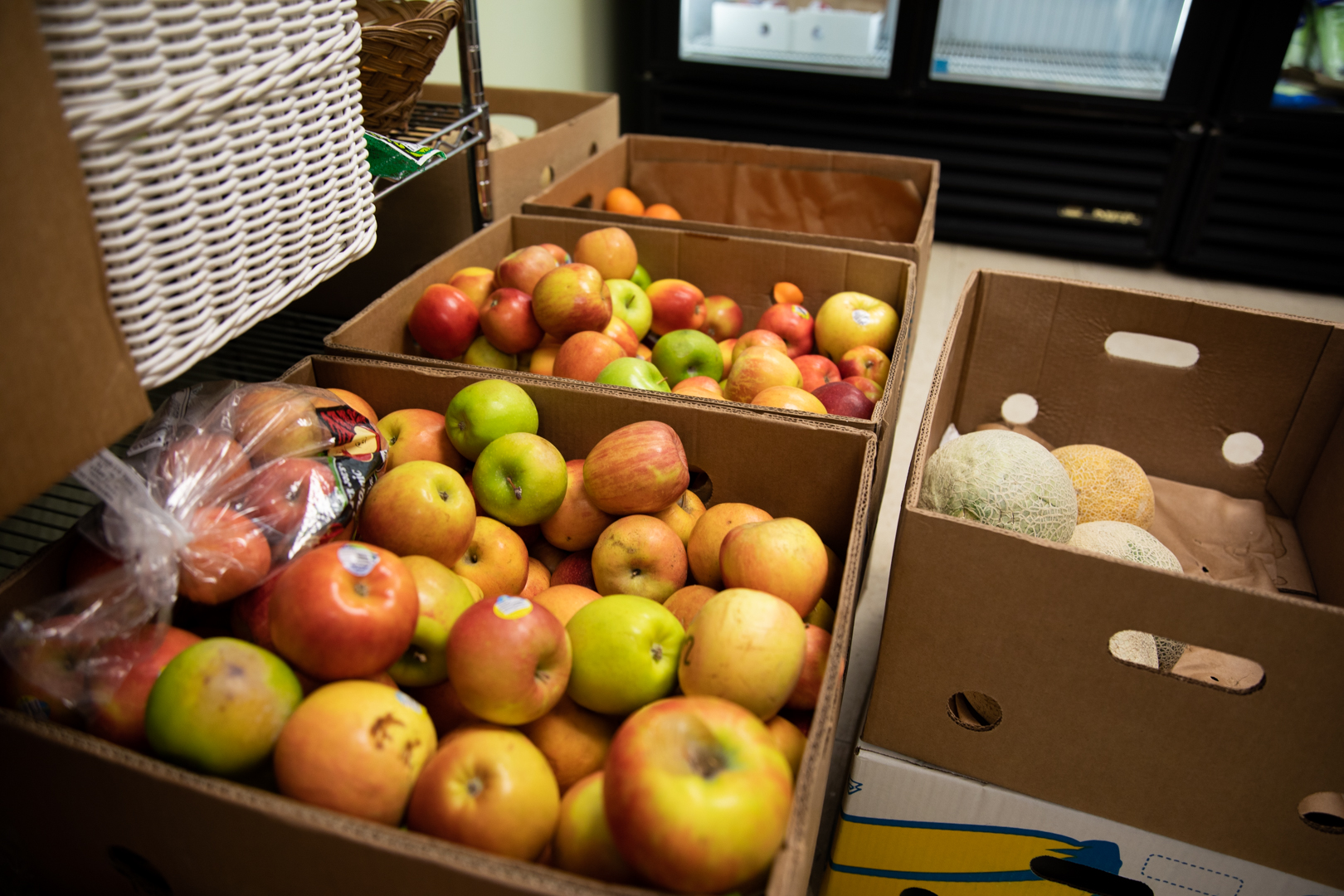 Fresh fruits are available at the Thomas Merton Center, Bridgeport. 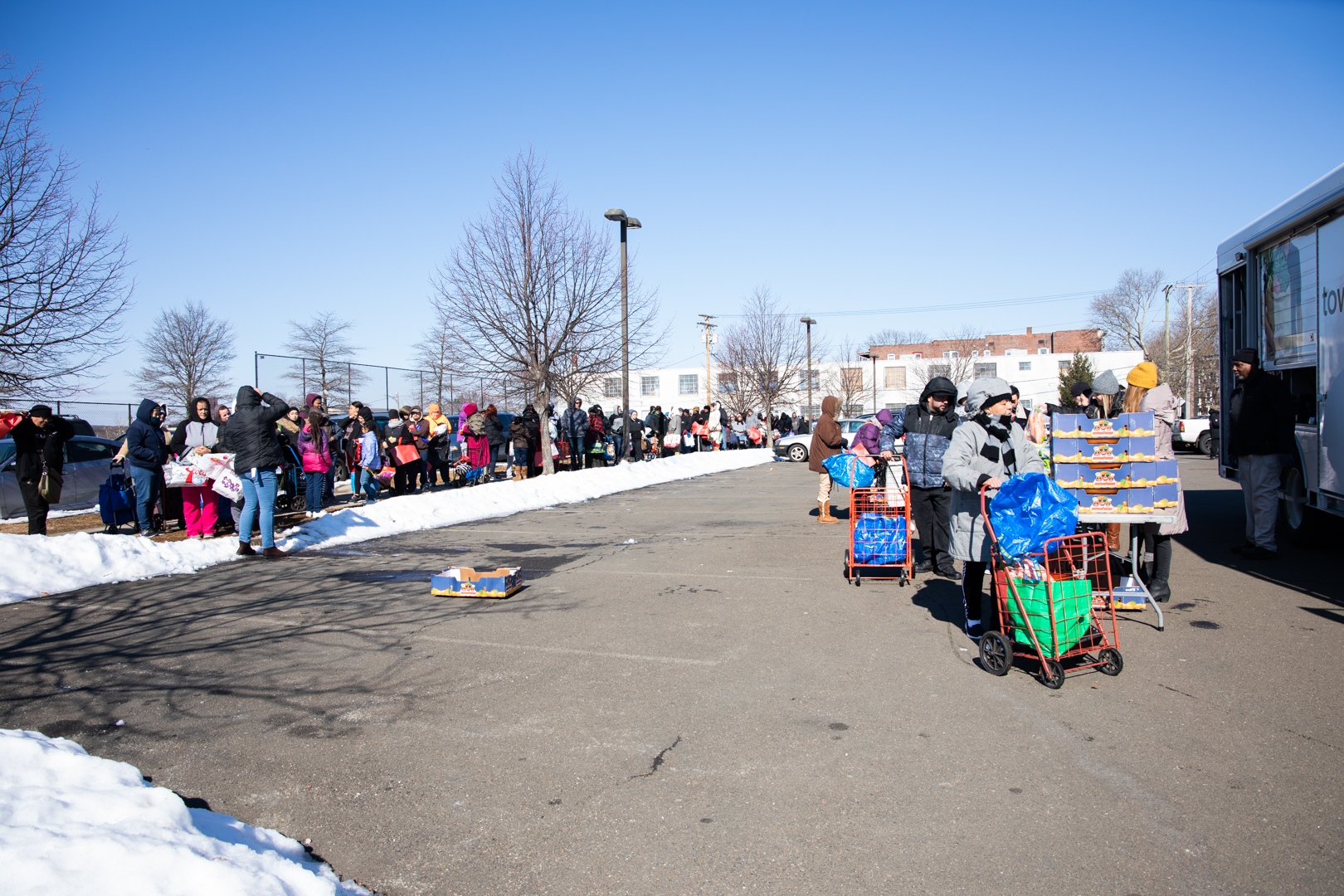 People in Fair Haven wait in line to receive food from the mobile food pantry. On this day, 187 people were served. 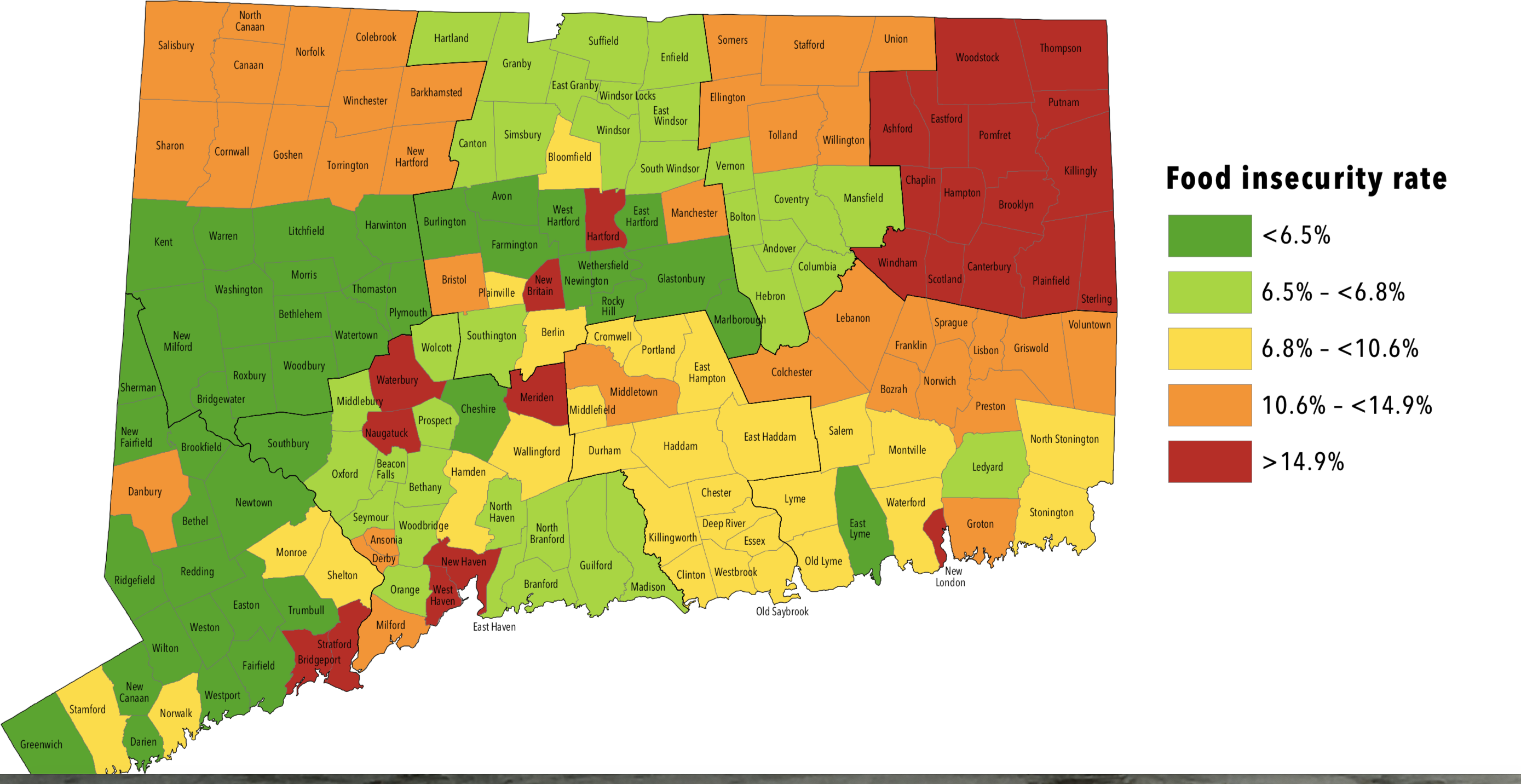 In Connecticut, 440,000 people are food insecure. (Map by Zwick Center for Food and Resource Policy)

Khadijah Muhammad of Bridgeport shopped at food pantries to feed her family of three children as she balanced day-care jobs and attending college. She often found long lines, shortages of food and poor-quality frozen foods.

Now, Muhammad is a food pantry coordinator at the Thomas Merton Center in Bridgeport, which fosters healthy eating and prominently displays nutritional food. She finds that clients minimize their needs because they are ashamed. “I tell people, you don’t want to get down to zero food. What kind of life is that? People think they have to have nothing to get help,” she said.

“When you don’t have the money to buy what you need, it takes your energy and your life away from you,” Muhammad said.

Pantries and health care clinics and hospitals have also formed partnerships to educate people about the importance of healthy eating and provide food and other services.

At some pantries, health care screenings take place and appointments for check-ups with a doctor are made for clients.

Dr. Mellisa Pensa, Fair Haven’s clinical lead for health equity, said 30 percent of their patients are food insecure, 20 percent have diabetes—compared to a national average of 9 percent—and 25 percent are uninsured. “For us to provide them with a basic need is really important” for their health, Pensa said. Since center staff volunteer at the pantry, patients “see our faces. It’s familiar. They are comfortable going there,” she said.

A mobile food pantry recently started operating at Americares Health Clinic in Bridgeport, and Bridgeport Hospital is also planning to host one. The first hospital-based food pantry in the country opened in 1976 at Mt. Sinai hospital in Hartford, part of St. Francis Hospital and Medical Center.  It serves 1,600 families.

Lawrence + Memorial Hospital in New London has given $50,000 to Fresh New London to enhance food access for food insecure people, including planting gardens where food will be available for anyone to pick, said Laurel Holmes, director of community partnerships and population health. Hospitals are also screening their patients for food insecurity. Anne Diamond, president and CEO of Day Kimball Healthcare and Day Kimball Hospital in Putnam, said that clinicians discovered that a 74-year-old patient had been skipping meals and medical appointments because she didn’t have money or transportation. The hospital helped her get benefits from the federal Supplemental Nutrition Assistance Program, (SNAP), formerly known as food stamps.

Food pantries vary, ranging from rooms with canned goods to grocery-store settings with shopping carts and nutritional choices. Allotted food amounts are often based on family size. Some pantries are open only to residents who live in zip codes served by the organization.

Martin, of Foodshare, invented a food-rating system called SWAP (Supporting Wellness At Pantries), which is being adopted by both food banks and is used in about 20 pantries in Connecticut and others out of state. It categorizes food based on nutritional value and assigns it a traffic light color: green for the healthiest; yellow for moderate healthiness; and red for unhealthy. The goal is to help food pantries select and display nutritional foods, indicate whether they are appropriate for certain medical conditions, and guide clients to choose healthy foods.

“The attitude in this field has changed dramatically,” said McCabe. But, she added, “a lot of work needs to be done.”

You can find a list of Connecticut Food pantries here.