Three months after a new children’s advocacy office opened at Yale-New Haven Hospital, Alice Rosenthal has conquered bedbugs, kept utilities from being shut off, and helped get adequate school support for a kid with severe medical needs.

“We’re off to a fast, great start,” said Rosenthal, the attorney on site for the venture.

The office is a partnership between the hospital and the Hartford-based Center for Children’s Advocacy, a nonprofit that advocates for the legal rights of children who suffer from abuse, neglect or lack of access to critical services. 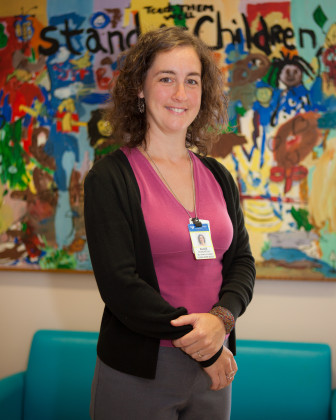 The partnership takes a holistic approach to care by tackling not only kids’ medical problems, but the issues at home and school that might be preventing them from getting well. Rosenthal, representing the Center for Children’s Advocacy, works with the hospital staff to identify and resolve those issues. She already has “a ton” of referrals.

In the long run, the partnerships help control medical costs by resolving the root causes of a kid’s illness. This comprehensive approach is increasingly common with many at-risk populations – from the homeless to geriatric patients to people suffering from chronic disease.

The Affordable Care Act has propelled the efforts forward by broadening access to the health care system. “This is really a time to start thinking proactively,” Sicklick said.

Yale-New Haven’s partnership is funded by the hospital, a grant from the law firm of Wiggin and Dana, and community support. Aseltyne said the hospital intends to be second to none in implementing the partnership. Allies in the community – including Yale law students and other attorneys in New Haven – are eager to get involved.

“I think there was a bit of pent-up demand for this,” Aseltyne said. He sees it in the response Rosenthal is getting at the hospital. When he introduced her to one group of normally nonplussed doctors, he said, they applauded.

Sicklick sees it too. “From the ground up, the medical folks recognized it as a critically important part of the fabric of patient care,” he said. “They know what it’s all about. They instantly recognized the value.”

He said medical students, law students and staff at Yale began talking about forming a partnership several years ago. His office got involved when it became clear there was no other organization to get things rolling. It all came together eight or nine months ago.

A native of New Haven – she was even born at Yale-New Haven and went to city schools – Rosenthal worked in child advocacy in New York before becoming a lawyer.

In addition to working with families to resolve issues, she is coaching the staff on how to talk with patients about problems outside the scope of medicine and explaining how to make referrals to her. She also will be training the staff on legal issues affecting children’s health.

Ada Fenick, acting director of the hospital’s Pediatric Primary Care Center, is the medical site director for the partnership. She has been helping Rosenthal meet everyone, from the residents to social workers. Rosenthal is also talking with community organizations.

After getting a referral, she meets with the family to talk through problems and figure out solutions.

Conquering the bedbugs, for example, meant helping the mother get out of her lease. The apartment had been fumigated, but it hadn’t worked. The bedbugs were aggravating one of the children’s epileptic seizures and asthma. Rosenthal also discovered that the kids have learning disabilities and she’s now helping them.

And the family whose utilities were being shut off? Rosenthal got a medical exception from the power company. She’s also helping the family see if they qualify for Supplemental Social Security Income.

And she’s helping the kid with severe medical needs make sure he gets the services he needs as school starts.

The biggest challenge for families, Rosenthal said, is the lack of resources, particularly housing. “There are just so few housing options for low-income families here in New Haven,” she said. Poor housing affects the well-being of the entire family and plays a role in how well kids do in school.

“There are so many barriers people face. If you don’t have a car or have a disability, it’s a problem. One family walks two miles to Yale-New Haven Hospital because they can’t afford bus fare. I don’t think people are talking about that in Washington,” Rosenthal said. “That’s why this project is so great. I’m excited to be part of it.”