PTSD, a debilitating mental health condition, afflicts between 5 and 23 percent of the 3 million veterans who have served since the 9/11 terrorist attacks. It costs the federal government more than $2 billion just in the first year of PTSD care for veterans, according to a 2012 Congressional Budget Office study. 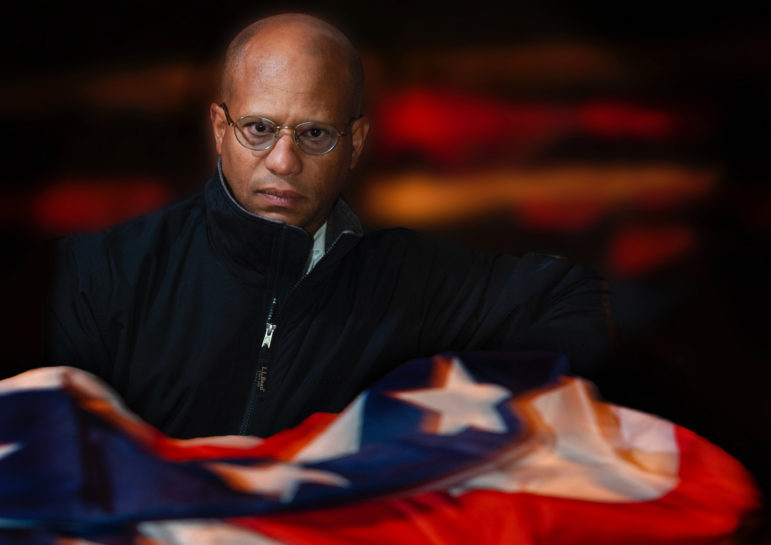 Michael Thomas, 49, of Milford served 17 years in the Navy and Navy Reserve, deployed to Afghanistan twice.

But, 17 years into the current conflicts, the link between PTSD and life consequences in this cohort of veterans is still unproven because there haven’t been longitudinal studies on it. Veterans’ advocates say this is a symptom of national indifference to the ongoing wars.

So, some are speaking out about their experiences to raise awareness.

Thomas, 49, a Milford veteran with PTSD and traumatic brain injury, graduated from Yale Law School before he spent 17 years in the Navy and Navy Reserve, working in intelligence. He was deployed twice to Afghanistan, where it was routine to be banged around in Humvees while ducking explosives and to be constantly trying to save others from death and injury. At home, Thomas was angry and “drank like a fish,” he said. His first marriage dissolved.

In his second marriage, with PTSD symptoms including hypervigilance, he slept with a loaded gun under his pillow and had ammunition “all over the place.” One night his wife woke him as he screamed during a nightmare. Lost in his flashback dream, he didn’t recognize her and nearly hurt her. “Really bad things could have happened,” he said.

Thomas, who spent about seven years in cognitive behavioral therapy at the VA, is now pursuing his fifth career since he left the Navy in 2008. He recently started a waste-to-energy company.

Rand Corporation, a nonprofit policy think tank, has done dozens of research reports on veterans for the government and other entities, but hasn’t received a request to pursue the PTSD-life consequences connection in the post 9/11 cohort. “There are not many funders who prioritize that type of work,” said Terri Tanielian, a Rand expert on veterans’ mental health.

Tanielian is an author of a 2008 study on consequences of post-combat mental health. It relied mainly on data from veterans of previous eras and on civilians’ experiences and called for additional research on post 9/11 veterans, which hasn’t happened.

The Henry M. Jackson Foundation for the Advancement of Military Medicine is doing a study of the effectiveness of programs that these veterans access.

A 2017 survey of IAVA members found that mental health and suicide prevention, jobs and reform of the U.S. Department of Veterans Affairs were top concerns. The organization has referred 62 Connecticut veterans to 96 resources for help with employment, finances, education, disability claims, mental health and community involvement.

State Veterans Affairs Commissioner Thomas J. Saadi said he has seen “many veterans go on to rebuild what they’ve lost in their lives once they receive the support services they need.”

Boehm, 34, a Meriden veteran, lost out on a career as a lab technician, a job she held in the Army. She planned to continue that work after discharge, but after being raped twice in the military, she couldn’t mentally separate the Army job from the rapes. After her discharge, she lined up interviews for lab tech jobs, but couldn’t go through with them. “I started having flashbacks, crying,” she said.

After the rapes, Boehm became suicidal, drank excessively, and was angry. She was diagnosed with PTSD. Friends dropped her and family “walked on egg shells” around her, she said.

She plans to graduate from Southern Connecticut State University in May. She said her PTSD deprives her of getting high grades because of related anxiety, depression and problems concentrating. She works as a nanny and co-owns a business that makes mermaid-themed items. She hopes to pursue graduate school.

“I’m in a better head space than I was,” she said.

Jason DeViva, a VA Connecticut Healthcare clinical psychologist, said with “effective treatment, we can remove some of the obstacles that stand in the way of veterans living the kind of life they want to live.”

But access to treatment is still a hurdle for veterans with PTSD, ranging from long waits for VA appointments to distance to receiving private care, said Hannah Sinoway, an IAVA services officer.

Murray, 44, a Bridgeport Army and National Guard veteran, faces other obstacles. He is living in VA transitional housing in Leeds, Massachusetts, after being in prison for two years.

Murray said he was convicted of violating a protective order initiated by his ex-wife and for threatening. He attributed his marital problems to PTSD caused by his exposure to death and ambushes in Afghanistan. He said sometimes he shut down and didn’t talk to his wife for weeks. He had road rage. His wife accused him of hitting her when he was having nightmares.

PTSD “ruined my life,” said Murray, who has an associate’s degree in business management from Sacred Heart University and was active in the Veterans of Foreign Wars. A longtime truck driver, he lost his commercial driver’s license and job after he was arrested.

Thomas Burke, co-founder of High Ground Veterans Advocacy and pastor of Northfield Congregational Church in Weston, said long wars and public indifference can cause veterans with PTSD to feel hopeless.

“Because our nation doesn’t take the end of the war seriously, that graduates to ‘why would my PTSD ever end?’” he said.

If you are a veteran and need assistance: