Once a week, every week, the health center at Stamford High School offers sophomore Roger Sanchez an oasis—someplace he can talk to a trusted adult about life’s pressures and problems, a place he feels free and unjudged.

School work, sports commitments, family and social obligations: life as a teenager can be stressful, he says. If it weren’t for the health center, conveniently located where he spends most of his days, he would have a much harder time accessing counseling sessions that help him cope with anxiety. 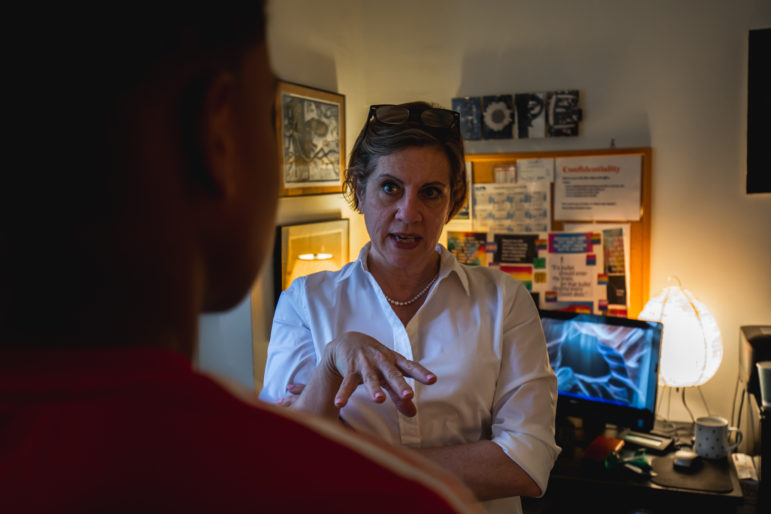 “The health center helps me out academically, emotionally and physically,” he said, and he recommends it to friends. “They get nervous, kind of, but I try my best to get them to come in. They never regret it.”

Sanchez, 16, is among a growing number of black and Hispanic teens receiving mental health services at school-based health centers—services, data show, they’d be much less likely to get or stick with if they pursued them elsewhere in their communities.

“For many students, this is the primary place where they get their care,” said Jesse White-Fresé, executive director of the Connecticut Association of School Based Health Centers.

White-Fresé suspects the number of males served is higher than reported since the data includes only students whose parents agreed to disclose ethnicity during enrollment.

While students seek services for various reasons, research shows black and Hispanic students are more likely than their white peers to experience depression in particular.

In 2015, 36 percent of Hispanic high schools students and 27.3 percent of black students reported feeling so sad or hopeless every day for two or more weeks that they stopped doing some of their usual activities, according to the state Department of Public Health’s 2015 Connecticut Youth Risk Behavior Survey. By comparison, 22.6 percent of white students answered the same.

Against that backdrop, just 25.4 percent of all students said they receive the help they need when they feel sad, empty, hopeless, angry or anxious, the survey said.

Statewide there are more than 120 school-based health centers providing medical and mental health services to students, most of which have part of their operating expenses funded by the state.

Centers are often staffed with medical providers who can prescribe medication, and bill Medicaid, HUSKY A and HUSKY B for services. A school nurse can refer a student to a center, but a parent must sign a permission form for their child to receive care.

During the 2007-08 and 2008-09 school years, black and Hispanic students participated in an average of 13.6 therapy sessions, each session lasting 30 to 35 minutes. That same demographic typically stops seeing providers in their community after two or three sessions, according to the association. 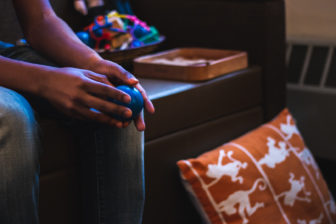 A student holds a stress ball while conversing with social worker Emily Segal.

“That is quite significant,” said Patricia Baker, president and CEO of the Connecticut Health Foundation, which funded the association’s study. “Schools are the most common setting in which kids can access mental health care.”

Various factors prevent youths from accessing care in their community, said White-Fresé. It often is difficult to get an appointment outside of school hours, for instance, and lack of transportation can be problematic.

“There are some real disparities that are happening but in this [school] setting those disparities are reduced,” she added.

If he couldn’t receive services in school, Sanchez says, it would be difficult to fit therapy sessions around school, sports and church obligations. He began accessing services in seventh grade at his middle school. At Stamford High School’s center, he has a standing weekly appointment with social worker Emily Segal and can often get a same-day appointment if an emergency arises.

“It makes life easier for me,” he said.

Segal has been working at the center, run by nonprofit Family Centers, for 17 years and sees a growing number of students seeking help for anxiety.

“There’s a lot of stress on these students,” she said. “It’s a tense, stressful time.”

Segal is a valuable resource “when you need someone to talk to,” said Berwens Desgazon, 15, a sophomore who receives mental health services. “If you have an emergency, you can just walk a couple of steps to get help.”

Desgazon has had weekly one-on-one sessions with Segal since last year. He says the center is a place he feels comfortable and safe discussing what’s happening in his life.

At Windham High School, which also has a health center, wellness center therapist Carolyn Franzen says being in the school helps her bond with students.

Windham High School’s student population is 70 percent Hispanic, she said, and roughly 90 percent of the school’s total population is enrolled in the center, which is affiliated with Windham Hospital.

In addition to the one-on-one counseling available at many centers, some offer group therapy as part of the Cognitive Behavioral Intervention for Trauma in Schools program. That national initiative launched in Connecticut in 2014 and most students who participate are black or Hispanic, according to Jason Lang, vice president for mental health initiatives at the Child Health and Development Institute, which trains mental health service providers.

About 50 Connecticut schools use the program, some of which offer the service at school-based health centers. Geared toward students who have experienced trauma, the program includes 10 group sessions. Statewide, 70 percent of participants are Hispanic, 20 percent are black and less than 10 percent are white, Lang said. Roughly half are males, he added.

Leaving mental health issues untreated can have serious consequences, including truancy, involvement in the juvenile justice system, school suspensions, and aggressive incidents, a study by the Center for Children’s Advocacy at the UConn School of Law found. 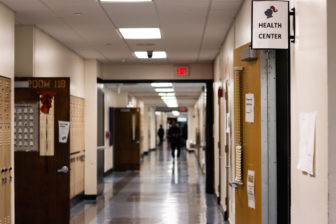 Gov. Dannel P. Malloy’s initial proposal appropriated $9.97 million to school-based health centers in the 2019 fiscal year, nearly a 10 percent reduction from what previously had been budgeted for 2019 and at least the third consecutive year in which state funding has been reduced.

The budget that was passed May 9 allocates $10.7 million to the centers for 2019. While that is a decrease from the $11 million originally slated for the centers in the Democratic budget proposal, it was not quite as severe as the funding cut in the governor’s proposed budget, according to White-Fresé.

“They’ve been experiencing cuts—a little here, a little there,” Baker said. “Connecticut’s done a great job about school-based health centers, but we’re now at the point where tough [budget] decisions are being made.”