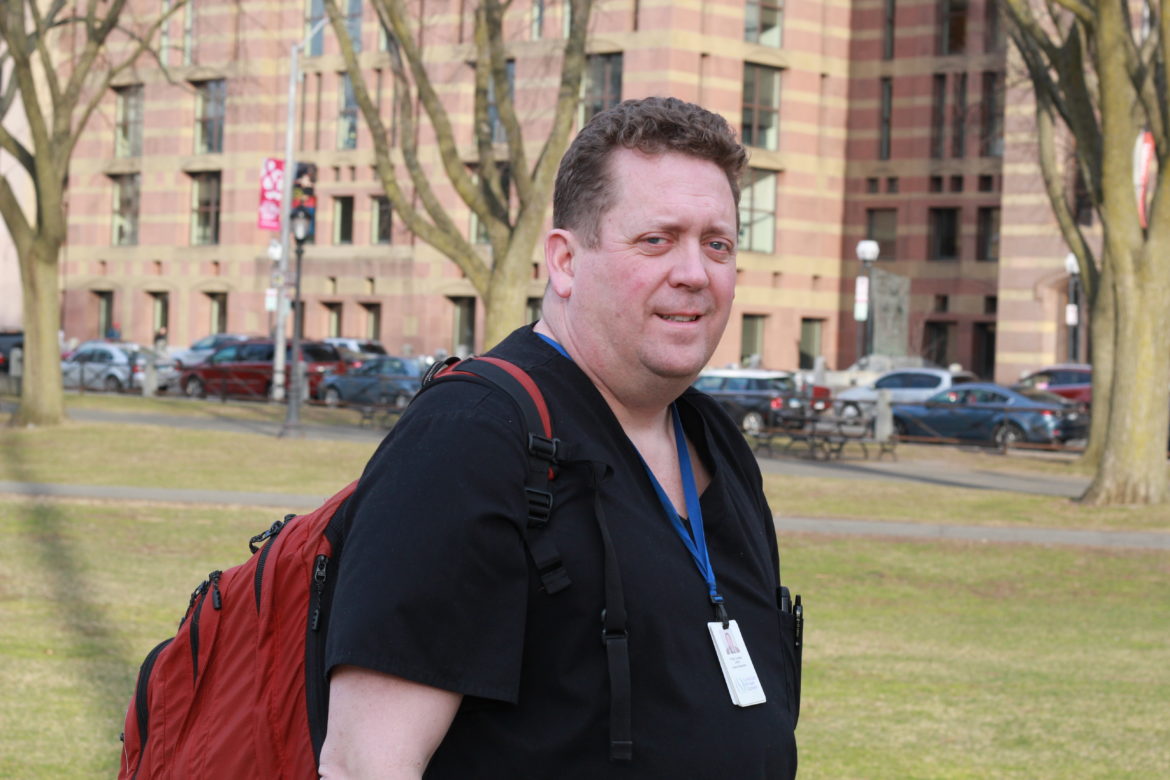 Homeless people tend to have trust issues, but when Phil Costello approaches they typically greet him like family. That’s because Costello, the clinical director for homeless care at Cornell Scott-Hill Health Center in New Haven, puts effort into building relationships and trust so he can get people the medical care they need.

Quentin Staggers, homeless for nearly a decade, credits Costello with saving his life. He awoke one day on a bench on the New Haven Green with a blinding headache. He saw Costello and asked for help. Costello took Staggers’ blood pressure—a frightening 200 over 167—and sent him to a clinic, where he got medications to stabilize his condition.

“If it wasn’t for him taking my blood pressure right then and there, I probably would have had a heart attack,” Staggers says.

Some of New Haven’s homeless call Costello the “street doctor.” And while he’s an advanced practical registered nurse (APRN) rather than an MD, he and his team provide on-the-spot medical care for homeless people where they are—in soup kitchens and shelters, in parks and under bridges, and on some of New Haven’s meaner streets. They send people to the clinic for more serious issues, including mental illness and drug addiction. They run one of the most extensive such outreach programs in the state.

Cornell Scott’s program is part of a movement that is gathering steam across Connecticut. In Hartford, Stamford, Bridgeport, Norwalk, Danbury and other cities, health care providers are collaborating with housing advocates and others to offer better care for homeless people. They’re reaching out to provide people the shelter, food and medical care that can improve the quality of their lives, and, potentially, bring them back into the mainstream.

At the same time, these organizations hope to reduce the high cost of providing health care for a hard-to-serve group. Roughly 40 percent to 45 percent of the most frequent visitors to the state’s hospital emergency rooms are homeless, according to a 2017 study by the Partnership for Strong Communities. For instance, one homeless man visited Norwalk Hospital 110 times in a single year. At more than $1,000 per incident, the cost of those visits quickly adds up. Experts say the state could save tens of millions of dollars per year by treating people on the street or in clinics instead.

“When Phil and the outreach team provide care in the field, it can prevent a whole series of ER visits and inpatient hospital stays at exponentially greater cost,” says Michael Taylor, CEO of Cornell Scott.

Those cross-agency collaborations help, too.

Seven years ago, officials at Middlesex Hospital realized they had to respond to overuse of the ER by homeless people. It was expensive and disruptive. They created the Middlesex County Community Care Team (CCT) to coordinate services for the most frequent users of the hospital.

Today that CCT includes representatives from 14 community organizations, including health care providers, soup kitchens and shelters, housing placement agencies, and the state Medicaid system, which funds health care for poor people. They meet weekly, identifying frequent users of the ER, getting their permission to share information about them, and developing individualized plans for health care, housing and social services. “We all work together to get the person what they need and to get them functioning again,” says Terri DiPietro, director of Outpatient Behavior Health Services at Middlesex Hospital.

The Middlesex CCT has delivered impressive results. In the first year, 2013, ER visits by high-frequency users were reduced by 63 percent. In 2016, approximately $1.7 million in ER visit costs were avoided.

Not surprisingly, the community integrated care model is spreading across the state, with activities in 15 communities now. “Every community is waking up to the need for this,” says Terry Nowakowski, chief operating officer for the Partnership for Strong Communities in Hartford.

The CCTs have produced many success stories. In Danbury, a man who had been living in a van and was poisoned by using a camp stove for warmth, is now housed, on medication for hypertension and looking for a job. “We’re not done with him, either,” says Kevin McVeigh, a social worker with the CCT who helps homeless people navigate community services.  “We’ll continue to monitor him and help him when he needs it.”

Over the past few years, the state has made substantial progress in finding long-term housing for homeless people. The population dropped from 4,450 in 2014 to 3,387 last year, down 24 percent, according to the Connecticut Coalition to End Homelessness. 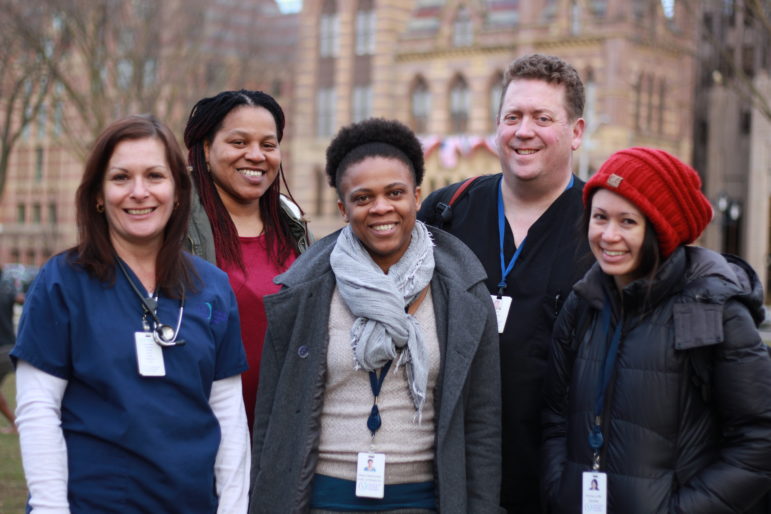 Still, there’s a lot of suffering so it’s important to expand the health care safety net. People exposed to the elements and lacking routine medical care get sick more often and stay sick longer. And, since they often have multiple health problems, treating them tends to be complicated. Ultimately, “they die expensive deaths,” says Middlesex Hospital’s DiPietro.

Health care leaders say they’re hampered by rules for providing and paying for services. Medicaid, for instance, reimburses for those expensive ER visits, but money is tight when it comes to paying for preventive care. “It’s penny wise and pound foolish if you don’t provide preventative and routine care, and people end up in the ER,” says Dr. Charles Herrick, chair of psychiatry at Danbury and New Milford hospitals. “This is where our country is struggling.”

The Connecticut Hospital Association estimates that the state could save up to $28 million in Medicaid-reimbursed ER costs per year if all of 23 regions adopted the CCT program. While the general assembly approved $4.5 million to support CCTs in 2015, the money was never spent due to budgetary shortfalls.

Now, because of looming budget cuts at the state and federal levels, money is going to get even tighter, so health care leaders say they’re relying on ingenuity to get things done. To stretch dollars, the Cornell Scott team is recruiting volunteer medical students and retired clinicians to bolster their street medicine program.

For Cornell Scott’s Costello, the medical care his team provides is part of an even higher calling. He says, “Whether you can make people better or not, the important thing is to treat them with respect, to provide an open ear, and to be there in their moment of need so you can provide some comfort.”

One thought on “Street Medicine: Helping The Homeless Where They Live”