Thousands of consumers statewide are experiencing sticker shock at the pharmacy this year after increases in deductibles and out-of-pocket expenses for employer-sponsored insurance, forcing some to choose between their health and their finances.

Since 2003, drug costs in Connecticut have increased faster than prices across the nation, reports the nonprofit Connecticut Health Policy Project. The advocacy group also found that Connecticut residents spend more per person on prescriptions than residents in all states except Delaware and that rate is rising much faster than in other states.

According to the State Comptroller’s Office, the total net costs of prescription drugs in the state employee health plan rose 29 percent, from $257.6 million in 2014 to $332.3 million in 2017, with diabetes drugs the most expensive therapeutic class.

Some of the companies to hike prices on dozens of medications by more than 9 percent this year include Allergan Plc, Insys Therapeutics Inc., Horizon Pharma Ltd., and Teva Ltd, according to Jefferies LLC, a New York-based investment advisory firm.

“Shame does not work. Competition does not work. What’s left? Governments saying what they’re going to pay for the drug,” said Jill Zorn, a senior policy officer at the advocacy organization Universal Health Care Foundation of Connecticut. “The states are acting because the federal government isn’t.”

Connecticut and other states are stepping in to control costs. Earlier this year, the Connecticut State Healthcare Cabinet recommended, among other measures, the creation of a Drug Review Board authorized to investigate drug manufacturers’ pricing. The cabinet also called for transparency in business practices and for consumers to be charged an amount based on the negotiated price of a drug.

Pharma companies are quick to note that most net price increases have been modest. “For Pfizer’s U.S. biopharma business, as of the third quarter of 2017, the weighted average net selling price increase year to date was 3 percent,” said Sally Beatty, a Pfizer Inc. spokesperson.

But Piyush Bansal, a senior analyst with Frost & Sullivan, points out that Pfizer, which maintains a large R&D facility in Groton, hiked U.S. prices for 91 drugs by an average of 20 percent in 2017. And for Big Pharma, price increases have outpaced the demand. “Maintaining profit margin was the key driver behind price increase rather than demand-supply,” Bansal said.

Legislators say they hear complaints from constituents about drug costs weekly. “Drug prices are way too high, and there are laws on the books that protect drug companies,” U.S. Senator Chris Murphy said. “I want to change those laws, to stop drug companies from overcharging and to lower costs by allowing Medicare to negotiate directly with drug companies.”

Adding to patients’ woes, pharmaceutical companies have extended patent rights on blockbuster drugs to limit competition. For example, the patent for Humira from AbbVie Pharma expired in 2014. But the company filed multiple patents surrounding Humira, from dosage tweaks to delivery methods, avoiding competition from generic products.

Insurers, too, are driving patients to ration their medication. Dr. Prasad Panthagani, an ophthalmologist in Bloomfield, said elderly patients frequently accidentally spill a few drops of glaucoma medication, such as Alphagan or Travatan, when applying it to their eyes. “If the bottle finishes before 30 days, they run out of the medicine,” he said. “Patients forego dosages for the remaining period since the insurance company won’t pay. If there is no optimal control of intra-ocular pressure, patients could lose their eyesight.” Without insurance, a 5 ml, 30-day supply of Alphagan was priced at $208; Travatan at $440.

Nora Duncan, state director at the American Association of Retired Persons (AARP), said seniors are also affected by insurers switching plan formularies in the middle of the year. “HB 7123 is a good bill on trying to limit how much can change. There is a lot of opposition from the pharmaceutical lobby; but that information should stay consistent through the calendar year.”  The bill is before the legislature. 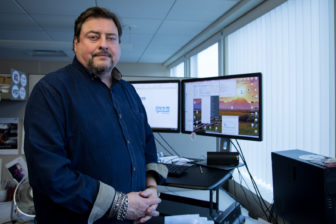 Todd Gray, 54, standing in his cubicle at CPTV in Hartford. He has lived with diabetes for 20 years.

The Connecticut Health Policy Project data show that net pharmacy spending minus rebates from Connecticut’s Medicaid program tripled from 2000 to 2017. After rebates, Medicaid’s pharmacy costs decreased from $542 million in 2015 to $465 million in 2017, a drop of over 14 percent, said David Dearborn, spokesperson at the Connecticut Department of Social Services.

But for most consumers, prices cannot drop soon enough. Todd Gray’s troubles began when the deductible under his insurance plan shot up from $3,000 last year to $7,300 in 2018. Along with it, his blood sugar rose to more than 300 milligrams per deciliter as he experienced blurred vision and edginess, culminating in an “episode of yelling” at work. The 55-year-old diabetic had skipped his medication in January after sticker shock at the pharmacy.

“Walgreens said I had to pay $1,100 for one month’s supply of Humalog.” an injectable insulin, he said. “I didn’t have the money, so I didn’t buy it.” Humalog does not have a generic equivalent. A concerned colleague did some research and found Humalog online at Blink Health for $360. “I pre-pay and pick it up at Walmart,” said Gray, who also shells out $350 per month for Lantus, another diabetes drug without a generic alternative.

Part of the ire against Big Pharma is that the numbers simply don’t add up. For example, it costs just under $5 to produce a 10 ml vial of analog insulin, according to the Type 1 Diabetes Defense Fund. Eli Lilly’s launch price for Humalog in 1996 was $21, and subsequent competition from other insulin makers did not drive down the price. Instead, manufacturers began to increase prices in tandem and Humalog pharmacy price starts at $500, according to GoodRx website.

Despite the savings with Blink Health, Gray does not inject himself with Humalog three times a day as prescribed. “I do it once a day, or sometimes twice, so it can last longer.” His blood sugar is still not controlled.

“This year was tough,” he said. “Next year will be catastrophic if things don’t change.”