Dialysis centers in Connecticut continue to improve their overall quality of care, with 12 facilities reaching Medicare’s highest patient-care rating and just one scoring on the low end of the scale, the latest data show.

That’s an improvement from the 2014 data, when six dialysis centers in the state scored low in quality-of-care ratings. 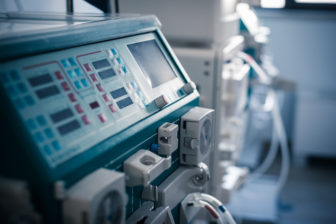 Dialysis helps those with kidney failure remove waste from the body, regulate chemicals and control blood pressure. Most often, patients have their blood removed and cleaned in a machine called a dialyzer before it’s returned to the body. Another form of dialysis uses a cleaning fluid and the stomach as a filter.

Medicare ranks its participating dialysis facilities on a one- to five-star scale based on nine quality-of-care and best treatment practices that range from death and hospitalization rates to whether patients were catheterized for more than 90 days. Other factors include whether dialysis removed enough wastes from a patient’s bloodstream, rates of infection and if patients experienced elevated calcium levels in their blood.

The state has 48 dialysis centers that participate in the federal Medicare program. Just four are nonprofit. Two chains own most of the for-profit dialysis centers in Connecticut: DaVita, with 25, and Fresenius Medical Care, with 13.

The most recent quality-of-care ratings show that the Fresenius-owned Dialysis Center of Newington scored lowest among Medicare-participating facilities in Connecticut, with a two-star rating. The data show the facility exceeded state and national averages of adult patients who had a catheter left in a vein for more than 90 days, had higher rates of hypercalcemia and lower rates of direct access between veins and arteries. Its rates of hospitalization, readmission and death were “as expected,” or average.

Fresenius Medical Care North America said in a statement that “key” outcome measures—such as hospitalization, infections and death—for the Dialysis Center of Newington “were in line with other facilities in the state.” While the facility did not meet state and national averages in three measures, “the center has taken efforts to improve these areas to better reflect the overall high quality of care delivered,” Fresenius said, adding that it expects the next Medicare ratings to reflect those efforts.

Fresenius also owns the single facility that in 2014 received just one star: Fresenius Medical Care of Fairfield. That facility improved its rating to three stars, though Medicare scores its rate of hospital readmission as “higher than expected.” The Fairfield facility joins four two-star facilities in 2014 that improved to three stars in the most recent ratings: East Hartford Dialysis Center, FMC of Western Hartford, New Britain General Hospital and UConn Dialysis Center.

Overall, Connecticut scores higher on most quality measures when compared with national averages. It lags in just one area: Children who had enough waste removed from the blood during dialysis that uses the stomach as a filter. The state’s average was 37 percent, compared with 60 percent nationally.

Some groups, including the National Kidney Foundation, warn that patients shouldn’t use the star system as the sole consideration in determining the level of care a facility gives. Many factors, including a patient’s overall health, can affect scores, the foundation writes on its website. The foundation also notes that Medicare used a bell curve in setting its rankings, which means even those centers that score low on the scale might provide good care. Under Medicare’s ratings system, facilities that score in the lowest 10 percent receive one star, while those in the top 10 percent receive five.

C-HIT’s searchable database on dialysis centers can be viewed here.