Arnold Giammarco, the Army and National Guard veteran deported to Italy nearly five years ago, is back home in Connecticut with his wife and daughter.

On May 14, 2011, federal immigration officials stormed Giammarco’s porch as he talked on the phone, ordered him to lie face down, handcuffed him and placed him in detention. The action was long after he had served time, many years earlier, for two 1997 larceny convictions and a 2004 drug conviction. He was detained without bond for 18 months, and sent to Italy on Nov. 26, 2012. 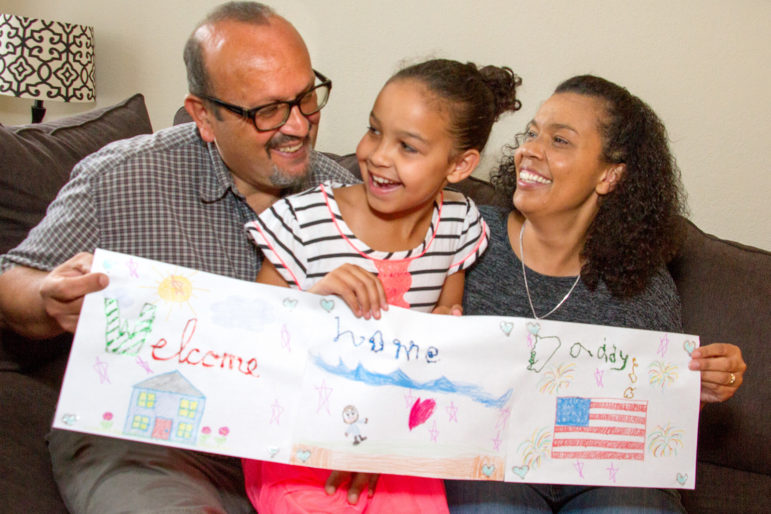 Blair Giammarco, 8, and Sharon Giammarco show the welcome banner they made for Arnold’s homecoming.

Giammarco, 61, served in the U.S. Army and the National Guard as a noncitizen soldier and received honorable discharges. His family left Italy when he was 4 years old and moved to Hartford, where he was raised. He worked mainly as a meat cutter.

His life spiraled downward when he became addicted to drugs. He stole to support his habit and was homeless. After his then-girlfriend, also a drug user, became pregnant, the pair resolved to change their lives. They quit drugs, participated in rehabilitation programs, married, got jobs and made a home for their daughter, Blair, now 8.

C-HIT reported in November 2013 that Giammarco was among a growing number of noncitizen military veterans who were deported for crimes for which they had served time years earlier.

Giammarco landed at JFK Airport on July 16, nine days after he becoming a naturalized U.S. citizen in a military ceremony at the U.S. Embassy in Rome. Giammarco had originally applied for citizenship in 1982 and said the government never processed it. Officials later contended that the application was incomplete.

Giammarco has been living in Campo Di Fano, Italy, his birthplace. He did some caretaking, attended church, helped residents with chores and continued to apply for visas and battle to return to the U.S. Being away from his wife, Sharon, and their daughter was “very disturbing, very upsetting, very traumatic, just a bad experience.”

He credited his homecoming to his wife’s persistence and the Yale Law School clinics that have been working for his return since 2013. They initiated court actions, sought temporary visas, tried unconventional tactics — like attempting to get approval for him to testify before the state legislature — and spent months schooling him via Skype in civics questions in preparation for the citizenship interview. Two Yale students and a faculty member accompanied him to the U.S. Embassy in Rome. “They’ve been doing an excellent job,” Giammarco said, adding, “they brought everything to the table.”

In March, Giammarco’s Yale lawyers, who represented him for free, reached a settlement in a federal court suit that permitted him to submit a new naturalization application and stipulated that the “aggravated felony” for stealing tools, which had been cited by the officers who took him away, would not bar him from obtaining his citizenship. The settlement wasn’t disclosed until after Giammarco returned home.

Giammarco said he felt betrayed by the U.S. government, especially since he served in the military for six years. “I served my country. I served it honorably,” he said. 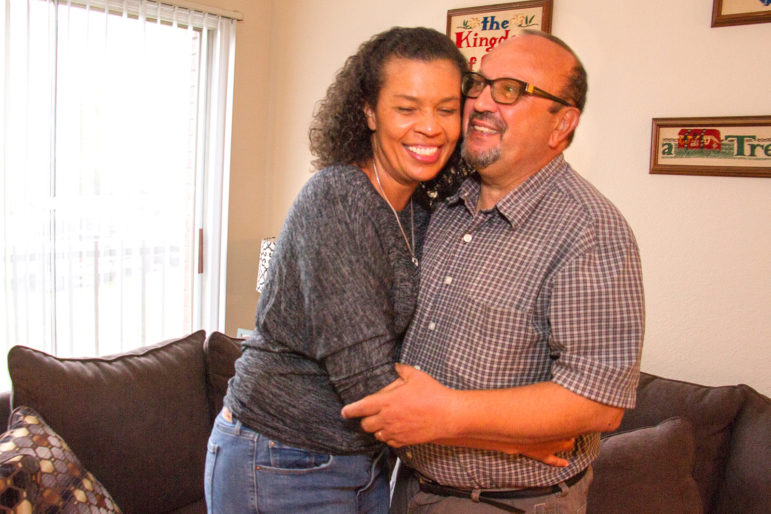 Sharon and Arnold Giammarco hug in their living room in Rocky Hill.

He said he never hurt anyone when he stole to support his drug habit, and he maintained that the government should have taken into account that he had reformed and had been punished for his crimes. He said he believes that immigration officials see people as “numbers” and don’t take their life circumstances into account.

“I changed my life around,” he said. “I never hurt anybody. The only ones I hurt were my wife and daughter, being away from them for so long,” he said as he sat with his wife at their dining room table.

Sharon Giammarco pointed out that she had the same drug and criminal background as her husband, but because she is a citizen, she was able to “restart my life.” She is now an addiction counselor at Blue Hills Hospital in Hartford, working 60 to 70 hours a week.

“He was punished over and over again,” she said of her husband. “I never volunteered to serve my country” as he did.

Now, Arnold Giammarco said, “all we want is a normal family.” He hopes to get a job as a meat cutter. He is spending time with his mother, Elena, 88, who receives hospice care at her Wethersfield home. Because of her health, Giammarco received an “emergency passport,” which was processed quickly. She spent “tens of thousands of dollars” in legal fees to try to get her son back to the U.S. before the Yale clinics took the case, Sharon Giammarco said of her mother-in-law.

Giammarco said he wants to make up for the years lost with his daughter. While he was in Italy, the two had communicated by Skype, and he had tried to do fatherly things like helping with her homework.

The family went camping in Bozrah with relatives last weekend. He is teaching Blair how to swim. They play ball. He made s’mores for her. “It’s cool,” Blair said of her father’s return.

His wife reminded him that being home entails other duties as well, he said with a laugh.

“She showed me where the garbage is and where the broom is,” he said.