The rate of infants dying suddenly and unexpectedly has dropped in recent years, but data show that racial disparities persist. 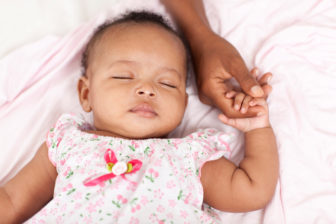 In Connecticut, 22 infants died in 2015. Babies should be placed on their backs to sleep.

Babies born to American Indian and Alaska Natives and African American families suffer much higher rates of sudden unexpected infant deaths (SUID) than other races and ethnicities, data from the Centers for Disease Control and Prevention (CDC) show.

SUID encompasses sudden infant death syndrome, commonly known as SIDS, as well accidental suffocation and strangulation in bed, and other unspecified causes of death in children up to a year old.

Ethnic disparities have been evident for decades but their underlying causes remain unclear, said Dr. Kirsten Bechtel, co-chair of Connecticut’s Child Fatality Review Panel. “That’s the next question to ask,” said Bechtel, who is an associate professor of pediatrics and emergency medicine at Yale School of Medicine.

CDC data provide a national snapshot, but ethnic disparities are present in Connecticut too, said Dr. Eve Colson, a professor of pediatrics at Yale School of Medicine who researches SUID. Across all races and ethnicities, unsafe sleeping habits play a major role in infant deaths, she said.

“I would not rule out a genetic component to this, but I do think we have a ways to go when it comes to sleep safety,” Colson said.

In 2015, the most recent year for which state numbers are available, 22 infants died in Connecticut: seven were classified as SUID, four were from “positional asphyxia,” one from drowning and 10 were from undetermined causes, data from the Office of the Child Advocate show. Of the 22 infant deaths, seven were white, seven were white/Hispanic, six were black, one was Asian/other and one was “other.”

Nationwide, all races saw overall SUID rates fall between 1995 and 2013, the CDC found, due largely to the “Back-to-Sleep” campaign that urges adults to always place infants on their backs to sleep.

There are various reasons parents or caretakers may choose not to put infants on their backs to sleep, Colson said. Some worry babies will choke if placed on their backs, which is untrue. Some are influenced by friends or family. Some have no control over how their children are placed to sleep at places like day care. Others worry about children’s comfort and put pillows or blankets in the cribs, which pose suffocation and strangulation hazards, she added.

“We need to always give a clear message, no matter where the message is coming from,” Colson said. “The baby should always sleep on the back.”

Faith Voswinkel, assistant child advocate at the Office of the Child Advocate, said, “There are so many potential variables” that can contribute to unsafe sleeping habits and produce disparities.

In urban settings that have relatively high rates of violence, for instance, some parents think their infants are safest if they sleep in bed with them, she said. Others struggle to afford safe sleep spaces like bassinets and cribs.

Three main types of influences contribute to a baby’s risk of sudden unexpected death, Bechtel said: developmental, genetic and environmental. With developmental and genetic factors largely uncontrollable, more research needs to be focused on environmental factors that increase certain ethnicities’ risks more than others, she said.

“When an infant dies suddenly, it’s not just in a vacuum. There are other factors,” she said.

Low birth weight, which is more common among black populations than others, can predispose infants to SUID, said Dr. Robert Herzlinger, director of neonatology at the Yale New Haven Children’s Hospital Bridgeport campus.

Other factors, such as exposure to smoking, also can increase infants’ risk of dying unexpectedly, he said.

“All families, regardless of what their race is, need to be educated,” he added.

Some states, including Connecticut, typically no longer label deaths as SIDS, Bechtel said. Developments over the last decade or so have made it easier for medical examiners to determine precise causes of death, she added, and the SIDS classification now is reserved only for cases in which there are no changeable factors that contributed to a death.

“In Connecticut, we really don’t see SIDS anymore,” she said. “Nearly all our cases have modifiable factors.” That, she said, means many of the deaths can be prevented.