Since 2011, Connecticut has issued more than 39,000 new Medicaid cards to prisoners returning to communities, connecting them to health care services with the goal of keeping them healthy and out of prison.

This initiative, which gives ex-offenders the opportunity to see a primary care physician on a regular basis and access critical mental health and drug-abuse treatment programs, exists because of the Affordable Care Act (ACA), and Medicaid pays most of the costs.

Recidivism data show that the initiative is working, state officials say. Yearly, the Court Support Services Division (CSSD) refers approximately 20,000 adults on probation to various behavioral health programs and tracks them for 12 months. In 2016, CSSD reported that 23.1 percent of adults who completed their referral program were rearrested, a five-year low since CSSD started tracking in 2012. For those who dropped out or were kicked out of the program, 41 percent re-offended within 12 months.

But the re-entry health care programs, which rely on generous reimbursements under Medicaid, are in jeopardy, as President Trump and the Republican-controlled Congress continue to discuss plans to replace the ACA and trim Medicaid funding.

In late March, a Republican repeal bill, which would have also converted Medicaid to a block grant program and cut state funding, was pulled from consideration in the House because it did not have the votes for approval. The House speaker announced that the ACA “was the law of the land.” But now, weeks later, replacing the ACA and cutting Medicaid are back on the agenda.

State officials are closely monitoring to see if the new administration will roll back policy changes that have made it easier for the state to connect ex-offenders to health care and drug treatment programs.

And community-based organizations that now bill Medicaid directly for behavioral health services are also worried that funds will disappear, and that former prisoners will be left without health coverage.

“Access to health care plays a critical role” in prisoner re-entry, said Jeff Grant, executive director of Bridgeport non-profit Family ReEntry. “All of these returning citizens who return to the street without adequate wraparound services are going to return to the behavior that got them in trouble in the first place.”

Nationally, studies of similar re-entry initiatives in other states have found that programs that link individuals to a health care system contribute to reduced recidivism. In Connecticut, Gov. Dannel Malloy’s administration credits access to community health services as part of the reason overall recidivism rates dropped slightly, from 32.9 percent in 2011 to 32.4 percent in 2014.

A year ago, community-based mental health providers took a big hit in the state budget, when the state terminated $5.4 million in service contracts.

But following the lead of other states, some providers started billing Medicaid directly for ex-offender treatment—a move they said has allowed them to continue providing services to at least some of their clients. It is that backup plan that is in jeopardy as Congress works to cut Medicaid.

Non-profits such as Central Naugatuck Valley Help, Inc., which operates in Torrington, Danbury and Waterbury, were surprised at the severity of the state cuts. After losing a $1 million contract, Help, Inc. cut staff and employment programs, reduced the size of its space at each of its locations, and shifted behavioral health programming to Medicaid.

“We’ve been trying to hold on by billing Medicaid for the behavioral health services, and it’s challenging.” said Roberta Murtagh, executive director of Help, Inc.

Murtagh said the agency didn’t see a big change in the number of clients in Torrington and Danbury, but in Waterbury the numbers plummeted from 200 clients a year ago to about 70.

Those who get treatment say it is working. Ryan Puzinski, 29, of Torrington, said drug abuse treatment at Help, Inc.’s Watkins Center has helped him stay clean after serving 18 months for selling heroin.

Medicaid pays for Puzinski’s drug-abuse counseling sessions, as well as methadone, urine testing and LogistiCare transportation so he can get to medical appointments.

“I get a lot out of it,” he said. “It’s definitely helped me with identifying my triggers and my issues. Talking to people, hearing peoples’ stories, talking about my issues, getting feedback, stuff like that helps.”

Christina Brague, 42, of Torrington, said the drug-abuse treatment she gets at Help, Inc. through HUSKY D has been a “life saver.”

“It’s been a hard road, but I did it,” said Brague, who is on probation and has been enrolled in the program since September. 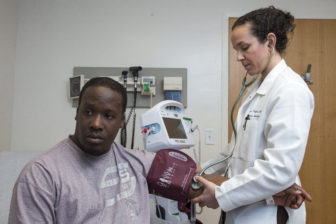 Not all non-profits had the resources to switch to Medicaid. Family ReEntry, which operates in Bridgeport, New Haven and Norwalk, lost its $1.9 million behavioral health state-funded contract. They cut their behavioral health programs but kept employment, housing and mentoring programs.

“A lot of eggs were in the Department of Correction budget basket. We didn’t want to … put all those eggs in a Medicaid basket only to find out that basket will be empty as well,” Grant said.

The Yale New Haven Hospital – Primary Care Center operates Transitions, part of a network of 17 clinics nationwide providing primary care “to promote healthy reintegration, improve health care utilization, and decrease prison recidivism.” The clinic, which has 700 patient visits each year across its two locations in New Haven, is partly funded through grants from the Centers for Medicare & Medicaid Services, a program created under the ACA that Trump’s Health Secretary Tom Price has vowed to eliminate.

“As a society, we tend to put health care on the back burner, but most of these guys never had a primary care physician,” said Jerry Smart, a community health worker for Transitions Clinic in New Haven. “If you get an illness that prevents you from working, how are you supposed to survive? Relapse is just around the corner.

“We are dealing with a population that is coming from an environment that’s plagued with violence, trauma, drugs,” Smart added. “There’s a lot of stress. I tell everybody who comes home, you may look good on the outside but you don’t know what’s going on the inside. Get some blood work, get a physical.”

“Behind bars, it’s like a Motrin for everything,” he said. “When you come home, you start thinking where do I get the things that I need?”

After spending most of his adult life behind bars, Nixon said, he struggled in the outside world with simple things like crossing busy intersections in New Haven.

“It’s great you can go to a place where they know what you’re going through,” he said.

“Transitions is a community. They understand you. They explain everything to you. You walk out with a clearer head about how better to take care of yourself.”

Heidi Lubetkin, vice president of clinical and support services at Community Renewal Team, Inc., in Hartford, said many ex-offenders referred to the agency for mental health and drug abuse treatment were also in need of primary care. The agency connected with the University of Hartford’s Project Horizon to get its clients primary care help from volunteer registered nurses.

Since becoming the first state to expand Medicaid, Connecticut has relied more and more on federal dollars to pay for re-entry services and other programs.

In fiscal year 2017, $3.5 billion in federal Medicaid funds flowed into Connecticut, an increase of nearly $1 billion since the ACA was passed. Much of that increase is due to expanding Medicaid coverage to childless adults, aged 19 to 65, earning up to 138 percent of the federal poverty level, which Connecticut calls Husky D. Currently, 208,113 low-income residents are covered under HUSKY D, up from just 75,000 five years ago.

A significant number of those newly covered individuals are released prisoners. Numbers from the state Department of Social Services (DSS) show that 87.8 percent of new Medicaid sign-ups from January to November last year were HUSKY D. 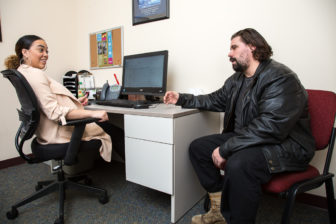 Until now, the federal government picked up 100 percent of costs under HUSKY D, which gave Connecticut a great incentive to sign up released prisoners for Medicaid. The federal share drops to 95 percent this year and notches down every year until it hits 90 percent in 2020. Still, that means Connecticut will pay just $32.1 million in fiscal year 2017 to make sure more than 200,000 low-income residents have health insurance, according to an estimate in the governor’s budget released in February.

According to the governor’s budget, the HUSKY D program will cost an estimated $1.46 billion in 2018. Under current law, the federal government will pick up 94 percent of that ($1.37 billion), while the state will pick up 6 percent ($87.5 million).

But if Republicans succeed in changing Medicaid funding to a block grant program, states would get a lump sum and less than what is given now. According to estimates from the state’s Office of Policy and Management, the GOP’s proposal from March would cut as much as $450 million in fiscal year 2020. This would force the state to make up the difference in funding or cut programs and reduce the number of people served.

A change in Medicaid funding “would shift money back to the state general fund and would likely mean reduction in services,” said Brian Hill, director of research, program analysis, and quality improvement at CSSD. If the state “continues to trim money [for those services] over the years, we don’t have that money sitting in a separate pot ready to supplant the Medicaid funds as they get cut,” Hill said.

“We’re talking about thousands of offenders who wouldn’t be getting the services they need,” Hill said.

“Our goal is less crime. All the things we are doing, we believe, have the effect of reducing crime, and all the data we have show that it’s working,” Lawlor said.

Even after the Republican bill failed in March, Lawlor said, they were still concerned about changes to Medicaid — big and small.

“We have to be on guard with whatever proposals are being made,” he said.

In 2004, the Department of Health & Human Services encouraged states to suspend rather than terminate people on Medicaid when they are imprisoned, something Connecticut does. Lawlor said even without Congress, the new administration could roll back changes like this and add an obstacle for released prisoners getting help they need.

“Right now we’re concerned about the unintended consequences of even relatively minor changes that they could make that would have relatively large consequences,” Lawlor said.

“You could easily reverse all the progress that’s been made with a couple of minor changes to federal law.”