Connecticut has seen significant reductions in deaths from breast and colon cancer in the last three decades, but the state exceeds the national mortality rate for uterine cancer and three other cancers, as well as for mental health and substance use disorders.

An analysis of data compiled by the Institute for Health Metrics and Evaluation at the University of Washington, published in JAMA, also shows wide disparities between Connecticut counties in death rates from certain cancers and other illnesses. Windham County had the highest mortality rates for seven of 10 cancers identified in the study as having the highest disease burden or responsiveness to screening and treatment, including pancreatic, uterine and lung cancer.

Tolland County, meanwhile, had the lowest death rates for five cancers, including breast cancer, while Fairfield County was lowest for four. 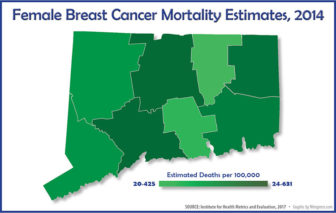 Similarly, deaths from chronic respiratory diseases in Windham County were nearly double the rate in Fairfield County – 63.13 per 100,000, compared to 34.15. Mortality rates for neurological disorders ranged from a low of 75.07 in Tolland County, to a high of 116.89 in Middlesex County. The rates are from 2014.

Experts say the disparities likely stem from a combination of factors, including access to screening and early detection, lifestyle risks, and the availability of treatment options. Windham County has the lowest median household income in the state, while Fairfield has the highest, followed by Tolland, according to 2014 census data.

“It’s quite a complex interaction” that leads to disparities based on socioeconomic factors, said Lou Gonsalves, an epidemiology with the state Department of Public Health (DPH)’s tumor registry. “Things like access to early detection, lifestyle factors such as smoking and obesity, the willingness to interact with medical services” are all elements.

She said DPH is working closely with the Connecticut Cancer Partnership to identify and address disparities “from diagnosis to end-of-life care.”

Patricia Baker, president and CEO of the Connecticut Health Foundation, said that while the state should be pleased with the improvements in health outcomes, “what isn’t surprising is the disparities that exist geographically and racially and ethnically.

“Windham County is often forgotten, yet has some of the most glaring disparities,” she said. “While Connecticut is expanding access, the story often heard in Windham County is the challenge in attracting providers, and income is a large determinant of health.”

Racial and ethnic disparities in mortality remain pronounced in Connecticut, as they do nationally. A 2016 DPH state health profile compiled as part of the Connecticut State Innovation Model (SIM) report shows higher death rates among African-Americans from breast, prostate and colorectal cancer, and higher mortality among Hispanic women for cervical cancer.

Gonsalves said those four cancers are harder to detect early, and so are more likely to be found in later stages.

For non-cancer deaths, Connecticut fares well in the rate of cardiovascular diseases, with the mortality rate dropping by more than 50 percent since 1980 and now below the national average. The death rate for neonatal disorders also has fallen sharply, both in Connecticut and nationally, although the state’s rate remains slightly higher than the national average (3.32).

But in other areas, the study shows, Connecticut has higher mortality than the U.S. as a whole. Deaths from mental health and substance use disorders claimed 14.2 of 100,000 lives in 2014, triple the rate in 1980.

The study shows that Connecticut’s death rate from chronic respiratory diseases also has climbed, as it has nationally — from 34.86 in 1980 to 43.87 in 2014, a 26 percent increase – although it remains below the national average.

Disparities between counties are stark for some cancers and other diseases. Death rates for cervical cancer, for example, ranged from 1.04 per 100,000 in Tolland, to 1.92 in New Haven. For lung, tracheal and bronchus cancers, Windham County’s rate was 53 percent higher than Fairfield County’s.

Breast cancer mortality rates among women ranged from 20.42 in Tolland County to 24.63 in Windham County and 24.56 in New Haven County.

Mental health and substance use disorders claimed 16.45 lives per 100,000 in Hartford, compared to a low of 9.64 deaths in Tolland. Hartford also had the highest rate of deaths from neonatal disorders – 4.33, more than double the lowest rate (2.0) in Litchfield County.

A State Health Assessment from 2014 shows that towns in the eastern part of Connecticut, including Windham County, had higher rates of all-cause premature mortality. It notes that access to health care, including mental health, is a major issue facing the state’s rural population.

Data on life expectancy, dating from 2013, show a two- to three-year longevity gap among counties, with women in Fairfield County living longest (to 84.14 years, on average), and women in Windham County shortest (81.84). Among men, Fairfield County residents had the longest average lifespan (79.99 years), while those in Windham had the shortest (76.58 years).

The study shows that the pattern of change across counties varied by cancer type. For some cancers—such as colon and rectum, larynx, stomach, breast, cervical, prostate and testicular — mortality rates declined in nearly all counties; for others, including liver cancer and mesothelioma, they increased in nearly all counties. For the remaining cancers, rates increased in some counties and declined in others.