State lawmakers are considering a bill that would prohibit licensed professionals from performing conversion therapy on minors, a practice designed to change a person’s sexual orientation or gender identity.

Medical and mental health experts have widely denounced conversion therapy, which also is known as sexual reorientation therapy, as being ineffective and detrimental.

Critics of conversion therapy say it is based on the flawed assumption that homosexuality and bisexuality are sicknesses.

“It’s disgraceful,” said state Rep. Jeffrey Currey, a Democrat representing the 11th House District. Currey introduced the bill along with Democratic Fifth District Sen. Beth Bye. “It may not be as widespread as in other parts of the country [but] we do know it occurs in the state,” he said.

“I was born this way,” Currey said. “Nobody’s kicking the gay out of me.” 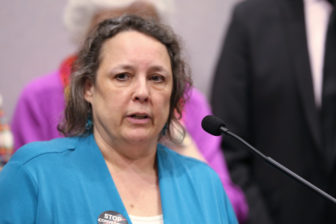 Currey said the bill, which is before the Public Health Committee, focuses on minors because they have increased risk factors. Lesbian, gay, bisexual or transgender (LGBT) youths are more than twice as likely as their heterosexual peers to attempt suicide, according to the U.S. Centers for Disease Control and Prevention.

Mental health providers with close ties to religious institutions and organizations tend to be promoters of conversion therapy, according to the American Psychological Association.

The Connecticut Psychological Association is among the groups supporting the bill, said Traci Cipriano, director of Professional Affairs.

“We are cautious about supporting legislation which specifies which types of therapy can and cannot be practiced, but made an exception in this case because the bill is limited to children and [because of] our concerns about the damage that can be done during childhood and adolescence,” she said. “Not to mention the fact that there is no evidence supporting this type of therapy.”

In some of the most extreme cases, conversion therapy involves shock therapy, though that technique has become less common in recent years, said Janson Wu, executive director of Boston-based GLBTQ Legal Advocates & Defenders, a national legal rights organization that advocates for the LGBTQ community.

“We still hear horrible stories of aversion therapy techniques, whether that’s through psychological priming [a technique to train a person’s memory] or chastising a young child for reaching for a doll instead of a ball,” he said.

Not everyone supports the legislation.

The Family Research Council, a Christian public policy ministry based in Washington, D.C., that “believes homosexual conduct is harmful,” opposes any effort to restrict mental health care “if such restrictions are based solely on the fact that sexual orientation change is a goal of such care,” said Peter Sprigg, senior fellow for policy studies at the group.

“We oppose such bills if they are premised on the claim that such therapy is always or usually harmful to minors,” he said. “We believe it is wrong to place restrictions upon the freedom of clients with unwanted same-sex attractions to seek and obtain help in overcoming those feelings, and we believe it is wrong to restrict the freedom of therapists and counselors to provide such services.”

Peter Wolfgang, executive director of the Connecticut Family Institute, said he’s monitoring the legislation, but not taking a position on it.

“Right now to us this looks like a solution in search of a problem,” Wolfgang said. “This doesn’t exist anywhere in Connecticut.”

He said it’s just a “strong lobby flexing its muscles.”

Supporters of the bill want the practice of conversion therapy banned in Connecticut before it potentially becomes a larger problem here.

“It’s really bunk therapy. There’s really no scientific basis for it,” said Steve Karp, executive director of the National Association of Social Workers’ Connecticut chapter, which supports the bill. “It’s very clear that this is not a therapy meant to assist people or help people, but rather this is a politically based therapy that is harmful.”

“You don’t hear people advertising this,” Karp said, largely because it is so widely criticized. “People who are doing it are probably doing it quietly. But we do think it’s something that’s definitely happening. We need to be proactive.”

In Connecticut and nationally, it’s unclear how widespread conversion therapy is.

The practice is mostly underground on a national level as well, Wu said, making it hard to assess how prevalent it is. A handful of states already have laws banning it among minors, he said, and similar bills are being considered in Massachusetts, Rhode Island and New Hampshire.

“Ultimately, this bill is about keeping young people safe and healthy,” Wu said. “This is really an area where Connecticut can be a leader in protecting the welfare of young people.”

Robin McHaelen, executive director of True Colors, said there are religious organizations in Connecticut who say it’s their goal to convert homosexuals identity, who list licensed professionals willing to offer this type of therapy. The religious organizations would not be impacted by the legislation, but it’s expected to empower the Department of Health to enact penalties to any licensed professional engaging in conversion therapy, according to McHaelen.

The legislation will be among bills discussed at public hearing Tuesday, Currey said. More than 60 lawmakers have signed on as co-sponsors.