A growing number of adolescents in Connecticut and nationwide are protecting themselves from human papillovirus (HPV), new data show, but disparities persist in who is getting vaccinated. 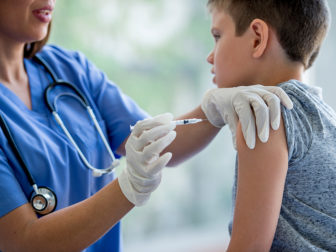 The gender gap is huge, said Dr. Julia Cron, assistant professor of obstetrics and gynecology at Yale School of Medicine and Connecticut section chair of the American Congress of Obstetricians and Gynecologists.

For some parents, the vaccine carries a stigma since it treats a sexually transmitted disease, said Dr. Nimrod Dayan, a pediatrician at Pediatric Healthcare Associates in Trumbull.

“HPV is a unique vaccine in that a lot of parents view it as not required,” he said. “Parents feel like they have the option to say ‘I don’t want it’ and [some] think that it will give their kids free rein to go ahead and have sex.”

Dayan said he explains to parents that if their child contracts HPV, it can lead to cancer. The CDC reports that HPV can cause cervical, vaginal, and penis cancers, among others.

“This is actually a cancer vaccine,” Dayan said. “When it’s framed like that, I seem to have better luck.”

“You really want to get these kids vaccinated before they’re sexually active,” Cron said, since the vaccine is more effective if administered before exposure to the disease.

The new recommendation to get just two vaccine doses should “definitely” increase the percentage of youths who get fully vaccinated, Cron said.

“Certainly, two (doctor) visits are better than three,” she said.

The drop-off could be due partly to logistics, Cron said, since healthy teens typically see their pediatricians only once a year.

Despite some disparities, the state’s 55 percent of females who received all three doses was higher than most states in New England. The exception was Rhode Island, where 68 percent of girls were fully vaccinated, the highest percentage in the country. That’s partly because the state requires all students entering seventh grade to be vaccinated.