When it comes to vaccinating adolescent females against human papillomavirus (HPV), the most common sexually transmitted disease known to be the main cause of cervical cancer, Connecticut boasts a slightly higher participation rate than the national average. 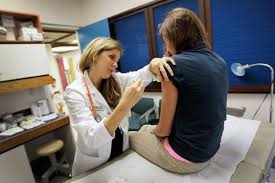 About 58 percent of females in the state received the initial HPV vaccine dose compared with roughly 54 percent nationally, according to the National Immunization Survey, based on data from 2012 for girls aged 13-17.

HPV vaccine is given in three shots and Connecticut has a completion rate of 44 percent, better than the national average of 33 percent, according to the survey.  The U.S. Centers for Disease Control and Prevention recently reported that the number of girls receiving the HPV vaccine nationally lags behind other vaccination rates and has “not moved forward.’’

The state’s rate is “probably due to a combination of factors,” said Linda Niccolai, an associate professor of epidemiology at the Yale School of Public Health and director of the HPV-Impact Project at the Yale Emerging Infections Program. “Health insurance coverage and rates are pretty good in Connecticut, but it’s also possible that providers in Connecticut are more proactive in making sure their patients are vaccinated and parents are more aware of the need for the vaccination.”

The national data show that Hispanic females have the highest participation rate at 63 percent, followed by whites at 51 percent, and blacks at 50 percent.

But the national rate drops to 33 percent for completing shots two and three in the series.  About 35 percent of Hispanics and white females complete the shot series compared with 29 percent of black females.   Data for Connecticut is not available based on ethnicity.

The CDC recommends that the vaccine be given in three shots over a six-month window for girls ages 11 and 12, and for young women ages 13-26, who have not been vaccinated or completed the vaccine series.   The vaccine is also recommended for boys, but the national participation rate is 21 percent.

Shannon Stokley, a researcher with CDC’s Division of Immunization Services, said the six-month recommendation was created because it’s uncertain when teens will start engaging in sexual activity, so delaying completion can be risky. Ideally, females should get the vaccine before they become sexually active and are exposed to HPV, and one dose isn’t enough to give adolescents protection.

Niccolai said that one explanation for the almost equal initiation rates for the vaccine across race could be the federal Vaccines for Children Program, which provides the HPV series to adolescents at no cost. Access to the first shot is most convenient since it’s normally incorporated into a well-child visit at a doctor’s office or clinic. But the second and third shots require additional office visits.

“The access to care that may not be as salient for getting the first dose are probably more salient for doses two and three,” said Niccolai.

Niccolai received a grant from the Yale Cancer Center to initiate a school-based pilot intervention program for HPV vaccination in New Haven targeting minorities and low-income populations to ensure adolescents receive all three shots. The program is in the planning stage. Such programs have been met with success in the UK and Australia, where vaccine completion rates average 85 percent.

“We are definitely struggling with follow-up and I think it would help if it was mandated in schools,” said Dr. Ramindra Walia, chief medical officer at United Community & Family Services in Norwich.

United received a batch of the HPV vaccine from the CDC under the VFC program to give to adolescents who can’t pay for it.  Walia said most patients at United are insured in the state’s HUSKY program, which covers the entire vaccine series. Most private insurance plans cover the vaccine. The out-of-pocket expense for all three shots is about $400, for those not insured or eligible for the VFC program.

Cost aside, many parents hesitate to vaccinate their children over fear that it gives them license to be sexually promiscuous. Others are suspicious of health risks, said Dr. Dara Richards, chief of pediatrics at the Southwest Community Health Center in Bridgeport, which serves a largely Hispanic and low-income population.

Richards said that some parents “are less likely to go online and get educated about the vaccine and ask questions.’’

Most patients at Southwest complete the vaccine series, although it normally takes 12-18 months instead of the recommended six, said Richards. If an adolescent falls behind in completing the series on schedule, they don’t have to start over.

L.J. Tan, chief strategy officer at the Immunization Action Coalition, in St. Paul, Minnesota, said that the initial study results that the vaccine can reduce cervical cancer rates are promising. But, researchers will have to wait at least a decade to gather data on the current immunized population.

According to 2010 data compiled by the CDC, black women have the highest rate of cervical cancer, followed by Hispanics, whites and other minorities.  Black woman and Hispanics are more likely to die from the disease than all other women, the data show.