Connecticut still ranks high among states in the use of antipsychotic drugs for elderly nursing home residents, but its rate of use has dropped 33 percent since 2011 – a bigger decline than the national average — new government data show.

The data released in June by the Centers for Medicare & Medicaid Services (CMS), show that nursing home residents in Connecticut, many with dementia, are still more likely to be given antipsychotics than their counterparts in 31 other states. But the state’s usage has fallen in the last 4 ½ years at a greater rate than the average drop of 27 percent, and it is now about the same as the national average — 17.4 percent. That’s down from 26 percent in 2011.

CMS has been working with states for the past five years to address the overuse of antipsychotic medications in nursing homes. While the drugs are an important treatment for patients with certain mental health conditions, such as schizophrenia, they have potentially fatal side effects when used in elderly patients with dementia. Still, some nursing homes use the drugs “off-label” to calm residents who are agitated or confused.

In Connecticut, Ann Spenard, a vice president of Qualidigm, the state’s Medicare quality improvement consultant, said a statewide effort led by Qualidigm — the Partnership to Improve Dementia Care, part of a national program – has helped to train nursing home staff in alternatives to antipsychotics, while also educating families about how to ask questions about a resident’s medications.

In addition, some homes have put in place “music and memory” programs, funded by the Connecticut Department of Public Health, that have been found to help with agitation and other behavioral health issues related to dementia. 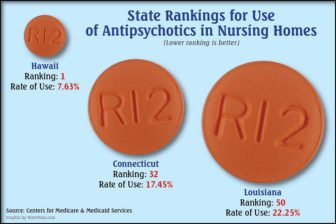 “There’s been a lot of work to reduce (antipsychotic prescribing), and it continues to grow,” said Spenard, who compared the state’s progress to past efforts that reduced the use of physical restraints. “It takes years of purposeful intervention. (But) there’s a real commitment by the long-term care industry to get the rates down.”

The most recent Medicare data show that 35 of the state’s 227 nursing homes, or about 15 percent overall, have antipsychotic use rates for long-stay residents at or exceeding 25 percent, meaning one in four residents is being given the drugs for unapproved reasons.

Meanwhile, 23 homes have antipsychotic use rates of less than 10 percent. Four have rates under 5 percent: Touchpoints at Bloomfield, Hughes Health & Rehabilitation in West Hartford, Pilgrim Manor in Cromwell, and Curtis Home – St. Elizabeth Center in Meriden.

At Touchpoints, administrator Jaime Faucher attributed the low rate of antipsychotic use to the home’s “evolving range of services,” especially post-acute and rehabilitative care.

“When a short-term resident comes into the facility with a prescribed antipsychotic medication, our treatment team often finds these medications are unnecessary and unsupported with a diagnosis,” Faucher said.

He said the staff of Touchpoints receives ongoing training in non-pharmacological interventions and individualized recreation activities and makes use of the “music and memory” programming.

Nursing homes were required to start publicly reporting their use of antipsychotics in 2012 – a requirement that advocates of Medicare transparency say has helped to bring down rates.

CMS, working with providers and advocacy groups, had set a goal of a 25-percent reduction in antipsychotic use among long-stay residents by the end of 2015. The new report says that goal was met, and it singles out Utah and Vermont for the most significant reductions (41.7 percent and 36.1 percent, respectively).

Hawaii, Wyoming and New Jersey now have the lowest usage rates, while Louisiana, Illinois and Mississippi have the highest.

Among New England states, Vermont has the lowest prevalence rate (16.2 percent), while Massachusetts has the highest (18.9 percent).

Other CMS data show that Connecticut has a relatively high rate nationally in terms of the number of days that nursing home residents received antipsychotics over a snapshot seven-day period. More than 20 percent of residents received the drugs for the full seven days – a higher rate than 38 other states, according to the data.

Spenard said Qualidigm, elder care providers and state officials are committed to further reducing Connecticut’s rate of antipsychotic usage – although she added, “We don’t really know what the appropriate rate is… There will always be some people who need the medications,” which are approved to treat schizophrenia, Huntington’s disease and select other illnesses.

The CMS report notes a slight increase in the percentage of nursing home residents nationally diagnosed with schizophrenia. The report says the agency is exploring potential consequences of the crackdown on antipsychotics, including “prescribing shifts… to anxiolytics or sedative/hypnotics.”