This year 97 percent of blacklegged ticks, commonly known as deer ticks, survived the Connecticut winter and are hungry for blood as temperatures warm.

These arachnids transmit bacteria that cause Lyme disease and are likely thriving in your backyard, according to Connecticut Chief Entomologist Kirby Stafford.

About 3,000 cases of Lyme disease are reported in the state each year, the state Department of Public Health reports, but Stafford says that most cases aren’t reported. The true number is closer to 35,000, he estimates. “Under-reporting is more likely to occur in highly endemic [widespread] areas, whereas over-reporting is more likely to occur in non-endemic areas,” according to the Centers for Disease Control and Prevention.

Chief Entomologist Kirby Stafford discusses Lyme disease and ways to avoid it in our podcast, the Workup with Colleen Shaddox.

Connecticut is definitely a highly endemic area. In 2015, more than 2,500 Lyme disease cases were reported statewide, with infection rates the highest in Windham, New London and Middlesex counties. Nationally, 96 percent of Lyme cases occur in just 14 states, including Connecticut.

People can and do catch Lyme disease year-round in the state, but most cases occur in June and July, when people spend more time outdoors. During the summer season, young, or nymphal, deer ticks, so small they are difficult to detect, are out in force.

But you can protect yourself by knowing more about ticks and how they spread disease.

A study of Lyme infection in Connecticut found that nearly half the offending tick bites happened while the victim was playing outside, making children the group most at risk for Lyme disease. Many others were doing yard work or gardening when the infection occurred. Hiking was a relatively infrequent contact activity, the study said. The danger is not in the woods so much as in your backyard.

Stafford recommends moving children’s play equipment away from wooded or brushy areas frequented by ticks. That may also mean paying more attention to sun protection as the sandbox comes out from under the tree. Kids should be checked, head to toe, for ticks after outdoor play.

Ticks are “vectors,” scientists say. Deer ticks don’t have Lyme disease, but they feed off creatures that carry the disease. When they bite a human, they can transmit the disease. Taking measures to keep the animals ticks feed on, like deer and mice, away from your home is also a good way to avoid Lyme.

Only deer ticks carry Lyme, and only about half the deer ticks found in Connecticut are carriers. Even if an infected tick bites you, transmission takes some time. If you remove the tick within 24 hours, your risk of infection is zero. Checking yourself and your kids after being outside is an effective way to prevent the disease from developing.

• Ticks should be removed promptly and correctly. 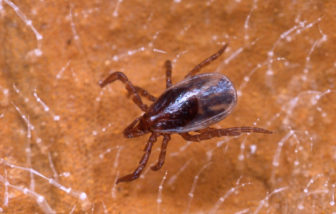 The Internet is full of suggestions about how to remove ticks, such as smothering them with petroleum jelly or holding a hot match to them. Both can actually drive the tick deeper. Devices marketed as tick removers vary in reliability and are often designed to remove large ticks. In the summer you are most likely to pick up young deer ticks, about the size of a poppy seed. Thin tweezers are your best bet. Clean the area with alcohol after removing the tick.

Putting clothes in the dryer on high heat for one hour will kill any ticks hiding there.

The circular red rash associated with Lyme only occurs in 70 to 80 percent of cases. Unfortunately, other early Lyme symptoms, like fever, headache, and muscle and joint pain, are common in many illnesses, making diagnosis difficult. There are blood tests available for Lyme, which are done in two stages. Some providers skip the first stage, however the CDC recommends against this as incomplete testing can lead to false positives. Tests will usually be negative in the first few weeks of the infection.

Connecticut residents who remove embedded ticks may send them to their local health departments for free testing to see if they carry bacteria that cause Lyme.

• Ticks can be kept down with insecticides, repellents and your trusty weed whacker.

The Connecticut Agricultural Experiment Station recommends using a repellent or insecticide on your clothes or person to keep ticks away and offers a factsheet on the relative benefits of different products. There are a number of other measures you can take to protect yourself. For example, you can tuck your pants into your socks. Ticks latch on close to the ground and quickly climb up your body to find a comfortable spot. Tucking a pant leg cuts off their route. Or you can trim back that shady border. Ticks hate sunlight.