Blacks and Hispanics are less likely than whites to get flu vaccines, have a preventive health care visit, or receive follow-up care after being hospitalized for a mental health disorder, according to a first-of-its kind federal report that looks at health disparities among people on Medicare Advantage plans.

“While these data do not tell us why differences exist, they show where we have problems and can help spur efforts to understand what can be done to reduce or eliminate these differences, ” said Dr. Cara James, director of the Centers for Medicare & Medicaid Services (CMS) Office of Minority Health, which released the report.

The report looks at 27 clinical care measures and eight patient experiences to gauge differences in treatment among whites, blacks, Hispanics, and Asians or Pacific Islanders. 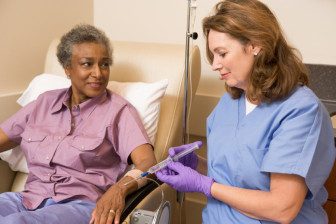 It has some bright spots: Blacks and Hispanics reported slightly better communication with doctors than whites did. Hispanics had higher rates than non-Hispanic whites of colorectal screenings, blood sugar testing for diabetes, and treatment for osteoporosis (among women) after a fracture.

Elderly black patients with dementia were less likely to be put on antipsychotics, benzodiazepines or other potentially harmful medications than whites.

But the bulk of the report shows disparities in clinical care by race and ethnicity. Whites reported an easier time getting the prescription drugs they needed than either blacks or Hispanics. Blacks and Hispanics with diabetes were less likely to have their blood sugar under control than whites were—63.9 percent of black patients and 69.3 percent of Hispanics, compared to 71.2 percent of whites.

In the area of mental health, white patients diagnosed with a new episode of major depression were more likely (70.4 percent) to remain on antidepressant medications for at least 84 days than were Hispanics (57.6 percent), blacks (56.9 percent) or Asians or Pacific Islanders (64.3 percent). Thirty-five percent of whites hospitalized for a mental health disorder had an outpatient visit or partial hospitalization within seven days of discharge, compared to just 25 percent of blacks and 34.9 percent of Hispanics.

Overall, whites reported getting appointments and care more quickly than did blacks, Hispanics or Asians or Pacific Islanders.

In several clinical categories, including screening for colorectal cancer and adequate control of hypertension, Asians and Pacific Islanders received care that was similar to or better than the care received by whites, the data show.

At the Hispanic Health Council, Sandra Sapere, associate director of the risk reduction unit, said she was not surprised by the ongoing disparities, especially involving access to care.

“With Latinos, usually in my experience, they don’t go to preventive care. They’re more likely to go to the ER,” she said. “Some of it is about education, and some is about access to care.”

Pat Baker, president and CEO of the Connecticut Health Foundation, also said the federal report’s findings were not surprising.

“Connecticut sees these disparities as well, but our access to such strong data is limited,” she said.

She said Medicare has put a strong emphasis on accountability and quality measurement, “which is critical in improving outcomes which may contribute to (a narrowing of disparities).” But she noted, “The difficulty is that this is 2014 data, so it is very hard for providers to improve performance unless they get real-time data.”

The data are based on two sources of information: The Healthcare Effectiveness Data and Information Set (HEDIS), which collects information from medical records and administrative data on how well the needs of Medicare beneficiaries are met for a variety of medical issues; and the Medicare Consumer Assessment of Healthcare Providers and Systems Survey, which is conducted annually by CMS.