A new policy brief by the Child Health and Development Institute says the best way to fight numbers like these is to “require action in a child’s earliest years — from birth to 2.” The numbers also indicate that 25 percent of all white kindergartners are overweight or obese also.

“The numbers are staggering, and the health implications are so big,” said Judith Meyers, president and CEO of the Farmington-based CHDI, whose brief is based, in part, on research by UConn’s Rudd Center for Food Policy & Obesity.

“Connecticut’s rates [of childhood obesity] are among the highest in the country,” she said. 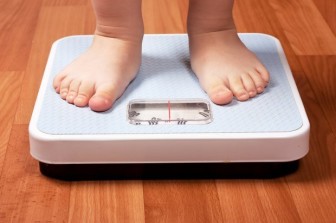 One of every three kindergartners is overweight or obese, a CHDI study reports.

Other recent studies show that the state is among the bottom in terms of enacting effective policies on preventing childhood obesity.

Meyers noted that according to pediatricians, once children as young as 2 start developing fat cells, it’s very hard to turn that around as the children grow, which is why prevention is key.

Being overweight or obese during childhood often leads to obesity during adulthood, says CHDI, and this can cause a host of serious illnesses, including heart disease, Type 2 diabetes and asthma. Despite high-profile efforts, such as Michelle Obama’s Let’s Move obesity remains a major public health issue, costing taxpayers hundreds of millions of dollars a year.

Two efforts to confront this epidemic are underway in Connecticut, including a legislative bill, voted out of the Committee on Children, that would impose dietary restrictions and minimum physical activity requirements on child care centers, preschools and elementary schools. Connecticut currently has recommendations in these areas, not mandates.

The second step is today’s release by the CHDI of five recommendations aimed at preventing childhood obesity:

• Increase support of breast-feeding in hospitals, day care centers and group child-care homes, including to stop the practice of providing infant formula in hospital gift bags to new mothers;

• Require day care centers to serve only breast milk or infant formula to children under 11 months, and to serve breast milk, unflavored whole milk, water and no more than 4 ounces of 100% fruit juice a day to children 12 months to 2 years old;

• Provide infants and toddlers with minimum times to be physically active every day; and,

• “Protect” all younger children from “screen time,” including to never permit a baby or toddler “to passively watch a television, computer, mobile phone, or other screen that older children in the same room are watching.”

Public health policy consultant Roberta Friedman, who researched and wrote the Rudd Center report, said she studied what states across the country have done to help reduce childhood obesity. None, she said, have acted on the five recommendations CHDI is proposing. Were Connecticut to do so, it would be a leader in the field.

Several of CHDI’s recommendations dovetail with the bill’s requirements.

Perhaps the most important part of the proposed legislation is requiring physical activity among young schoolchildren, said Rep. Diana Urban, D-North Stonington, co-chairwoman of the Committee on Children.

“I was stunned to learn that 39 elementary schools don’t have recess,” she said.