Tens of thousands of Connecticut infants and toddlers are at risk for social and emotional problems, and the professionals who interact with them most need mental health training in order to help them, according to a report released this week.

Children who live in poverty, are homeless or have suffered abuse or neglect are among those most likely to experience trauma at a young age, according to the report by the Child Health and Development Institute (CHDI) of Connecticut, and the key to helping them is providing the right support.

“There is a tremendous opportunity to improve children’s lives by promoting a child’s secure attachment with a caregiver from the beginning,” said Judith Meyers, a psychologist and president and CEO of CHDI. “Professionals who care for young children are in the unique position to help families develop nurturing relationships.”

The nonprofit institute suggests that all doctors, teachers, early care providers and others who work with infants and toddlers in Connecticut be trained in infant mental health. 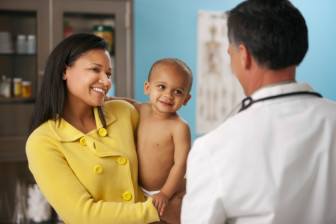 Helping children process and cope with trauma early is essential to their future success, said Melissa Mendez, co-lead author of the report and associate director of early childhood at the Wheeler Clinic in Plainville. The clinic provides mental health and other services to families and individuals.

Trauma affects children in multiple ways, she said. It can impair social-emotional development; has been linked to diabetes, obesity and other health concerns later in life; and children who experience trauma in their family lives often fall behind academically because they are unable to concentrate in school, she said.

Throughout Connecticut, efforts are under way to educate those who work with young children about infant mental health. So far, 500 professionals statewide have received training on the topic from the Connecticut Association for Infant Mental Health. That training has been given through partnerships with CHDI, Early Head Start, the state Office of Early Childhood, the state Department of Children and Families, Birth to Three, and Elm City Project Launch.

The training teaches participants how young brains work; why it is so important for children to have relationships with caring, nurturing adults; and what can happen when those relationships are missing and a child experiences trauma, according to Mendez.

“We do have significant incidents of trauma in the state,” she said. “We really need to help providers understand what the impact of trauma can be on those very young children on their development.”

The training has been eye-opening for many, Mendez said.

“This training supports teachers, home visitors, clinicians, child welfare workers, nurses and others in their work with very young children and their families by bringing an infant mental health framework that identifies safe and healthy relationships as the key component to healthy infants and toddlers,” Mendez said.

In addition to the training, the Connecticut Association for Infant Mental Health has adapted a training and credentialing system from a similar association in Michigan, and 53 Connecticut professionals have earned or are on their way to earning the group’s endorsement.

Those who are trained have the potential to impact tens of thousands of young children, according to CHDI. The report found, based on data over the past few years, that the children most at risk of facing social or emotional concerns include:

• 79,089 Connecticut children under age 6 who live in low-income households, a disproportionate number of whom are black or Hispanic.

• 5,034 infants and toddlers who were eligible for Birth to Three programs due to developmental delays or disabilities in 2014.

The report includes several recommendations from CHDI, including that all professionals who work with young children be required to undergo infant mental health training; and those who work in public sector programs serving vulnerable populations to have access to training specialists.

The Office of Early Childhood provided funding for the CHDI report as part of its effort to promote an early childhood workforce skilled in infant mental health.