When the American Cancer Society announced new guidelines for mammograms a week ago, the response on the organization’s Facebook page was swift.

“For adoptees, this just adds 5 more years of potential unknowing,” wrote Angela from Connecticut. “Without a medical history, we are denied mammograms through insurance carriers.”

And then Dr. Henry Jacobs, a Hartford area longtime OB-GYN who, among other duties, serves as the Connecticut State Medical Society president, took to Facebook, too, and posted a message that summarized the general rage: “It is clear that rationing care is the new sales pitch and sacrificing women that could live out their lives is considered acceptable. I think it is UNCONSCIONABLE!!!!!!! We can afford athletes, entertainers, CEOs, hedge fund scammers that make upwards of a 100 million $$$$$ a year, but we can’t provide decent medical care to people??? Really????????”

Indeed. Women who pay attention to their own health may be feeling a sense of whiplash from recent pronouncements. Since 2003, the American Cancer Society has suggested women of average risk of getting breast cancer get mammograms every year once they turn 40, as well as regular breast exams by their doctors. This was among some of the most aggressive guidelines of all the entities who issue screening guidelines. Last week, the 102-year old organization published new guidelines in JAMA: The Journal of the American Medical Association that suggested annual mammograms start for women at age 45, continue once a year until age 54, and then be reduced to every other year.

Both young and old women were angry to find that they now fall outside the guidelines for screening.

A similar tempest occurred in 2009 when the volunteer U.S. Preventive Services Task Force suggested an even later start for mammograms—age 50. At the time, discussion centered around whether it’s good practice to suggest the majority of women between the ages of 40 and 49 not seek screening. A recent attempt by that organization to clarify the guidelines did not impress the people at the American College of Radiology, which said in a statement that “adoption of draft United States Preventive Services Task Force (USPSTF) breast cancer screening recommendations would result in thousands of additional and unnecessary breast cancer deaths each year.” 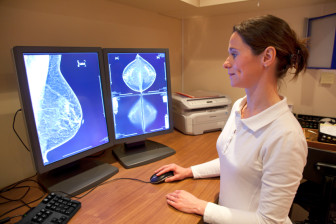 Both guidelines were issued, said the society and the task force — after rigorous review of data, though how much data exists for outcomes for significantly older woman is another question entirely. So how can two entities consulting the same science have such different ideas of what constitutes good preventive care for women?

According to the American Cancer Society, this year;

• Roughly 231,840 women will be diagnosed with invasive breast cancer.

• Another 60,290 women will be diagnosed with cases of carcinoma in situ—non-invasive cancer.

Those are significant numbers. While researchers don’t necessarily know what causes breast cancer, which would—to me—render that a pressing topic, we do know that some women have inherited risk factors, and others seem to acquire those factors along the way. (Men can get breast cancer, too, but the rate of breast cancer deaths among men is roughly a hundredth that among women.)

Such rotating pronouncements can ruin—or end—lives, says Jacobs. Since entering practice in 1977, Jacobs has treated plenty of women who fall outside the most recent target ages for regular screenings, including a 17-year-old woman with advanced breast cancer. He lost an aunt who developed breast cancer in her 80s—also past the time of most recommendations for screening. Women who pay attention to these latest guidelines may be putting themselves at risk, and for what?

“Are you going to write these women off?” asks Jacobs.