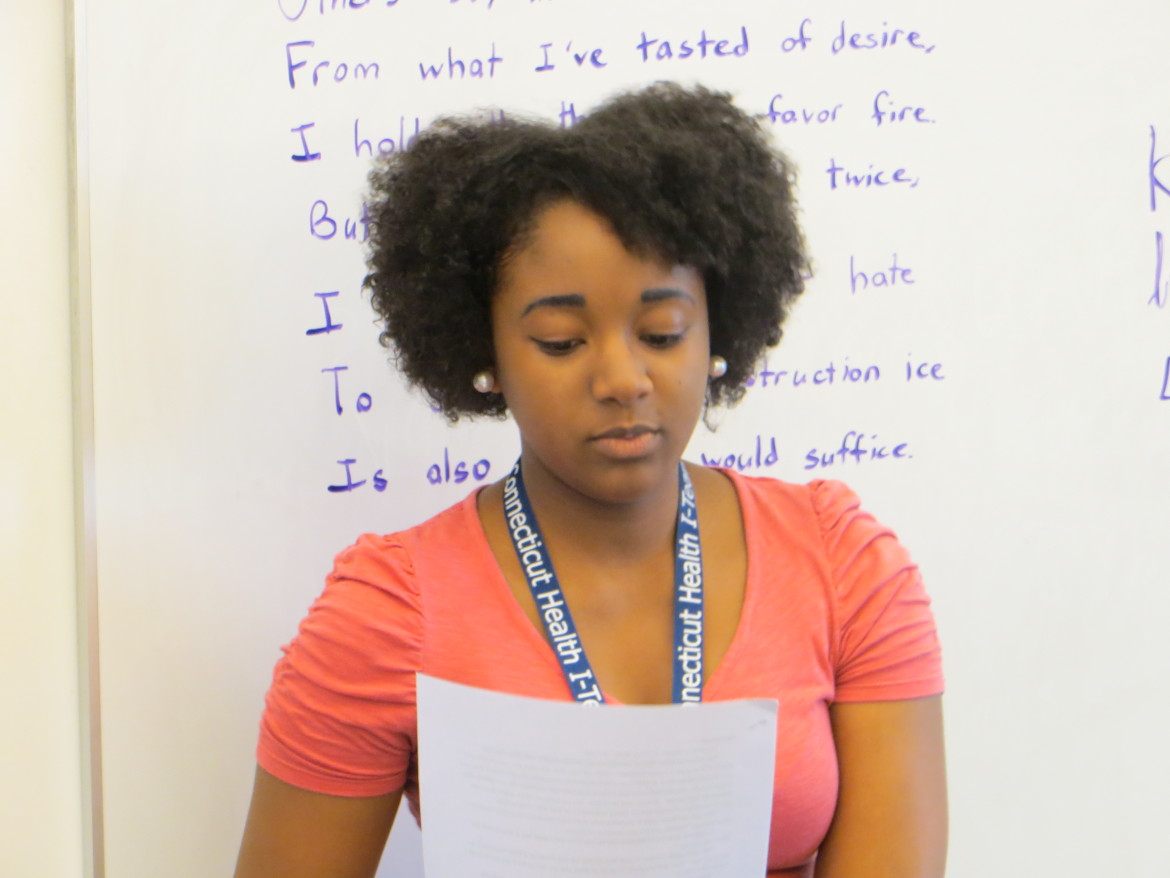 In an emerging national trend, the African-American community is transitioning from relaxed hair to natural hair. “Relaxers represent 21 percent of the black hair care market, with expenditures at $152 million, down 15 percent since 2011 due to the natural hair trend,” Antonia Opiah wrote in The Huffington Post.

Some women and girls, such as Kadejah Gamble, 17, of Hartford, say they are making the switch because they are concerned about the damage the harsh relaxant chemicals were doing to their hair.

“My hair was getting too thin, and my hair was falling out,” she said. “I was going to look like a rat.”

Perming hair has been prevalent since 1905 and involves the use of chemicals or heat applied to hair. Badly done perms can result in breakage, loss of normal elasticity, brittle hair and fragile hair.

Gamble said that she has had her hair relaxed since she was in elementary school.

She recently decided to transition her hair from relaxed to natural.

“It was rough at first, and I’m not used to having ‘nappy’ hair because I’m used to dealing with my relaxed hair,” she said. “It was easy for me to comb it and put it up with the relaxer. Now that I’m natural, I have to [twist my hair into] bantu knots to make my hair come out with the right curls.”

Many African American women are unaware of the damages that relaxers can do to their hair, Sitinga Kachipande, a blogger, said. Black hair care products (relaxers in particular), have been linked to ailments such as reproductive problems, fibroids, heart disease, cognitive disorders, cancers, early puberty, altered immune systems and other health risks, Kachipande has written.

A 2012 Boston University study found that black women who use hair relaxers are at slightly higher risk of developing uterine fibroids. These are non-cancerous tumors that grow in the wall of the uterus that can cause heavy bleeding, painful periods and are a leading cause of hysterectomies.

Dr. Carol Hogue, who is a professor of epidemiology at Emory University’s Rollins School of Public Health, reports that the link between hair relaxers and fibroids is not very strong.

“There is an impact. It is very small,” she told FoxAtlanta.com.

The chemicals in the relaxers can permanently damage healthy hair. One important chemical in relaxers is sodium hydroxide, which can burn skin, and many are unaware that it is used in cleaning products. In addition to sodium hydroxide, ammonium thioglycolate is also used in hair relaxers. This product makes hair follicles permeable and eliminates the curl pattern, thus making the hair straight.

Women, such as Gamble, may not know about the actual chemicals they are putting in their hair and are mainly concerned with their hair being straight.

“The box said that it helps to straighten roots and I didn’t know that the relaxer could do a lot of damage,” Gamble said her misconception of relaxers.

Cymphonie Yaw, 16, of Hartford, said she has never had a perm and is in love with her thick, natural hair.

“My mom taught me how to work with my hair the way it was, so it wasn’t necessary for me to get one, “ Yaw said of a perm. “I can do so much with my hair, and it’s just fun because I can do a lot with it.”

Some girls, like Yaw, know that using relaxers may make their hair limp and brittle.

“My hair would be lifeless,” she said.

Megan Hopkins is a student at the From the Heart of the Christian School, Great Mills, Maryland.