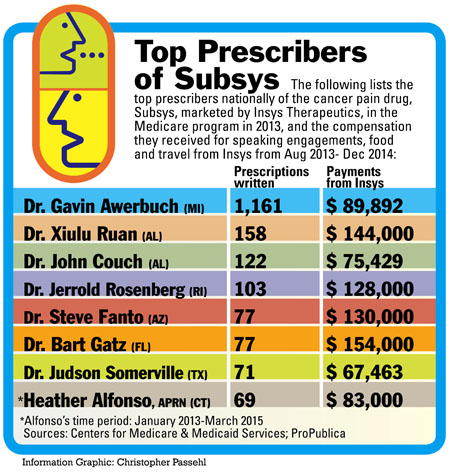 Eight of the top 10 prescribers of a potent narcotic used for cancer pain were paid more than $870,000 in speaking fees by the drug maker in 2013 and 2014 — indicating that Derby nurse Heather Alfonso was not the only high prescriber compensated by the company.

Alfonso, an advanced practice registered nurse (APRN) who worked at the Comprehensive Pain and Headache Treatment Center in Derby, pleaded guilty last month to accepting $83,000 in kickbacks from 2013 to March 2015 from the drug company Insys Therapeutics, which has heavily marketed a painkiller called Subsys, a sublingual fentanyl spray approved only for cancer patients. Alfonso was paid to speak about Subsys at more than 70 “dinner programs,” but most of those programs were attended only by her and a sales representative for Insys, or by Alfonso’s colleagues and friends who had no authority to prescribe the drug, according to the U.S. Attorney’s Office for Connecticut.

Alfonso faces a maximum prison term of five years and a fine of up to $250,000 on the charge of receiving kickbacks in connection with a federal healthcare program. In pleading guilty, she admitted that the money she was paid influenced her prescribing of Subsys, often to non-cancer patients, federal investigators said.

A review of federal Medicare prescribing data and drug company payment records shows that at least eight of the 10 highest prescribers of Subsys in the Medicare program in 2013 were also paid by Insys for speaking engagements in 2013 and 2014. All of the eight except Alfonso are physicians. The two prescribers in the top 10 who do not show up as receiving Insys payments are not included in the federal Open Payments database because they are physician assistants.

Alfonso is the only paid speaker for Insys who has been charged with taking kickbacks, and there is no evidence that other speakers did the same. The company confirmed in December 2013 that it was under federal investigation related to its sales and marketing of Subsys, and said it was cooperating in the probe.

Insys representatives did not return messages seeking comment. The company has previously denied any wrongdoing in its marketing of Subsys.

Federal investigators said that Alfonso was paid by Insys as a speaker at a rate of about $1,000 per event. Drug company payment disclosures show that other Insys speakers earned $3,000 or more for each speaking engagement.

Gatz, of Florida, received speaking fees ranging from $1,500 to $4,700 that grew in frequency throughout 2014. In October, he received 10 payments totaling more than $30,000, indicating that he was speaking two or three times every week.

Gatz and Rosenberg could not be reached for comment. Rosenberg was reprimanded last September by the Rhode Island Board of Medical Licensure and Discipline for prescribing Subsys to patients “off-label” for reasons other than cancer pain, without properly documenting the reasons.

Drug companies have paid physicians as speakers for decades, and there is nothing illegal about a doctor who prescribes a certain drug accepting money from a company to speak about that drug. The arrangement becomes a kickback when the physician’s prescribing is directly influenced or rewarded by the payments.

“You’re always going to have the chicken-and-egg problem” in such speaker arrangements, said Dr. Joseph Ross, an associate professor of medicine at Yale School of Medicine, who has written about the industry’s influence on physicians. “Is the company approaching doctors because they prescribe the drug, or are the doctors prescribing the drugs” they speak about?

Ross believes that physicians who give talks about medications to their peers should not be compensated by the companies that make those drugs.

“When you’re talking about educational programs for physicians, you want an objective, measured assessment,” he said. “There are plenty of doctors who give talks like this, based on the evidence, who have no conflicts. They’re called ‘conflict-free’ speakers.”

Ross said he was surprised by the case involving Alfonso – not so much because she admitted accepting kickbacks, but because her high prescribing of Schedule II narcotics, including the fentanyl in Subsys, went unnoticed for so long. A February story by C-HIT had raised questions about Alfonso’s standing as one of the top 10 Medicare prescribers — nationally — of Schedule II drugs in 2012.

“It’s pretty shocking to me that someone – a nurse in Derby, Connecticut – could be accountable for so many prescriptions,” Ross said.

The top prescriber of Subsys in the Medicare program was Dr. Gavin Awerbuch of Michigan, who billed Medicare for $7 million for the drug from 2009 to February 2014— writing more than six times the number of prescriptions than the next higher prescriber. He was arrested in May 2014 on charges of health care fraud and illegal distribution of controlled substances. The criminal complaint against him charges that he prescribed Subsys “outside the scope of legitimate medical practice and for no legitimate medical purpose.” He also was charged with billing Medicare for tests he didn’t conduct.

Two other top prescribers of Subsys – Drs. Xiulu Ruan and John Couch of Mobile, Alabama, who own a pain specialty practice — were indicted in April 2015 for prescribing controlled substances, such as Oxycodone and morphine, outside the usual scope of professional practice and not for a legitimate medical purpose, and conspiracy to commit healthcare fraud. The indictment does not mention Subsys.

A complaint filed in U.S. District Court in Texas in 2012 by a former salesman for Insys, Ray Furchak, alleged that the company used its speaker program to “induce” or “reward” prescription writing by doctors. The Department of Justice opted not to join Furchak’s suit and he withdrew it in 2013.

In Connecticut, Alfonso was the highest Subsys prescriber by far, writing out more than $1 million in Subsys prescriptions in the two years between January 2013 and March 2015, according to the U.S. Attorney’s office. In 2013, she wrote out 69 prescriptions for Subsys to Medicare patients, at a cost of $239,000, federal records show.

Subsys is an expensive, highly addictive drug approved by the Food and Drug Administration in 2012 for the treatment of breakthrough cancer pain. So far, at least 63 people have died of complications from the drug, according to an analysis of FDA adverse event reports commissioned by the Southern Investigative Reporting Foundation.

One thought on “Highest Prescribers Of Cancer Drug Paid As Speakers”