People addicted to drugs such as heroin, morphine and prescription pain medicine who receive treatment with medication in hospital emergency departments fare better than those who are merely referred to treatment services, according to new research from the Yale School of Medicine.

Researchers have conducted the first known random trial comparing three treatment strategies for people dependent on opioids who seek emergency care. The opioids include hydrocodone and oxycodone, in addition to heroin and morphine.

Among the more than 300 people in the trial, patients in emergency departments who received buprenorphine, a medication that reduces opioid cravings, had greater success than those treated in other ways, researchers found.

Opioid addicts often seek care in hospital emergency departments for overdoses or other issues, according to researchers. Once they receive that emergency care, they usually receive referrals for addiction treatment.

“The patients who received ED-initiated medication and referral for ongoing treatment in primary care were twice as likely than the others to be engaged in treatment 30 days later,” Dr. Gail D’Onofrio, chairwoman of emergency medicine at Yale School of Medicine, said. “They were less likely to use illicit opioids of any kind.” 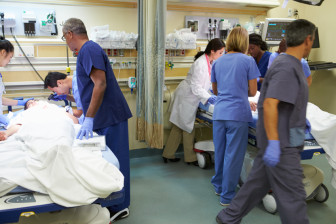 In the study, opioid-dependent participants who came to Yale-New Haven Hospital’s emergency department between April 2009 and June 2013 were split into three groups: one group received a list of treatment services; another received a “motivational consultation” and referral, and the third received a “brief intervention” and treatment with buprenorphine that subsequently was continued with their primary care doctors.

Those who received the medication from the hospital also were less likely than others to need inpatient treatment at a residential facility, according to Dr. David Fiellin, a professor of medicine at Yale who co-led the Yale team with D’Onofrio and oversaw participants’ ongoing buprenorphine treatment in primary care.

Previous research at Yale has found buprenorphine to be effective when used in primary care, but this study aimed to expand the reach of the treatment into emergency departments, according to Dr. Patrick O’Connor, professor of medicine and chief of general internal medicine at Yale.

“Effectively linking ED-initiated buprenorphine treatment to ongoing treatment in primary care represents an exciting new model for engaging patients who are dependent on opioids into state-of-the-art care,” he said in a statement.

The findings should be confirmed in other emergency departments, researchers say, but are encouraging.

“This really represents a new paradigm,” D’Onofrio said, noting that emergency departments typically treat other chronic diseases, such as high blood pressure and asthma, with medication that is then continued in primary care.

“For addiction, we’ve never done that,” she said. “That’s what’s really exciting to me.”

Reaching addicts in emergency departments is crucial, she said.

“That’s where the patients are,” she said. “And otherwise it will be a revolving door.”

Emergency department treatment has the potential to prevent additional ED visits as well as deaths, she said.

“There’s been a tremendous rise in opioid dependence and overdoses,” D’Onofrio said. “It’s an incredible epidemic. We know that treatment does work, but we have to get people into treatment and that’s the hardest part.”